A Retail Shop That Sells—Digital Typefaces?

By Stephanie Orma
Can the process of buying digital typefaces be any less inspired? There’s just nothing inherently exciting, creative or cool about it. You purchase, download and install. Whoop-de-do. Sure, online font shops are an undeniably fantastic resource for designers, but for something that’s purchased so often by so many creative folks specifically for creative purposes, you’d think someone would’ve tapped into all that creative consumerism (and passion for typography!) by now.

Well, Denmark-based design agency, e-Types, has done just that. Along with Web sites, identities, package design and an array of other services, for over twenty years e-Types has been creating custom typefaces for such high-profile clients as the Royal Danish Theatre, the National Gallery of Denmark and the Danish Broadcasting Network, among others. Finally ready to commercialize their house-made collection of more than one hundred typefaces, e-Types launched their own online type foundry—Playtype.com—late last year, but unlike other Web-based font shops, they didn’t stop there.

“Playtype.com makes money 24-hours a day and the products are always available,” explains Rasmus Drucker Ibfelt, partner and managing director of e-Types. “But making a Web site with online typeface sales just isn’t that sexy. I mean it’s just a Web site selling typefaces, how cool is that? That’s not cool." The designers knew if they were going to make any real impact in this “passionate but nerdy type business” they were going to have to be totally innovative in their marketing. 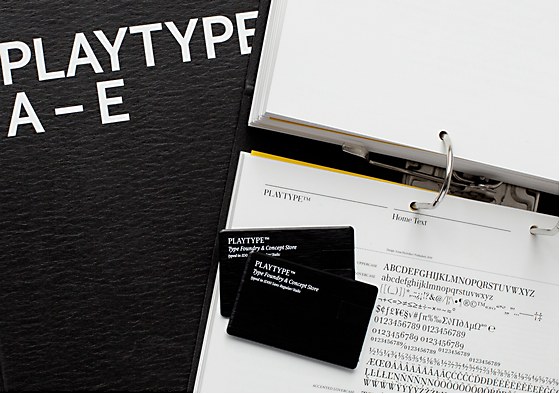 Playtype font packaged in a credit card-like USB, along with its index.

So when Ibfelt spotted a small retail vacancy in Copenhagen right around the corner from the office, on a street where they buy their daily coffee, he knew this was it. The concept: Create an eye-popping, brick-and-mortar shop where customers can walk in off the street and purchase digital fonts (plus a load of other typographic gifts and paraphernalia), all in a space designed with a black-and-white typographic motif. Swoon!

In fact, with a background in fashion design Ibfelt admits, “I’ve always wanted to try out the whole world of producing products and selling stuff in a shop. I’ve been having that vision for many years. And since we’re constantly helping clients grow their own brands, it just felt natural at some point to try it out ourselves...and enter into that battlefield.”

Because it was such a unique concept and would also provide an amazing platform for the designers in the agency to freely experiment and bring their ideas to fruition, everyone—including partners director Mari Randsborg; creative directors Jonas Heskcher and Jens Kajus; and CEO of e-Types Group, Søren Overgaard—was excited about the venture.

There were also a few trepidations. The first, of course, was cost, but Ibfelt adds, “Luckily, the board and my partners thought it was such an interesting, good idea; we all went along and invested a small amount.”

The other issue? Fear. Ibfelt explains, “You know, it’s like when you’re a fashion designer and you have a show on the catwalk—you’re sort of naked. People will see your stuff; they’ll write about it good or bad. We’ve always hidden behind the clients and now we’re out there on our own. We had to make decisions for the look of the store and people will judge us on that. And it was also scary entering that world of producing stuff and not knowing whether people would buy.”

Ultimately, they decided to go for it because, “Sometimes you have to go where it doesn't always make sense in a business context,” Ibfelt confides. “If we should innovate, we should do something that feels right.”

E-Types began the three-month-long process of bringing Playtype, the store, to reality with a huge workshop one evening. They invited the entire 35-member design team to contribute ideas to everything from the interior of the shop, to the products, to the marketing, pr and strategy. Although this was a great way to get everyone committed and involved, they quickly realized it wasn’t the best way of working. Ibfelt explains, “Everybody had brilliant creative ideas and somebody had to decide which creative direction to go. You can’t have all 35 people creating a shop, that’s not possible; that maybe was quite naïve from my side—wanting to have everybody involved in the beginning.”

Thus, they went on to a more practical mode: A smaller group of designers including Ibfelt were responsible for the actual design of the shop and making the products. Their main concern was that the store look like a brand and not like some students at a design school were doing it. If this meant buying an expensive neon sign, or the exact right counters and having them specially made, that’s what they would do. From black-and-white checkered floors, to oversized letter graphics on the wall, to big wooden letter blocks, the entire shop is typographically themed.

For the products, they decided to focus on accessories they wished they had in their own design office such as coffee mugs for their meetings, laptop covers for their computers, and high-quality bags for business trips. In addition, the store boasts an array of typographic posters, notebooks and even wine bottles—all beautifully and boldly designed with letters from the Playtype collection. 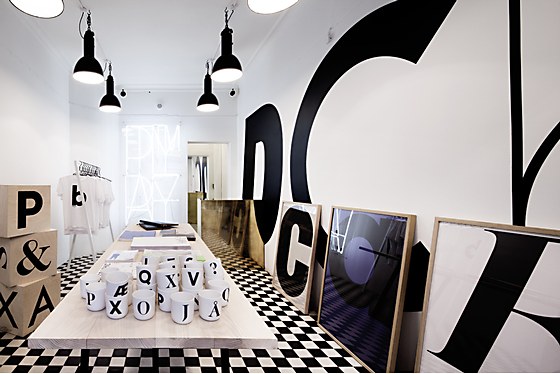 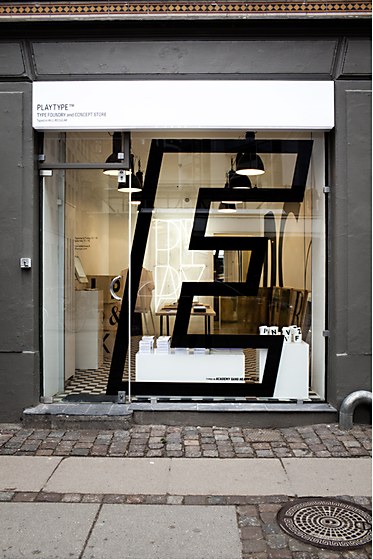 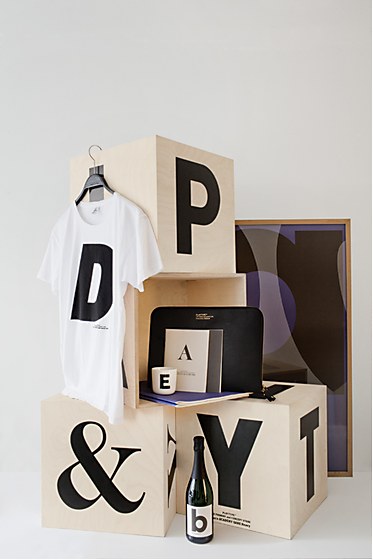 But how to package the actual typefaces in a tangible manner was a whole separate challenge. After much research, they decided to load the digital fonts on USBs that resemble little credit cards to give them an ultra-tactile feel.

On December 1, 2010, Playtype opened its doors. For the first month, everybody in the design agency had a shift behind the counter. Ibfelt adds, “It was funny standing in the shop—we’ve all experienced entering a store and buying a product—and suddenly we’re on the other side, just excited to sell a coffee mug.”

The reaction and support from the design community has been huge. “All the graphic designers just love it. It’s a celebration for the line of work they do,” Ibfelt explains. However, those outside the profession don’t always grasp the concept right away. “You know it is a strange concept,” Ibfelt muses. “But I also think that’s what draws people in. They stop and look, then come inside and ask, ‘What is this?’ And then we tell them all about it.”

Recently, they had a professor from the local university in the shop wanting to buy a typeface. “He knew nothing about typefaces and suddenly there was a typeface shop on street level and he could ask all his questions, which he never had the opportunity to do before. So we’re also educating people about typography, which wasn’t part of the plan—but that’s really exciting.”

One of the most unexpected surprises is that folks have even started buying typefaces as gifts. “It’s really funny!” Ibfelt exclaims. “They stand there for half an hour finding just the right typeface for their boyfriend or girlfriend; it’s a very different present than you would normally buy,” he says with a laugh.

Ibfelt admits starting a retail shop has certainly been a learn-by-doing process for the whole team and a totally different game from running a design consultancy. “We just have to throw ourselves out there, take the beating and make those mistakes. It would have been much easier to just do the Web site. It’s stupid. It’s a stupid idea! It makes no sense at all. It’s just throwing money into the shop, which could have been used for bonuses, advertising or whatever.” Then he adds, “It sure is fun.”

It’s also been a brilliant way for the design agency to position itself on the edge of creative innovation, not to mention garner attention from creatives around the world. They’ve even gained new clients in the process. Ibfelt says, “We bring all our clients and potential clients to the shop and they all love this creative idea. And then they buy a project from us because they see what we're capable of creating.”

Although the shop was originally intended to be open for one year only, there’s a big chance Playtype will extend its stay. And I for one seriously hope the doors remain open for a long time. I mean, where else in the world—other than on Wheel of Fortune—will you ever literally have the chance to say, “I’d like to buy a vowel!” ca 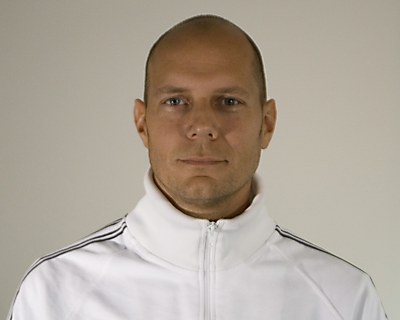 Columns / Insights
Looming, Unfinished Problems
Josh Fehr discusses how design can take technology beyond its original intention, having a life outside of work, and the things he’s managed to store in the back of his brain. 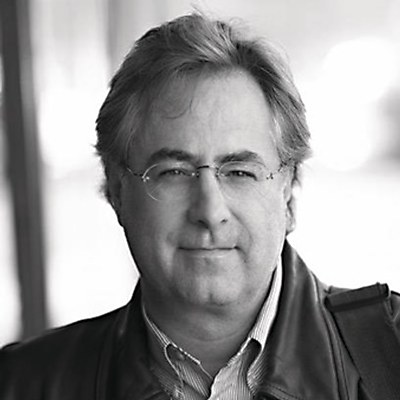