By Lisa L. Cyr
Inside us all there is a story just waiting to be told. It begins at childhood and develops gradually over time. With every encounter, observation and experience, the tale becomes richer with a more expansive intellect from which to draw. In the heart, an amazing adventure lays dormant, waiting for the right time, when all the pieces are in place, for the dream to come to fruition. As a child, illustrator and author James Gurney was enamored by the classic tales of Robert Louis Stevenson and Jules Verne and loved building model ships and flying machines. After high school, he went on to major in archaeology, studying the remains of past civilizations. Mostly self-taught, the artist worked as a freelance illustrator for National Geographic where he spent time on location with archaeologists, paleontologists and other scientists. “At the end of the day, I’d sit around the campfire with these experts and talk about the dream of finding lost worlds,” recalls Gurney. Such encounters inspired the artist to create a series of seven limited-edition prints of brilliantly detailed, fantastical cities. “I wanted to make the impossible look almost inevitable,” he says. “The realistically painted scenes each had something impossible in them, like people riding on dinosaurs or a city right in the middle of a waterfall.” With the assistance of Ian Ballantine, the prints led to a 160-page picture book targeted to adults. Taking two years to realize, Dinotopia: A Land Apart from Time sold in 32 countries worldwide and was published in 18 languages. The success spun three sequel works, each divulging more about this amazing world where dinosaurs work in a symbiotic relationship with humans. 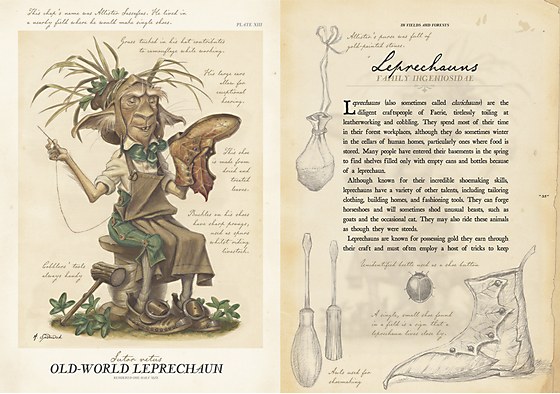 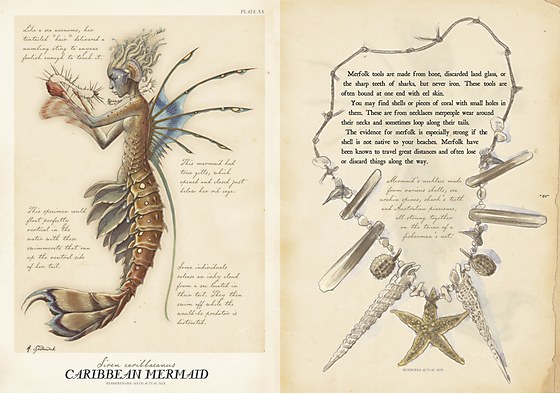 Two illustrations from Authur Spiderwick's Field Guide to the Fantastical World Around You: Old-World Leprechaun and Caribbean Sea-Mai. DiTerlizzi created a highly-detailed book dummy for the 120-page Spiderwick field guide. Constructed in Adobe Photoshop, all design aspects including art, sketches and captions were on individual layers for ease of editing the numerous small texts. This was not only helpful for the US edition, but for the translation of the foreign editions as well.

For author and illustrator Tony DiTerlizzi, a childhood obsession transformed into a series for young readers known as The Spiderwick Chronicles. “I grew up in South Florida and always loved the flora and fauna. Everything is big. There are these giant man-eating flowers and the insects are three to four feet long,” he jokes. “When I was twelve years old, I spent the summer creating this field guide.” Growing up, DiTerlizzi was drawn to other worlds like George Lucas’s Star Wars and Jim Henson’s The Dark Crystal. He was also an active player of Dungeons & Dragons, a fantasy role-playing game that he later illustrated. “Looking back, it was a huge influence, as the games were all about world-building–soup to nuts,” shares DiTerlizzi. “It was a great training ground.” The artist went on to illustrate three books for Simon & Schuster, one of which won a Caldecott honor. “There was a lot of buzz and the publisher was really excited, asking me what my dream project would be,” reflects the artist. “I said that I’d really love to work on the field guide that I’d made as a kid.” The publisher embraced DiTerlizzi’s vision and together with co-writer Holly Black, the collaborative project took flight. Initially conceived as a 500-page book, the project shifted gears. To create a built-in audience, the publisher decided to break up the story, releasing five-chapter books over the course of two years prior to the launch of the lavish field guide. The series was an amazing success, selling in the millions.

The development of an intellectual property that can span across media begins with an engaging story that is compelling enough to captivate an audience on an emotional and intellectual level. To introduce a level of believability to an imagined world, the creator must have a deep understanding of the landscape, architecture, creatures and vehicles, drawing from both research and personal experience. For Dinotopia, Gurney began by creating a detailed map. “I started with an outline of an island, making sure to include mountains, jungles, canyons and coastlines,” he explains. “I also put in names of places that I knew would go beyond the book so that I could revisit them later, giving the readers a feeling that there was more.” To help envision complex scenes, Gurney created maquettes of distinctive locales and characters out of Styrofoam, cardboard and clay, playing with the arrangement and photographing it from different angles and lighting situations. In addition, the artist listened to nature CDs as a way to completely immerse himself into the imagined scenarios. “It’s important to live inside your paintings, throwing yourself into the picture frame,” adds Gurney. To further enhance the ideation of the storyline and fantastic imagery, the artist keeps abreast of new archeological discoveries, consults experts in myriad fields and frequents natural history museums, going behind the scenes to sketch.

For DiTerlizzi, creature development was the biggest challenge, trying to make his creations fresh and exciting to an already visually savvy audience. “I wanted to be able to bring something new to a conversation that has been going on for centuries about what a fairy, goblin or dragon looks like,” he says. “I did a lot of exploration, looking at nature and avoiding the obvious connections.” The artist also sought inspiration from illustrated books that he loved as a kid, including works by Arthur Rackham, John James Audubon and HJ Ford. The Encyclopedia of Fairies by Katharine Briggs also served as a resource. Although world-building incurs intensive planning, there is still much left to the reader’s imagination. “Picture books are one of the most powerful art forms,” Gurney adds. “From picture to picture, there are these gaps in time and it’s up to the reader to conjure what happens in between.”

When a story is successful in the marketplace, it opens the door to other opportunities that would not have existed otherwise, attracting film, TV, game, audio adaptation, collectibles and other merchandise. “The movie business is hungry for ideas and it’s always looking for people with vision,” says Gurney. “Everyone is very aware of all the illustrated books, graphic novels and comic books that are coming out.” DiTerlizzi agrees, “Studio executives have their finger on the pulse of what is going on in publishing. We’ve seen an amazing explosion of studios adapting children’s literature to film.” The first stage of the film or TV adaptation process begins with an option being made by a studio interested in developing a project. If it moves forward, a purchase is made. Projects can also be placed in turnaround. “Dinotopia was originally optioned to Columbia Pictures, which did a lot of initial development. When a new administration took over, it went into turnaround,” shares Gurney. “Hallmark Entertainment later bought the property out of turnaround for a three-part mini-series and a thirteen-episode weekly show for television.” With large complex environments to build and challenging special effects creatures to animate, the ambitious project made groundbreaking strides in cinematography, winning an Emmy. 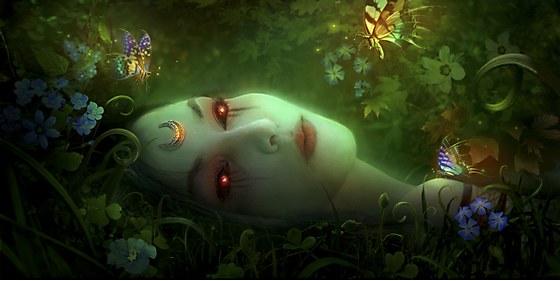 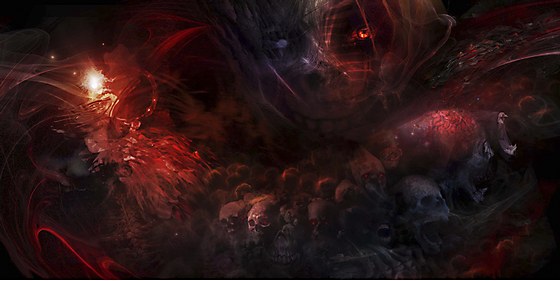 Two pieces created by Philip Straub: (top) Aadyasha, one of the main characters from the Utherworlds intellectual property; (bottom) The Nightmare Realm—The Language of Fear: In Utherworlds, the Nightmare written language is alive and has the ability to take many physical forms. The language was formed by the blood and dark magic of Hellzunas, the dark leader of the Nightmare Realm.

In the case of The Spiderwick Chronicles, the project was a package deal, for which the books, movie, game and audio adaptations were all contracted up front. At the time, Simon & Schuster was under the same parent company as Paramount Pictures and Nickelodeon. This aggressive schedule had the artist working at a breakneck pace, where the development of each adaptation happened concurrently. “As we were finishing the text and art, we would send out files to the studios that were feeding potential screenwriters and directors,” says DiTerlizzi, who served as executive producer on the film. “I was also flying back and forth to meet writers and the director.” Having a property transition into other media does require the creator to give up a certain amount of control in order for the project to grow and expand. “When you're condensing a 500-page story into a 90-page screenplay, edits need to be made,” explains DiTerlizzi. “Our position was to work with the studio to make the changes that would ultimately produce a better film.” Gurney adds, “When bringing a world into other media, you have to let go of it in different amounts. In the end, it’s an amazing process where you have the privilege of working with other creative people who bring to the world something of their own.” Both Dinotopia and The Spiderwick Chroncles continue to be prosperous, multimedia properties. The Search for Wondla (Simon & Schuster) is the recent brainchild of DiTerlizzi who envisions the story to cross media platforms.

When developing adaptations to a property, it’s important to make sure the source material is copyrighted and the name and logotype of the property are trademarked. Having an understanding of your audience, knowledge of the industry you’re pitching and a clear and comprehensive business plan are also key.

“The business plan needs to have a progressive, connective nature, speaking to all the different outlets,” says Philip Straub, art director at Warner Bros. Entertainment and creator of Utherworlds, a multimedia property currently in film development. “The book, film, game, Web site, iPhone application and merchandise need to be interrelated. It’s all about building a premium brand.” Because of the complexities of contractual agreements, it’s also highly recommended that an artist obtain an entertainment attorney to assist in negotiations. “When you go out there, be focused, relentless and believe in yourself,” adds Straub. “Stay true to the core of your story, trusting your gut to make the right decisions.”

Technological innovation has opened up a plethora of new opportunities for illustrators to take a more active, entrepreneurial role as creators of their own intellectual property. Spanning from print to broadcast, film, interactive media and beyond, imaginative, thought-provoking work is finding its way into the culture, leaving an everlasting mark for generations to come. ca

Lisa L. Cyr is an accomplished author and multidisciplinary artist with a content-driven focus. Her books, Innovative Promotions That Work, The Art of Promotion, The Little Book of Big Promotions, Brochure Design That Works and Graphic Design That Works (Rockport Publishers), feature top national and international promotional work with sidebars that go beyond the basics to explore strategic and innovative thinking. A graduate from The Massachusetts College of Art (BFA) and Syracuse University (MA), Cyr’s artistic oeuvre has been exhibited both nationally and internationally in museums, galleries and universities. Her work is also included in the permanent collection of the Museum of American Illustration as well as private collections. She is an artist member of the Society of Illustrators in New York City and works in partnership with her husband Christopher Short, painter and 3-D illustrator. 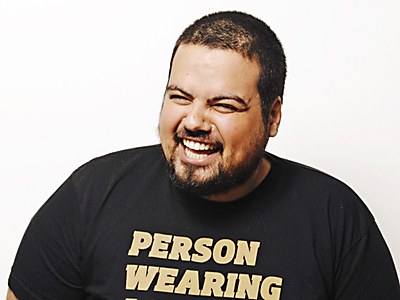 Columns / Insights
Collaboration and A Blank Piece of Paper
Robin Richards comments on making mistakes, the importance of Pilot Hi-Techpoint pens, and why he has a notepad in the shower. 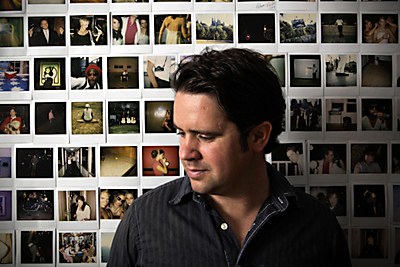 Columns / Insights
Rewarding Journeys Without Distinct Directions
Adam Hester comments on the portraits he'd never retouch, what he would do with a time machine, and why he probably won’t ever again eat lutefisk.