Animation director Tom Brown describes a career path he does not recommend to others.

By Tom Brown
How did you discover you wanted to be in this field? I was sitting alone in my room as a seventeen-year-old, frantically turning through the pages of a university prospectus trying to find something—anything—that would save me from the hard work and toil entailed by my life-long dream of becoming a veterinarian. As I opened the page on a degree in animation, my stomach imploded. Suddenly I realized that people actually made cartoons as a job, and I could learn how to do it.

How did you get your first job? (I do not recommend this.) As an undergraduate, I had a very obnoxious web presence. I said lots of objectionable things which, luckily for me, have mostly been erased from the Internet. I met the English animator Joanna Quinn at a Welsh Animation Group event and she asked how I could be “so obnoxious on the Internet and so charming in real life.” My charm earned me a pint and some work experience at her studio, Beryl Productions International. I stayed for six years.

What has been your favorite client project, and why? Rdio came to Blacklist with a dream project: create a bunch of fifteen-second animations to accompany new music tracks, one every week for a year. Music and animation have such an intense relationship, and being given the opportunity to explore and have fun with it was really inspiring.

What tools do you find indispensable for your work? I bought a Cintiq tablet, and it changed my life. I found the separation between hand and image when using a regular tablet incredibly hard, but as soon as pen hit screen on the Cintiq, liquid gold ran from the nib (at least in my mind). I don’t even know if there are any pencils or pens in my apartment anymore.

What would be your dream animation project? I spend a lot of that time between sleeping and waking inventing Adventure Time episodes.

What personal influences or experiences have had the biggest impact on your style? I go to a lot of animation and film festivals, mostly for the free booze, but there really is no better place to see the vast expanse of styles in animation. In independent work, people explore and create without constraint, and I love that.

What resources do you turn to for inspiration? Inevitably, I am almost always at my computer. I’d like to say that I take full advantage of all the art shows and inspiration that New York City has to offer, but I am normally at my desk, and Tumblr is where it’s at. There are so many people posting so much content online that it’s hard not to be inspired.

What personal/pro-bono creative projects are you working on, if any? [Holbrooks partner] Dan Gray and I have been working on a short film called Root to Tip for a while. It’s obscenely labor-intensive and it’s taking up every scrap of our free time, but we’re pretty excited about getting it out there and into the festival circuit.

How has living and working in New York affected your work? New York has really changed my perspective on everything—work, life, love, humanity. I came here to work, and that’s why most other people come too. I’m inspired by that mentality, and inspired by the raw emotion and hardship of the city, the sadness of the subway, the drunks, the high flyers, the cool kids, men and women openly weeping in the streets. Life in New York is hard, but it’s glorious.

Whose work do you love and look toward for inspiration? I love the work of my peers. I find the work of bigger studios inspirational, but Holbrooks is mostly a two-man band, and seeing the work being produced by similar set-ups is where I feel most jealousy and admiration: Mikey Please, Julia Pott, Rosto, Rubber House. Late Night Work Club’s Ghost Stories was so unbelievably great. And all of my Blacklist brethren; I love them all.

What emerging technologies and innovations will have the biggest impact on how you create in the next few years? Anything that helps translate traditional, analogue techniques into a digital form is useful, but there really is no way to make frame-by-frame animation easier without taking away the magic.

Do you have any advice for people just entering the field? This industry is a world of broken promises. Don’t get too heartbroken. 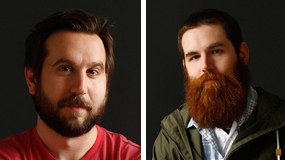 Columns / Insights
Collaboration and Trust
Designers Jason Kernevich and Dustin Summers, aka The Heads of State, spill the secrets of successful partnership.