By Allan Haley
T.J. Tucker has always liked to draw. As a young boy, after football practice and chores, the sixth-generation Texan would draw for hours at a stretch. He also liked to trace the cover illustrations on his grandfather’s magazines: National Geographic, Scientific American, Time—and Texas Monthly.

A couple of decades later, in 2006, that same young boy became the creative director of Texas Monthly. For six years, Tucker produced award-winning design that added to the magazine’s luster. Then in early 2012, Tucker and editor Jake Silverstein decided the time was ripe for a redesign—not a cosmetic makeover, but a top-to-bottom, stem-to-stern reinvention. “Nothing was really broken,” Tucker acknowledges, “but the magazine had drifted from its Texas roots. It was time for a change. Jake and I also wanted to inject more style into the pages. We did ‘rugged, old fashioned Western’ pretty well, but we thought the magazine could be more sophisticated at the same time.”

MOVING FORWARD WHILE LOOKING BACKWARD
Once Tucker and Silverstein got started, they went to town. “We were mindful—and respectful—of the magazine’s DNA,” Tucker says, “but nothing was exempt. We looked at everything, from the logo and typefaces, to the point size of text copy, to article leads—and even the folios.” The changes were made thoughtfully, carefully and in the fullness of time. But they were not timid. They were all encompassing, and they were dramatic.

The magazine’s editorial content also came under scrutiny. The goal was, as Tucker puts it, “to make the magazine more contemporary by making it more debonair—and, at the same time, more Texan.” At the epicenter of this design transformation are Tucker’s choices of typefaces. These faces—and Tucker’s pairings—are bold, striking and, at times, provocative. 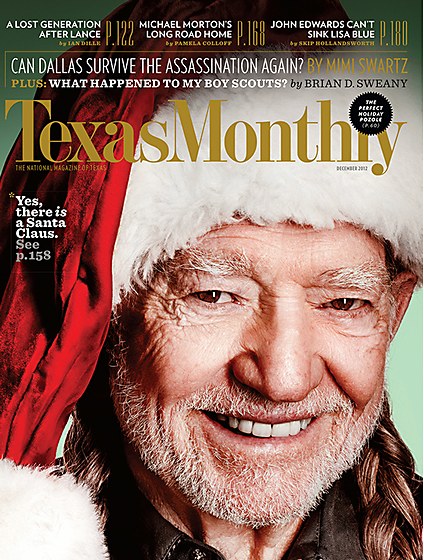 With paid subscriptions at well north of 300,000, Texas Monthly has long been a publication of some prominence. As news cycles have sped up and become fairly unrelenting, the magazine’s journalistic approach is strikingly at odds with sound bites and social media. While some information flies by, sometimes distilled down to 140 characters at a time, eight-thousand-word articles of insightful depth and gravitas keep Texas Monthly on coffee tables and nightstands for extended savoring. The magazine dedicates special issues to topics such as immigration and drought, and hosts numerous editorial discussions on Texas’s most pressing concerns. These weighty pieces coexist gracefully with more lighthearted fare about food, entertainment and lifestyle.

REDESIGN POSSE
Over a period of about a year, Tucker worked closely with his creative team to redesign the magazine. His top hand was associate art director Brian Johnson, of whom Tucker says, “He’s one of the best editorial designers in the country. The redesign would not have been nearly as successful without him.” The design posse was rounded out by deputy art director Andi Beierman, photography editor Leslie Baldwin and art assistant Nicki Longoria.

THE LOGO
The new Texas Monthly logo is the third in the magazine’s nearly 40-year history. The first, at the magazine’s inception in 1973, was a simple wordmark set in the Pistilli Roman typeface. In 1990, DJ Stout, then art director at Texas Monthly, asked Dennis Ortiz Lopez to draw a new logo based on the original. Changes were subtle—the most obvious being that Lopez condensed the letterforms and dramatically reduced the size of the ball terminals. The second logo, updated slightly in 2003, remained in use for 22 years. 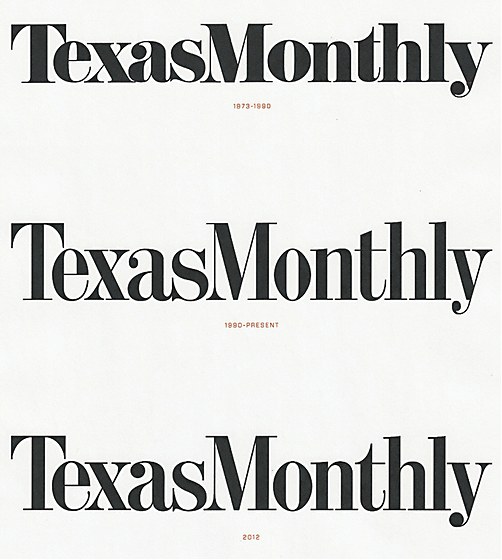 The beginning of work on the new logo considerably predates the magazine redesign. “It was one of the longest gestation periods I can recall,” says Jim Parkinson, who drew the new logo. “I think we worked on the ball terminal of the lowercase y for over a month,” he continues. “T.J. was very particular about what he wanted. Ultimately, we were both pleased.”

“It took longer than I thought,” admits Tucker. “But it was important to get the logo absolutely right.” The final design is a stronger, bolder logo than its predecessor, with obvious roots in the original. “We wanted to give the new logo more character,” says Tucker. “I also wanted to bring back the ball terminals of the original. Around here, we like to say we gave Texas Monthly its balls back.”

THE TYPE
Texas Monthly is read by a large and diverse audience so Tucker stayed with Sentinel, its trademark typeface for body copy—a type–face originally commissioned by Tucker from Hoefler & Frere-Jones. The sturdy slab serif face was designed to be highly legible within a wide range of sizes, and suitable for readers of all ages. Tucker did decide to increase text set in Sentinel to 9.25 point.

The more obvious change in the body copy is the way type is handled. Tucker kept the three-column grid, but reduced the column width and added more space between lines of copy. The resulting text blocks are not jarringly different from previous issues, but are much easier to read.

Tucker also kept the affable Verlag (another Hoefler & Frere-Jones design) as the main typeface for display copy, but added to the mix faces like Maelstrom, Empire, Tungsten and Saracen. “Early in its history, Texas Monthly used all sorts of typefaces. It was really lively, and struck me as one of the signatures of the first issues,” says Tucker. “Over the last several years, however, we kept cutting back on the faces we used. Truth be told, I liked the typographic vitality of the old issues, and felt we weren’t conveying all the tones the magazine projects.” Tucker quips, “We even use Giddyup. It started out as a joke. Who better than Texas Monthly to use the typeface?” The face is, however, corralled in just one place in the magazine.

Light, medium, bold and black weights of Verlag, in addition to several condensed designs in an array of sizes, are put to work throughout the magazine. The typeface is used for heads, decks, pull quotes, captions and sidebars. Though many flavors of Verlag are used, the basic design provides a strong visual base note for the magazine. In a world of industrial strength sans serifs with overachieving X-heights, Verlag’s Art Deco overtones and diminutive lowercase set the quiet typographic foundation for the sophistication Tucker has instilled into the magazine. 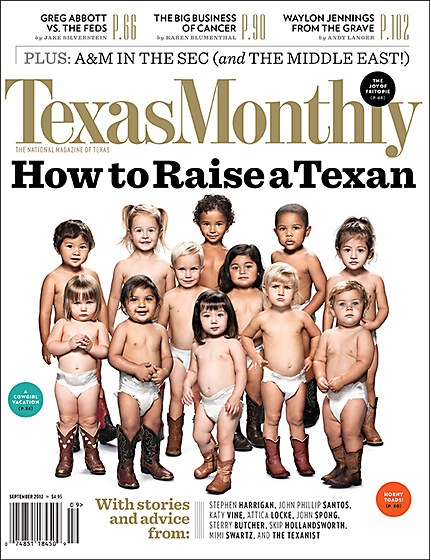 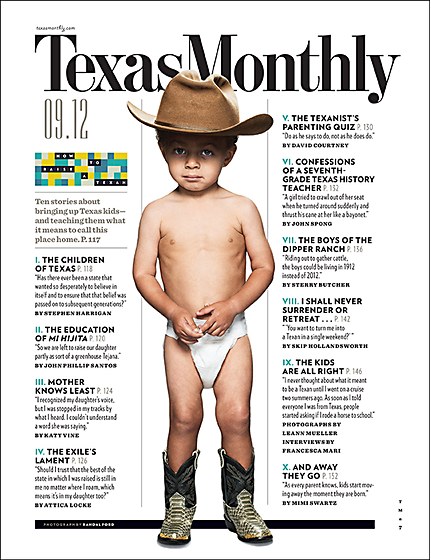 First cover (top) taking advantage of the redesign; and perfect melding of type and image (bottom).

Bigger than life, and more than a little distinctive, the Maelstrom typeface, from the Klim Type Foundry, is used in sumo wrestler sizes as initial-cap identifiers for the Dining Guide and Reporter sections. Much smaller—but still commanding—sizes of Maelstrom show up in the Touts (lifestyle) sections. “Maelstrom has a modern yet Western feel to it that suits us,” says Tucker. “Yeah, it stands out, but it will wear well.”

A digital rendition of American Type Founders’ 1937 design Empire is probably the most important new addition to the suite of typefaces used in the magazine. It is an elegant stressed sans with just a hint of Art Deco nuance. This is the design that confirms the magazine’s typographic sophistication, the tulip of Dom Pérignon that stands stylishly amid Texas Monthly’s more quotidian typographic pairings. Empire is used as large as 120 point for headlines and as small as 24 point for section identifiers—and it is always set letterspaced. “It’s used sparingly, it’s most prominent in the page numbers in the signature rebranding of the cover,” says Tucker. “It’s definitely the typeface that brands the look of the publication.”

When asked about his criteria for pairing typefaces, Tucker responds, “We went through a period where the magazine had a narrow range of tones. With the redesign we wanted to make it more stylish—but also to keep it strong-featured and Western. Contrast in design and typographic color has helped us do that.”

TESTING & TWEAKING
Every design change was tested, scrutinized, discussed—and usually modified several times before Tucker and his team were satisfied. “One of the things I learned,” says Tucker, “is something Brian Johnson often tells me: ‘You always have to be prepared to kill your darlings.’

“Nothing was sacred in the redesign process,” he confirms. The folios are an excellent example of Tucker’s painstaking attention to detail. “We did a lot of exploration into folio design. For the page numbers, we tried: centered versus margin aligned, large type versus small type, Roman versus italic, horizontal versus vertical alignment. We had long discussions about each idea,” Tucker remembers. “We wanted to do something really different and in the process learned never to underestimate how much of a pain in the ass a seemingly simple notion can become.” In the end, Tucker and his team went with vertically aligned folios at the outside margins of the page. To give the typography a little more substance, a T, an M and a star were added above the numbers. 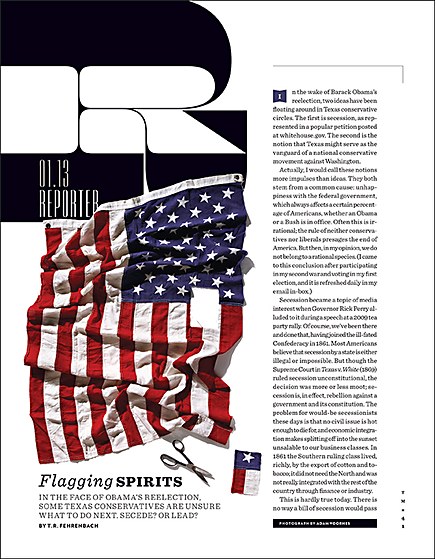 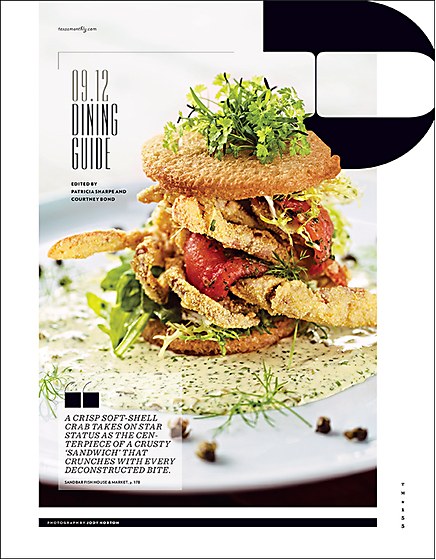 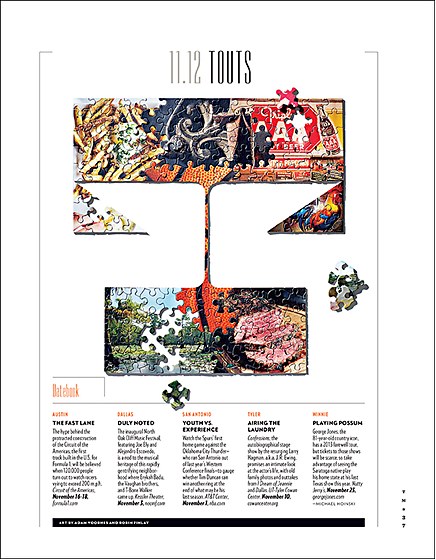 Tucker and his team also introduced something they call “roof bars.” These are hairline boxed-in snippets of information that provide a side note to the stories they accompany. The roof bars, in conjunction with the initial “buckles” that lead off stories, the pilcrows often used to break paragraphs, the hulking Maelstrom quote marks that signal the beginning of pull quotes, and an assortment of stars, arrows and pointers that populate pages, give the magazine a rich typographic texture. This abundance of typographic miscellanea could lead to pages that are cluttered and difficult to decipher—not in Texas Monthly. The Willie Nelson spread, designed by Johnson, in the December issue is an exquisite example of blending images, type and typographic ornamentation to create a spread that is greater than the sum of its parts. Tucker and Johnson are skillful masters when it comes to herding a mélange of graphic diversities into a banquet of elegant typographic communication. Their confident and playful typography shines throughout the magazine. Illustration, photography and type meld perfectly on the page; they are never handled as separate aspects. Every page, every spread in Texas Monthly is delightfully cohesive.

“Almost everything in the redesign was inspired by something in Texas Monthly’s rich creative past. We ultimately tried to revive and tap into that spirit, that past ‘frontier mentality’ as it’s been called around the office. All of that went into the creative calculus,” says Tucker. “A comparison of the magazine today against the magazine in the 1970s might be interesting, although I doubt most readers would discern massive changes.”

Texas Monthly’s redesign was an unusually long process. Tucker, a fearless tweaker and re-tweaker, did nothing by half measures. Complete satisfaction was always the ultimate criterion. The team’s trials and tribulations never showed, and the result of the Texas Monthly redesign is true design magic. ca 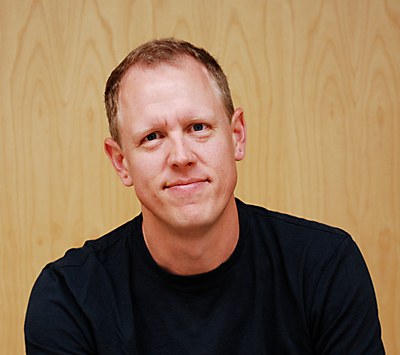 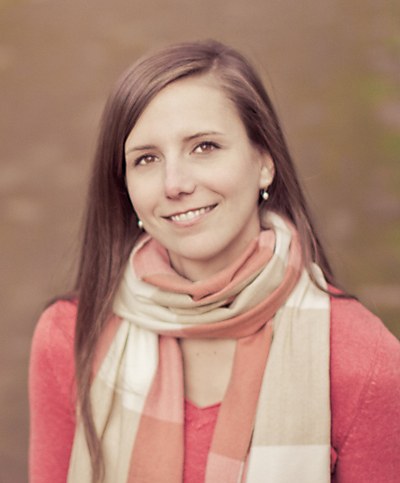 Columns / Insights
Learning on the Curve
Agency creative lead Jennifer Kesler explores the magical universe of a designer's brain—expanding with creativity into all she does and, occasionally, igniting the Big Bang. 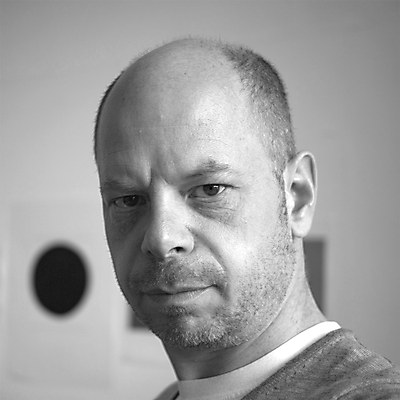