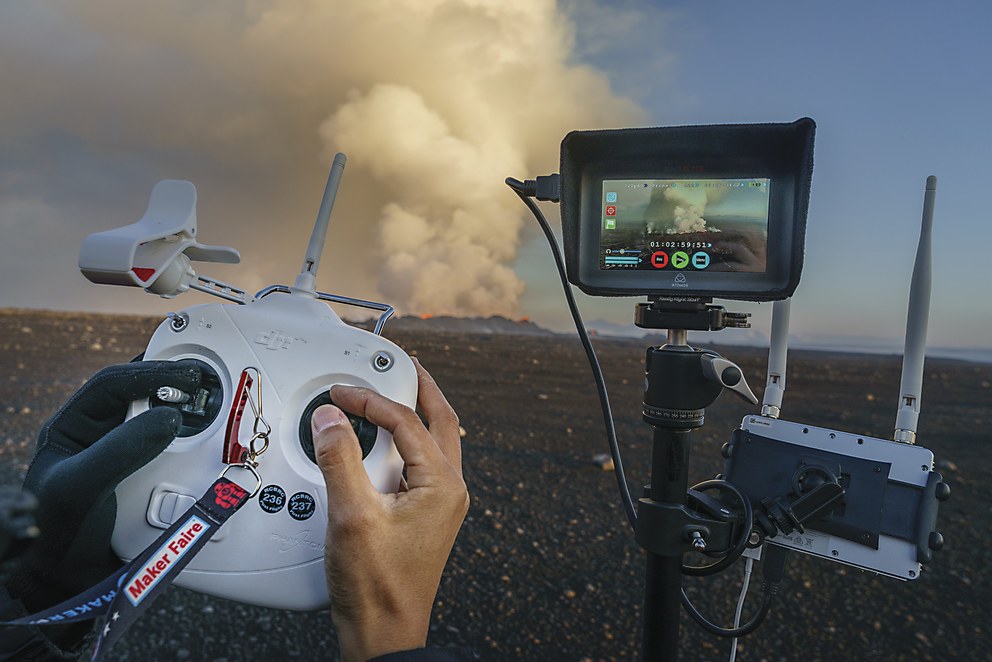 By Dzana Tsomondo
For professional aerial photographers, 2015 is looking like the Year of the Drone. While the industry is holding its collective breath in anticipation of new Federal Aviation Administration (FAA) regulations on the commercial use of drones, the technology itself is moving forward very quickly. This spring saw Wyoming-based production company Brain Farm unveil a souped-up drone outfitted with a $110,000 camera system, capable of providing images at a resolution and speed heretofore unseen in unmanned aerial systems (UAS). At the other end of the spectrum, on March 8, the Chinese company Da-Jiang Innovations (DJI) introduced the newest model of its most popular drone, the Phantom. Lightweight, inexpensive and now sporting the most advanced camera system of any consumer drone, the Phantom 3 is a game-changer in its own right.

In 2014, Icelandic landscape photographer Ragnar Sigurdsson collaborated with DJI’s head of aerial imaging, photographer Eric Cheng, on a project shooting from directly above a volcanic eruption in Iceland. Broadcast on ABC’s Good Morning America, the breathtaking footage was a particularly effective way to demonstrate the ability of UAS to provide new perspectives on our world. 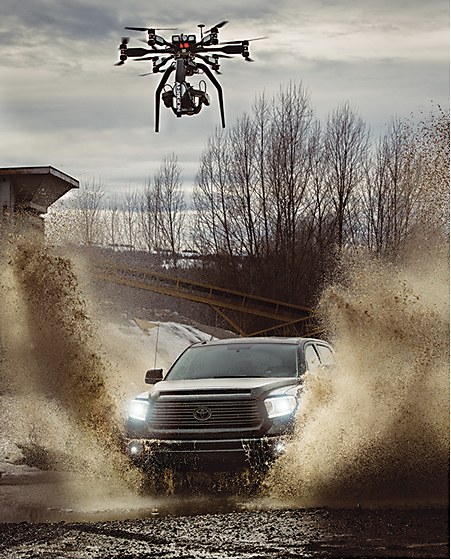 Emmy Award–winning production company Brain Farm gave wings to its prized Phantom Flex4K HD slow-motion camera in a Wyoming-style test flight with some heavy machinery and a whole bunch of mud. Swedish manu­facturer Intuitive Aerial partnered with Brain Farm to build the first drone able to carry the heavy weight of the high-quality camera.
Cheng, who is known for boundary-pushing endeavors, was intrigued by the challenge of the natural environment and encouraged by Iceland’s laissez-faire regulations regarding UAS. His first trip to the volcano was a guerrilla affair, armed with little more than his wits and some DJI equipment. When he saw the results, he knew he had to go back and do it again, on a bigger scale. Already a successful underwater photo­grapher, Cheng was drawn to drones by the possibility of replicating on land the complete freedom of movement available in the water. In 2006, however, the technology was still very much a work in progress. “It had just become possible, if you were able to find parts and willing to go through the pain of following a German wiki, to build one,” Cheng says with a laugh, “and at that time I wasn’t. So I was waiting for that moment right before [drones] were going to become mainstream, and that moment was about three years ago.”

New Zealand–based travel photographer Amos Chapple also saw the writing on the wall and took advantage of what may later be thought of as a “golden age” of drone photography before flight restrictions were put in place. Over the course of two years, he shot aerials around the world with a DJI Phantom, capturing awesome images of famous landmarks from heretofore unseen vantage points.
Maryland-based aerial photography project Elevated Element is the brainchild of husband and wife team Terry and Belinda Kirby. Together they design and build drones, and they published a book on drone photography in 2013. “The development of new technology is what we really see driving the industry,” Terry says. “I can recall a time when the vast majority of civilian [UAS] didn’t even have GPS. Today, that is a standard that many other features hang off of and allows for advanced function­ality, such as autonomous flight.” The Kirbys handle increasingly diverse requests for everything from “cinema-quality video to 3-D scanning and infrastructure inspec­tion,” Terry says. He recently provided 3-D captures of archaeological dig sites.

Established aerial photographers are also embracing the brave new world of UAS—not to replace helicopters, but to expand the possibilities available to them on any given project. British travel photographer Peter Adams has almost 30 years of professional experience, and he cut his teeth working for clients like National Geographic and Canon. When reached, Adams was on assignment in southern Africa, preparing to shoot aerials over the sprawling Okavango Delta in Botswana. To his mind, embracing new technology is just part of the job. 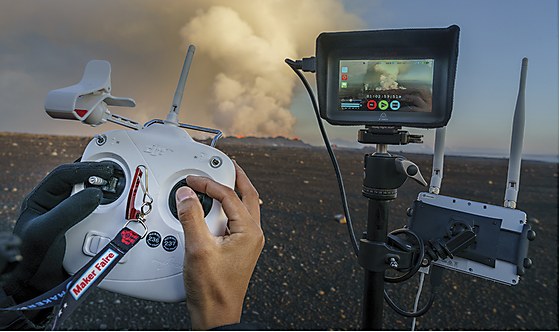 “At the end of May, I’m doing some aerial shots and footage of the white horses of [France’s] Camargue... we’re most likely to attempt this with a drone,” he says, because it “offers a great deal of flexibility and cost savings, particularly as I haven’t yet found a [helicopter] nearby our shoot location.” He says the team will likely hire a professional drone operator, as he hasn’t had time to practice with one yet.

For commercial photographers who want to shoot in the United States, however, the regulatory climate remains an obstacle, and many are taking a wait-and-see approach. The FAA currently authorizes drones for commercial and business purposes strictly on a case-by-case basis. The regulatory web only gets stickier at the local level, with many city and state legislatures passing bills limiting the use of drones. “I have been using [drones] for about a year, but I haven’t shot commercial jobs with them because of the current FAA regulations,” says Cameron Davidson, a veteran aerial photographer whose work has appeared in magazines such as Wired and Vanity Fair and on a commemorative USPS stamp.

Early reports on the upcoming FAA regulations suggest that drone operators may be subject to the kind of muscular licensing require­ments that traditional aviators have to deal with. Creatives in the industry worry that a regulatory overreaction could leave the United States permanently playing catch-up on an important emerging industry. Davidson also has a pilot’s license, which gives him valuable perspective on the issues surrounding drones, as does living in the Washington, D.C., area, with its abundant airspace restrictions. He acknowledges that he has seen his share of irresponsible operators doing stupid things, but he also recognizes the enormous potential UAS have. “They inhabit that sweet spot between 100 and 400 feet that you could reach in a helicopter,” he explains. “But this does it more easily and safely.”

It’s clear that we are just beginning to look at UAS applications. Terry Kirby predicts that “sense and avoid” technology will be the next big leap, enabling UAS to identify and maneuver around obstacles autonomously. And with companies finding ways to marry sophis­ticated cameras and drones, it’s only a matter of time before lightweight cameras are being made explicitly for that purpose. ca 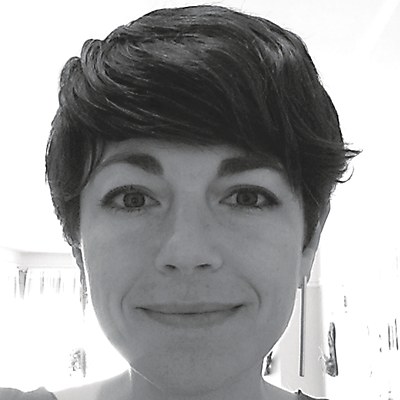 Columns / Design Details
The Big Picture
Sara Breselor shows how strategic design thinkers use illustration to get everyone on the same page.