As creative director of the Sundance Institute, Luis Farfán hopes to use design to support underrepresented voices.

How did touring in a band prepare you for the world of design? Most of my touring days were spent in a van with my two bandmates crisscrossing the United States and Canada, playing in punk venues in places like Denton, Texas, and Cincinnati, Ohio, and driving for hours to get to an unknown destination to perform for less than 30 minutes. The camaraderie built with your bandmates, and the connection we had with the kids who would come support us, instilled core values that I found useful for working in design—mainly a good work ethic, team building, humility and respect.

How has working at ad agencies influenced your understanding of branding or design? Before I was an ad guy, I was a music guy. And before that, I was making collages for fun. I didn’t go to ad school, so for me, working in ad agencies gave me the background to look at art as a functional commodity, which may sound horrible, but it’s not. It allowed me to look at artful applications of a design exercise or creative idea. Creatives and designers in an ad agency are the same as in any other industry or practice. They are tasked with solving a brand’s issue through smart, clear and thoughtful communication tactics, whether that’s a logo, a design system or an entire campaign. It also showed me how artists borrow from advertising and vice versa. All of my ad work has a subtle—or not so subtle—reference to an artist or art movement that I find inspirational.

Why did you decide to take up the role of creative director at the Sundance Institute? To be completely honest, I was surprised that I was hired as the Sundance Institute’s first-ever creative director because most of my professional experience has been in advertising and media. I never thought a nonprofit like Sundance would want someone like me in its halls. When the role was offered to me, I humbly accepted it; the primary reason being that I’m able to put my skills and strengths toward helping a mission and values-driven organization increase its outreach. Being part of an organization whose values perfectly ladder up to yours is a gift.

How do you use the Sundance Film Festival’s history and values to design an identity for the event? The history of the festival is intrinsically tied to the history of the institute. One of those core values is inclusion and supporting underrepresented voices by championing those visions and creating a safe place for the exchange of philosophies and ideas. Those values have to be communicated through the design language and visual identity of the festival, which goes well beyond simply creating a logo. For the 2020 edition of the festival, we partnered with a small design studio in London and hired a team of twelve designers from various backgrounds to design and execute the identity of the festival.

What is it like to attend the Sundance Film Festival, and how does it help you as a designer? The festival is really fun, but it’s a bit of sensory overload for people. The films are the main showpiece, of course, but the panels, activations and events that happen throughout the festival are inspiring and thought provoking.

Even though my function at Sundance is different from the other folks attending, as with all of my work, I place myself as a consumer of the project I am a part of. When I was playing music and making records, I made the record that I would want to listen to. That through line carries itself to the present, and I ask myself: As a festivalgoer, does the festival look and feel amazing? Does it inspire me? Do I like it? Putting yourself in that context helps you whenever you are part of creating anything, especially if it’s an ecosystem such as a festival.

What is the connection between film and design, and why is it important to you? Film is design. How a director shoots, the composition of a frame, the narrative arcs, sound and editing—everything is design. Design is important because it’s all around us—the cities we live in, the cars we drive, the planes we fly in, our homes and where we work. Everything is connected, and, at the core, was a design project that someone or some team had to solve. It also says a lot about us; our decisions are a design process that we go through—how we structure our lives—and that is also design.

How does music influence your creative process? I like simplicity, and I’m a minimalist—punk showed me the way. Strip everything to its core, get to the basic operating mechanism, and you’ll find the answer. Kill the guitar solos and sound effects; give me the raw power of a four on the floor drum beat, the unfiltered tension of a guitar amp that’s about to blow. It’s a process of elimination: get rid of the static and arrive at the core of things—get primal with it, whatever it happens to be.

Who do you most admire? I’m most influenced by people like Josef Albers, Tauba Auerbach, Corita Kent, El Lissitzky, Paul Rand and Sophie Taeuber-Arp. Every one of those folks has passed except for Tauba Auerbach, and she’s amazing. They all share this gorgeous way of simplifying complex ideas into beautiful compositions. I’ll steal Paul’s words: “Simplicity is not the goal. It is the by-product of a good idea and modest expectations.”

What is the design scene like in Los Angeles? How does it inspire you? Los Angeles has been in an upswing creatively for about ten years. The entire creative community—sculptors, photographers, designers, filmmakers, musicians—all work off each other and feed one another, and it’s great! I am, of course, too young to have experienced the creative heights of Berlin during Bauhaus, or Moscow during constructivism, but LA has the feeling of importance and of something special happening. In 50 years, we’ll look back at the early part of the twenty-first century and define LA’s artistic renaissance as an important era in the arts. We’re too close to it to define it, but for now, it’s great to see so much good work coming out of one place.

What do you hope to accomplish through your work with AIGA Los Angeles? The objective at AIGA Los Angeles is the same as one of my objectives at Sundance—to open up the creative disciplines to people without access. As a young Hispanic kid going to a public high school in LA, things like “graphic design” and “creative writing” were not familiar to me because there wasn’t a curriculum that supported those subjects. Access and knowledge are incredibly important, and it’s scarce at the moment, especially to people in socioeconomic tiers below the middle class. I was lucky enough to have a math teacher give me a book on graphic design—after failing his class—and encourage me to look into that as a path. If I didn’t have him, I probably would have forged a career in a creative discipline way later in life—and maybe it would have been too late to do anything about it. I want to pay that favor forward as many times and as much as possible.

What’s one thing you wish you knew when you started your career? The career path of any creative can be a rough one. It’s demanding, competitive and full of amazingly ambitious people. I’ve seen the stress and weight on young creatives, the same way that it was for me. I would tell the younger version of myself to not worry about things so much and instead focus on experimenting with things, and to not be afraid to fail or sound ridiculous with an idea. Not every idea you have is award winning, and not every idea you have is total trash; reality hides somewhere between the two.

Luis Felipe Farfán is a creative director based in Los Angeles. Born and raised in Aguascalientes, México, he has more than a decade of experience working in the media, advertising and arts industries. Farfán is also a published art photographer and writer with a handful of art books and zines under his belt. In addition, he hosts a biweekly talk show on the radio station NTS. Farfán currently heads the creative for the Sundance Institute and is on the board of directors at AIGA Los Angeles. 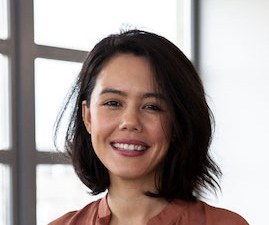