Andy Gent muses on the craft of making puppets come to life in stop-motion films.

How did you discover your passion for puppet fabrication? My father was a cabinetmaker, and growing up, I made little mechanical creatures from scraps of wood and cloth. By the time I got to Kingston University in Kingston upon Thames, United Kingdom, where I studied graphics and illustration, I was making and posing things to be photographed in little dioramas and 3-D picture books. One of my lecturers said, “Have you thought about doing stop-motion animation?” I looked into it, and that was the eureka moment. I thought it was amazing that you got to build characters however you wanted to and bring them to life in such a short period of time.

How do you get started in stop-motion? There was an amazing UK documentary series on Channel 4 called Formation, which showed animated short films. If they liked your film, they sponsored you to make it at the Museum of the Moving Image in London, where visitors could watch you fabricating and shooting part of your short film.

I had come back from university and saw that Formation was on, and the film they showed was called The Sandman, a super pivotal stop-motion by Paul Berry. He and the other creatives were describing why they wanted to make The Sandman and how they did it. I started to jigsaw together that there was an industry for this, as stop-motion was a secretive world that few people were aware of at the time. Shortly afterwards, the Wallace and Gromit films exploded on the screen, and then we had The Nightmare Before Christmas. After that, the secret was out of the hat: You could do stop-motion and it wasn’t just for black-and-white, old-fashioned films. It was a living and breathing form of filmmaking.

How has technology changed since you started? It’s more readily available; it’s easy to practice and has better quality. Nowadays, you can shoot stop-motion films on your mobile phone. There’s stop-motion software for you to edit and put together without even having to get a camera. And with today’s smaller cameras, you can use smaller sets and set it quickly in your living room or wherever you want to shoot. There’s none of the baggage of film. As much as film is a lovely discipline, I have to admit I’m excited, because back then, you’d have to start early and then wait to see what you had shot. Digital’s made it so much easier.

Don’t try to overmake anything. What is important is to tell an amazing story, even if it’s just 30 seconds.”

What are some of the trickiest materials you’ve worked with in stop-motion? Anything organic that can wilt underneath the lenses, like the fur on Isle of Dogs and Fantastic Mr. Fox, which was incredibly delicate and wanted to do whatever it wanted to do. Water is also not stop-motion friendly. We try to find a substitute for water by using gels, saran wrap and glass. While each of these materials creates different looks, water is still tricky to re-create. Fine cloth is also difficult. A costume made with fine cloth is like another puppet. It has to bend in the wind but still be self-supporting and hold still.

For example, many years ago, I did the film Corpse Bride, and I had to make the bride’s veil float in the sky. We supported the cloth using mechanical wires so it would be controlled and stand perfectly still. We even shot the veil in a tank of water with a small turbine so it would float.

For Coraline, director Henry Selick wanted to make mists and fields for the “Other World” in the film. In the scene when the character Wybie comes crashing over on his bike, we had every blade of grass on the hillside move. They were all animated on giant sheets of perforated steel underneath the set; we had the blades of grass stick to each one of the bent little wires.

What are the opportunities and demands of working on a feature film? I can’t begin to tell you how cool and fun it is. You read a script and imagine what the characters might be like. Sometimes you draw them, and sometimes a character designer draws them. Then, after seeing the designs in 3-D, you say, “I can imagine it moving this way, imagine it talking like that. I can imagine seeing it move its head or arms. I can imagine its clothes.” Then you go through the long process of building it and giving it every opportunity to move. Then you see this thing that you read about on the first day actually talking and walking in a convincing manner. The little puppet will be in front of you. It’s not hidden behind a computer screen. There’s something very magical about that. That said, we do work quite hard to get these films done. I worked on Isle of Dogs for three years in charge of the puppet department. You’ve got to be patient and you’ve also got to be impatient because we’re trying not to waste time and to make things as smartly as we can.

What excites you about stop-motion now? Seeing where it goes. We’ve got new directors moving in. We’ve got directors who’ve already done amazing films freeing themselves to do wilder and wilder work. Tim Burton reinvented stop-motion by doing freer, more textural things. And Henry Selick, who directed Coraline and The Nightmare Before Christmas, has a new film coming out. To my knowledge, there are about eight big films getting through their first stages. Guillermo del Toro’s Pinocchio is being put together, and that’s an exciting-sounding project. So it’s the excitement of seeing a lot of things coming together. There’ll be lots of new textures, new looks, new characters, new backgrounds and new stories. It’s going to be a great couple of years ahead.

What advice would you give someone who’s interested in trying her hand at stop-motion? Get your phone or a little camera, get a very simple stop-motion app or install software on your laptop, and start animating. Don’t try to overmake anything. What is important is to tell an amazing story, even if it’s just 30 seconds. Give it good structure and tell that story really well. You just need to do as much of that as you can. Draw a lot, look at things, observe movement and create little stories. As you get better and better, you’ll come into the same paths with other people. Somebody might be a really good puppetmaker. Somebody might be a really good animator. Somebody might be a very good director. Until you start, you won’t know what your particular super skill is.

Originally from Derbyshire, United Kingdom, Andy Gent moved to London in 1991 to train as an illustrator at Kingston University. It was here that he first discovered animation. After leaving university and freelancing in all areas of stop-motion fabrication, he found his passion in puppet design and construction. His most recent collaborations include Wes Anderson’s Isle of Dogs (2018), Tim Burton’s Miss Peregrine’s Home for Peculiar Children (2016) and Coraline (2009). Gent runs his own puppet-, character- and set-making studio, called Arch Model Studio Ltd, in the heart of the east end of London, where he is watched over by his chocolate Labrador, Charlie.

Columns / Advertising
Have You Ever Run The Creative Gauntlet?
Ernie Schenck musters creatives to endure the scrutiny of their peers. 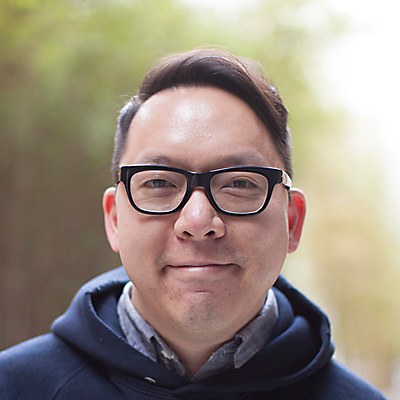