How to Explain Why Typography Matters

Thomas Phinney on how to explain why typography matters.

By Thomas Phinney
"What do you do?"

"Oh, you’re a topographer. So does that mean you have a geology background, or you mostly work with maps?"

"Erm, not exactly. I’m a typographer, I work with fonts."

If you are a designer who cares about typography, odds are that you regularly try to explain to somebody–whether a client or someone at a party–why anybody should care about typography. Web designers are beginning to face these same questions that have long plagued graphic designers, thanks to new Web technologies such as @font-face and CSS3 typography features.

In the past decade, awareness of fonts and typography has become a bigger part of mainstream culture than it once was, thanks to such things as Gary Hustwit’s documentary film Helvetica, frequent news coverage of people who hate Comic Sans and type designer Matthew Carter winning a MacArthur “genius” grant. But all too often one is met with a blank look and/or confusion as to why anyone would bother about such things. Having encountered this regularly in my professional career as a typographer, I thought I’d share some of the ideas, arguments and information I’ve marshaled over the years: explaining branding, analogies about film, fashion and furniture, and summarizing recent research. 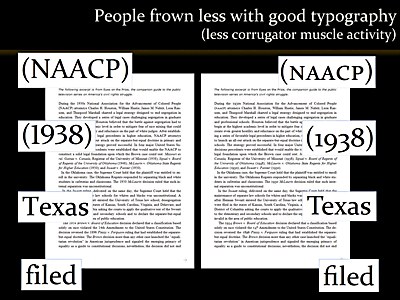 Even subtle differences in typography, such as appropriate small caps, old style figures, kerning and ligatures can measurably affect how people react to a document, as shown in this experiment by Larson et al.

Why care about typography and fonts at all? The branding argument is an easy one to make. The brand is the unique personality that identifies a product, service, person or place. Design gives us the visual instantiation of a brand. The selection of typefaces and the arrangement of them can be as important as the use of color, images or abstract graphics in creating a brand, and this is usually easy to explain.

But wait, your client says, “I already have a logo. Why worry about fonts and typography everywhere else?”

New York-based designer James Puckett had a great explanation when we discussed the issue on Typophile.com: “I always tell people that the difference between good typography and [bad typography] is the difference between work that looks professional and work that looks like someone threw it together in MS Word. One reason Apple’s stores look so good is the careful and consistent application of [the typeface] Myriad. But Kmart’s careless mashup of Helvetica, Gill Sans, News Gothic and Gotham looks like, well, Kmart.”

OK, so being consistent is good, but why not just be consistent with Times or Courier? Why do people keep designing new fonts anyway, don’t we have enough already? Hasn’t everything already been invented by now?

The kinds of clothing designs we see on Paris runways are usually the fashion equivalent of display typography—usable only in narrow situations, creating a memorable style that communicates quite strongly. Everyday clothing styles are a different matter, communicating more subtly, like body text choices in typography.

I like to use fashion and furniture analogies for another reason: Typefaces, too, are artifacts that can be aesthetically pleasing and functional at the same time. A great chair is not only visually attractive, but comfortable to sit in; a great typeface can be pleasing to the eye, and perform other functions as well, such as being legible for printing a newspaper, or on screen at body text sizes. Like furniture and clothing design, type design is a craft, blending art and science.

“Sure, that’s all very well, but I hardly notice the difference between this Aerial and Gill Sans, and I’m sure my customers won’t either. Same with all these fancy features you talk about, like ligatures and old-fashioned numbers.”

It would be great to answer this objection by quoting differences in reading speed and comprehension from good typography. But it turns out that even aesthetically unappealing choices rarely make a difference in those kinds of objective measures. One has to go to serious extremes to have a major impact on such variables.

Even so, as psychiatrist/philosopher Paul Watzlawick said (oft-quoted by Erik Spiekermann and others), “One cannot not communicate.” Applied to typography, this suggests that even using system fonts and default settings in Microsoft Word is a choice that has an effect. Viewers don’t have to be consciously aware of the details to experience the collective impact of typography. Even if the effective communication of the typography is “this is a typical office document.” That is a statement in itself, and one that can matter—particularly if the desired communication is “this is a menu from a fun restaurant.”

Once clients or acquaintances are convinced that typography matters, often they want to do things that we might consider, well, cheesy. Or at least excessive. In an online discussion, Italian designer Andrea de Franco observed, “There’s a general urge for something that shouts the communication as loud as possible, confusing accessibility and clarity with mere visual pollution.” Of course, there is a place for evocative typography, but unless one is being deliberately campy, there are limits.

So how does typography communicate without people noticing typography? It’s like watching a film: The average movie-goer knows little or nothing about camera movement and film editing, and rarely consciously notices these things, yet directors can still affect viewers by using these techniques. Similarly, people can be affected by good typography without being actively aware of it.

Yet if good typography doesn’t affect reading speed or comprehension, what difference does it make, and how do we know?

More sophisticated research techniques are beginning to show how good typography affects a reader’s mood and even performance on other tasks. Microsoft may not have a great rep with creative professionals, but they deserve props for having Kevin Larson, a cognitive psychologist on staff who focuses solely on reading, fonts and typography. Microsoft sponsors all sorts of research in this area by Larson and others, notably the set of studies by Larson, Hazlett, Chaparro and Picard published as “Measuring the Aesthetics of Reading,” results of which were first presented at the ATypI conference in Helsinki in 2005, and later published in 2006.

In short, they found two ways to measure the impact of good versus bad typography. One was “reduced activation in the corrugator muscle” (people frowned less), and the other was “improved performance on creative cognitive tasks” tackled after reading. Again, this was with documents that did not produce differences in reading speed or comprehension.

Until not long ago, most research on typography, and especially research on legibility in type design, was lacking. Luckily, there is a whole new wave of psychologists and typographers doing serious experimental research on the effects of good typography, and even what constitutes good typography or legible typeface design, and doing it in ways that are not leading to ridicule from typographers and type designers. Sofie Beier, for her PhD at the Royal College of Art in London, has done some fabulous research (published as a paper with Larson in Information Design Journal, 2010) on designing letterforms for legibility. Cognitive psychologist Dawn Shaikh, who has an extensive background in typography and legibility research, is now a user experience researcher at Google.

Other recent Micosoft-sponsored research looks at new ways of measuring eye fatigue during reading, which also seems likely to show dividends from good typography. The orbicularis oculi is the big muscle around the eye that we use for blinking and squinting, and hooking sensors up to it during reading allows measurement of what we might think of as eyestrain. Initial results from this line of research tell us that black on white text is more legible than gray on gray, and also that twelve point text is usually better than nine point. I like to cite these points because they support my own pro-legibility prejudices, but I will be the first to note that they do not necessarily mesh with current typographic fashion, especially in Web design.

Orbicularis research notwithstanding, as best as we can tell, most of what passes for typographic wisdom has a strong basis, not only in the tradition and culture of typography and design, but even in recent science. Many years ago I found it frustrating to justify why typography matters, but today I relish it. ca 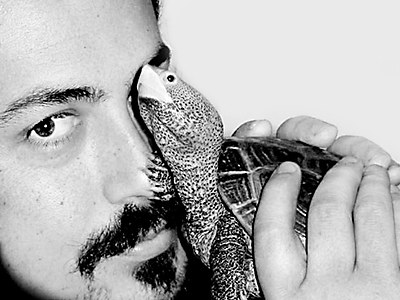 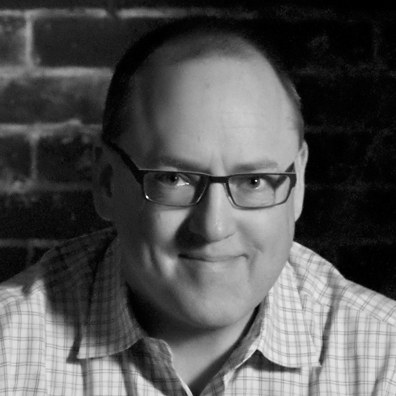 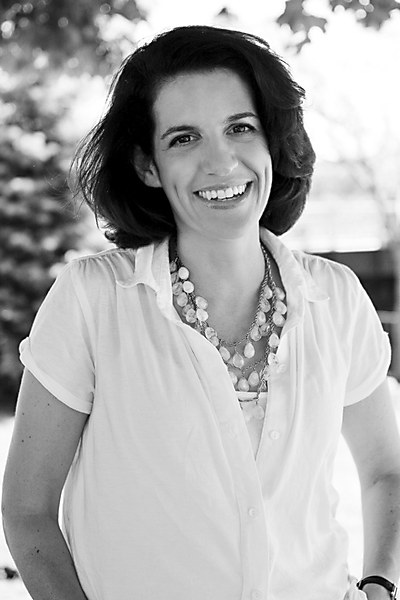