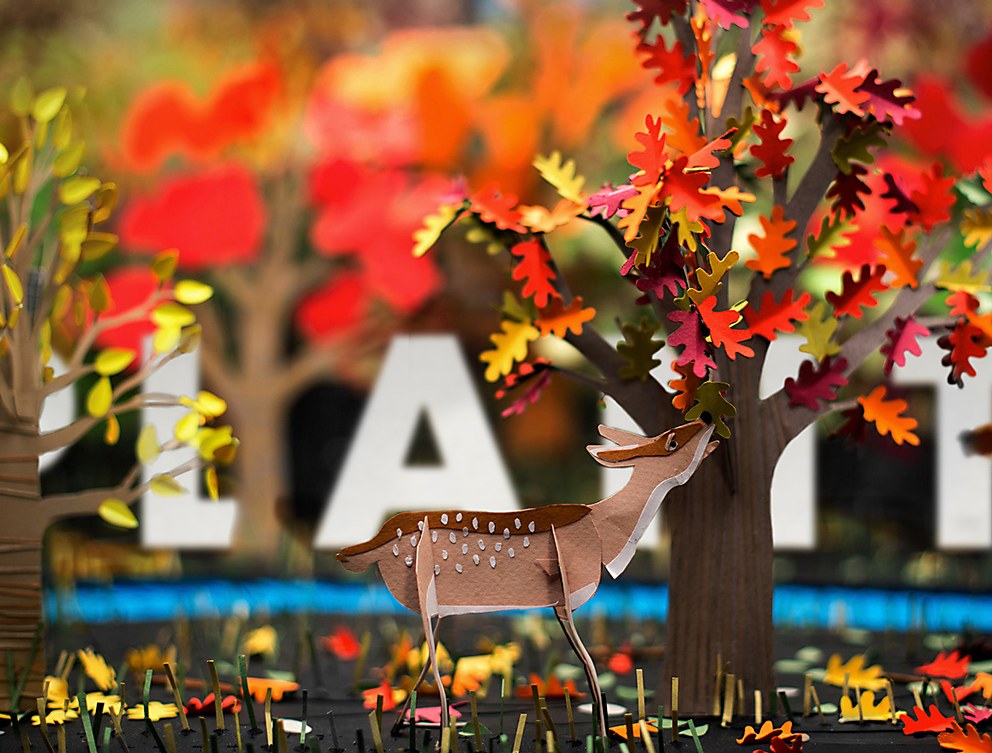 The smell.” That’s what Willy Schwenzfeier thinks of when I ask him what differentiates a letterpress studio from any other designer’s space. He’s talking about the smell of the ink on days when Swayspace, the Brooklyn design studio he co-owns with designer Patrick Fenton, is running one of its five presses—solid, complex machines, the oldest of which dates back to 1895. When I meet Schwenzfeier, it’s after hours, so the presses are still, but there remains a palpable sense of the physical acts of making that go on here. Cabinets full of metal type and wood dot the floor, and tall shelves display cans of ink and samples of letterpress cards. Schwenzfeier points out a glass-topped cabinet, explaining that they mix ink there with a metal spatula. “[It’s] almost like you’re in the kitchen, cooking and mixing ingredients,” he says. “Doing that is super satisfying.”

Across the floor from this ink-mixing station and the presses are the other machines that drive Swayspace’s business: shining iMacs lined up on top of shared desks. Schwenzfeier and his staff may do most of their printing in-house, but, like the vast majority of today’s designers, their primary tools are digital. It’s 2016, and this is a given: designers use computers, as surely as humans breathe air. Over the nearly 20 years that I’ve been writing about design—a period during which the computer went from relative novelty to necessity—I have repeatedly heard designers say of the computer, more or less dismissively, “It’s a tool.” But now that practically all designers rely on the digital for most of what they do, it’s not just a tool—it’s the tool.

This has had an interesting effect on designers’ relationship with any form of making that is not digital, be it drawing, painting, sewing, carving or printing. In theory, “analog” work, as it’s now called, need not happen at all during a designer’s process. Yet numerous designers still incorporate analog into their lives and their work. Some make things by hand in their spare time; a few, like Schwenzfeier, work in a situation where physical and digital processes take place side by side; others have managed to bring analog work into their process, blending it with digital media in imaginative ways. However they bridge that divide, designers have deeply felt reasons for doing so—reasons that connect with how they function as creative people.

Designers Hans Bennewitz, Benjamin Della Rosa, John Forrest and Kyle Marks run Interval Press, a Sacramento-based silkscreen studio. All four partners have “day jobs” doing a range of design work, from web to editorial; but when at Interval, laying down color after color to make their sharply conceived posters, they’re able to move around and get their hands dirty. “We are in front of the computer an awful lot,” says Forrest. “We see the printing as a respite from that, in the … physical labor of it.” Across the country, in New York City, Jessica Walsh, of Sagmeister & Walsh, also values time away from the screen. “My best work comes from play and experimenta­tion,” she explains. “When I am stuck, getting off the computer and just making shit can be very rewarding and inspiring, and increases the possibilities for landing on some­thing new, surprising and unexpected.”

Dr. Carrie Barron, psychologist and coauthor of the book The Creativity Cure: How to Build Happiness with Your Own Two Hands (Scribner, 2012), affirms Walsh’s experience. “There is a qualitative difference from the tangent your unconscious offers and that which comes from the screen,” she says. “If the creative impulse originates from within … it probably has more uniqueness and substance.” Walsh is not the only designer who is well versed in that “qualitative difference.” Brooklyn-based designer Kelli Anderson has used cut paper for stop-motion animated videos, and for her latest project, This Book Is a Planetarium and Other Extraordinary Pop-Up Contraptions (Chronicle Books, to be published in March 2016), she created pop-up paper “tools,” among them a smartphone speaker, an instrument and, indeed, a working, miniature planetarium. Although software is crucial to her process, she says, “I think it may be harder to get at the unknown using only digital tools because they are designed to support the direct execution of intention. For me, those ‘Huh, that is surprising!’ moments of revelation are more scarce in a digital environment.” Mia Case, a lead visual designer at GE in Northern California, paints in watercolors in her own time. She agrees with Anderson’s point: “I paint without knowing if I’ll make something good, whereas I design knowing what my expectations are, so it’s not as much of a surprise.”

Case does use one analog approach regularly to kick-start projects at work: paper prototyping. “My process always starts with a rough sketch,” she says. “This is where the pen and Post-its are mandatory.” Vanessa Koch, a San Francisco–based product designer for team-collaboration platform Asana, also initiates projects off-screen: “Jotting ideas on notecards allows me to play with them in a way that makes sense to my brain. By the time I move to the computer, I have answered many key questions.”

Case, Koch and others who design primarily for the digital space say they feel the need to make things by hand outside their day jobs. Case’s colleague Eric Stevens, a senior interaction designer at GE, makes beautiful sculptural forms and furniture from wood in his spare time. He says one of the things he likes best about analog projects is that “your work is not on a hard drive or in the ether. … It’s right in front of you.” Joan Herlinger is a San Francisco–based user experience (UX) designer who works through employment agency Creative Circle, whose focus is creatives. She says that she makes toy animals and children’s book illustrations from felt to “keep me growing.” Herlinger, who also volunteers in San Francisco’s Museum of Craft and Design, where she leads Craft Lab workshops for adults, explains, “I couldn’t do the UX work without doing the other stuff—it’s what makes me happy. I identify myself more as an artist who does UX, rather than a UX designer who has hobbies.”

Koch, like Herlinger, has found ways to foster analog creativity outside her day job. During a trip to the Amazon jungle, the sight of a monkey swinging its way through the trees triggered a vivid childhood memory of her and her sister playing catch at bedtime with a stuffed toy monkey. She quickly captured the memory with a black-and-white sketch in her notebook: “I drew the shapes how I remembered the scene—flowing, dreamlike, playful.” On her return, she learned about artist Elle Luna’s social media prompt to make or do something creative every day for 100 days. “I knew immediately that I had just created my first of 100 memories,” she recalls. She initially kept the constraints of black marker and paper, then introduced color using acrylic paint, cut paper and, yes, Photoshop. The resulting collection of work, 100 Memories, which Koch published on her personal website, is graphic and abstract, like saturated-color Rorschach tests melded with Matisse cutouts.

The designer says that 100 Memories did inform her work for Asana: “This emotional, visceral way of working naturally found its way into my other projects. How do I want someone to feel when they embark on this experience?” That continuum between the digital and the analog exists for many designers. San Francisco–based designer Alice Cho, who has worked at Twitter and WIRED, enjoys embroidery and other crafts and notes, “In my professional work, I feel like there’s an element of crafting, even if it’s on the computer.” Designer Keetra Dean Dixon, who splits her time between Alaska and the East Coast, uses a mixture of digital and analog tools and materials in her process and says, “It’s never a one-way street from nondigital into digital, but lots of jumps between the realms.” In collaboration with artist JK Keller, Dixon made a series of type experiments by building up multiple layers of hot wax around type forms. The final works look like polished sections of striated stone with words hollowed out of their core. The pieces have a hugely tactile appeal, and the laborious process of layering wax is the essence of analog. Yet in her initial ideation for the pieces, she used digital tools, then “moved that digital process into a physical craft. … Moving back and forth between mediums sprouts ideas for new methods to try in another format,” Dixon says. Dr. Barron’s research supports the designer’s experience; she says, “Working in another medium can loosen you up, alert you to a new angle, open up another entry point. It can create a richer, more nuanced or layered version of the original task.”

Will students now coming up through design schools feel that analog work is important or useful? Schwenzfeier, who teaches industrial design at Pratt Institute, says that his students are often “seduced” by 3-D printing, thinking it can create something closer to their concept than, say, making a clay model. Steven Brower, director of the MFA program for working professionals at Marywood University in Scranton, Pennsylvania, notes that, as at many other institutions, Marywood’s first-year students concentrate on studio classes and don’t begin working exclusively on the computer until their second year. “The problem going forward,” he says, “is that their assumption is they should only work on the computer. It limits their choices and individual voice.” By contrast, Interval Press’s John Forrest, who teaches graphic design at California State University at Sacramento, notes that his students know he does screen printing and “are actually very interested in doing the physical process. … They’re always asking … ‘How can I try this out?’”

Undoubtedly, those students will do most of their paid work on a computer. But just as it’s a given that designers use computers, human beings also continue to be driven by the tangible world we inhabit. Stevens puts it best: “People hold on to physical things. Watch Antiques Roadshow—people are lining up to under­stand the things they find value in. This is an innate thing that humans do.” Sometimes, you just want to smell the design. ca 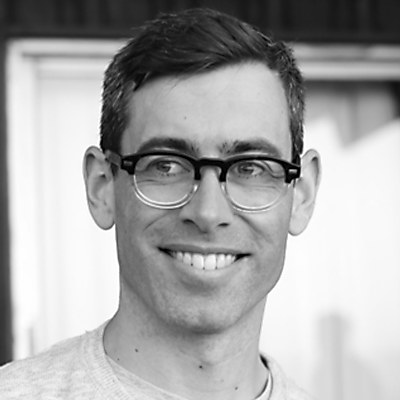 Columns / Advertising
If Advertising Is So Great, Why Are We So Unhappy?
Ernie Schenck says for ad agency staffers, finding happiness requires sacrifice & creativity. 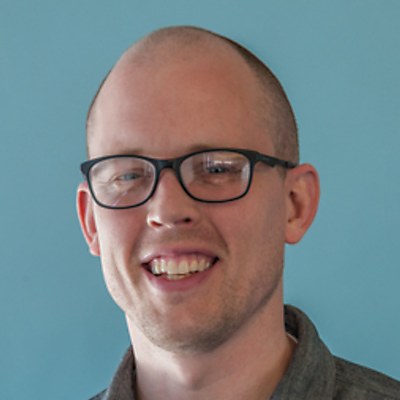