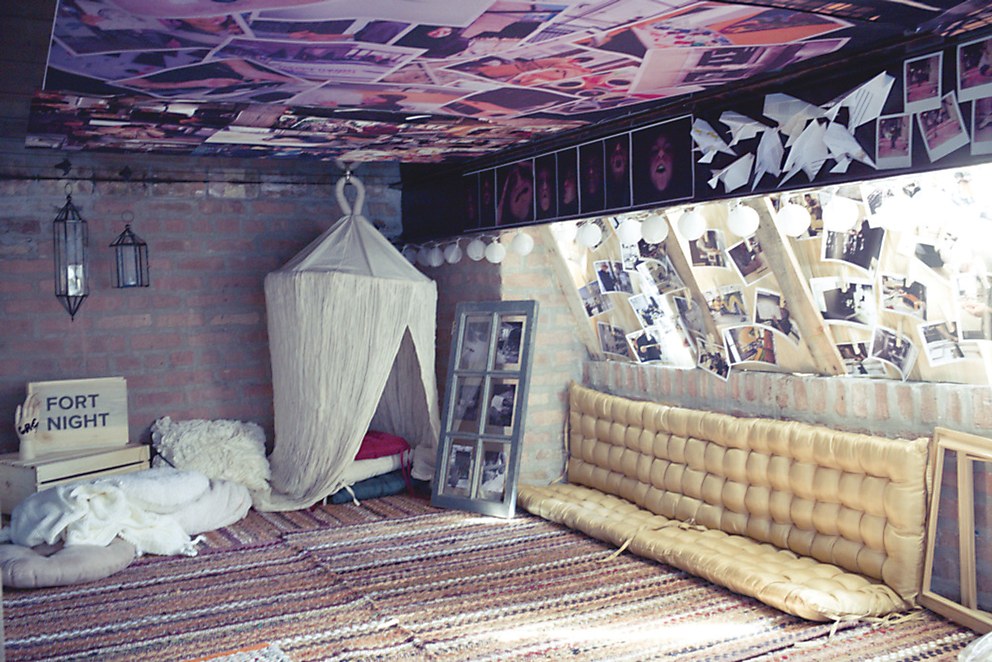 By Elise Craig
When the founders of ad agency Mother bought a dilapidated warehouse in the Shoreditch neighborhood of London in 2004, they had a clear design brief for their Los Angeles–based architect, Clive Wilkinson. They wanted every single employee of the agency—all 200 of them—to sit at just one table. Eight years earlier, the founders had started the company with five people around a kitchen table, and they didn’t want the agency to lose its sense of family values.

Is the open office a design fail? Table mates at San Francisco-based ad agency MUH-TAy-ZIK | HOF-FER (left) sometimes think so. Distractions and lack of privacy can send creatives out in search of quieter spaces, such as the popular Booth Noir at Stanford’s d.school (right).
“The clarity about the table was wonderful,” Wilkinson says, “the realization that it was actually a model that works. It’s not for everyone. A lot of people flip out when they see the open table idea. But there’s no question that the agency has flourished.”

The elliptical slab of poured concrete is based on the curve of a race-track from the 1920s, and at 250 feet long and 14 feet wide, it takes up most of the agency’s third floor. There are no offices. Employees have assigned seats, but they change every six weeks, and teams don’t necessarily sit together. The idea is to get people talking about their projects and mingling with people they might not otherwise interact with.

To that end, no seat is more than 30 feet or so from a grouping of living room-style furniture, so employees can break away from the table for small group meetings. There are no walls or doors in the space, though hanging rubber curtains do provide privacy for meetings. Meals are provided in a big kitchen that keeps employees chatting through lunch, and Wilkinson knocked out two structural bases to put in a massive, 14-foot-wide staircase in the center of the building to make all three floors feel like a cohesive space. An entire wall of the office is dedicated to photos: giant portraits of each employee’s mother.

Mother is the poster child for open office design, which has gone gangbusters in recent decades, as high-profile tech companies promote quirky features, and creative companies move away from the divided spaces of an earlier era. Architecture and design firms are pushing for more open spaces and fewer offices to get people with different jobs to mingle, walk around, flatten hierarchy and, most importantly, come up with creative solutions.

But the concept has its critics. Studies have found that the noise and distraction of open office plans can actually have a negative effect on productivity and creative thinking, not to mention that working in the open can be difficult for introverted employees.

Lawrence Abrahamson, design lead of environments and services at the multidisciplinary design firm IDEO, has thought about the issue quite a bit over the past year or so, as people have begun to ask if open space design has gone too far. To him, designing a functional workspace necessitates a spectrum of spaces that fit different tasks and personalities. “It’s not about open versus closed, but variety,” he says.

At IDEO, there are Wi-Fi and dataports so people can easily move around. Office furniture has cranks, hinges or wheels so employees can rearrange their spaces to fit their needs. They work out in the open, but also have plenty of space to meet with a smaller group to go heads down on a project. IDEO’s Chicago office has even built a fort under its staircase that you actually have to crawl on your hands and knees to enter. “If you’re scheduled for a meeting there, you know it will be different,” says Abrahamson.

Randy Howder, a principal at design and architecture firm Gensler, works toward that versatility by giving office spaces a double function. Kitchens can be meeting rooms. Corridors can be breakout spaces. “We create the ability to toggle easily back and forth between being in a group or being by yourself,” he says. Breakout spaces—whether a hallway with white boards or a small conference room—are a big part of that.

But it’s a short leap from secret forts under the stairs to foosball tables, video-game arcades and the like, which have become standard features at creative firms—the utility of which is more questionable. Stanford d.school creative director and consulting professor Scott Doorley has heard a lot of concern lately that these flashy design elements are simply cool for cool’s sake. “I like that people are wary about them,” he says, but he believes they merit inclusion. “They suggest so much about the meaning of a place and can be so fun and whimsical,” he says. “They set a tone even though they might not be highly functional.” Doorley co-authored the book Make Space: How to Set the Stage for Creative Collaboration with d.school lecturer Scott Witthoft, who advises treating such playful elements with caution. “If the intent isn’t there and there’s just a bunch of flash, it’s not going to be good,” he says. 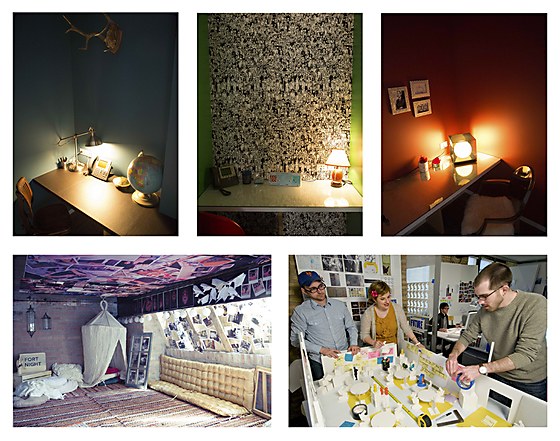 Plain white phone booths—the only private spaces at multidisciplinary design firm IDEO—were transformed into themed rooms based on historic Chicago landmarks (top, from left: Newberry Library, Soldier Field and Playboy Mansion). No more boring conference calls! Another intimate space, a cozy “fort” hidden in a nook under the stairs (bottom left) was outfitted in Moroccan-style by Fortnight program interns to provide an oasis for casual meetings and quick, quiet escapes in the middle of the day. When a client needed a temporary space built in a hurry for an important board meeting (bottom right), this IDEO team built a lo-fi prototype to think through how people would be moving through the space.
The offices of experience design and branding firm ICRAVE feature easily ridiculed design elements like a graffiti wall, a DJ booth and an archery range, but creative director and senior strategist Jesse MacDougall insists they are not gimmicks. He says opportunities for what he calls “excursion” within the office environment are key to the company’s creative process. And, more importantly, ICRAVE’s offices were designed with that same focus on versatility—the ability to move between public and private workspaces—that has been so successful at Mother and IDEO.

Like at Mother, ICRAVE’s staff—including company head Lionel Ohayon—sit out in the open, but their spaces are easily customizable. The “crit box” is a three-sided room where employees are encouraged to pin up their work. The open wall allows people passing by to get a sense of other projects and derive inspiration from them. The conference room has a mechanically operated chalkboard that comes down from the ceiling to hide or open up the kitchen, and its massive doors are on a metal track, so they can open the space up, or rotate so that the presentation side faces the lobby or pivot to display art exhibits horizontally.

John Matejczyk, executive creative director and co-founder of San Francisco ad agency MUH-TAY-ZIK | HOF-FER, says private spaces that allow creatives to be as goofy as they want without, say, the business end of the operation passing judgment, are hugely important. “Creatives have to be able to shut the door,” he says.

It’s a lesson he learned the hard way, when his firm remodeled its new space and placed his employees at one long table with 32 workstations. It’s been problematic for a few reasons. First, it begets a lack of privacy for teams working on creative projects. Matejczyk wants his teams to be able to watch YouTube videos and talk about movies—all part of the creative process—without others in the room thinking they’re just goofing off. “The creative process is quite vulnerable. You say a lot of stupid things before you get to a smart one.” Second, when you’re at the middle of the table, it takes a lot of work to walk all the way around. And third, it’s loud. “It never occurred to me someone would stand up and yell all the way down the table,” he says.

Staff reactions to the table setting are mixed, but there were enough complaints to prompt Matejczyk to mitigate the negative effects with a revised floor plan. In hindsight, Matejczyk wishes he’d stuck with one of Gensler’s original plans—separate tables with employees in groups of four, a configuration he initially thought was a little too staid—and put in a few more doors and walls to contain private meetings and constant conference calls. 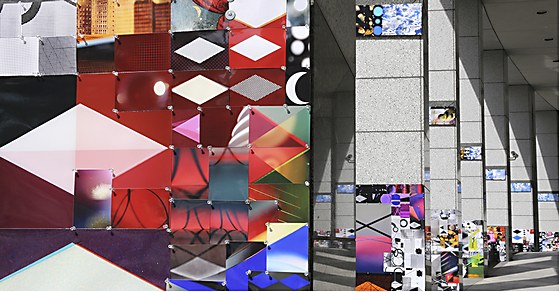 Inspirational collages, such as the pinned photo boards covering several walls at Appetite Engineers, a design firm led by designer and educator Martin Venezky, encourage experimentation at the office. “It began as a casual way to keep interesting bits and pieces in front of me. A lot of my ‘rejects’ are still interesting and have potential in other projects, so this was a way of remembering them as I worked,” says Venezky. Over time, the surrounding walls became “a kind of stimulating work environment I couldn’t work without.” Venezky’s recent installation on fifteen columns at the entrance to Adobe headquarters in San Jose—part of the company’s Random Acts of Creativity campaign—sparked the imaginations of Adobe employees in much the same way. “The sober architecture was put through a fantastic kaleidoscope that reveals its delights slowly, inviting pedestrians to look up from their phones and inspect the details.”
Matejczyk’s experience is a good reminder that although spaces should set a tone that reflects the values of the company, they also need to be designed with the behaviors and functions of the employees in mind. Doorley and Witthoft suggest that companies start by rethinking their spaces with a two-pronged approach: consider the artifacts you want in your space—couches versus office chairs, tables versus old-school desks—but also think about the behaviors of your employees and the functions they fulfill.

They advise starting with small changes to figure out what works in a given space. Over the past few years, the Stanford d.school has had to relocate four times, offering Doorley and Witthoft multiple opportunities to experiment with different designs in each space. “It forced us to prototype and rebuild the space constantly,” Witthoft says. “We found such value in that.”

For smaller firms, building a more creative workplace can be as simple as finding dormant space that isn’t being used well. If a single employee starts putting up work on a wall in a conference room, they say, others will feel empowered to do the same. “It’s a track-able phenomenon,” Witthoft says, “a coral reef emergence.” To Witthoft and Doorley, it’s a lot like the guerilla parks that pop up under freeways: one person’s creativity will inspire another’s and embody an ethos of creative freedom that companies often say they want to have. ca

Elise Craig (elise.c.craig@gmail.com) is a freelance writer and editor based in San Francisco. She has written for Businessweek, fortune.com, outsideonline.com, Wallpaper* and other publications and has held positions at the Washington Post and Wired. 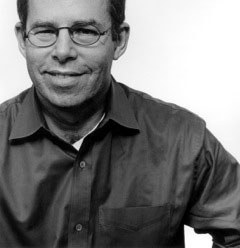 Columns / Insights
Deceptive Simplicity
Michael Bierut shares what he loves about Pentagram and why designers should listen to clients. 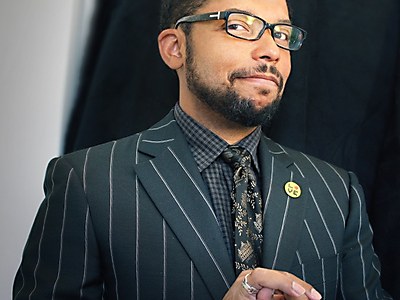