How did you get started in the design field? I started out as an intern for Money magazine. My college, St. John’s University, had a required internship program, and I had to make a choice between an advertising agency, a boutique design studio and this bustling, loud magazine. Even as a student, I wanted to be where the action was. Time Inc. was at its publishing zenith back then. While I didn’t know much of anything at that time, I knew it was a dynamic environment, and that I was going to learn a lot. Boy, that instinct was right.

What led you to open your studio, McCalman.Co? After fourteen years as a magazine art director, I was ready for a new challenge. I didn’t feel like I was learning much anymore. Magazine design and stories were exciting but repetitious, and I was starting to stagnate. I made a rash decision that I was going to start my own studio. It felt like the right thing, but I had no real idea or plan. I spent a year talking with sole proprietors about the ins and outs of running a self-sufficient business. I felt ready, but once I stepped fully into it, I realized that I had no real idea what I was doing. Eight years in, I only recently feel like I’m getting the hang of it.

How does your expertise in editorial design inform your approach to branding? It informs everything I do. Whether you are the steward of the words or the visuals,—and graphic designers are stewards of both—working for a magazine teaches you how to package and present stories for an audience. You learn how to edit, write, organize, present and produce stories. It becomes a sixth sense. I’ve brought all of those skills and perspectives to the branding world. Before I start anything, I want to know the purpose and motivation of the brand, and that begins with the person who created the business. It sometimes throws my clients off that I begin our collaborations this way, but it keeps everyone accountable. Branding shouldn’t be an external process; it’s an internal one. Defining the personality of a company should be a personal experience. That’s my philosophy, and I bring it to everything I do.

What personal experiences or circumstances have most influenced your work or style? I’ve been a professional designer for more than 20 years, and it’s taken me this long to realize that places influence me more than things or people. I was born and raised in the Caribbean, and the landscape and the colors of the architecture loom large over my creativity. I was trained as a classic graphic designer before computers came along, so my first instinct is to use the sketching process. So I can strip things down to their blueprint essence, but I know how to use an accent color to wake the audience up.

Your work spans graphic design, illustration, painting and journalism. How has picking up new skills helped you learn about yourself? I’ve always used all of those skills; I just didn’t realize it until a couple of years ago, when I started combining them. As a designer, I was raised to stay in my lane, to get real illustrators, artists and writers to create and to act as a proxy, a guide and a facilitator. I always thought that was bullshit, but I wasn’t bold enough to test out my theory. But when I hit my mid-40s, I started questioning a few things I had told myself, and I turned the table over to start fresh.

You’ve spoken about the importance of devoting time to yourself as an artist. What does that look like in practice for you? Blocking off time where there is no deadline or overall framework that has me rushing to a finish. Being a print designer has taught me efficiency, but being an artist has allowed me to have a process that I’ve only watched other people use. It is a really liberating thing. I’m glad I’ve given myself the opportunity to explore this. It’s made me a better designer, and it’s made me a better person.

As a designer, I was raised to stay in my lane, to get real illustrators, artists and writers to create and to act as a proxy, a guide and a facilitator. I always thought that was bullshit.”

How do you get inspiration for your Observed column in the San Francisco Chronicle? I grew up in New York admiring and reading photographer Bill Cunningham’s columns. When he passed away, I thought it was a shame that no one was observing culture in that way anymore. Then, I decided that I would try it, but with illustration. I pitched to the person who became my editor at the San Francisco Chronicle, and she said yes immediately. I knew the column was the first one of its kind; I knew I was creating something unique.

How can visual journalism be a force for diversity? I find it so strange that the word diversity has gone from not being a topic of any public discussion to being a topic of every discussion. I’m a Black and gay man. It’s not a coat that I only put on when someone asks me that question, so I don’t know how to see it any other way.

You’re tackling an illustrated guide to 400 years of Black history called Illustrated Black History. What challenges have you encountered while working on this book? It’s the most daunting thing I’ve ever done, but in a strange way, I’ve been training for it over the last couple of years with my Observed column. I’ve had to bring my editorial, academic and emotional eye to the project, which has helped me get focused and grounded in what could be an overwhelming subject. And it is an overwhelming subject. Getting settled and treating it with seriousness has been my main goal. I’m also designing the book, so it forces me to wear a couple of different hats, which is the only way that I would have done it. I’m really excited about this project. I think it is my life’s work so far, and why I was put on Earth. Everything I’ve done has made me ready for this.

What’s one thing you wish you knew when you started your career? That I wouldn’t have to compromise my creativity to be successful.

George McCalman is a fine artist, illustrator and graphic designer, and a former magazine creative director. His design studio, McCalman.Co, serves primarily art, lifestyle and food clients. Additionally, his monthly illustrated culture column, Observed, is featured in the San Francisco Chronicle. Raised in Brooklyn, McCalman received his BFA in philosophy at St. John’s University in Queens, New York, which informs his design principles to this day. He credits his Caribbean background for his ability to both embrace and rebel against traditional modes of design. His first book, Illustrated Black History, is due in fall 2020.

Columns / Voices
Is Your Title All It Can Be?
Dave Kuhl’s Advertising Career Analysis Generator predicts the creative job titles of the future. 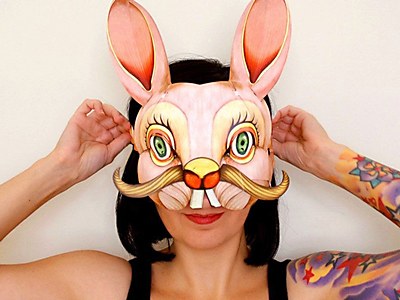 Columns / Insights
Cranking Up Creativity
Crankbunny advises creatives to trust in their own voice in order to create engaging work.