What has it been like covering the recent Black Lives Matter protests? It has been a whirlwind. I’ve covered protests in Minneapolis, Minnesota; Atlanta, Georgia; Louisville, Kentucky; Rochester, New York; and Washington, D.C. I could feel the overwhelming sadness and despair as these communities were left to deal with the reality of more Black Americans being killed due to police brutality. When protesters took to the streets of Minneapolis to voice their outrage, the entire city resembled a warzone, and I could feel the heat from local fires firsthand. Citizens in Atlanta who were already protesting for the death of George Floyd were shocked to find that Rayshard Brooks had just been killed too. In Louisville, people marched for Breonna Taylor, a Black woman who was gunned down by police officers in her own home. For a while, her name was unknown, but I could hear protesters chant, “Say her name!” This movement, no doubt, is comparable to that of the 1960s.

What are the most interesting photos that you’ve taken during your coverage of the Black Lives Matter demonstrations? That’s a difficult question because I’ve taken so many photographs since May, but I feel that the following are the most poignant: Unnerving climates surrounding social unrest in African American communities reveal the scarcely discussed enigma of the Black law enforcement officer. The local Say Their Names Cemetery in Minneapolis serves as a symbol of honor, unity and resilience while sending a message of resolute determination for justice for Black lives. Generations and multitudes create a historical moment as they display overwhelming solidarity for social justice during the march to Washington, DC. Breonna Taylor’s mother, Tamika Palmer, stands strong in front of the makeshift memorial for her daughter. Beyond discontent at the handling of yet another police killing, demonstrators protest for Daniel Prude, a Black man who died at the hands of law enforcement during a mental health emergency in Rochester, New York, in March.

How did you first discover your passion for photography? Photography has had a special place in my family for generations as my grandparents in Rochester, New York, worked at Kodak, and my mother’s father was an apprentice in a photography studio in New York City. My mother introduced me to the arts and bought me my first camera. I knew then, at the age of seven, what I wanted to do with my life. My passion for photography grew when I attended undergraduate school at Elizabeth City State University, a historically Black college and university in North Carolina, where I took my first black-and-white photography class and fell in love with the darkroom. I later attended graduate school at the Savannah College of Art and Design, where I earned my master of fine arts degree in photography.

What draws you to portraiture? I’m fascinated by how a photographic portrait can tell a story and even serve many functions beyond that. I particularly like using portraiture to not only correct history, in the sense of giving the proper voice and representation to disparaged groups, but also to build an archive that will articulate the many identities of Black people. I love how Frederick Douglass and Sojourner Truth used staged portraits of themselves to convey a clear and direct message to people of their era as well as future generations. They used portraits to present themselves in the way they wanted to be presented at a time when photography was used as a weapon against Black people.

What was the inspiration behind your project After Selma? I started my After Selma photographic series in 2015 during the 50th commemoration of the march from Selma to Montgomery, Alabama. That march originally took place in 1965 and was led by Dr. Martin Luther King Jr. during what was recorded as a five-day trek to the state’s capital. This nonviolent demonstration to obtain voting rights attracted thousands of local Black citizens, including students and organizations. Considering all of this, I began thinking about the unrest in Ferguson, Missouri, that occurred from August 2014 through 2015. I thought about where we are in history and how Black Americans are still fighting for justice and human rights 50 years after this march from Selma.

Photography sparks action, and I can only hope that photographs help push this country and world in the right direction.”

How did Black identity and masculinity become the main themes of your series Come to Selfhood? In 2015, I began to think about how Trayvon Martin was villainized because of his skin color and what he was wearing, a black hoodie; about all of the times that I’ve been racially profiled; about my three brothers and how they have been profiled; and about my father and how he has also had the same experiences as a Black man in America. I wanted to make a project that began to address these narratives surrounding discrimination and to provide a space for the personal narrative. The topics expressed in these narratives include stereotypes; new definitions of Black masculinity; the attitudes about race, gender and sexuality; and relationships with fathers. Many of the fathers featured in the series served in the armed forces and appeared in their portraits wearing military uniforms.

In my artist statement, I say, “How does one begin to challenge the misguided perceptions that decrease the quality of living for young African American men? Furthermore, how does the African American man position himself in a society that does not acknowledge his true identity? African American men and stories of their intersecting identities unrecognized in forums that allow these positive images to become a part of the dominant narrative of African American men. As a photographic artist, I chose to use contemporary portraiture, the vernacular image, qualitative data and positioning to expose this narrative with Come to Selfhood.”

Although it is improving, society has yet to fully understand the Black existence in America as a perpetual conundrum and unnecessary grappling between self-identity and social labels. Come to Selfhood, however, gives freedom to the Black citizen, no matter where they place themselves on the spectrum of masculine identities, to simply be.

You’ve said that “photography has always been used to tell the stories of social injustices and to advance human and civil rights for all.” How has photography furthered your own advocacy for civil rights? Personally, I have witnessed and experienced how photography plays an integral role in social justice work as it gives visibility to the issues that need to be addressed. The phrase “Out of sight, out of mind” unfortunately rings true even in this instance. Protestors are on the streets day in and day out to maintain the visibility that can evoke change on a local and national level, and their diligence has garnered global attention. The role of photography, in this case, is to further their efforts by placing their work on a digital platform and making it accessible and visible to citizens of any locale, keeping these issues urgent and front of mind.

As a Black man in America, social justice has naturally been a part of my life. Between my heavy involvement in voter registration with the NAACP and in voter education through my own organization, my undergraduate years were a healthy start toward a life of social justice work. This venture became personal when word of a racist vigilante killing young Trayvon Martin hit the news and the neighborhoods in 2012, sparking the widespread Black Lives Matter protests. As a college senior, my professor encouraged us to create work that spoke to us.

When I later moved to Atlanta, Georgia, I began interning at the King Center for Nonviolent Social Change, where my knowledge and application of the civil rights movement of the ’60s helped catapult my social justice activism through my photographic works, beginning with my After Selma series. My efforts, message and voice for social justice have now reached national and international audiences. Photography sparks action, and I can only hope that photographs help push this country and world in the right direction.

Joshua Rashaad McFadden, a visual artist and assistant professor of photography at Rochester Institute of Technology, uses portraiture and archival imagery to explore identity, masculinity, history, race and sexuality. A Rochester, New York, native, McFadden holds a Bachelor of Arts in fine art from Elizabeth City State University and a Master of Fine Arts from Savannah College of Art and Design. In 2017, McFadden was recognized as one of TIME’s American Voices and received Duke University’s Archive of Documentary Arts Collection Award for Documentarians of Color. His series I Am A Man in the Smithsonian magazine won him the 2018 Communication Arts Award of Excellence. McFadden’s work has appeared in National Geographic, the New York Times and The Washington Post.

Sponsored by SCAD
Columns / Education
The Importance of Connecting With an Audience
Two alumni discuss how their SCAD experience continues to influence their professional lives. 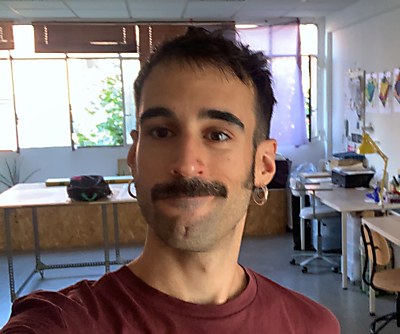