By Nancy Goulet
When most people spot a typo on a sign, they may smirk or make a snide comment. But ulti­mately, most chalk up the mess to human error and walk away.

Not Jeff Deck, a 29-year-old typo-connoisseur from Somerville, Massachusetts. For the past couple of years Deck and his faithful typo-fighting friends (called the Typo Eradication Advancement League or TEAL) have ventured to write or, uhh, right the wrongs of bad signage. Last year Deck and a revolving cast of TEAL members traveled the country in his ’97 Nissan Sentra with the ambitious goal of eradicating the misuse of apostrophes, misspellings and other typo-atrocities.

THE MISSION’S ROOTS The idea for the typo crusade came after Deck’s fifth-year Dartmouth reunion. Deck described reconnecting with class­mates and discovering their worldly contributions. “I wanted to do my part,” he said. “But what could I do?”

Days later Deck was strolling through his neighborhood when he spotted a misspelled sign. It read: NO TRESSPASSING. The mistake irked him. “They spelled it with two Ss, as though it were a lock of hair,” he recounted.

That extra S ignited a plan. In the months following Deck founded TEAL, saved up $10,000 and plotted his course. He set out in March 2008 on a clockwise route starting and ending with Boston.

Armed with what he dubbed his “Typo-Correction Kit”—really a makeup bag filled with Wite-Out, Sharpies, chalk, crayons and other tools—Deck and the League meandered through mostly urban areas and corrected as many typos as possible.

During their two-and-a-half-month mission, they discovered more than 400 errors and corrected over half. The League was met mostly with apathy, some appreciation and occasional annoyance. Each day’s experiences were documented on www.jeffdeck.com/teal.

All went smoothly until they reached the Grand Canyon. Unbeknownst to them, Deck and friend Benjamin Herson were about to make their own whopping mistake. The duo spotted a series of errors on a hand-painted sign just outside the Desert View Watchtower. Ignorant of the sign’s signifi­cance, they copy edited the text adding a missing comma and fixing an apostrophe. Turns out the 60-plus-year-old sign was a registered National Historic Landmark created by Mary Colter, known as the “Architect of the Southwest.”

Deck and Herson were brought up on charges and plead guilty to conspiracy to vandalize government prop­erty. They have now served a year’s probation, paid a $3,035 fine and steered clear from all National Parks for a year.
Deck and Herson are currently working on a book about their travels, tentatively called The Great Typo Hunt. The book is due out in fall 2010 by Harmony Books, a division of Random House.

HEROES OR VILLAINS?The news reports surrounding the case sparked a firestorm, especially online. Many scorched Deck and his partner-in-crime for defacing the historic sign and for having the arrogance to take on such an outlandish task. Yet others heralded TEAL for their noble intentions. 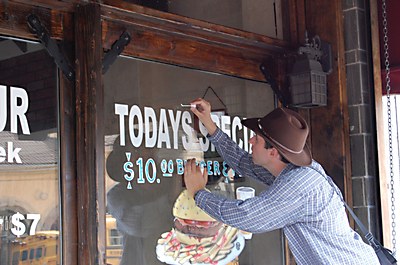 I must confess I was drawn to this story for reasons you might not imagine. Being a designer you might expect me to lambaste Deck for defacing work. Although I’m not a vandalism advocate, that’s not what stuck with me.

I was taken by Deck’s utopian dream—to rid the world of typos. As a writer and designer, I’ve spotted my share of typos and typographic bastardization. Yet, I’ve never once pointed out a mistake unless it was my project. I let the mistakes persist for fear of insulting the sign keeper or of appearing rude and elitist.

Deck’s story got me thinking. I wondered whether we self-proclaimed communicators might take a cue from the typo vigilantes. Maybe TEAL might motivate us toward our own typographic heroism and typo abolishment.

A few years ago Ellen Lupton, typography aficionado, design educator and writer, lectured a packed auditorium at the AIGA Conference in Boston. In her talk she clicked through photos showing a series of type crimes found on NYC storefronts—the majority of which featured the use of hatch instead of quotation marks. With each image the audience roared with laughter as though she were Jerry Seinfeld, pointing out life’s obvious absurdities.

Although we chuckled heartily at the faux pas, the truth is, to the average person dumb quotes don’t look stupid, never mind funny. These kind of typographic nuances are an in-joke among designers, one we’re paid to know. Knowing the difference between a hatch and a quotation mark, detecting widows, orphans, rivers, bad rags, that’s the value designers bring to the table. Similarly, correctly spelling trespassing is our calling as communicators. The question implied by TEAL’s story is where does our job end?

“TEAL are heroes, without doubt,” said Paul Felton, designer at London design firm Purpose and author of The Ten Commandments of Typography. “If only more people adopted the same tactics to tackle type crime, the world would be a grammatically better place. [They’re the] Batman and Robin of the type world if you will!…The written word is arguably one of man’s greatest creations, so if it is not worth policing then I don’t know what is!”

But taking a Sharpie to street signs isn’t the way Lupton would prefer to correct the problems of bad typography and communication. She’d rather continue educating the public through her writing and teaching. In a perfect world basic typography would be part of school curriculums, Lupton said. “It really just takes an awareness of the problem.”

Ilene Strizver, founder of The Type Studio, educator known for her Gourmet Typography workshops and author of Type Rules! The designer’s guide to professional typography, seconded the notion. “I’m like a type evangelist. To me, education is the only answer.”

At the heart of these signage mistakes, many in the biz recognize, is that much of today’s messaging is created by the layman. With so many do-it-yourself options available, nuanced mistakes like dumb quotes are bound to appear. And perhaps that’s why teal’s trek is so bold, compelling and impossible.

“It’s a bit of a stunt,” said Lupton. “Defacing property is not a good idea...But I admire their courage.”

DESIGN POLICEIn an effort to bring more attention to type crimes, Stephen Woowat, a designer in Leeds, United Kingdom, developed the Design Police, which he made sure to point out is “not an official organization.”

While the Design Police’s mantra is “Bring Bad Design to Justice,” their main function is providing a sticker set to call out typical type issues. The free PDFs include notes for “Alert: typo,” “Kern this” and a “Widow,” among other markers for design crimes that can be printed and affixed when a mistake is identified. 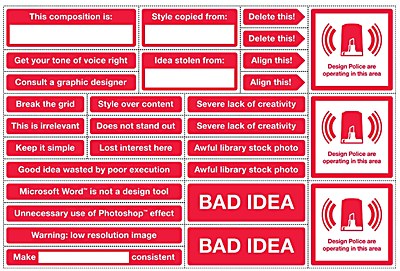 “The idea was a response to the feeling every designer gets when they see a piece of design that jars them,” Woowat said. “It’s not so much about subjective taste, but rather the ‘rulebook’ you get drilled into you when studying.”

Woowat conceived the kit in 2005 as a school project. In 2008 he redesigned it and posted it on www.design-police.org. More than 100,000 have downloaded the PDFs and the kit has been publicized in several design blogs. Woowat has received praise and angry messages criticizing him for stifling creativity and for having the audacity to name himself the “Design Police.”

The project’s intention was never to deputize himself, he said, but rather to educate and amuse. “...[T]he idea isn’t about highlighting bad design at all—or even correcting people. It was something that would simply make other designers smile,” Woowat said, adding that he’s never actually used the stickers himself. “Our aim is to draw attention to the sloppiness and corner cutting that creeps into design, when you think, ‘Why has that been left like that?’”

WHO CARES? So if type crimes (including typos) are so pervasive and the majority doesn’t pay attention, why do we care so much?

“As designers we are immensely passionate about our trade...So when we see type crimes it’s a huge sense of disappointment and frustration,” said Felton whose book emerged from his senior thesis showing many of the typography rules he learned in school. “It’s only right that we are concerned and more so than the average citizen. It’s our job to communicate correctly and if that isn’t being done then we should take note and do what we can to change it.”

“It’s all about consistent communication. The purpose of communication is to do it in a way everybody understands,” echoed Strizver. 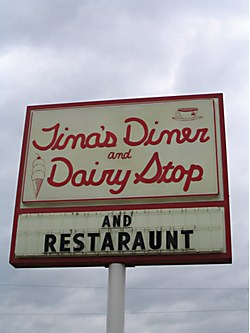 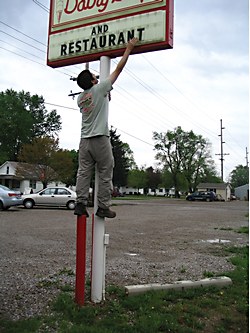 And part of consistent communication entails following certain rules, whether we like it or not, Strizver added. “It’s like using bad grammar, like using ‘ain’t’ or ‘youse guys.’ It sounds uneducated.”

Some argue misspellings or type crimes, despite defying rules and the dictionary, are still understood. Whether you’re using a dumb rather than a smart quote or a hyphen instead of an em-dash, the human brain interprets. Similarly when people notice the misspelling on the no tresspassing sign, they still keep out. Communication is happening despite the gaffe. And in some cases, like squishing type, the “crime” is just ugly, not wrong.

But the conundrum implicit in these “crimes” lies behind the actual meaning communicated. These crimes show a lack of care, respect and knowledge. The novice sign maker didn’t think to use spell check, have someone proof or pay an expert to help. So even though we get it, their message may come off as lazy or unimportant. Or in the worst-case scenario, it doesn’t communicate what’s intended at all.

Deck and TEAL say they care about getting it right. “We tried to go after things that were definitely wrong and could be fixed,” Deck said. “We felt we were helping people.”

A few times they were rewarded. At a New Orleans’s Margaritaville, they corrected an outdoor chalkboard. The proprietor recompensed them with a bumper sticker reading, “Time flies when you’re having Rum.” “It’s a little trophy I still have on the car,” Deck said.

LESSON LEARNEDThe sticker’s not the only thing Deck took from the experi­ence. In his first interview since serving his sentence, Deck told CA he’s now developed a firm policy. “No correcting signs without permission and stay away from government signs altogether.” He hopes to put the new guidelines into effect in 2010 when he plans to set out on a second trip to wipe out more mistakes, add to his writings and continue helping others. “The spirit is to work together with people,” Deck said.

Maybe I’m a little Pollyanna, but I like the sound of that. We in the creative fields are supposed to help people commu­nicate correctly. Perhaps part of the challenge isn’t just getting our messages out and selling stuff but stressing the importance of getting our messages right and selling that. We don’t have to embark upon a Kerouacian type tour. Or tackle offenders. Our efforts can be smaller. Teach a child about typography. Help a friend craft their business promotions. Check our own work. (Hey, we all make mistakes.) And maybe we just tackle the stuff that is “definitely wrong and can be fixed” in ways we feel appropriate, rather than heckling or ignoring blunders. That’s a good start.

And that’s why Deck plans on starting again. “It’s very easy to give up on something because it is hard and will take a long time,” he said. “But that doesn’t mean it’s not worth trying. Sometimes the effort is worth it.” ca 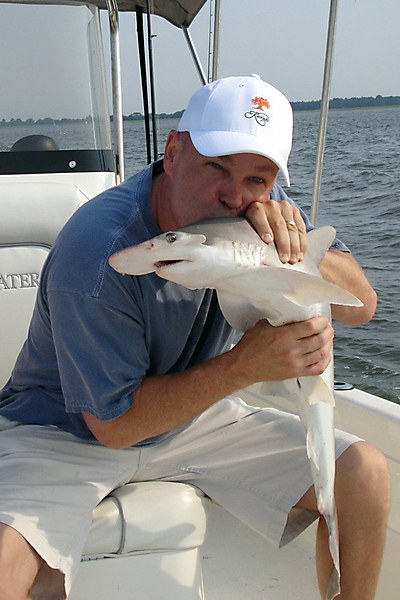 Columns / Insights
Stripping Away Bad Management, Distractions and Politics
Mike Grice comments on the awareness of children, the importance of understanding the business of marketing and why he'd like Krispy Kreme as a client. 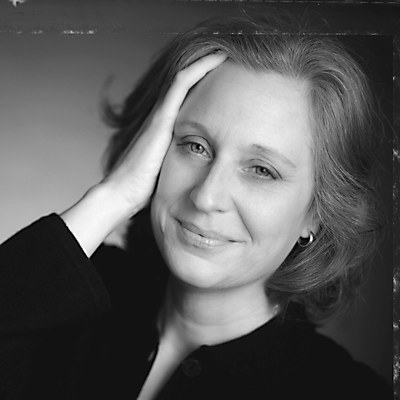 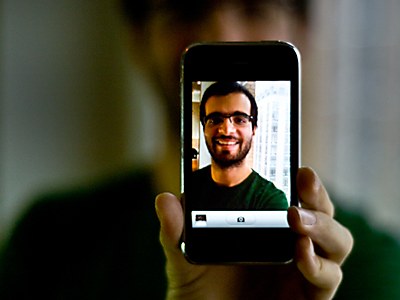