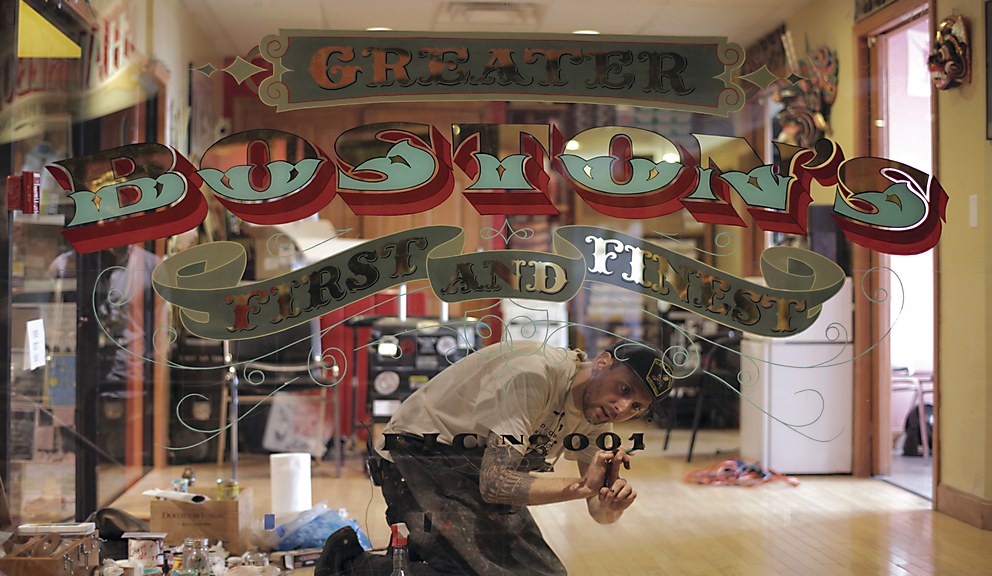 Signs of the Times

By Allan Haley
As folklore has it, in the nineteenth century, the owner of a railroad purchased a steam-powered hammer to do the work of his spike-driving crew. The mighty John Henry, to save himself and his fellow workers from being replaced by a machine, challenged the owner to a contest: Henry versus the steam hammer. The man beat the machine, but shortly thereafter, John Henry collapsed and died of exhaustion.

Some twenty-first century observers had predicted that sign painting would go the way of railroad spike-driving crews—that software, adhesive vinyl sheets and digital plotters would be the death knell to painting signs by hand. Indeed, up until recently, the future of hand-painted signs looked bleak. The old, and possibly final, generation of sign painters was retiring, or passing on. Vinyl sign shops were cropping up like dandelions in suburban lawns.

Within the last few years, however, this downward spiral has reversed direction, and a vibrant new community of sign painters is sprouting. They are young. They help each other learn the craft, and their work is driving a high demand for hand-painted signs. 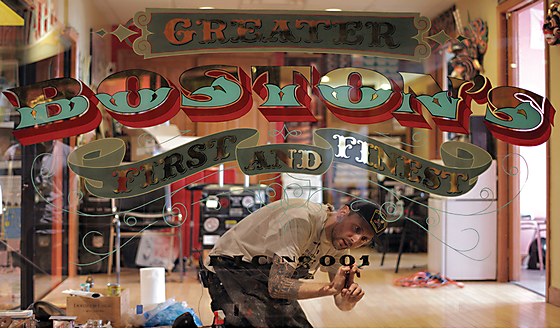 Best Dressed's John Luke applies gilding to this window sign, inspired by Boston-specific nineteenth-century paper currency, for Chameleon Tattoo and Body Art. Image courtesy of the Sign Painters documentary.
Why, after so many years of decline, are hand-painted signs making a comeback? Meredith Kasabian, business partner with Josh Luke at Best Dressed Signs of Boston, believes it’s a reaction to the proliferation of mass-produced products. “I think the last decade or so has seen a general movement toward more artisanal, handmade crafts,” she says. “There’s a trend toward a slower, more detailed process of making things. More and more businesses want to differentiate themselves from their neighbors by investing in some-thing that is handmade and unique to them.”

Damon Styer, proprietor of New Bohemia Signs in San Francisco, echoes Kasabian’s sentiment. “I believe that the more technology pervades every aspect of our lives, the more we feel a hunger for some semblance of human touch, some echo of our own softness—our own fallibility.”

There are apparently many people, at least in the San Francisco area, who agree. While Styer is not sure exactly how many signs New Bohemia is responsible for, the shop completes nearly 550 projects each year, and there’s nary a retail block in the city that doesn’t feature its artistry.

This new group of sign painters genuinely love what they do, and share the optimism for their craft. “I clearly think the future of sign painting is positive and would recommend a career in sign painting to a young person,” says Kasabian. “That person, however, would have to be a very special kind of individual, specifically, the kind who believes that living your dream is totally worth the sacrifices it takes to get there. It’s a long road to proficiency, and sign painting has never been about getting rich.”

The tradition of apprenticeship and mentoring among sign painters runs deep, and this new, young group seems to be perpetuating it naturally. New Bohemia’s Styer runs Saturday and Sunday classes on brush lettering. “My classes are pretty small potatoes, in comparison to regular schools, but a couple of my ‘graduates’ have already hung out their own sign-painting shingles.” Some of his students go on to work in Styer’s shop. He acknowledges, “Ideally, I’d like an apprentice to come to the shop every day to practice, but I know that’s impractical. Usually they will show up about twice a week.”

Styer adds, “After time, if they show ambition and proficiency with a brush, I’ll offer them a job as part of our staff. That doesn’t happen too often though. Most of my students are graphic design pros who are looking to add another arrow to their design quiver, or to find a different creative use for their hands.” On busy days, Styer will share his small shop with up to three additional sign painters. Much of the time, however, he works alone.

Josh Luke began his career in hand-painting letters as an apprentice to Styer, and eventually became an employee at New Bohemia. “Damon was my mentor,” reports Luke, who moved across the country with Kasabian to set up Best Dressed Signs in Boston three years ago. “Only recently have I considered myself a full-fledged sign painter.”

While Luke works in a variety of media, he says that gold leafing is the most challenging. “Working with the various techniques of gold leaf on glass with hand and brush is the most difficult. Not only are you working with a transparent surface that is extremely delicate, the gold leaf is also delicate and because of the reflective quality of both the glass and gold, your mind can play tricks on you while trying to execute an often detailed and intricate design.”

While it’s demanding, Luke takes pride in working in a particular style of gold leaf lettering. “It’s called the ‘Boston Style,’” says Luke. “It’s a gilding technique that features matte gold centers, burnished (or mirrored) outlines and a black outer outline with no shadows. The style is historically prevalent in Boston and … was the preferred style of the sign painting schools in the area.” 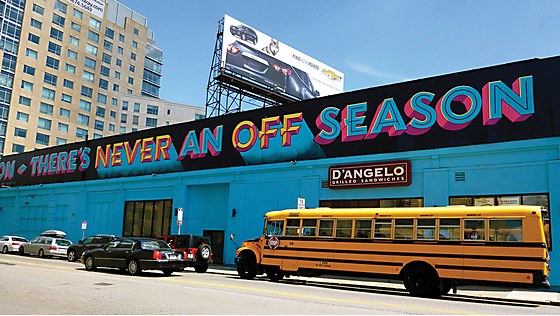 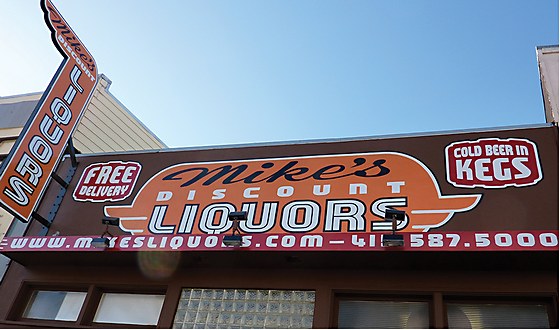 (Top) In hopes of rejuvenating Boston's Fenway neighborhood, a real estate developer had Best Dressed "dress up" one of the area's largest "canvases"—a commercial building slated for eventual demolition. (Bottom) Mike's Liquors needed to repaint their storefront, and wanted to upgrade their signage at the same time. Inspired by the dozens of mid-century neon signs (now in various states of disrepair) that mark corner stores all over San Francisco, New Bohemia designed and painted both the wall and the projecting sign (on DiBond panels), which Mike later adopted as the new logo for all of the store's collateral.
Best Dressed’s largest—and most daunting—project to date, however, is not one that involves gold leafing but the “There’s Never An Off Season” sign in Boston’s Fenway neighborhood. “We got the job through Korn Design,” Kasabian says. “Korn was developing a campaign for a real estate developer, to rejuvenate the neighbor--hood, and they called us.” The result is a sign that wraps around the side of a building, with letters that are over six feet tall. The total installation extends 300 feet.

“It was a huge project in several ways,” says Luke. “It started with two small pencil sketches we submitted to Korn. One of the type-styles was an art deco design that I liked because it complemented the buildings in the area. The other was more of a simple gothic style inspired by a sample in an old Speedball lettering book. Korn chose the latter, and I was able to give the design a little art deco flourish.”

Most sign painting projects begin with full-size letters drawn on butcher paper, which are then outlined with a punch wheel to create perforations. The paper drawings are then taped to the installation and chalk is pounced through the perforations to transfer the letter shapes to the surface to be painted. This was the process for the “There’s Never An Off Season” sign. Well, sort of.

For a new gift shop in a refurbished terminal at the San Francisco airport, New Bohemia's Damon Styer employed a variety of letter styles to describe the city's iconic neighborhoods.
“We drew the letters,” explains Luke, “and we digitized them. Then we sent the digital files to New Bohemia because Damon has a digital plotter that he’s converted for making perforated patterns [a unique device that allows NBS to service other sign painters, mostly in San Francisco]. He took our files and gave us back 300 feet of punched paper—except that the letters, because they were so big, were cut in half. We put them back together on the side of the building.”

The month-long project was not without its challenges. “We started working on the first of April,” Luke recalls, “but had to stop for several days because the Marathon bombing was just down the street. Boston businesses basically shut down for that week.” Another, far less serious incident also delayed the project’s progress. Luke tells the story, “My apprentice and I decided that we would transfer the lettering from the paper patterns to the side of the building in one effort. It took us three days to do one side. And then it rained.” About half of the work was washed away, and Luke decided to do the next side of the building a few letters at a time.

While Best Dressed’s biggest gig to date took 30 days start-to-finish, New Bohemia has been continuously working with one client for over eight years. “This guy just came into my shop one day,” recalls Styer. “He needed a sign for his storefront. He was pretty easy to work with and one thing just led to another.”

The “guy” was John Garrone, the owner of Far West Fungi, a unique shop in San Francisco’s Ferry Building, specializing in cultivated and wild mushrooms, fresh seasonal truffles and unusual forest products. He had been selling his wares at local farmer’s markets, but was now opening his own store and needed a sign. The sign became the company logo and foundation for its branding. 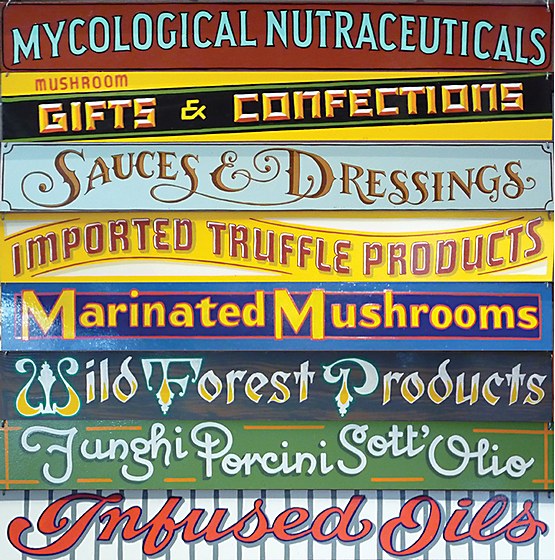 In-store shelf signs for a foodie shop in San Francisco's Ferry Building are part of New Bohemia's ongoing identity project for Far West Fungi.
“Now they’re addicted to hand-painted signs,” says Styer with a laugh. “I do several a year for them—mostly shelf signs. They will add a new product to their offering, and then stop by my shop for a new sign.” Styer says, “It’s a great gig. I provided a few pencil sketches for the store logo, and there was a little ‘back and forth’ on some of the details. But from then on, they’ve just asked for a sign and left the rest up to me.”

This artistic freedom allows Styer to spend time with his growing assortment of lettering resources—everything from old sign painting manuals and type-face specimen books to a collection of California orange crate labels. His reference library also includes hundreds of photos and sketches Styer has made to capture lettering styles he sees in use. “For Far West Fungi, I get to pick whatever type of lettering style I want,” says Styer. “It’s a carte blanche project, which makes it terrifically fun.”

Young sign painters like Luke and Styer see their craft as a multi-faceted art that encompasses much more than just painting with a brush. Gold leafing, glue-chipped glass, marbleizing and various other techniques add richness to the craft. While some signs may take a hundred or more hours to complete, and some projects can last for years, these sign painters see nothing precious about the end results. There is an irreverent sign painter’s motto that says it all: I.O.A.F.S. (It’s Only A Fucking Sign).

It may only be a hand-painted sign—but as their numbers grow, the landscape becomes a bit less industrial and a bit more humane. ca 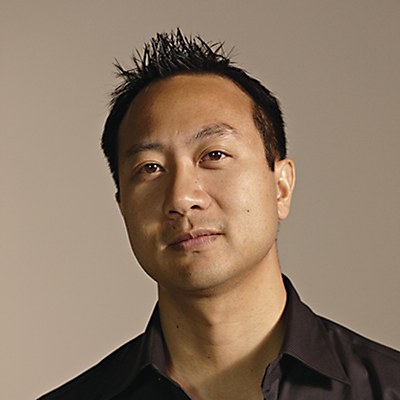 Columns / Insights
One Hour at a Time
David Lai, CEO and creative director of digital creative agency Hello Design, thinks about what brands could do to engage us while we’re waiting for a latte. 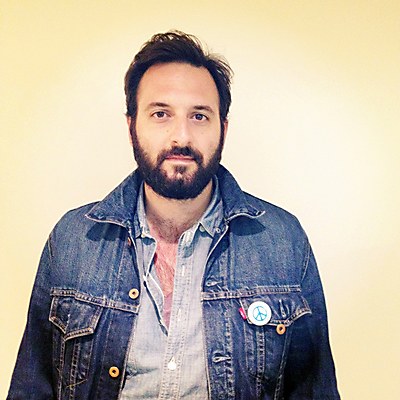