So... How Do Virtual Creative Agencies Work?

For an industry built around forward-thinking ideas and a universe of inventive minds, you’d think someone would’ve reimagined the traditional creative firm long ago. Sure, offices have gotten facelifts, spaces are more open and cubicle walls have been lowered. But for the most part, brick-and-mortar design and advertising workplaces have barely evolved. Of course, if it ain’t broke… you know the drill. But something’s obviously not jiving. There’s a growing unrest among experienced creatives disillusioned with conventional agency methods, so much so that the desire to create meaningful work in more cost-efficient, flexible and personally satisfying environments is pushing talented folks to think outside the walls—literally.

The results: creative collectives, networked models, distributed teams—however you label them, virtual creative agencies are popping up in coffee shops, co-working spaces and homes across the country. And while the notion isn’t entirely new, ditching the cool studio space in exchange for a business run from wherever there’s Wi-Fi, with an entirely remote employee and client base, is becoming a heck of a lot more viable thanks to ever-emerging technologies. 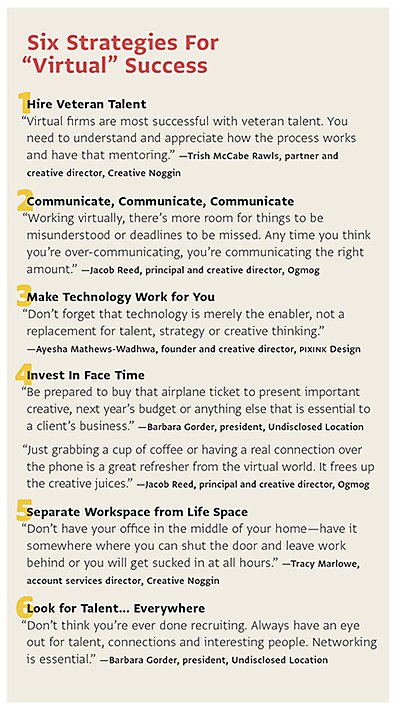 But how exactly does the business-sans-building model work? For answers, we tapped on the (non-existent) doors of the country’s leading virtual creative agencies for tips on making this unlikely venture succeed.

BUILD A TRIBE OF TALENTWhen Texas-based partners Trish McCabe Rawls, creative director, and Tracy Marlowe, account services director, launched their virtual marketing and advertising agency Creative Noggin in 2008, they built their team with a laser focus on seasoned creatives. “A lot of the veteran talent is freelance—they hit a ceiling at agencies and move on,” says Marlowe. “So what we did, and still do, is utilize all this experience by building specialized teams for our clients’ exact needs. Not only do our clients get access to incredible talent, we can ebb and flow with our business. One month, we might work with 10 contractors, another month 25.” Creative Noggin now consists of 5 full-time staff and 40 freelancers nationwide.

“That’s one of the big strengths of the virtual agency—talent comes on board for specific jobs, as opposed to traditional agencies, where the staff might not have the experience, but you have to use them anyway,” says Los Angeles-based Jacob Reed, principal and creative director of Ogmog, a virtual design firm that works with clients like NBC, Ask.com and Funny or Die. “I’ve found I get the best work from creatives when they can choose the projects that excite them, which in turn produces great results for our clients. But if someone can’t self-manage, they’re just a weak link.”

Also critical to success is having an extensive talent list that you can tap at a moment’s notice, notes Barbara Gorder, president of virtual advertising agency Undisclosed Location. Her global collective is comprised of friends and colleagues she met at established shops like Leo Burnett, where she previously headed creative as senior vice president. “You need to be connected to talent everywhere to solve your clients’ problems,” she says.

ARM YOURSELF WITH TECHNOLOGYWhile it’s no surprise that virtual agencies are digitally dependent, it’s still impressive that a robust creative firm can be run entirely online. From file-backup systems to storage, project flow, communication, billing, time tracking and beyond, “We would be lost without many of the web-based programs out there,” admits Reed of Ogmog. “Important information can be miscommunicated, so having a project management system like Basecamp and using tools like Google Apps that let everyone share and collaborate on projects is essential.” He adds, “Because of this set-up, we actually have more open-flow communication than traditional agencies.”

Marlowe of Creative Noggin concurs. “We have all the good processes you’d find in a conventional agency, but without all the hierarchical layers,” she says. “When I worked at other firms, scheduling a meeting with the creative director was much more of an obstacle than just hopping on Skype to ask a question. Everything is much quicker because it’s all online. I’ll post a client edit on Basecamp and an e-mail immediately goes out to our team, so everybody’s always in the know.”

Partner McCabe Rawls, who regularly uses Egnyte, a cloud-based file storage system, adds, “If somebody’s on vacation or goes to a doctor’s appointment and a client needs a change ASAP, we’ve always got access to the latest files and can jump on revisions—even faster than a traditional agency.”

Whenever possible, Creative Noggin will nix the screen for in-person meet-ups. “We’ll get together with the writer or art director and collaborate at a coffee shop or one of our homes. And if that’s not doable, we’ll brainstorm using the phone, Skype or screen sharing, which feels just like I’m in the office looking over my co-worker’s shoulder,” says McCabe Rawls. “Virtual collaboration isn’t a hurdle for us.”

The same philosophy holds true for client interactions, whether fostering new connections or presenting important creative. “We prefer to get as much face time as possible when we first work with clients, to develop the relationship, but it’s not needed so much after that level of trust is established,” says Mike Zitt, a long-time partner and creative director with Undisclosed Location.

So how are virtual presentations handled? No office dress-up, no pony shows—just creative sent to the client, followed by a conference call. “It forces us to let the work speak for itself,” says Reed.

A COMPETITIVE EDGE?Sure, some old-schoolers might still be hesitant to forgo the brick-and-mortar model, but Creative Noggin has found their set-up to be an asset and uses it as a selling point. “Clients want to know they’re making a smart spend with marketing dollars,” says Marlowe. “We explain that our overhead is lower so we can charge lower costs for senior talent. For them, that is a smart choice. They get it.”

Gorder of Undisclosed Location suggests that the appeal goes even further. “There’s no obstacle or water cooler conversation that gets in the way of work. And clients have direct access to anyone, whether they’re in the creative, media or project management departments.”  She adds, “Why wouldn’t you want to work with a talented team dedicated to your business that pulls in experts and lets you pay as you go?”

Virtual and traditional differences aside, these forward-thinking agencies will also be the first to concede that you can’t measure success in square footage, or lack of it. Office or not, it’s all about delivering great creative and great service. Period. ca 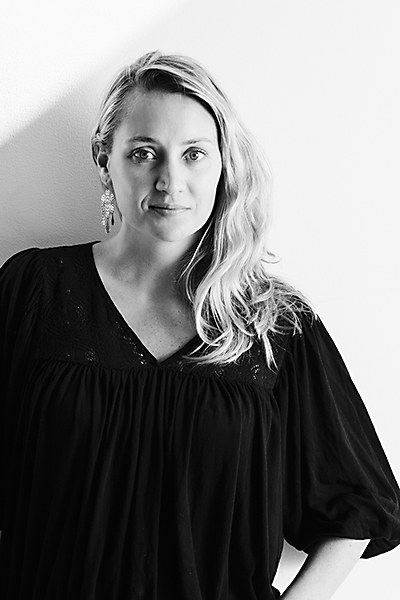 Columns / Advertising
How American Idol Can Help You Land The Perfect Job
Ernie Schenck on how to reach advertising’s heartland. 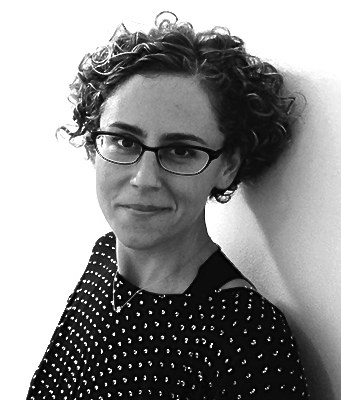