The Language of Design

By Nick Asbury
You’ve been described as “the designer’s writer.” How do you view your own identity and work as a copywriter? That was a flattering quote—other writers are definitely available. I usually describe myself as a writer for branding and design. My main job is working as a freelance writer for design companies and direct clients. I’d say I’m good at two main things. The first is articulating strategy in a concise, interesting way. I work on a lot of branding projects where there’s a broad sense of what needs to be said, but I help with the process of stripping it down and making it come alive. The second is working on ideas-based writing that involves some craft, wit and lateral thinking. I recently worked with Google on a project called Sideways Dictionary, which explains technology using analogies. I really enjoyed the lateral thinking involved in that project.

You and your wife, designer Sue Asbury, run Asbury & Asbury. How do you mesh your own writing process with Sue’s design process so your projects are stronger for it? Nearly all my working life has involved collaborating with designers, whether it’s Sue or any of the design companies I work with. I feel like writing and design are joined at the root—even the word graphic comes from a Greek word meaning both writing and design. You can think of writing as designing information, and you can think of design as writing with images. They’re all part of one act of communication.

Wit is something that drives the personal work we do at Asbury & Asbury. A lot of our projects have what you’d call a witty twist. Perpetual Disappointments Diary is an appointments diary with disappointing twists. A6 Notebook is an A6-sized notebook about the A6 road in England. Pentone is a play on Pantone, using words instead of colors.

With some projects, you get a conscious sense that either the writing or the design has to play the supporting role, and you can’t let ego get in the way. It’s almost like tennis doubles, where one partner runs to the net, and the other instinctively drops back to cover the rest of the court. So if I’m working on a design project where the visuals are the “hero” of the piece, then it makes sense to keep the writing straight rather than trying to compete. And vice versa with other projects; for example, Pentone was such a words-based idea that Sue made the design a deliberately neutral stage for the words.

Increasingly, brands will also need decent writers to script their user interface—if things like Alexa embed themselves in our homes, we’ll be interacting with brands more and more using words, and less and less with images.”

Is Pentone in any way a response to the way you see tone being utilized by brands today? I first had the idea in 2006, when the idea of “tone of voice” was starting to emerge in writing for design. Around that time, there was a deliberate movement to repackage the way copywriting was sold to clients. By calling it “tone of voice” or “verbal identity,” it was easier to sell it in as part of the branding process, rather than just a tactical or executional thing.

On one level, that repackaging has been a great success—nearly every brand now includes something about tone of voice as part of its brand guidelines. But it was also clear from the start that this was a slightly forced way of looking at writing. It’s not really possible to break down and systematize language in the same way you can with, for example, a color palette.

Pentone was a humorous exploration of that whole area. I wrote sample “swatches” for different tones of voice—angry, wacky, boring, happy, sad and so on. It’s a playful project, but it has some practical use in brainstorms and workshops. We produced a box set of 30 swatches, and they’ve proved quite popular. Taking our cue from Pantone, we’ve also done some mugs.

How has the proliferation of the Internet and social media impacted branded copy? The arrival of Twitter was a big moment for copywriters. The way the industry worked back then, many of us were either solo freelancers or might be the one writer working in a big company. So there wasn’t a lot of interaction. But through Twitter, a sense of community formed. And it’s a medium that suits copywriters, who are used to condensing information down.

More broadly, there’s a lot of negativity about the Internet dumbing things down and creating an illiterate culture with zero attention span. I think it’s the opposite—people are absorbing and sharing more words than ever, just in different ways. We tweet, blog, search, skim and disappear down rabbit holes. For brands, there are few things more powerful than having a decent writer running your social media accounts. Increasingly, brands will also need decent writers to script their user interface (UI)—if things like Alexa embed themselves in our homes, we’ll be interacting with brands more and more using words, and less and less with images.

Last year, you updated the graphic design book A Smile in the Mind: Witty Thinking in Graphic Design with Greg Quinton. What did the experience teach you about how to utilize wit in your own writing? I’ve always seen wit and ideas as central to what writers and designers do. In part, that’s because the original edition of A Smile in the Mind came out in 1996, just as I was starting out. I remember looking through it and feeling like this was a bridge between writing and design—a common language of ideas.

On the downside, the original edition became associated with a certain narrowly defined view of wit, which was all about trying to get some sort of visual or verbal pun into every project—even though the book itself argued against that. With the update, we consciously tried to broaden out the definition of wit. It’s not necessarily about humor—it’s a pattern of thinking that involves a search for cross-connections and productive associations. It can be a structural idea that shapes the way a brand works, or it could be an idea for a new product or service.

This whole realm of “ideas” still comes as a revelation to many people, especially when they’re starting out—this notion that design and writing can be energized by a thought that propels everything else. If you look at a lot of the best copywriting over the years, it’s usually driven not by some preconceived notion of tone, but by an idea that shapes the tone and makes it inevitable.

What’s one piece of branded writing—either historical or recent—that you wish you’d written? I wrote recently about the New York Times’ truth campaign that came out in response to the Trump attacks. I’m wary of criticizing someone else’s work openly, but given that it’s a public interest project, it feels fair enough to speak up. Without going into the whole argument, I felt the campaign didn’t work on a persuasion level. It played into negative perceptions about the Times being elitist and somewhat moralistic, and implicitly accepted the terms of Trump’s argument, instead of using the opportunity to reset the conversation.

Given the times we’re living in, I’m really interested in projects that harness the persuasive powers of copywriting and branding, but use them to change minds instead of selling products. 2016 felt like a grim year for anyone in the persuasion business; somehow, the best minds of branding and advertising weren’t able to cut through the juggernaut of bullshit that came in the shape of Trump. It feels like people are still trying to find the best way to do it.

You’ve said that you’re a great fan of poems—and a poet yourself! How has your passion for poetry helped you as a copywriter? I’m aware it sounds pretentious to compare writing copy to writing poems, but after a while it’s hard not to see the parallels. They’re both a highly concentrated form of writing, where you’re condensing meaning into a short space and drawing on a similar bag of verbal tricks: rhyme, alliteration, wordplay.

I studied English at university, so I read plenty of poetry, but then drifted away from it in my twenties. But later on, I found myself getting into it again, and a kind of cross-connection took place. I was reading about cut-up poetry, which rearranges words from existing sources, and wondered whether I could do that with business writing. That led to me to write a little book called Corpoetics, which took the words from various company mission statements and rearranged them into poems. It was a way of joining my two worlds together.

As technology continues diversifying—conversational chat bots are one example—what challenges will the next generation of copywriters face? There should be lots of great opportunities. People often talk about new technologies displacing old ones, but usually they end up coexisting happily. The rise of digital has led to a revival in old media like vinyl and beautifully printed books. In the same way, the rise of spoken UI might lead to people appreciating the written word more. But both areas will need writers, and there will be lots of new tools to play with. I feel like in every era of copywriting there are opportunities for mischief and subversion—artificial intelligence just creates a whole load more, like a fresh fall of snow.

What clichés should designers avoid when writing the About pages of their websites? They’re one of the hardest things to write. I find it almost impossible to work on them unless it’s a company I’ve worked with and feel like I know well.

If you’re an established company, you can stick to facts and achievements—let those tell the story. But if you’re relatively new, it’s trickier. Saying nothing is better than repeating the clichés. My advice would be to use it as a creative opportunity in itself. Maybe get your granddad or niece to write it. Write it in emojis. Show you’re different instead of saying it.

Nick Asbury is a writer for branding and design, and one half of United Kingdom–based creative partnership Asbury & Asbury. He works as a freelance writer for design companies including Johnson Banks, NB Studio and The Partners, and for direct clients including Jigsaw, a division of Alphabet Inc. As part of Asbury & Asbury, he works on self-initiated projects including the Perpetual Disappointments Diary, a diary and planner with a series of disappointing twists, which has recently been published by Chronicle Books in the United States and Pan Macmillan in the United Kingdom. Asbury writes for Creative Review magazine, and his writing has appeared in places ranging from McSweeney’s Internet Tendency to the Guardian. 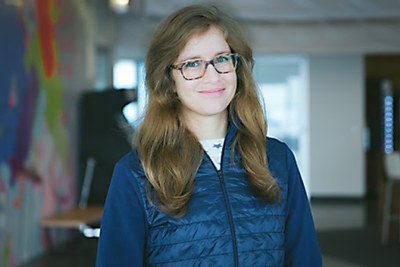 Columns / Design Culture
The Interview Tool
Wendy Richmond details a method to overcome your inability to describe your work. 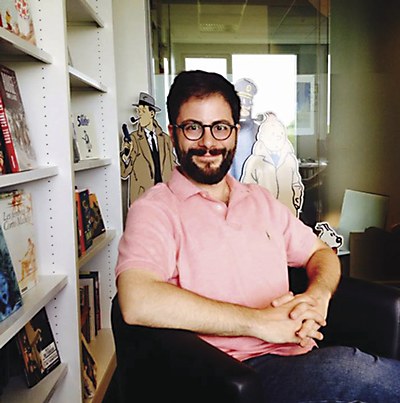