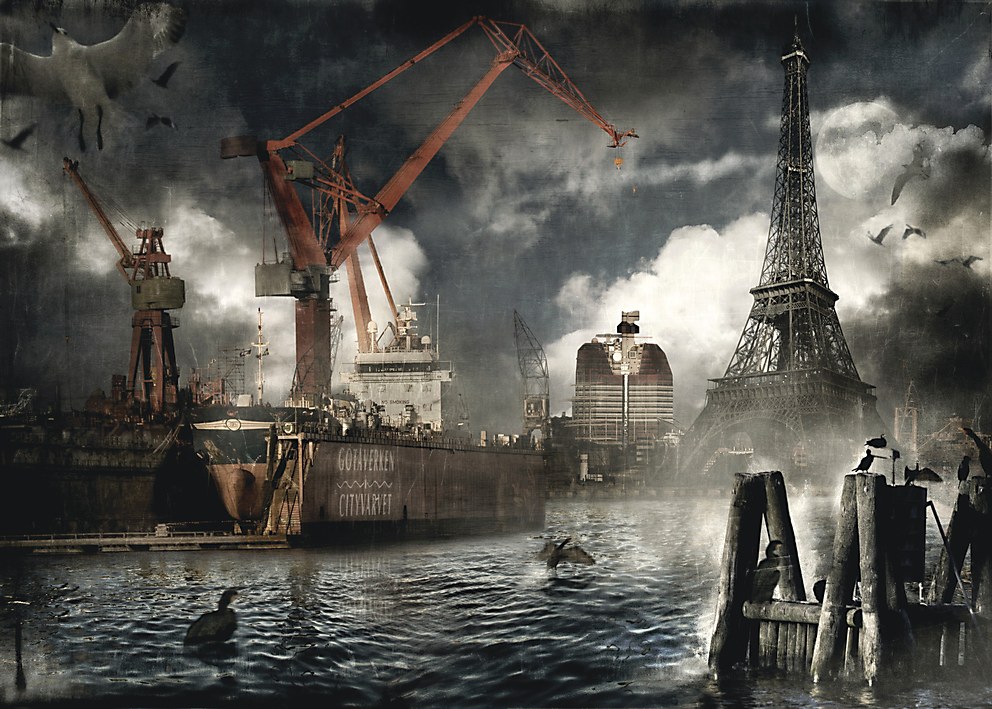 Sara Breselor meets Cooper & Gorfer, an inseparable artistic duo at the intersection of photography and painting.

By Sara Breselor
In the e-mails I’ve received from the Gothenburg, Sweden–based photography duo Cooper & Gorfer, there has never been a single word that I could distinctly ascribe to either Sarah Cooper or Nina Gorfer. Their messages speak of “we,” “us” and “our” and are always signed with both their names. This is also true of their press releases, artist statements and forewords to their books: the words of Cooper & Gorfer come from a single voice. To call them “partners” inadequately captures the fusion that their definition of collaboration entails. “You stop creating as and for yourself and completely immerse yourself in a symbiosis,” they say. “From the very beginning we shared the ownership of anything that we produced.”

Cooper and Gorfer take on a wide range of commercial and editorial work, but they are careful to choose projects that align with their artistic vision and maintain their integrity as fine artists. “We can really enjoy commercial jobs after long periods of being immersed in our own art,” they say. “It can be rewarding, with new inputs and challenges, getting us out of our comfort zone.” The projects shown here (from left) were created for Vision Magazine, Göteborgs Posten, and The Gothenburg Opera.
This symbiosis occurred despite the fact that Sarah Cooper and Nina Gorfer shared neither skill sets nor work experience, neither cultural background nor native tongue when they met in 2005 as graduate students at HDK, the school of design and crafts at the University of Gothenburg. Cooper is an American with a BA in photography from Syracuse University, and Gorfer, who is Austrian, had worked primarily as a graphic designer and art director, though she studied architecture at the University of Applied Arts in Vienna. What brought them together were common interests that seem more literary than artistic: a fascination with narrative structure, a love of books, and a curiosity about the influence and expression of culture in the stories people tell. They are joined by a desire to find new ways for a visual image to express a complex narrative, and by their willingness to ignore any and all boundaries in their exploration of the photograph as a means of communication.

They have traveled to Qatar, Kyrgyzstan, Argentina, Iceland, Greenland and the Faroe Islands, seeking out little-known cultures and complex histories. When they meet the people they plan to photograph, the first thing Cooper and Gorfer do is ask them to tell a story. That tale becomes a narrative map for a photo shoot, carefully staged to represent some aspect of what they’ve been told. They shoot with a Hasselblad H4D medium-format digital camera and portable flash system lights. All of this, however, is just the beginning.

“A photograph shows us the outside, rather than the inside. It shows us what we can see with our eyes, not necessarily what we can perceive in a moment or about a person,” say Cooper and Gorfer. A photograph in and of itself might be a paltry record of what someone has expressed to them. It might fail to capture what moved or fascinated the artists at the moment the shutter snapped. “Even if you stage your photograph and meticulously design all the details, you are still bound to the rules of our physical world,” they say. “But this is not how perception, intuition, memory or emotions work.”

Based on a definition of truth that is at odds with what is commonly understood as “photographic accuracy,” Cooper and Gorfer’s images are true to the invisible and intangible forces at play during their interaction with their subjects. “We extend, supplement, deconstruct and layer our images to portray something we cannot see,” they say. “We work more like painters.” This process can be completely digital or it can involve drawing, painting, scratching or sewing onto a physical print, which is then digitally collaged back into a composite image. The construction process can take weeks as they search for an authenticity that is elided by visual fidelity to the real. 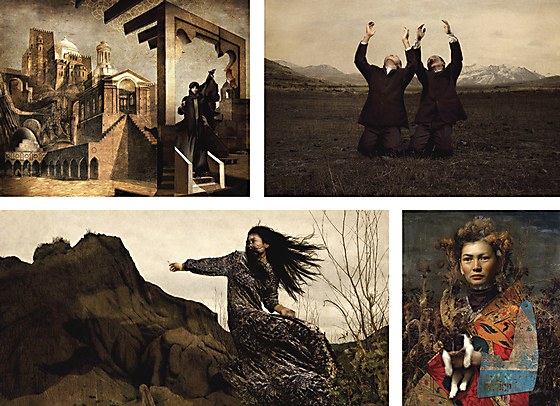 In their personal work, Cooper and Gorfer take an anthropological approach, traveling to foreign places and creating images that communicate the cultural and historical influences that shape their subjects’ lives. Rasha and the City (top left) is from the series Latent Now (2009), shot in Qatar. Brothers and Arms, Shola and the Cat and Ajar and the Wolves (clockwise from top right) are from the series My Quiet of Gold (2011), taken during a trip to Kyrgyzstan.
By way of example, Cooper and Gorfer point to Shola and the Cat, a heavily manipulated image from a series they shot in Kyrgyzstan, collected in their 2011 book My Quiet of Gold. In the portrait, Shola’s left arm has been replaced by a graphic patterned sleeve, rigid and flat as cardboard and pinned to her shoulder like the limb of a paper doll. The right side of her body has vanished entirely, leaving nothing below her collar but a backdrop of dry thistle. Her face, in contrast, is in full, clear detail.

The story that Shola told Cooper and Gorfer was of her own kidnapping. She was abducted by a man who held her captive until she orchestrated her escape. “There is a truth to Shola that you would not see in the 30th of a second that is captured by the photograph,” Cooper and Gorfer say, and their alteration of the original image creates what they call “metaphorical cues” to suggest violence, sensitivity, pain, loss and triumph. The effect is perhaps less visual storytelling than it is visual poetry, rich in symbol and metaphor, but ultimately open to interpretation. Cooper and Gorfer believe that it is crucial to engage viewers by asking them to fill in gaps. “A good image is as much about the one looking at the image as it is about the one portrayed,” they say. “There must be a connection.”

Cooper and Gorfer have been criticized for the digitally mediated aspect of their photography by those who argue that it detracts from the works’ artistic value and meaning. But they don’t believe that an image as captured by the camera has any more inherent artistic relevance than one that has been digitally altered. “Technology is a tool only, a catalyst in the best of cases, but it is not the artwork itself,” they say. Furthermore, they argue, hewing to the classical definitions, and limitations, of photography runs counter to the nature of the medium. “Photography will always be synonymous with technology; it has been machine-dependent since its creation,” they say. “As artists, we think it is more interesting to contribute to pushing innovation within the technology prevalent today than to work within the traditional conventions of the field.”

In 2012, Cooper and Gorfer were asked to curate the 2014 Nordic Fashion Biennale, featuring the work of designers from Greenland, Iceland and the Faroe Islands. The images were manipulated to symbolically and metaphorically reflect the designers’ creative and geographic isolation and the extreme climatic conditions of the region, where there are seasonal periods of 24-hour daylight and darkness. An exhibition of both the clothing and the images is currently at the Museum Angewandte Kunst in Frankfurt, Germany, and will move on to the National Museum of Photography, Black Diamond, in Copenhagen, Denmark. The series, collected in a book recently published by Gestalten, is titled The Weather Diaries. Shown here (left to right) are Sára, Armgaro and Alda on a Hill, The Carried Girl and Ena Holds the Sea.
It’s somewhat unusual for artists with Cooper and Gorfer’s focus on highly conceptual fine art to maintain a comparably robust editorial and commercial portfolio as well and, as they admit, “These two worlds don’t always acknowledge one another with praise.” They see the ability to work productively in both spheres as a question of self-knowledge. “Intention plays a big part,” they say. They are clear about what they want to create, and they ensure that that alone is what dictates the aesthetics of the work. Thanks to that clarity of purpose, their images for publications such as Plaza, Vision Magazine and 2 Dagar and for clients such as Philips and Velour clothing are an evident continuation of the narrative and aesthetic themes they pursue in self-directed projects.

In all their work, Cooper and Gorfer inhabit what they call “a gray zone between photography and painting” that forces their audience to abandon the certainty of knowing exactly what medium they’re looking at. This causes a certain amount of cognitive discomfort. We want to know what is photograph and what is painting, what is “real” and what has been digitally altered. But Cooper and Gorfer’s refusal to accommodate normal categorization is what opens new categories; their resistance to established definitions is what enables them to redefine photography’s potential. By the same token, their insistence on speaking in a single voice is a frustration of logical possibility—one or the other must be writing the e-mail—but it explains without exposition the unusual truth of their partner-ship, at once both and neither of their individual selves. ca 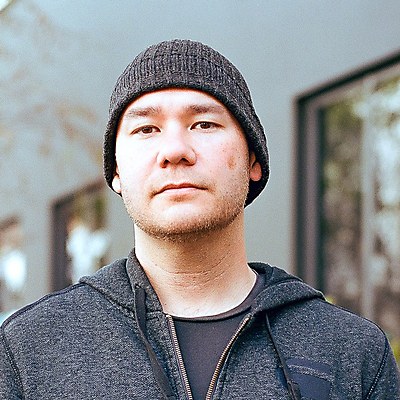 Columns / Insights
Get That Bento-Box Lifestyle
Design manager for the brand team at Pinterest, Brian Singer, tells us how to stay energized with side projects. 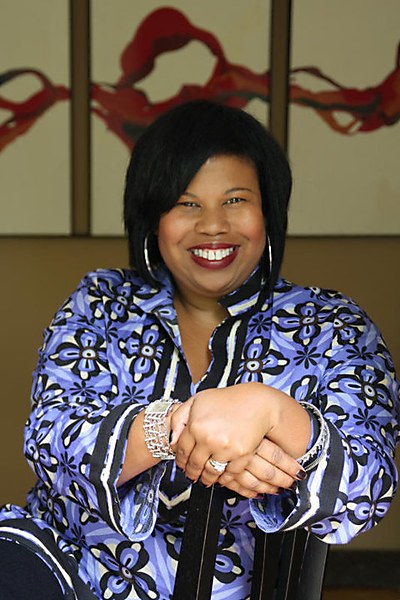 Columns / Insights
How to Get Noticed
Jennifer Ransaw Smith, CEO of Brand id|Strategic Partners, explains why you need to build your personal brand. 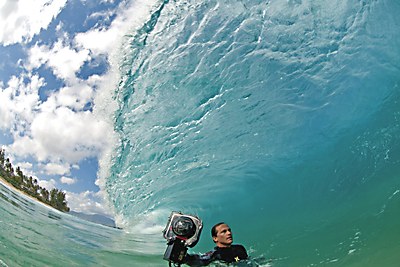