What's In a Word?

Sam McMillan explores how the Lexicon of Sustainability defines the movement through storytelling.

By Sam McMillan
Douglas Gayeton is out to change the way people talk about food. For starters. His Lexicon of Sustainability is a multi-pronged attack on the way agribusiness markets its products to America. Combining a website, a series of films shown on PBS and a pop-up photography show touring the country, The Lexicon of Sustainability seeks to define the terms that define the movement. It is the result of Gayeton’s three-year trek across America, documenting the work of 150 visionaries, activists, gardeners, cooks, farmers and foragers who have helped transform sustainability from a buzzword to reality.

Photographer, filmmaker, author of Slow: Life in a Tuscan Town, Gayeton works out of an old foundry on a “disinhabited” chicken farm in Petaluma, California, a former agricultural center once known as the Egg Capital of the World. So it’s fitting that one of the movies Gayeton made tells the story of an egg. And not just any egg. A “cage-free” egg. Two simple words; so much at stake. Because eating, that most personal act, is also a profoundly political one. 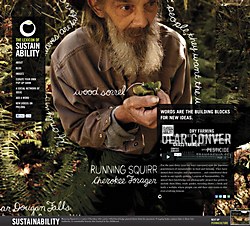 No project exploring the most critical words and terms that define sustainability would be complete without tackling the meaning of “sustainability” itself, which is defined on the Lexicon of Sustainability’s website by Running Squirrel, a Cherokee Indian forager.

Turns out “cage-free” just means a bigger cage. According to the film Gayeton made, cage-free hens are still being raised in huge pens, unable to turn around, standing in an inch of their own excrement. For Gayeton, the perversion of language was a call to arms. “Whether we know it or not, we are at war with advertisers and industrial food companies who have hijacked the terms representing the solutions to most of our problems,” Gayeton says. “After spending 25 years in the media business, I decided to use the persuasive storytelling techniques I’d learned, as a force for good.”

Funded by the Independent News Service and the Corporation for Public Broadcasting, Gayeton’s films are six-minute explorations of the concepts captured by the Lexicon photos. Gayeton, wrote, directed, shot and animated the films (he was a former creative director at an animation studio in Paris), created the music and narrated the voiceover. When it comes to the “one-man-band” approach, Gayeton says proudly, “Conosco i miei polli.” It’s an Italian phrase that means, “I know my chickens.” That motto is “the guiding principle of my life,” he says, and means, in essence, “if you know the source of production, you can trust the results.” In other words, after three years of working closely with the leading thinkers on sustainability in food and farming, Gayeton has learned how to translate their goals and challenges into something that the average person can relate to.

WHAT WE TALK ABOUT WHEN WE TALK ABOUT SUSTAINABILITY“How can we talk about sustainability if we don’t even know the most basic words that define the conversation?” Gayeton asks. The Lexicon of Sustainability is an attempt to explain the terms of the debate, create a shared language and then simultaneously spread a truly subversive message: The way we eat is actually within our control. 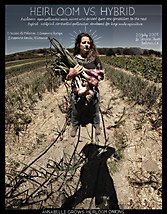 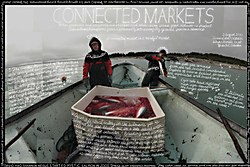 By allowing his subjects to explain their passions in their own words, then placing these ideas within carefully constructed narrative scenes, Gayeton’s editorial strategy cajoles readers to seek out every morsel of information contained within an image.
“We have to wrestle back the terms that have been hijacked,” Gyeton explains. “Nothing is more revolutionary that arming people with information.”

And that’s exactly what Gayeton does in the photographs he shoots and turns into what he calls “information bombs.” Equipped with a still camera, Gayeton will take hundreds, if not thousands of images in his attempt to tell a story. Then he assembles the images in a single composite. Gayeton writes over the image, transcribing the words of his subjects to tell their story. Typically, Gayeton will frame his subject front and center, then surround them, and the artifacts he pictures with explanatory text, driving what normally might appear in a caption directly onto the photograph itself. The result is a densely layered photo that compresses a documentary film into a single 2-D image.

For inspiration, Gayeton points to Caravaggio, whom he says was one of the first painters to preassemble a painting to make a moment that never existed. “Because each artwork is comprised of dozens if not hundreds of images, I can actually compose different narratives within the same artwork, at times building scenes over hours and hours, shooting thousands of images to assemble something that captures a moment in time that never happened.”

The thick impasto of information written atop the photographic breaks up the narrative, and slows down the time it takes to fully understand the story. As Gayeton explains, “I love film because it has a narrative with a beginning, middle and end. For me, photographs were always incomplete. The addition of text, taking my photo subjects’ ideas and writing them directly on the images, allows me to create an experience that takes time to decode and understand. And since all these elements are fluid, they can be animated or turned into a print, making them platform agnostic...something equally at home in print, on a website, in a pop-up show or a film.”

When asked if he worries that writing on the images will ruin their pristine quality, Gayeton practically snorts, “Oh please. I can’t be bothered with art. I just want people to buy local.”

Intriguingly, Gaeyton notes that while collectors have purchased images with the least amount of words, the pictures that garner the most hits on the Lexicon of Sustainability website and keep viewers on the screen the longest are the ones with the most words. As type designer Zuzana Licko of Émigré famously said, “We read best what we read most.

COMING TO A BARN NEAR YOUGetting those words out into the community is the work of Lexicon Pop-Up Shows. The Lexicon Pop-Up Show contains twelve lightweight collapsible easels that feature two dozen 24" × 36" full-color images from the Lexicon website, printed on FSC paper. There are currently 100 sets on view around the country. Instead of appearing in art galleries, the Lexicon Pop-Up Shows are displayed in classrooms, farmers’ markets, parks, community centers, libraries and even a barn. The goal is revolutionary: help local communities build healthy local food systems.

Like that latest of revolutions in business software, Gayeton chose to crowdsource his revolution. At any one moment, a dozen team members work on animations, calendars and text for the images. Curators are chosen from interested applicants who agree to host five temporary shows in their community, then serve as a lending library for others to put on events. It’s a crowdsourced guerrilla assault on the powers of agribusiness, one that delivers the information people need to make informed decisions about the food they buy. Once the Pop-Up Shows run their course, the images are donated to a local, permanent collection, so they truly are sustainable. 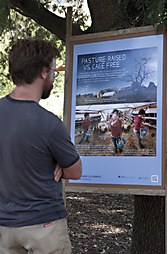 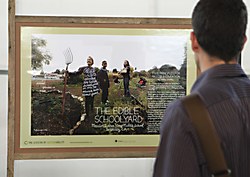 With a total of 2,400 images shown in hundreds of locations, Gayeton estimates the Pop-Up Shows “are the most widely seen collection of photos in America.”

“This is a pivotal moment,” Gayeton says. “These are prescient images, because the people photographed are prescient. Fifty years from now we’ll look back at a generation that took us from consumers to caretakers. I’ve done the $50 art book, I’ve had gallery shows and sold images for thousands of dollars, but I’m much more interested in becoming part of a movement that can change lives.” ca 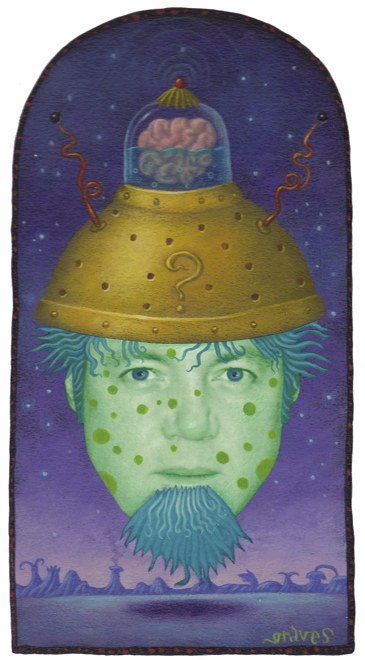 Columns / Insights
Illustrator Keith Graves
Keith Graves discusses his definition of a successful day, the drawing that got him “sent to the office” in grade school, and what gets him out of bed everyday. 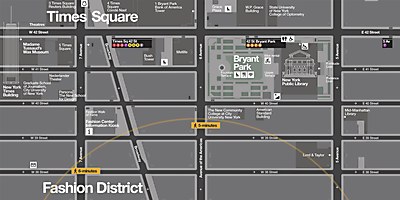 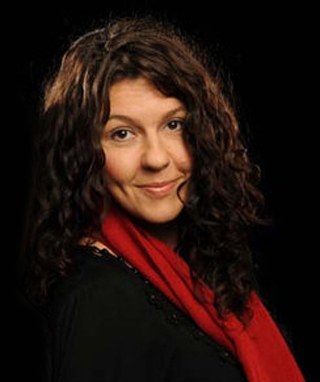