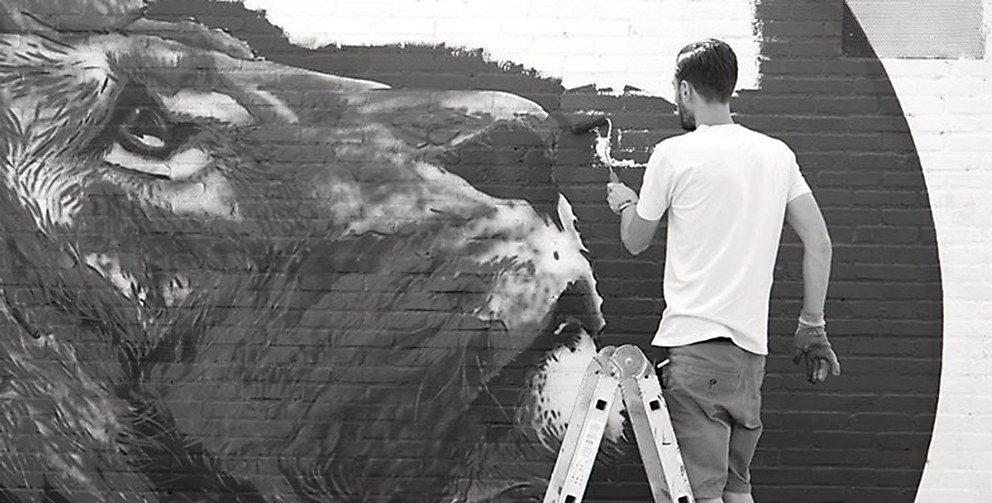 Elise Craig talks to artists adapting their street-style to the corporate canvas.

By Elise Craig
To artists and illustrators, landing commissioned mural gigs for corporate clients means more than just a good job and a cool project—it’s some of the best exposure out there, particularly when the murals pop up in advertising agencies where potential clients are sure to see them. “Murals are basically a huge business card,” says Toby Triumph, a London-based illustrator. “It’s amazing advertising.”

Throughout history, artists have taken commissions to paint the walls of everything from bars and department stores to post offices, monuments and even the ceiling of the Chrysler Building lobby. This kind of work is nothing new. But over the past couple of decades, companies—including ad agencies and Silicon Valley startups—have been quick to embrace murals that help set a tone and create a specific culture in the workplace. “The way people are approaching this is new,” says Shantell Martin, an artist who paints murals for commercial clients, including the MIT Media Lab. “They say, ‘Come put something on my wall. This is what we stand for—can you translate that?’”

Netherlands-based artist Robin Nas paints under his graffiti name, Zenk One. From left: a stairway Zenk One painted for the 40th anniversary of Scheepens advertising consultants at their office in Tilberg, Netherlands; a wall mural he re-creates each season at Red Bull’s Amsterdam offices to highlight upcoming events; the artist on a ladder as he paints a mural memorializing Johnny Boy, one of the first graffiti artists in Eindhoven.
For artists like Triumph and Martin, it means a potential client might see a photo of a mural or other work featured in their portfolios and call their agents to ask if the artist would be willing to bring his or her particular style to a different project. That’s how it happened a year or so ago, when London-based ad agency Mother called Triumph’s agent asking for the artist’s help on a last-minute mural project for a surprise guest. Triumph had to decline—he was headed out of town—but the agency insisted, eventually revealing that the mural was meant to be a red carpet for their VIP visitor, the queen. He jumped into the project, going back and forth with the company over the details of the mural’s design, hiring friends at a day rate to get it painted in time, and tracking down paint that could better survive foot traffic. “With clients, it’s a whole load of roughs,” Triumph says. “Every part of it has to be approved. There’s a lot riding on it.”

That’s a key difference between artists’ personal projects and their commercial work—particularly when that work is for the client’s own brand. Even if a company is a big fan of an artist’s individual style, that style still has to represent the image the company wants to put forward. “A client like Red Bull needs to have control over what the mural’s going to look like,” says Robin Nas, a Netherlands-based artist who goes by his graffiti name, Zenk One. “So they give me a lot of input before I even start sketching.”

Shantell Martin’s signature marker-doodle murals broadcast inspiration from the walls at the Wide Social Computing lab at MIT Media Lab (left) and the Brown Institute for Media Innovation at Columbia University (right).
That can sometimes be frustrating, particularly for artists like Tristan Eaton. When your passion is public street art and freehand spray paint, deadlines, revisions and working on someone else’s schedule can be frustrating. “All of these things become stressful and take a little bit of the magic out of the process,” he says.

Artist Toby Triumph fills in a floral “carpet” at London ad agency Mother in anticipation of a visit from the queen (left). Triumph’s “Wall Of Better” mural at Skype HQ in London was commissioned to encourage employee feedback and conversations around company whiteboards (right).
Martin grew up as a performance artist, or visual jockey, creating art on the fly in Tokyo clubs, and planning isn’t really her M.O. The massive mural she created for MIT’s Media Lab required a scissor lift and a whole lot of ink—but only one hour of work and no prep time. But when it comes to creating murals for picky commercial clients, she does make some concessions. “It’s very hard for a company to say, ‘OK, great, do whatever you want,’” she says. “The way I compromise there is, you can give me a list of key words or images or things you want me to think about when I’m drawing. I’ll look at those.”

Melding an artist’s style with a client’s needs doesn’t always work perfectly, though. Once, Triumph took a design for a restaurant mural through several rounds of approvals before it got shut down for being too daring for a restaurant that might serve kids—think ladies’ legs in high heels—even though they had asked for something a little risqué at the outset. Another client asked him to copy another illustrator’s style—something he absolutely refused to do.

Not all commercial jobs are totally dictated by the client. “A really good commercial job will push you in a new direction,” Triumph says. “It’s a collaboration.” The best jobs not only provide a lot of exposure and a big paycheck, but also enable the artists to grow in some way, by taking on a new challenge or expanding on previous work. “The majority of my commercial collaborations are related to my fine art or feature it in a certain way, so it’s a great opportunity to push yourself to try new things,” Eaton says. “Commercial projects typically have better budgets and go across mediums. You often have more resources to experiment, go bigger than usual or take risks.” 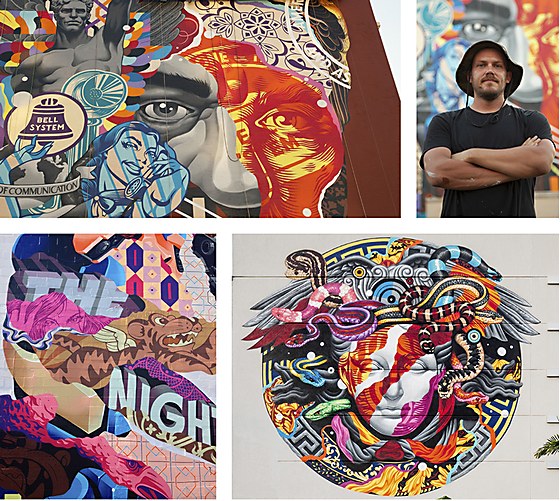 Los Angeles-based Tristan Eaton is passionate about public art. Clockwise from upper left: the largest mural Eaton has ever painted, in West Palm Beach, Florida; the artist in front of the 8,000-square-foot mural, which took 500 cans of spray paint and twelve days to complete; a Honolulu mural the artist painted to commemorate Versace’s first store in Hawaii. Eaton completed it in just five days, using only spray paint; a three-story mural Eaton created as part of the Pow! Wow! Hawaii festival.
All of that planning and back-and-forth with clients takes a lot of time, so Triumph charges a flat rate for the planning phase and a separate day rate for the mural’s installation. The price tags on Nas’s work depend on the project’s size, difficulty and style, conceptual or realistic. Martin’s minimum bill is $6,000 plus travel costs and accommodations. “That might be for a very small wall,” she says. “It becomes about time and the distance to travel. It could be from $6,000 to $70,000, depending on whether I spend two weeks in one place or an hour.” Meanwhile, Eaton’s work can range from $5,000 to as much as $100,000, depending on factors including the scope of the project and the long-term ownership of the image. Some projects also require insurance policies, if they’re large-scale enough. “It can be very expensive,” he says.

Agents who book artists’ gigs tend to receive about 30 percent of the full artwork fee. If clients approach artists directly, some muralists may pocket the entire commission. Though all of the artists have minimum rates in mind, they’re willing to be at least a little flexible for the right job. After all, a lower-paying project with creative freedom or a client they really like comes with added value. “Honestly, if I was really excited about the work that would come out of it, I’d do it for free,” Triumph says. ca

Elise Craig (elise.c.craig@gmail.com) is a freelance writer and editor based in San Francisco. She has written for Businessweek, fortune.com, outsideonline.com, Wallpaper* and other publications and has held positions at the Washington Post and Wired. 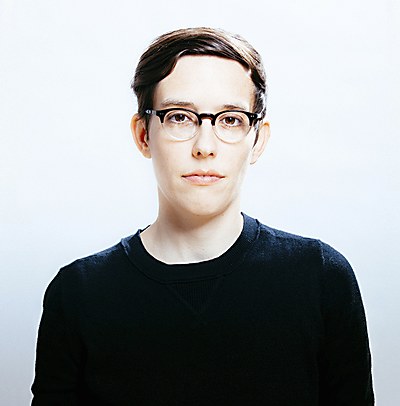 Columns / Insights
Farming the Fields of Creativity
Jocelyn Glei, editor of 99U, shares how to stay inspired.

Columns / Advertising
The Ten Things You Didn't See This Morning
Have the shiny objects of our world dulled our ability to see? Ernie Schenck shares his suspicion. 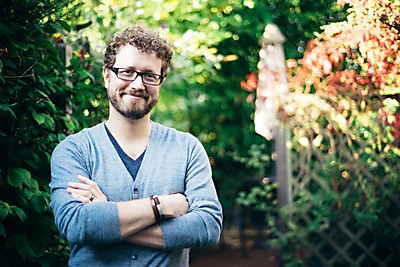