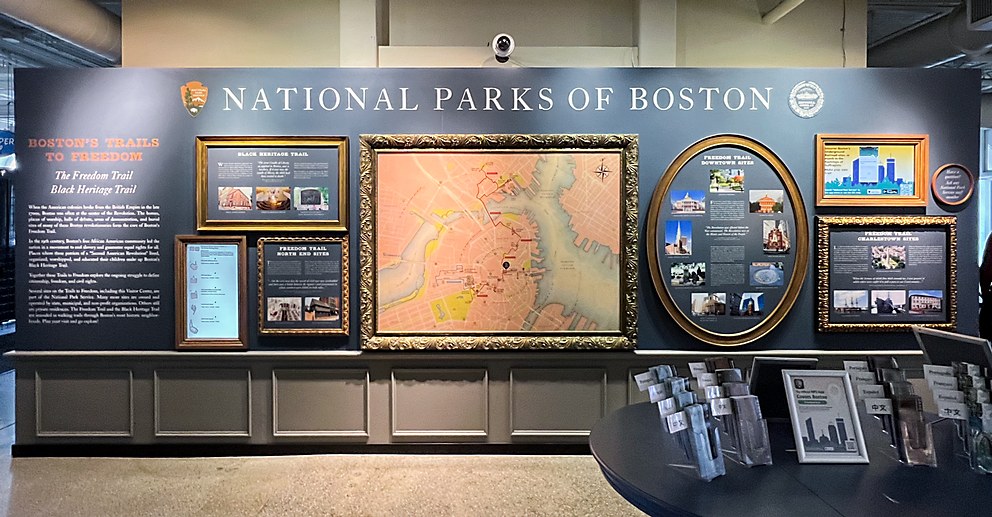 Background: Faneuil Hall is one of the most visited spots in Boston, with a prepandemic number of 18 million visitors each year—making it the seventh most visited tourist attraction in the world. It’s often the starting point for visitors and tour groups to explore the historical sites along the Freedom Trail and Black Heritage Trail around Boston. The first-floor visitor center run by the National Park Service (NPS) had a dark, dated, institutional look. When the good folks at the NPS brought us in, our goal was to elevate the visitor experience to reflect the history of the building while incorporating modern technology.

Design thinking: From the start, we wanted the design to fit the iconic location: typography that references the colonial era; a historical color palette; gilded picture frames, based on those seen in the Great Hall above the second floor; and a large, hand-drawn map illustration by artist Garry Walton.

Challenges: While the project was initially scheduled to be installed during a planned closure of Faneuil Hall for some structural repairs—during which we created a pop-up visitor center in their offices a few blocks away—but COVID-19 had other plans. Faneuil Hall was closed for months, which caused production stops and starts for the new installation.

Favorite details: The large-scale, hand-drawn map with three-dimensional elements of famous landmarks references the look of antique maps but accurately depicts the area, including the Trails to Freedom. Garry’s illustration strikes the right tone for the space, becoming both framed artwork and useful information. A typical vector map would look like a big Google map in that location. It’s fun to see how many people take photos of it to use on their tour of Boston even though they already have a map on their phone.

An added irony is that Garry is from “old” England (as opposed to New England), appropriate for an area with so much colonial history and a short walk from the Old North Church and Paul Revere’s house.

Time constraints: One thing we did look at when designing the walls was the time constraints of visitors. For example, just walking the entire 2.5-mile-long Freedom Trail can take about two hours, and that’s without lingering in any of the sixteen sites. We thought: ‘What if someone is in the North End and has time to see the historic locations there? Or if they’re on Beacon Hill and want to check out the Black Heritage Trail, including the Shaw 54th Regiment Memorial installation?’ So we grouped the photo and blurbs about the sites by location, conveniently arranged in individual frames.

Specific project demands: One challenge was incorporating the need for timely, changing information and video while keeping the overall historic look. Our solution was to create picture frames the exact sizes of the monitors and inset those into the wall, connected to computers that powered them in the space behind the wall—note the door on the side walls to access this space. Luckily, Eric Hanson Plass, besides being a park ranger and part of the client team, is a tech wiz who set this all up. 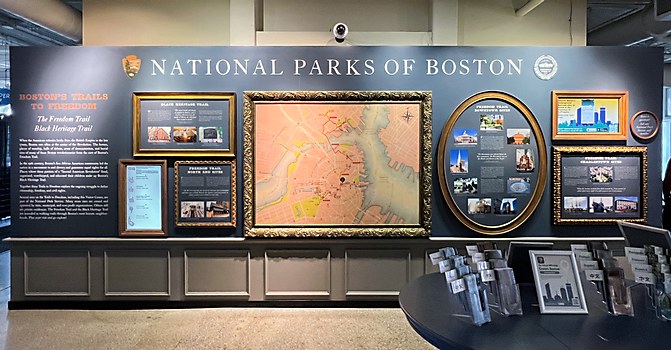 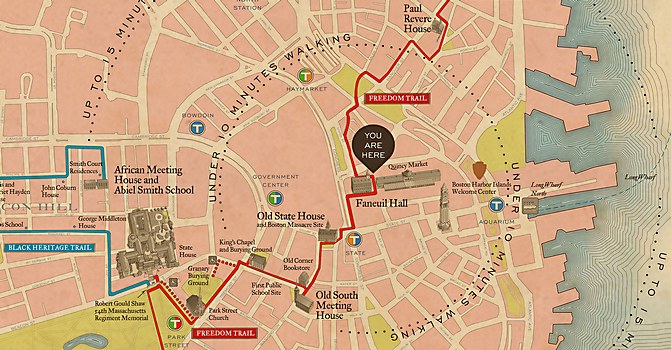 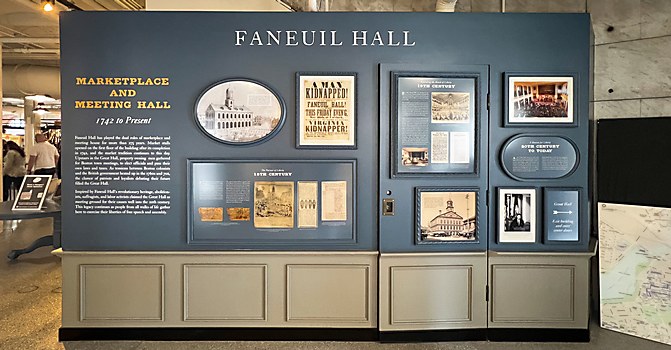 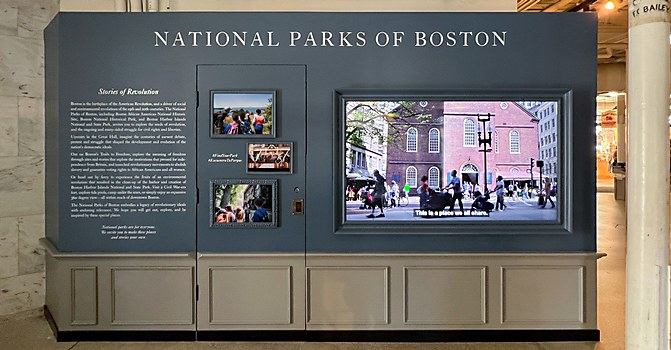 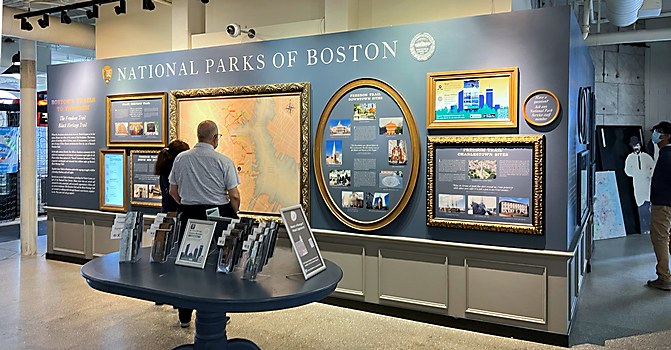 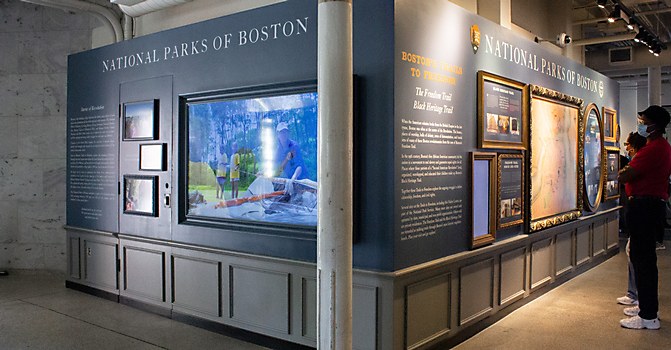 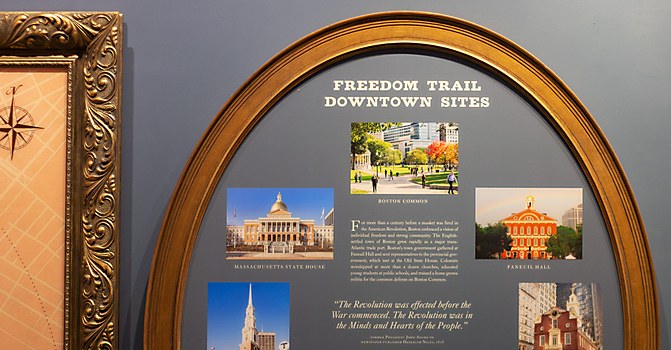 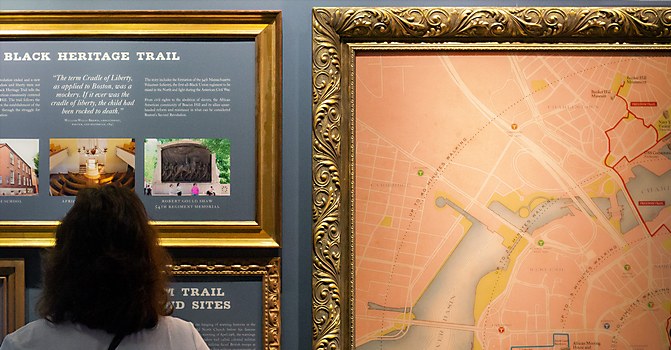 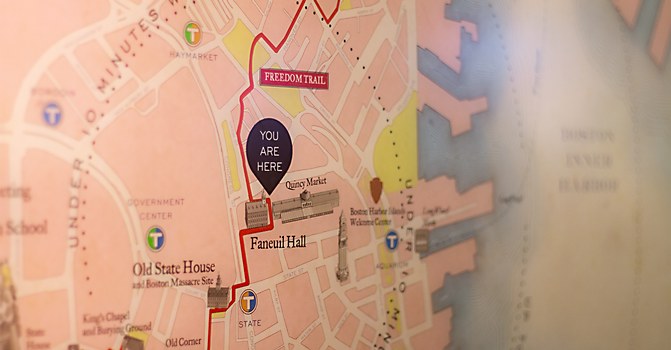 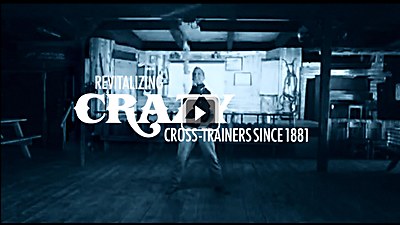 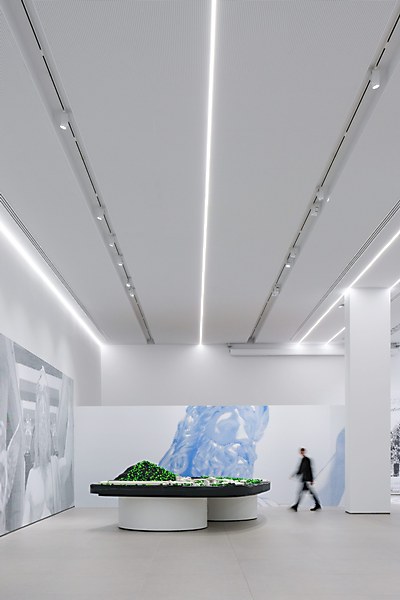 Exhibit / Interactive
Ancient Olympia: Common Grounds exhibition design
For a collaborative project by Microsoft and the Hellenic Ministry of Culture & Sport, A_DA created this interactive installation to bring the Olympia of antiquity to life. 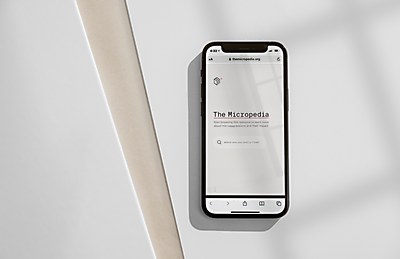