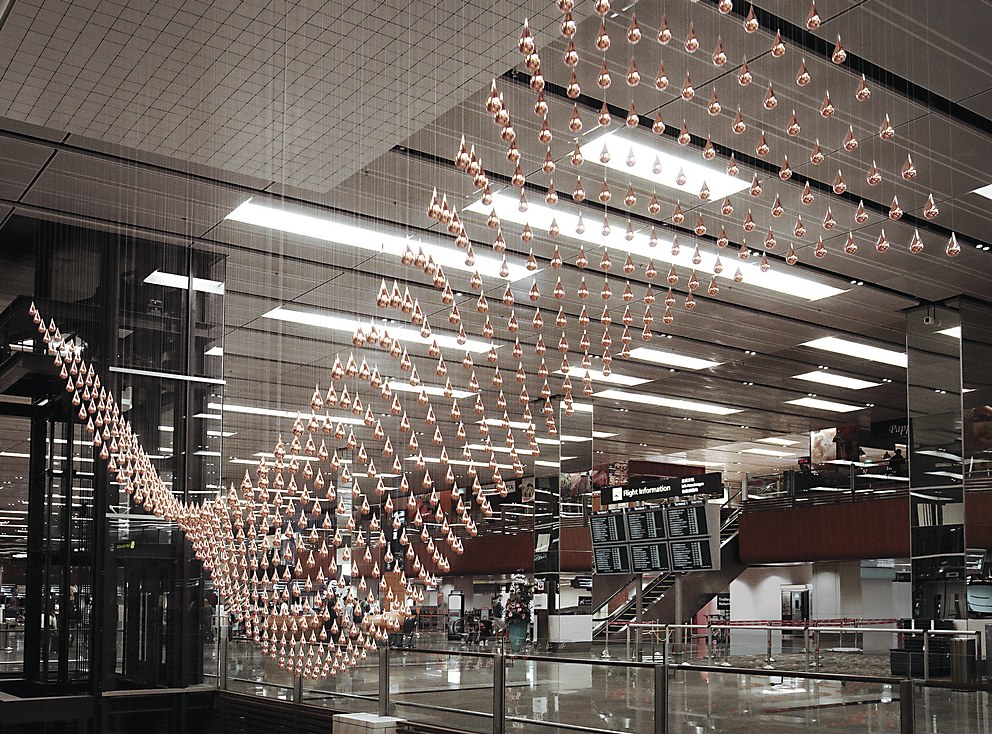 The studio in Berlin brings data to life with captivating installations and kinetic sculptures.

The first thing Joachim Sauter tells you about ART+COM Studios is that it is not a company. “We are a studio,” the co-founder and head of design says. Formed in 1988 as a Berlin-based collective of designers, architects and hackers, the studio began as a noncommercial entity to research the emerging field of computers. “We looked around,” Sauter says, “saw that designers had Macs on their work­tables and were using them as everyday tools to do desktop publishing and imaging. We figured out that the computer was more than a tool. It was a totally new medium.”

ART+COM formed to understand and challenge the medium. Forward-looking companies took note. In the early 1990s, Deutsche Telekom (DT) approached the fledgling studio with an interest in building a project that would showcase the massive amounts of bandwidth DT had at its disposal. The result was Terravision, a “networked virtual representation of the earth based on satellite images and aerial shots.” It is a description that bears an uncanny resemblance to Google Earth. Twenty years ahead of its time, the project is now in a federal court in Delaware, where ART+COM Innovation Pool is suing Google.

As more companies discovered the capabilities of ART+COM, the studio transformed into a commercial entity. Today it employs about 80 people in an office building in Charlottenburg, a prosperous business district in central Berlin. On the seventh floor, overlooking Wittenbergplatz, the view from its 360-foot terrace is astounding. It’s also one of the key reasons the company stayed in West Berlin.

From his balcony, Sauter can see the Kaiser Wilhelm Memorial Church, and he looks out on a city that has been the capital for five different regimes in a single century, from the kaiser to the Nazis to today’s democratic republic. “Because every regime tried to destroy the legacy of the former ones, Berlin is a city in constant change, and that supports innovation. We build, we don’t preserve,” Sauter says. “When clients come to our office, they seek something completely new. As a counterbalance, they like to see some­thing they know. The sense of tradition visible from our promenade is comforting,” Sauter says, adding with a laugh, “And the rent is reasonable.” 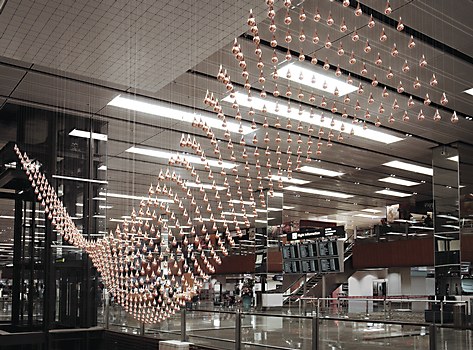 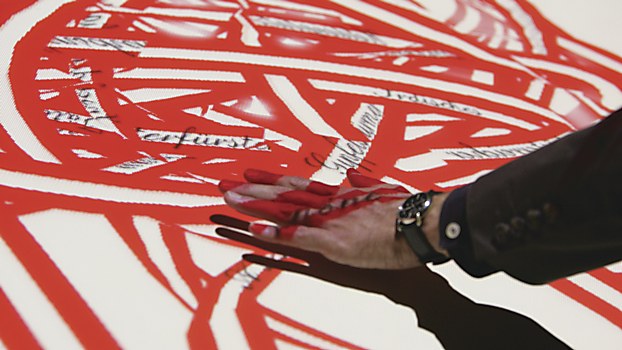 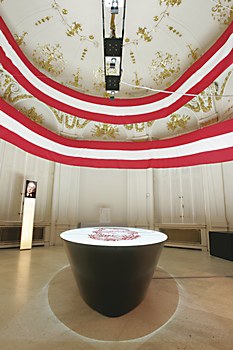 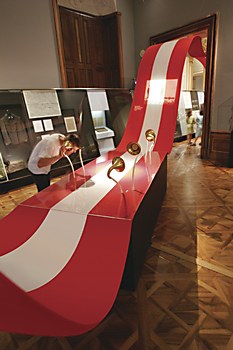 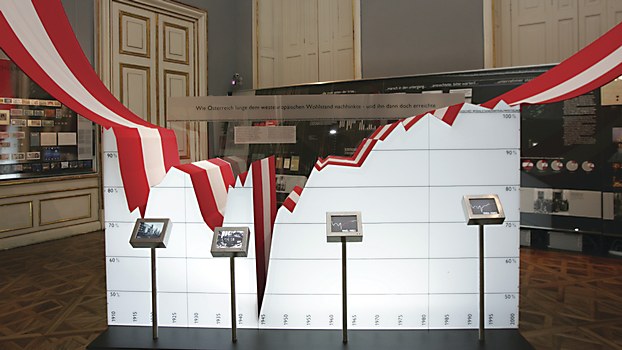 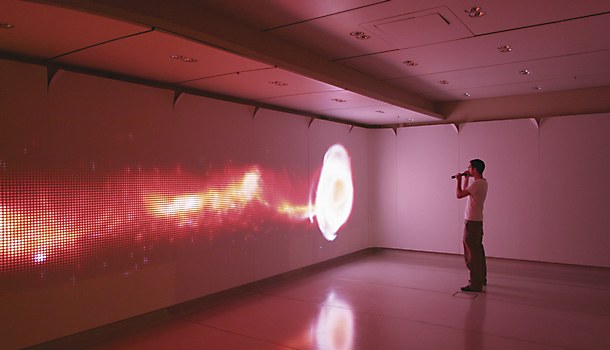 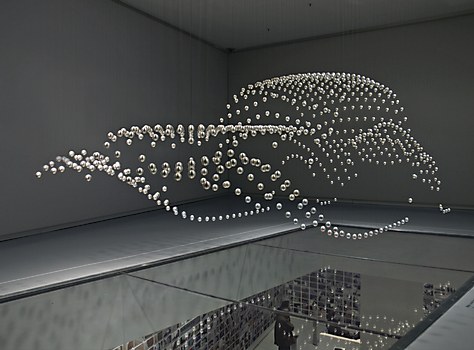 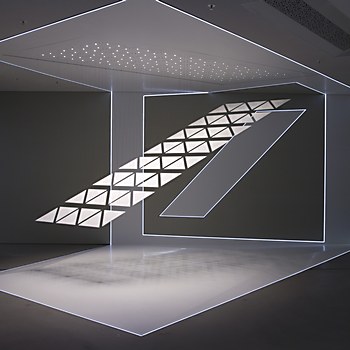 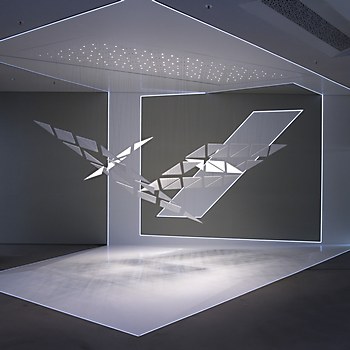 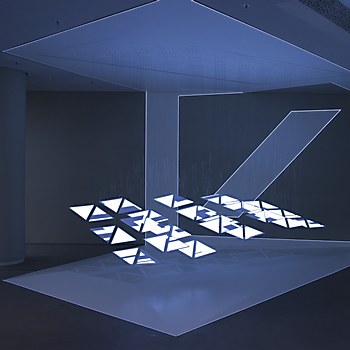 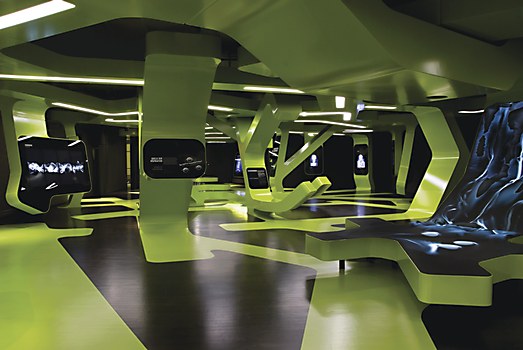 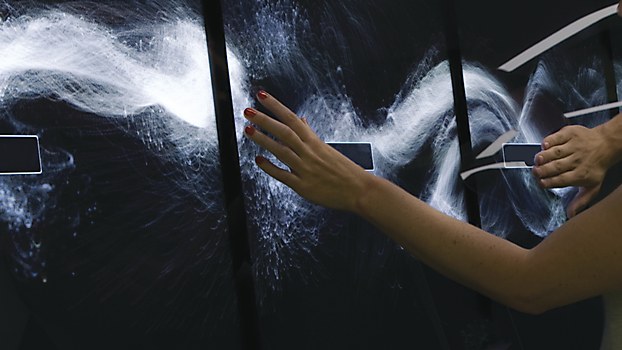 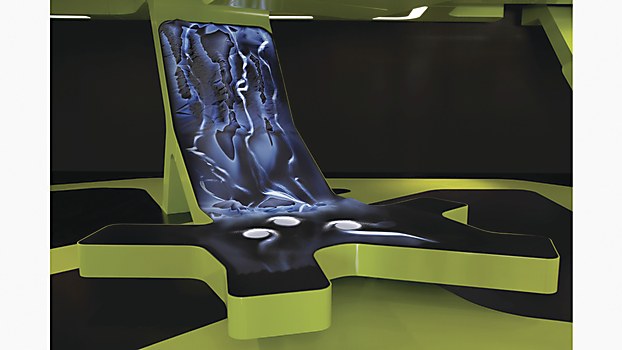 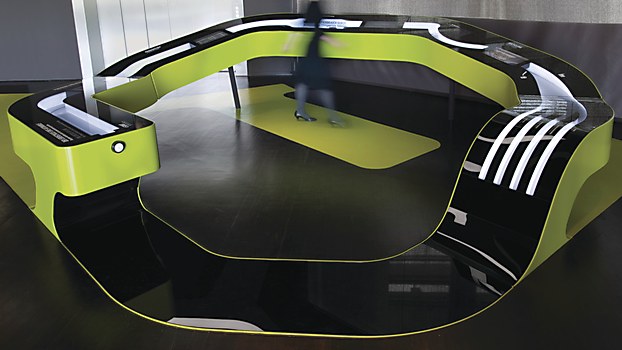 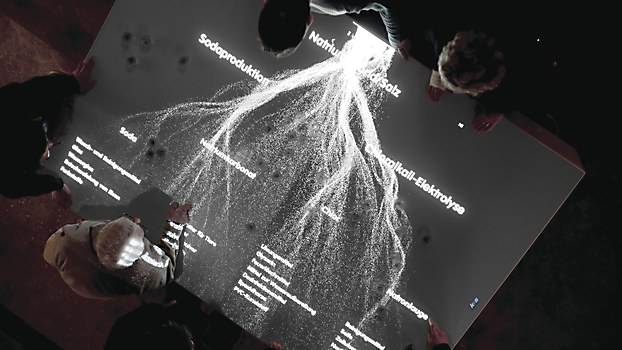 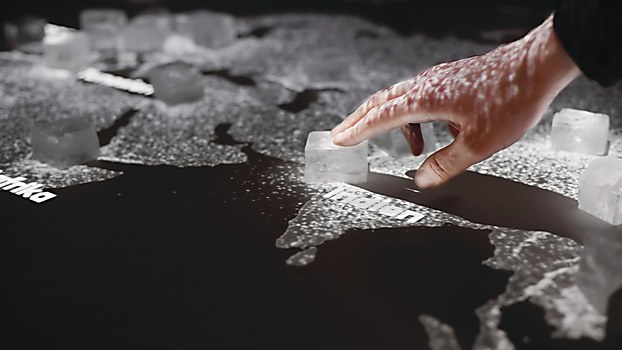 STORYTELLING IN SPACE
When possible, ART+COM incorporates the viewer as part of the installation. Too many interactive exhibits are just an add-on to the experience, Sauter believes. “They are screens not integrated into the space. Instead, we want to make the surface of the space part of the conversation and make the viewer part of the narrative.”

At the World Expo 2000 in Hanover, Germany, ART+COM designed an installation for the Bodymover exhibit about interfaces that did away with interfaces entirely. As Sauter explains, “We asked ourselves, ‘How do we design an inter­active exhibit without a mouse, a joystick or a keyboard?’ We wanted a completely invisible interface.” The result included a capacitive-sensitive floor, a camera detection system, light projection and sound triggers that use the presence of the viewer to bring the exhibit to life. “It’s just you, your motion and your behavior,” Sauter says.

The firm also plays with space and motion through analog projects and devices. An anamorphic sculpture for Deutsche Bank uses visual sleight of hand to transform an abstract architectural structure into the Deutsche Bank logo. Displayed at the top of a staircase in the bank headquarters lobby, the anamorphic mirror refracts dozens of chaotic shapes and surfaces when viewed from a distance. As the viewer approaches, these shapes change constantly. Seen from just the right vantage point, the anamorphic mirror resolves into a precise and recognizable shape: the Deutsche Bank logo. In a subtle grace note, as viewers reach the top of the stairs, they see themselves reflected in the mirrored surfaces, framed by the wall-sized logo.

Whereas anamorphic sculptures require the viewer to move through space, ART+COM’s installation at the BMW Museum uses space as a stage for its own movement-inspired story­telling. Using 714 motors and metal spheres hung from the ceiling, the firm created a dynamic shape that tells the story of car design over time, according to Sauter. Driven by electric motors and controlled by a computer, in the span of seven minutes a configuration of spheres slowly morphs from “spatial white noise” into the form of a car. As each narrative is repeated, five distinct figures carve out iconic car designs from BMW’s history.

It is important to take risks and do things you never did before.”—Joachim Sauter

In Singapore’s Changi Airport, Kinetic Rain, another dynamic surface, comes to life. More than 600 brass raindrops, each attached to a motor controlled by a high-precision rotary encoder that calibrates speed and position, fluidly rise and fall from the ceiling on nearly invisible wires. To choreograph the sculpture, ART+COM built a 3-D model, animated the prototype by hand, then transferred the data to a computer program in which each sequence was written as custom code. And finally, the data was converted and fed back to the kinetic sculpture in a form that motion controllers and servomotors could understand.

The team, a crew of eight, included conceptual and compu­ta­­tional designers, mechatronic experts, and media technologists, as well as fabricators and installers from MKT, a Munich-based mechatronic workshop. Kinetic Rain was more than four years in the making. The result is the world’s largest kinetic sculpture, an airborne ballet that combines move­ments to create a continuous surface, two overlapping sections, a volume that suggests the wing of an airplane and finally individual points in space. The effect is hypnotic. And possibly kleptomania-inducing. One visitor was so entranced she tried to take one of the copper drops as a souvenir by jumping into the security netting 25 feet off the ground and latching onto one of the spheres. Her high-wire act ended in arrest.

TOUCHED BY AN ANGEL
ART+COM can be—and is—choosy about the projects it accepts. “We look at the potential for innovation,” Sauter says. “That’s our main focus today: in everything we do, we have to push the boundary of the medium.” And although its work defines what’s new in the field, clients are finding ART+COM the old-fashioned way: word of mouth, awards shows, mentions on blog posts, and first­hand encounters with its work in museums, airports and public spaces. In an intriguing twist, Sauter reports that several commissions have resulted from client visits to other design agencies where they encountered ART+COM work displayed on mood boards. That’s exactly how a project for a shopping mall took shape. “The clients saw a sketch on a mood board and decided that was how they wanted to enhance their space,” Sauter says. “We are the mood board kings!” he says with a laugh.

ART+COM kicks off each new project with a meeting that unites an interdisciplinary group to approach the challenge from different angles. For a new content-based museum project, Sauter says, those sessions typically include concept designers, a media designer, content people and a project coordinator. “There’s lots of sketching, lots of research for references and an insistence on exploration, to find different approaches from what had been done before.” There are moments of pure inspiration, Sauter says, “where you can hear angels walking through the room.” But just as likely, he says, there are “loud and heavy discussions.”

In everything we do, we have to push the boundary of the medium.”—Joachim Sauter

And when that doesn’t work, Sauter heads to a nearby lake and goes canoeing. “We often have the solution already in our subconscious and have only to open the door between the subconscious and the conscious.” Canoeing’s repetitive movement guides Sauter to the “flow that opens this door, and I usually come back to the studio with the challenge solved.”

It’s an approach that, at the end of the day, leads to a good result, Sauter says, even if it “leaves you totally exhausted.”

Nearly every project has seen its share of major obstacles. With just a few weeks remaining before the opening of the BMW Museum, ART+COM set out to conduct test runs of the installation in its workshop. After a single run, a bug in the code switched the instructions. So instead of lowering the spheres 70 centimeters on the next run, it raised them 70 centimeters. Straight into the ceiling. In a matter of milliseconds, the entire installation was destroyed.

Twenty-some years after its founding, ART+COM is still inventing itself. The company is looking beyond installa­tions to the design of services and experiences. For a large German bank, ART+COM is exploring what the future of banking might look like. With 90 percent of retail banking in Germany conducted online, bankers realize they need to leverage their brick-and-mortar facilities in new ways. According to Sauter, that could involve “media-based furniture that brings the space into focus. You won’t walk into a bank in the future and only see a screen on a banker’s desk. Wherever you are in the space, every surface will be transformed by media into a discussion point for new products.”

Still driven by transformation and reinvention, ART+COM constantly explores new media’s potential to shape the way we think about and interact with the world. Its neighborhood provides a sense of history, but the studio refuses to look back. “We moved into inter­active exhibit design and transforming physical spaces because, quite simply, we got bored,” Sauter says. “After 20 years of working with screens, we reinvented ourselves to tell stories with dynamic objects in physical space. We try not to repeat ourselves. It is important to take risks and do things you never did before. You need to be hungry to find new fruits.” ca 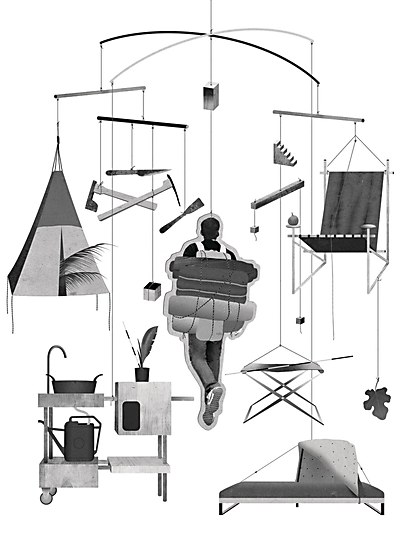 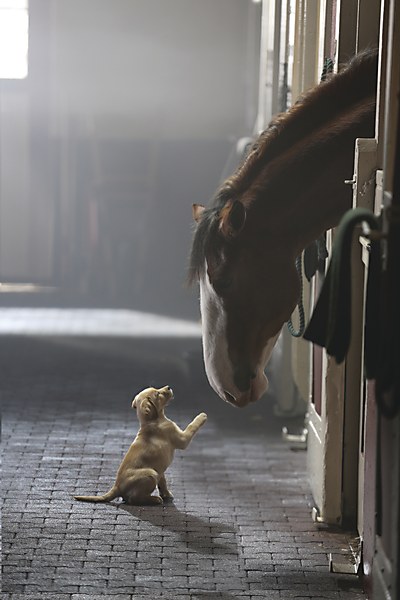 Features / Advertising
Anomaly
With offices from New York to Shanghai, this ad agency lives up to its name by selling its own products. 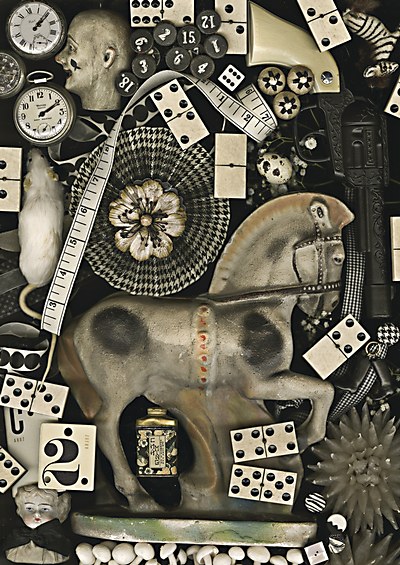