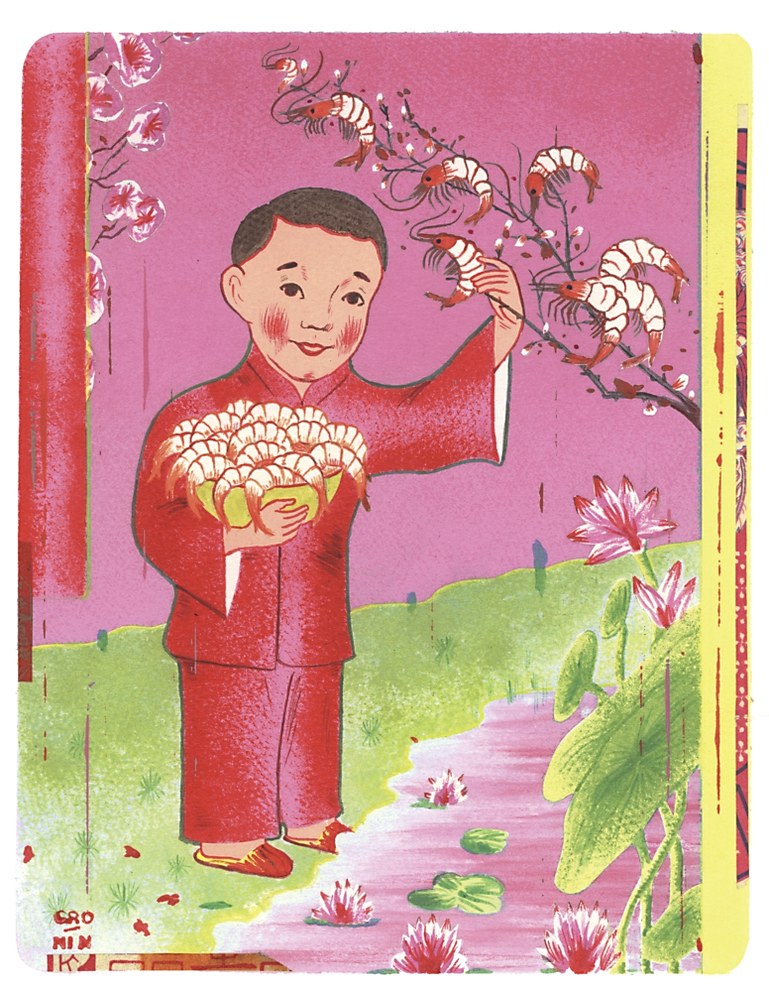 As the style of the New York illustrator evolves, one thing remains constant—his commitment to self-expression.

Whatever our professions, we are all linked to the tools of our trades. But illustrator Brian Cronin is inextricably, physically so. At a recent breakfast meeting at a lower east side café in New York, he describes his connection to his materials in corporeal terms. Cronin recently undertook the arduous process of shifting from the pen, which he’d used for years, to brushes and acrylic paint. “It was like sawing off my leg,” he says, delivering the characteristically hyperbolic statement with the Irish brogue that skims every word.

In a self-portrait for Print, Cronin depicts himself kneeling before a sheet of paper. His form is human, but for his head, which morphs from his shoulders into a tube of paint. This he squeezes with his hands, issuing forth a stream of pigment that collects in a heap on the floor in the shape of a brain. It’s as if, for Cronin, the distinction between the paint he uses to express his thoughts and the thoughts themselves dissolve.

For all that, the image is comedic. This is, after all, a man squeezing his brains out. But Cronin communicates the concept with such technical virtuosity that its humor registers only after the beauty of its rendering does. In a similar way, the full gravity of Cronin’s more haunting imagery has a tendency to sneak up from beneath the surfaces. In an illustration for a 1999 Newsweek article about China’s nuclear capacity, a beatific Asian man gathers white blossoms from a tree. Rendered in an almost psychedelic palette of purples, greens and pinks, the landscape is deceptively sublime. But soon, the eye begins to understand that these blossoms are actually the mushroom clouds of atomic explosions. It typifies Cronin’s ability to add another layer of depth to the words put before him in an article, even as he deftly encapsulates their essence. 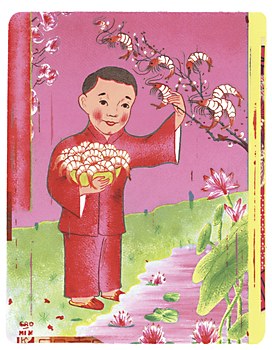 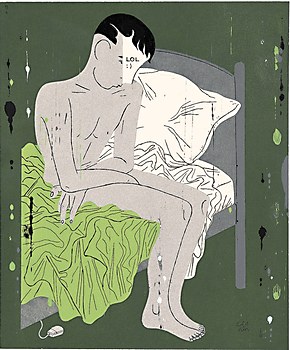 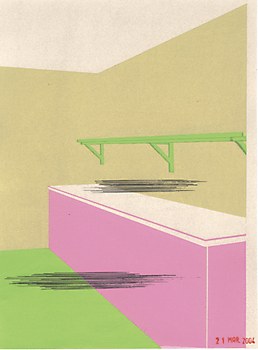 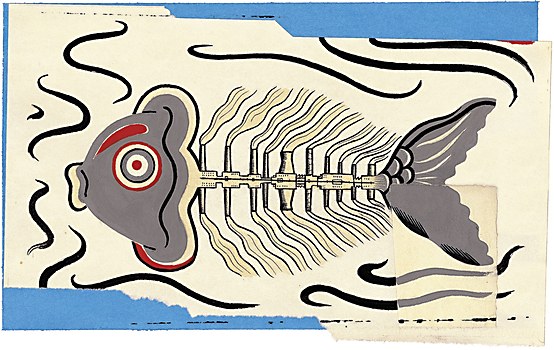 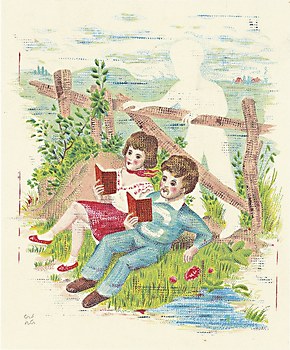 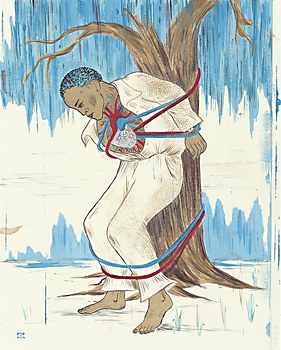 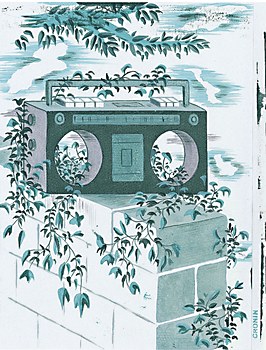 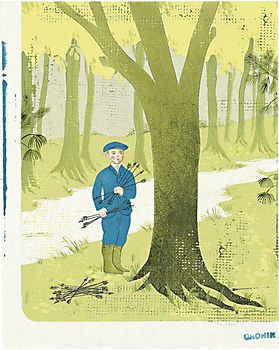 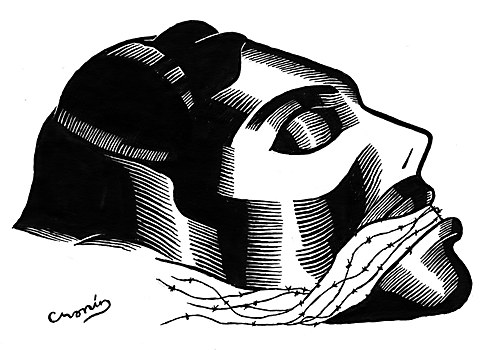 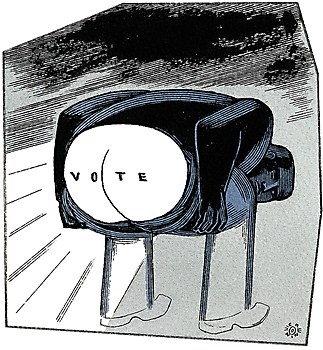 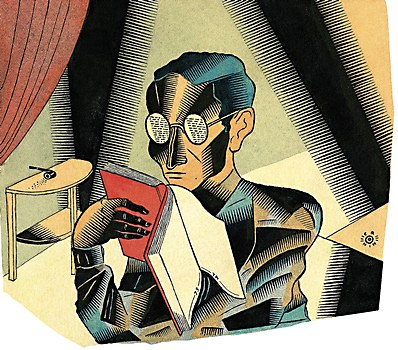 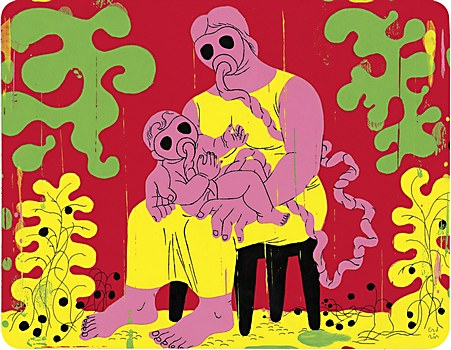 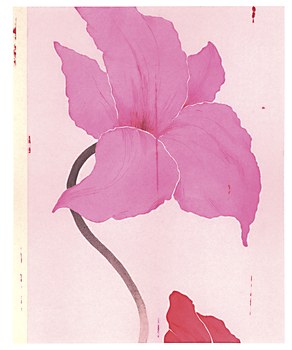 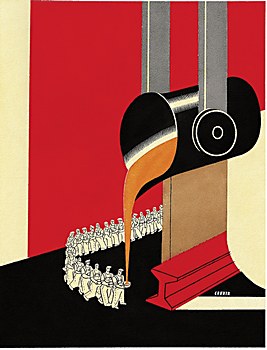 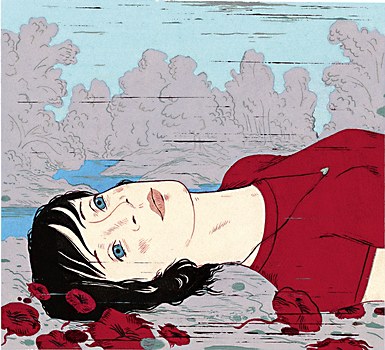 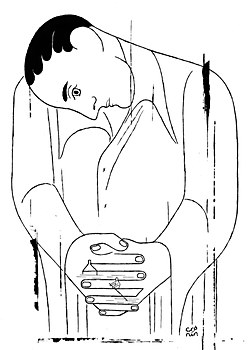 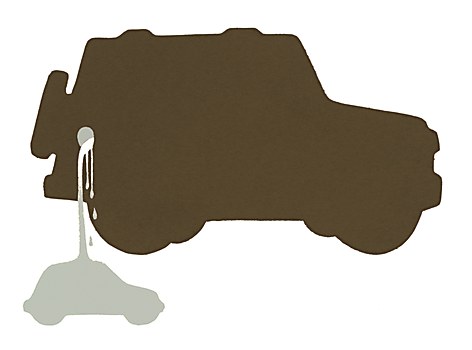 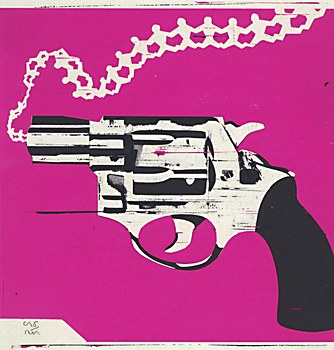 “There’s always that wicked combination of intellect and beauty that makes his work so potent,” says Fred Woodward, design director of GQ, who has worked with Cronin since 1987. George McCalman, art director at Mother Jones, calls it a fusion of aesthetic precision and cerebral consideration. That fusion is perhaps the one prevailing theme in Cronin’s continually evolving body of work. He himself says his need to constantly change is a kind of affliction. “It’s a disease,” he says, displaying his deadpan, comedic sensibility that—as it does on the page—creeps up on the ear a few beats after its delivery. “Or it could be. It’s a disease of discontent.”

Cronin’s shift to brushwork in 2002 loosened his hand, introducing more realism, line work and texture. Previously he removed all traces of human imperfection from his work. If he saw a brush stroke, he says, he’d start over. Today, Cronin is interested in what he calls mistakes—visible brushwork, rich textures or drops of paint. “I want to feel the human spirit in the thing,” he says, “to feel that there’s somebody there—mixing the paint, building the image.”

Modestly, Cronin says his clients have become accustomed to his evolving style and no longer ask him to produce what he had two years ago. In fact, the likes of the New York Times, Entertainment Weekly, Audubon, GQ, Outside and Reader’s Digest, to name only a few, tap him for precisely his ability to surprise. His work has been shown in exhibitions across the world, and has earned steady recognition from such venues as American Illustration, Society of Illustrators, Art Director’s Club, Communication Arts, D&AD and Society of Publication Designers, among others. In 1998, the Irish Museum of Modern Art honored him with a solo exhibition.

Cronin cites Celtic art, Japanese prints, contemporary sculpture, Mexican art and Russian Constructivism among his many influences. His strong graphic sense stems from his degree in graphic design from Dublin’s National College of Art and Design. But he identifies with no one group or style. Cronin’s images are intensely personal, rendered not to explain a text, but to provide his own, deeply-felt interpretation. Without hesitation, he’ll decline work if he senses an assignment won’t afford him the freedom to do so. “It’s completely important that the work be personal,” he says. “Because what I do is me. When you read something, you react in a certain way. I draw in a certain way, and the reaction comes out in that way.”
I want to feel the human spirit in the thing, to feel that there’s somebody there—mixing the paint, building the image.” —Brian Cronin


The seeds of his commitment to self-expression were planted when it was most scarce—at the all-boys Catholic University School in Dublin. Although Cronin didn’t cause more trouble than any young artist confined to a box, it was the type of place whose administrators—enforcing their values with the strap—conflated independent thinking with criminality. Art, for which Cronin was regularly honored by otherwise negligent schoolmasters, was his saving grace. Leaning back in his chair, he calculates the number of years he spent at the school—age seven to seventeen— and makes an attempt to diminish its impact. After all, it was only ten years. A moment later, he adds: “God, is that all it was? It feels like a thousand years.”

If his elementary education had him fighting for individuality, Cronin’s family cultivated an appreciation for it. He grew up in the bed and breakfast his family ran in Dublin. To hear him describe it, the Rosedene House on North Circular Road was as much a tourist destination as a safe haven for the eccentrics in need that his mother took in. She often “forgot” to collect rent from these boarders, whose hard-luck stories reach Dickensian proportions. One woman who would have been called “touched” boarded there in ostensible exchange for the domestic help she wasn’t actually capable of providing. Cronin learned to decipher the grunting communications of another boarder—a deaf and mute man characterized then as “simple”—who became part of the family.

Others were situated to the far left of the ERA’s social mores. Dubliners in the 1960s didn’t typically suffer cross dressing gladly, but when an employee asked Mr. and Mrs. Cronin if he might wear his high heels at work, they said that would be fine. So it came to be that before their sightseeing through quaint old Ireland, Rosedene House guests were served breakfast by a waiter in drag.

Buttressed by this nontraditional frame of reference, Cronin never felt the need to shape his identity according to conventions. Even at a young age, he knew he didn’t want the “real job” his teachers extolled. As they endeavored to enlighten Cronin on the value of conformity, he maintained his convictions and his love of art, eventually finding full expression for it in college, where a multidisciplinary approach gave him freedom to explore painting and drawing as well as the principles of design. In 1981, he spent a wide-eyed summer in New York as a timid intern at Milton Glaser’s studio. “I was green,” he says. “And not because I’m Irish.” Cronin eventually overcame his awe and began to realize that the highly structured, technical requisites of graphic design were ill suited for his temperament. But Glaser’s influence extends beyond that.
There’s always that wicked combination of intellect and beauty that makes his work so potent.” —Fred Woodward


On his return to Dublin, Cronin graduated and was hired on retainer as an illustrator for The Irish Times. It was a coup, but New York had exposed him to opportunities that Dublin, in the economically bleak 1980s, couldn’t approximate. When Glaser, who was giving a speech there, met briefly with his former intern, they had one of those rare exchanges in which few words—and Cronin says he didn’t need to hear more than that—inspire bold action. As Cronin remembers it, Glaser turned to him and said, simply, “Get out of this place.” With a $500 loan from his brother, even then a pittance, Cronin moved to New York in 1985, igniting his career in earnest when almost immediately, he landed an illustration for the New York Times Op-Ed page and, a week later, another for Time. A windfall of work ensued.

Today, Cronin divides his year between a New York apartment and his home upstate. There, he works in an 1846 barn beside his wife Siúin Kelly, a textile designer. “I don’t want to live in the suburbs,” he says, “and I don’t want to be doing suburban art, if there is such an art.” Most recently, he’s begun spending more time on his personal work, which will be exhibited at a Los Angeles show in September 2006, and he’s currently working on a book of his collected works.

Over coffee, Cronin confesses that he recently bought a pen, in part because he’s missed it. But as he elaborates on the impulse to pick up the familiar tool, he credits a force—with tongue in cheek, as ever—that exists outside of him. “Now I can hear my internal machine saying, ‘Don’t get too loose,’ and maybe it’s telling me to go back to the pen—that it’s time to clean things up again. I’m like a robot, you know? Like a prisoner. No control over it. You think you’re doing something free and then your own system controls you.” He speaks with mock solemnity, as if the burden of being himself is just too much. But of course, in the end, the point is that no jailer—not of art or of life—is capable of confining Cronin to any one style or system. ca 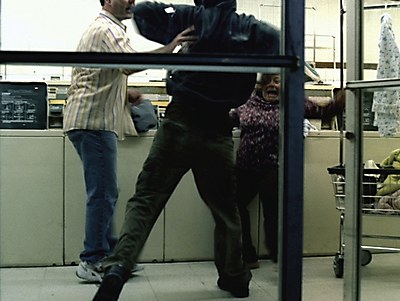 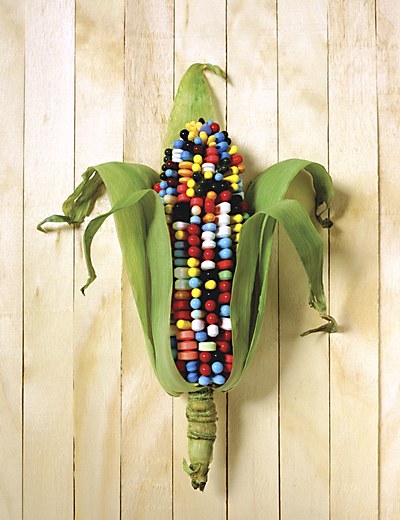