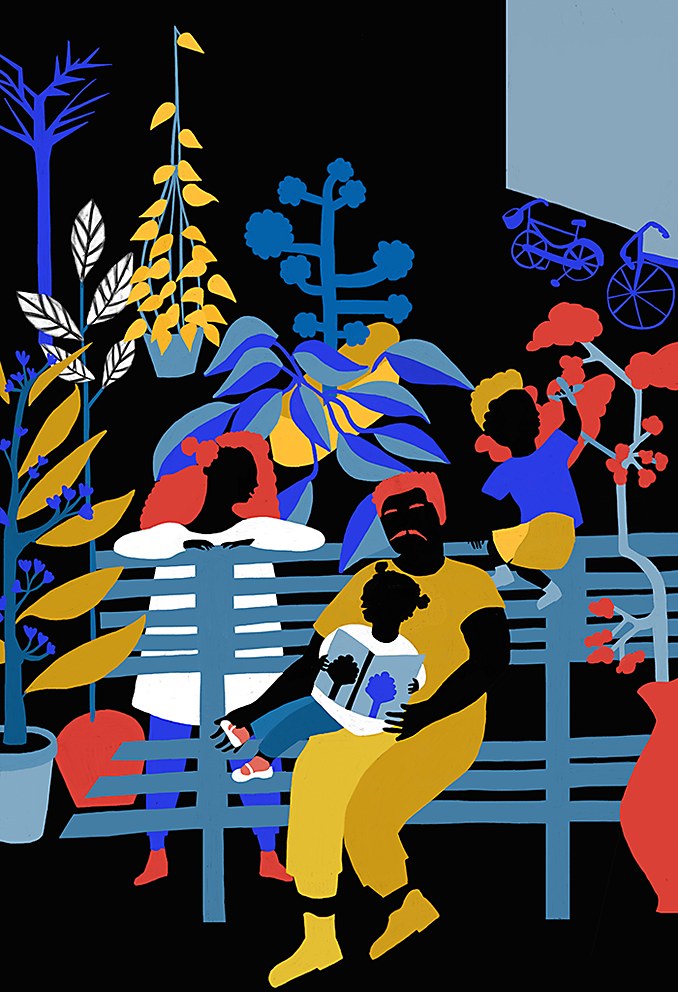 Things could have panned out very differently for Diana Ejaita. As of May 2019, she rarely checked the email address attached to her website, an old one, where New Yorker art editor Françoise Mouly had been trying to get in touch with her. At that point, Ejaita had only recently returned to her home in Berlin from a three-month residency at the Arthouse Foundation in Lagos. She had other priorities.

But Mouly was persistent. She got in touch again a few days later, this time reaching out to Ejaita’s active email address. She was working on a Mother’s Day portfolio, she wrote, to highlight the work of women artists from around the world. Would Ejaita be interested in submitting sketches for consideration? The deadline was short, just 48 hours away. “I don’t think I ate or drank for 48 hours,” the Nigerian Italian artist recalls, laughing. “Since I’d just come back from Lagos, I was intensely full of images of the city, so I decided to depict motherhood from that point of view.”

She made three sketches, the final one a combination of elements that have become her signatures. Contrasting blocks of narrow lines create depth and texture, suggesting a linocut print or swatches of fabric. Primary colors pop against a black background. A yellow keke, the motorized rickshaw omnipresent on the streets of Lagos, nods to her Nigerian roots. A faceless mother, hair piled high in a wrap, kneels down to her daughter and takes her hand, exuding intimacy in the simplest gesture.

While the portfolio never ran, the sketch resonated with Mouly. On May 13, 2019, a completed version, titled Iya Ni Wura (Mother Is Gold), ran on the cover of The New Yorker.

Ejaita hasn’t stopped working since. Her minimalistic yet impactful illustrations have been featured in the Atlantic, Harper’s Magazine, the Guardian, the New York Times, the Financial Times, the Economist and British Vogue. There have been book covers for publishers in the United States, Italy and the United Kingdom, and a Google Doodle marking the 119th birthday of Nigerian women’s rights campaigner Funmilayo Ransome-Kuti.

“It’s been an escalation of more and more projects coming in, each one more interesting than the last,” Ejaita says. “It [has been] absurd, surreal almost.”

“She’s become a star! As she should be,” Mouly says of Ejaita’s success. She attributes this to the artist’s knack for conveying complex themes with simple imagery, which she considers a mark of skill, saying, “To distill things into a simple image, you have to be very disciplined and focused—it’s always easier to just keep adding, to keep talking. And it’s difficult to do people in a way that they are abstract, but still have that emotional quality to them.” 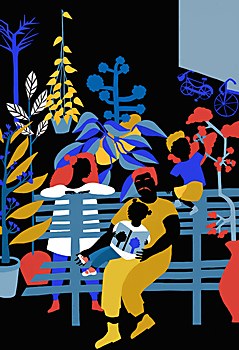 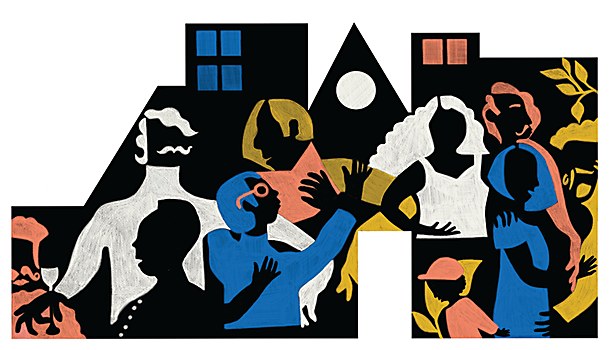 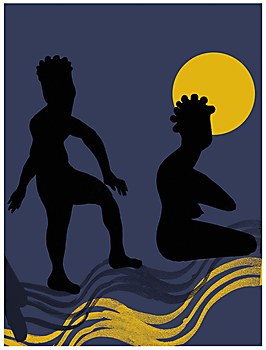 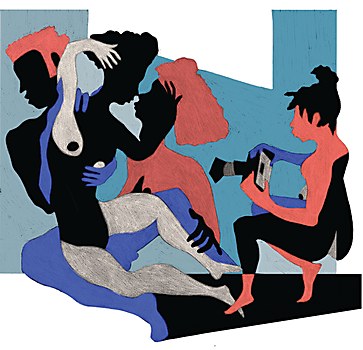 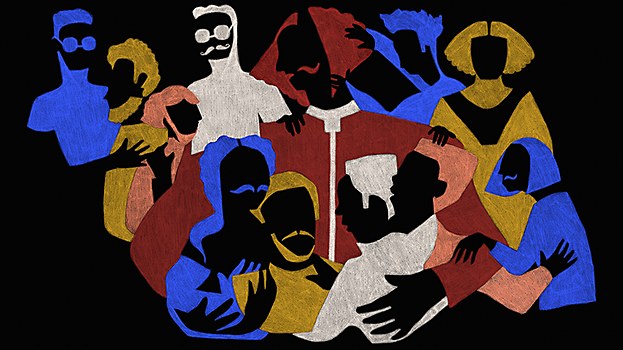 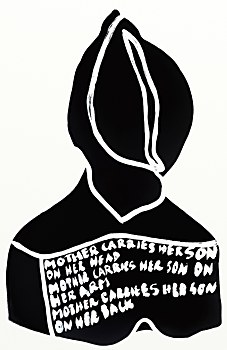 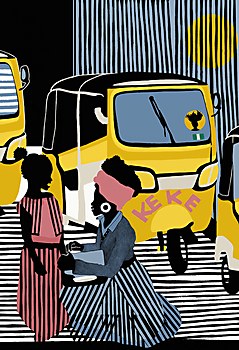 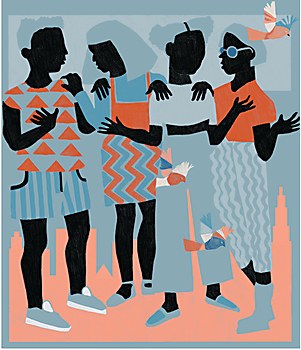 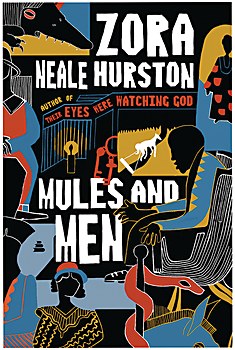 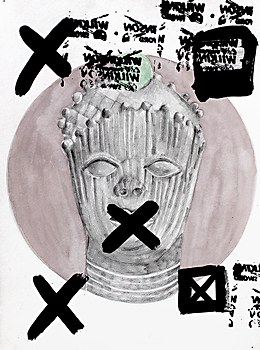 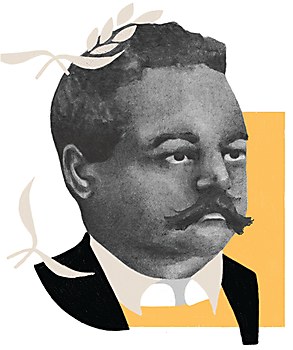 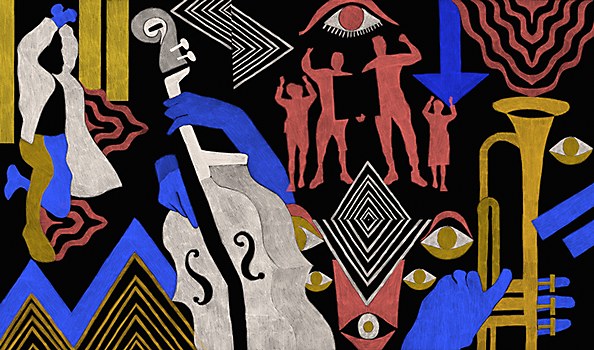 For a long time, illustration was just a small part of Ejaita’s output. A graduate of Rennes 2 University in France and Germany’s Braunschweig University of Art, the 35-year-old had only taken on a handful of commissions, including a cover for the feminist magazine Bitch in 2018, before Mouly discovered her work.

She was a fine artist first, exploring gender, colonialism and racial identity through bold black-and-white prints, paintings and ceramics, as well as a textile designer. In 2015, she launched her presciently named fashion brand WearYourMask, which incorporates West African textile traditions. Endlessly curious and creatively omnivorous, she has drawn inspiration from the legacies of Pieter Bruegel the Elder and M. C. Escher; modern African American printmakers like Elizabeth Catlett and Dr. Samella Lewis; and the textile histories of Ghana, Nigeria and Senegal, where she completed a residency in 2017.

But as she divulges more about her practice and business, her affinity for illustration begins to feel like an inevitability. Above all, she understands the power of stories.

Ejaita was born in Cremona, a city in the north of Italy renowned for its violin makers, to an Italian mother and Nigerian father. The family traveled extensively when she was growing up, exposing her to the diversity of the world’s cultures, but she remembers struggling to find people she could relate to on matters of race and culture. Her father, a percussionist who had immigrated to Italy for school and rarely returned home, avoided integrating Nigerian culture into her upbringing, determined to keep his past behind him. Meanwhile, her White friends brushed off her experiences of racism. “I think I was the second mixed girl born in that city,” Ejaita says. “[Learning about race] was very challenging in that everything needed to start from point zero. It was a lonely process, actually. I really had to go for it on my own.”

To distill things into a simple image, you have to be very disciplined and focused—it’s always easier to just keep adding, to keep talking.” —Françoise Mouly

With Afro-Italian stories hard to come by at the time, as a teenager she sought out stories from the continent and the diaspora to develop her understanding of Blackness. Today, she cites the Nigerian author Chinua Achebe, French Congolese writer Alain Mabanckou and the “enlightening” American writer James Baldwin as some of her enduring influences, and she actively follows the work of the contemporary writers Chimamanda Ngozi Adichie and Sefi Atta of Nigeria, and Somali Italian writer Igiaba Scego. This appreciation for Black storytelling seeps into every part of her practice. In 2019, she culminated her residency at the Arthouse Foundation in Lagos with a show of silkscreen prints, sculpture and video that reinterpreted works by Nigerian author Amos Tutuola, who evocatively incorporated African folklore and imagery into his novels; and the use of repeated symbols in her fashion line—she designs each symbol herself—was inspired by West African traditions in which textiles are used as vehicles for narrative or metaphor.

“The West African way of using textiles is never just about aesthetics, which is the case in the Western fashion industry most of the time. A cloth is a cloth, and that’s it. It’s done quick, it’s done without any heart and it’s done in a thousand million pieces,” she says. “In African tradition, there is such a long story inside what’s printed on your textile, and so much symbolism that informs that.”

As an illustrator, she gravitates toward stories that celebrate Black achievement, rather than stories about Black trauma, and that give her the opportunity to work with Black writers. “I’m tired of always going back to the same thematics,” she says. “That’s why I tend to take [commissions] that are more fresh and give a new way of looking at things, and that I feel are actually adding to the conversation.”

Some of the assignments that have excited her most include illustrating a piece by the African American writer Kiese Makeba Laymon in Vanity Fair’s September 2020 issue, which focused on art, activism and power in twenty-first-century America; a feature on the political potential of contemporary jazz for the New York Times; a series of essays on traveling with an African passport for news platform African Arguments; and the cover for a new edition of Mules and Men, Zora Neale Hurston’s book of African American folklore, published by the HarperCollins imprint Amistad.

For art director Stephen Brayda, who commissioned the Mules and Men artwork, Ejaita’s enthusiasm for the project seemed to emanate from her work. “I love how she was able to incorporate a lot of the narrative into a small canvas in a very graphic and simple way. She was very smart about how elements came in and out of the cover... Everything about that felt just spot on,” he says, pointing to Ejaita’s use of color, high contrast and imperfect lines to create a striking linocut effect. “When I see a piece come from an artist, I can tell how passionate they feel about it when it’s just executed so well. Her work was approved right away.”

In African tradition, there is such a long story inside what’s printed on your textile, and so much symbolism that informs that.” —Diana Ejaita

Despite any similarities between her illustration work and her personal projects, Ejaita sees the two worlds as wholly separate. It starts from the process. “With the illustration, I’m very quietly and elegantly seated at my table and there is not much mess. I draw, mostly with pencils, and then there is a big part that’s digital,” she explains. “But with the fine art, my body is involved, my hands are really there and I get dirty. I draw a lot, I use big formats and my studio is a mess afterward—there’s paint everywhere.”

While her personal work is largely black-and-white, her illustrations are deliberately loaded with color—the better to offset a magazine title, contrast with a block of text or establish an “active actor” in a scene, she explains. And while her artworks and WearYourMask collections are given room to develop at their own pace—sustainability-minded, she eschews the traditional fashion calendar—illustration relies on the structure of a brief and deadline. “I don’t want [those worlds] to come together because the fine artwork is so personal and intense—not that illustration isn’t, but it comes from outside, you know? It’s associated with someone else’s text,” she says.

When we speak, Ejaita has two children’s books in development that she’s excited to see published, but admits she’s looking to take on fewer illustration assignments going forward. She speaks excitedly of plans for a two-month artist residency in Burkina Faso, followed by a few months in Angola, if all goes well, and a longer stretch in Nigeria, where she has a solo show planned for July. It’s been a long time since she’s given herself the space to focus on personal projects, where the only stories she’s trying to tell are her own, and the only person she has to answer to is herself. There’ll be no need to monitor her inbox. “I’ve been collecting books to read when I don’t have as much work, because I’ve actually been working seven days a week since November [2019], ten, twelve hours per day,” she says.

“In Burkina Faso, I won’t have much internet, which is a little bit scary at the moment. But maybe it will be a blessing.” ca

Allyssia Alleyne (allyssiaalleyne.com) is a freelance reporter based in London, United Kingdom. A former editor at CNN Style, she covers art, design, technology and culture for publications including British Vogue, WIRED UK and Artsy. In this issue, she profiles Diana Ejaita, a Berlin-based illustrator weaving together silhouettes, pattern and meaning. 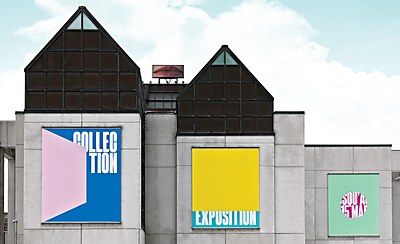 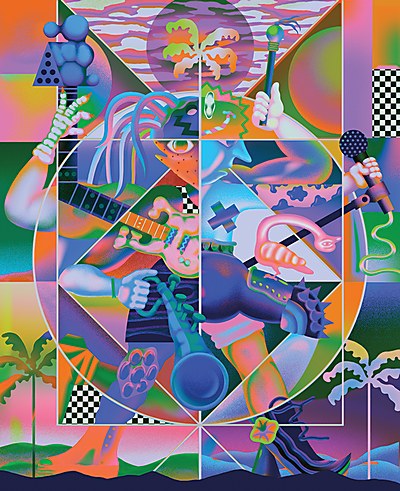