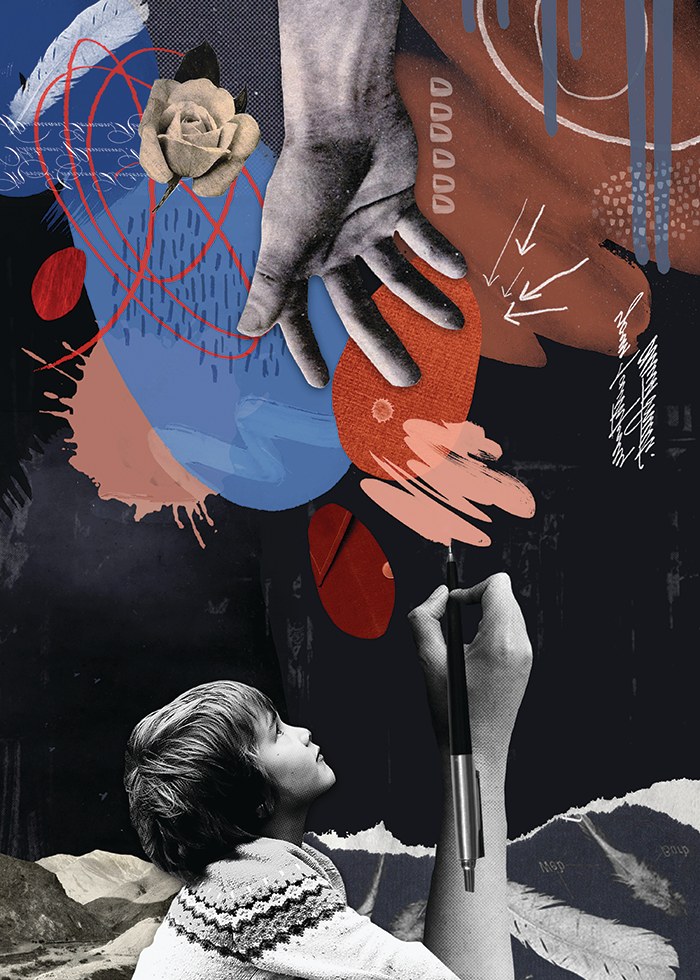 A London-based illustrator specializing in photomontage has pieced together her moral stance and creative skills.

There are years that shape and frame our personal histories. The ones where we go to college. Graduate. Get married. Have a child. Lose a loved one. Then there are years that impact lives around the globe, like 2001, when the 9/11 attacks occurred, and, more recently, 2016, when Britain voted to leave the European Union and the United States voted for Donald Trump. For London-based illustrator Eleanor Shakespeare, 2016 was a momentous year in more ways than one.

"I think it was the worst year in recent human history,” she says. “But, in a situation like that, you can wince and cower and hide, or you can try to do something about it.” What the 27-year-old freelancer did was work on Stormy Seas, a book in which Canadian writer Mary Beth Leatherdale recounts the true stories of five young refugees who fled their homes to escape conflict and terrorism. It was, Shakespeare recalls, “an unbelievable opportunity to work on a topic I care deeply about,” and it offered her a way to deal with the madness of that year’s events.

The timely project brought together the things Shakespeare has always been interested in, in a life and career that have been deeply shaped by her belief systems, moral stance and compassionate, empathetic upbringing. She was raised in a colorful household in what, she says, “was a childhood filled with good chaos...a culture of making and doing that was busy and loud.” This was due in no small part to the history of creativity in her family and her parents’ backgrounds in art, therapy, writing and teaching—often in unconventional places like prisons. It was a mix that has created “a lifelong link between creativity and therapy” for her, she says.

Her political and social engagement come from her family too, she says. “We’d have very intense discussions about moral and spiritual issues as well as political debates,”she recalls. And, at school, she remembers loving creative subjects. “The flow and rhythm of handwriting was some-
thing I particularly loved,” she says. Given this background, a creative path was almost inevitable, and she took to it with enthusiasm. In her second year of an illustration degree at the University of the West of England, she settled on photomontage as a medium she wanted to work with. Six years on, it has become a clearly defined style for her in a career that has seen her produce illustrations for national newspapers, like the United Kingdom’s Guardian and Canada’s Globe and Mail, as well as such prestigious titles as The Washington Post, Time, the Atlantic and Vanity Fair. There have been three books too, two of which, Collage and Keep and Cut, Paste, Create, are accessible creative exercise books that satisfy Shakespeare’s desire to facilitate and unlock creativity in others. 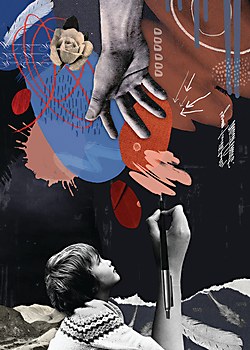 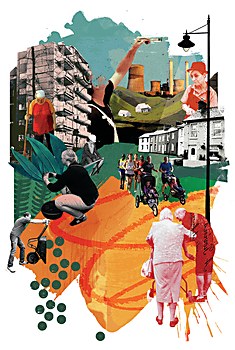 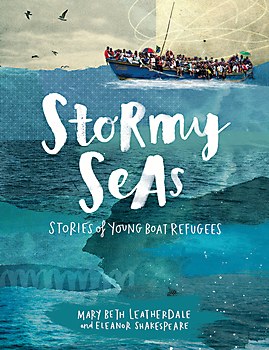 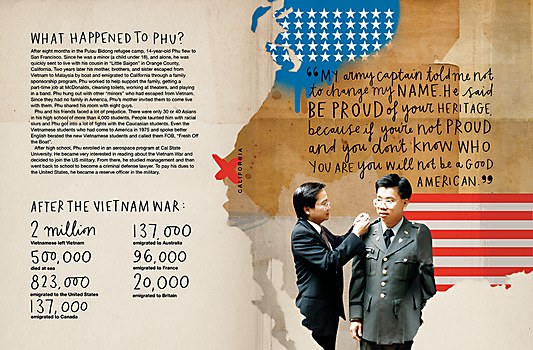 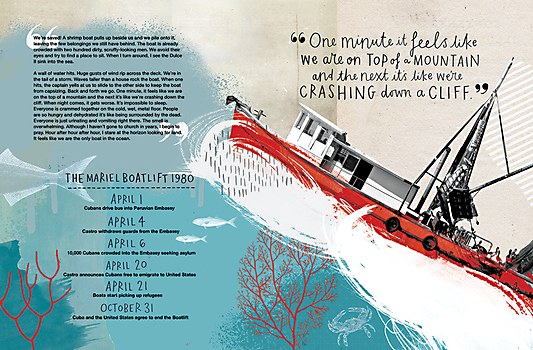 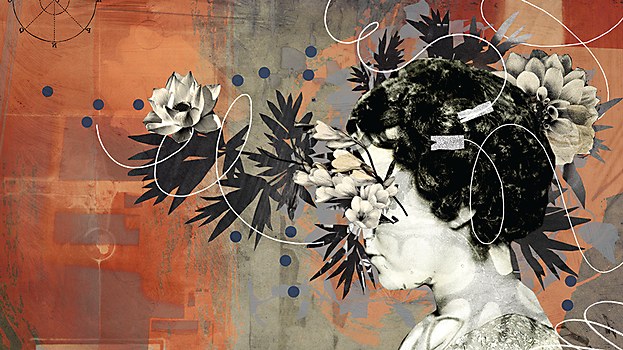 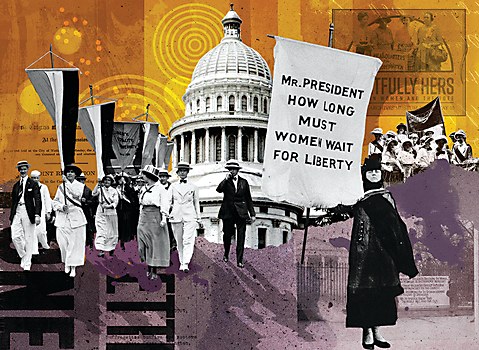 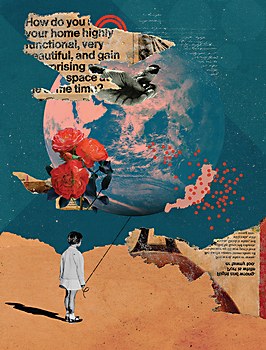 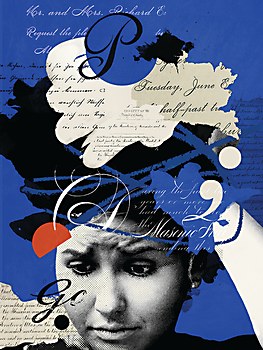 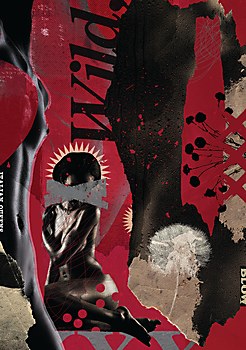 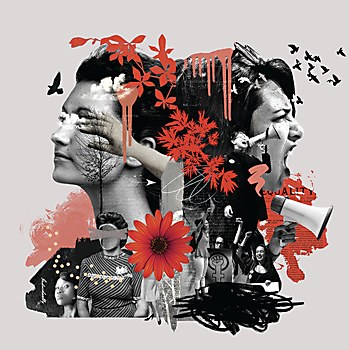 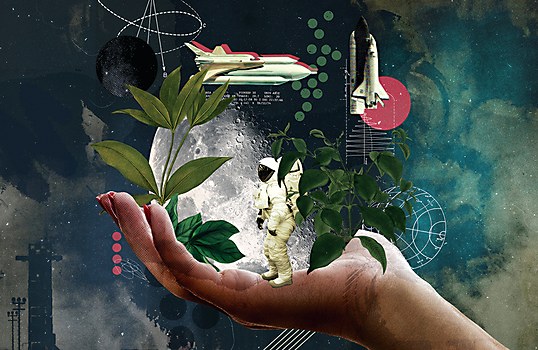 Photomontage is an accessible medium that has been used by politically and socially engaged artists for almost a century, from the overtly antiwar art of John Heartfield and Peter Kennard to the left-field messages of Dadaists such as Hannah Höch and Kurt Schwitters. Like her forebears, Shakespeare has found that the multilayered, nuanced mix of ephemera, bold colors, text, hand-drawn type, archival photography, and handmade and found textures lends itself perfectly to meaty subjects. Hers are as varied as they are rich in substance, illustrating politics and society at all levels—everything from the US justice system and Putin’s Russia to how real people have made social improvements at the community level. “Photomontage has the versatility, depth and subtlety to illustrate these really diverse subjects. There’s something spontaneous about it,” says Shakespeare.

Whatever the project, Shakespeare’s working process is the same. Increasingly, clients provide a range of archival photos specific to the subject, which she digitally layers and collages with her own material. “I have a huge archive, in different folders, of textures. I make some; others are found and scanned. I normally cut out the photography first, then start dragging, moving and layering. I love it when clients provide historical archive material, and ideally not too many images,” she says. “Maybe that’s the joy of working in this way—the restrictions. Time restrictions, archive restrictions, brief restrictions, client restrictions…parameters contain what I’m doing in a positive way.” Chris Clarke, deputy creative director at Guardian News & Media, says, “She reallyinterrogates a subject, and often challenges myself and the editor with an unexpected approach. She’s also a very strong communicator. She’s able to paint a vivid picture to editors with how she describes her roughs, which is remarkably helpful when dealing with people who may not have the same creative grasp as yourself, but do understand the nuance within language.”

Photomontage has the versatility, depth and subtlety to illustrate these really diverse subjects. There’s something spontaneous about it.”

The bulk of Shakespeare’s work is illustrating editorial stories she clearly cares about, and she has admirable integrity when deciding what to work on and who to work with. “I’m quite principled. I’ll turn down work if the content is very far removed from what I believe is right, or walk away if there’s something offensive or distasteful in the content. But I’ll also turn down work if the fee’s too low, which is about making people recognize the value of what [illustrators] do; both come with confidence born of years of study and experience,” she says. That experience means she understands the need to go beyond creative skill. “You can be the most fantastic, imaginative image maker, but that’s just 50 percent of this job. The other 50 percent is being reliable, delivering on time and being in tune with what’s going on in the world around you,” she says. Unsurprisingly, such a mature approach makes her highly regarded by her commissioning editors, including Clarke, who says, “There are many factors that make her work special, but for me personally, there’s a real charm to how she treats the imagery she works with. Her combination of live news imagery with lateral conceptual ideas is what really helps cement her style. There is genuine passion in subjects she feels personally connected to, and you can really feel that empathy at every stage of the commission. But on top of that, she really understands the editorial pressures we’re under, and is very responsive and accommodating as stories develop.”

Though Shakespeare’s work may seem like the stuff of dreams, she sounds a warning bell. “Obviously, there are times when projects are boring or rubbish, and often, it’s really lonely. It’s easy to paint a picture of massive happiness because illustration is the absolute perfect job for me, but it also goes strongly against my nature. I love to engage and be around people in a supportive, encouraging environment, and this job just does not allow for that.” She has found coping mechanisms, which include being artist in residence at her old high school, where she helps students put together college portfolios. And working with Leatherdale on Stormy Seas was a highlight of her career, not only because of the subject matter but also because of the experience of working with someone else during a dark time. Leatherdale remembers that “during the development of the book, we weathered the Brexit vote and the 2016 US election. We were both reeling from the raging anti-immigrant rhetoric, heartbroken by the refugee crisis, alarmed by the growing nationalism around the world. For both of us, creating the book was a way to fight back, to take action in our own small way.”

But one area that freelancers often find solace in—the personal project—leaves Shakespeare struggling. “I find the space intimidating,” she says simply. “I need a stimulus to respond to. And really, what do I have to say that I’m not already saying? I feel really sustained and fulfilled in what
I do, so I don’t necessarily have that creative urge. Having said that, I do respond to big events where I want to add something to the conversation. I often create a piece of work for International Women’s Day and Mental Health Awareness Week; I did something when David Bowie died, when the London Bridge attacks happened. I think I need that external prompt to come from somewhere,” she says.

If there’s one thing I hope about my career, it’s that I can change the hearts of people who’ve been hardened about issues that really matter.”

Though, she admits to feeling the need for change, with perhaps a shift into some advertising and design work. “I like the idea of the challenge. I love editorial work and it will always be my first port of call, but different contexts present different challenges. You approach things in a different way. With Stormy Seas, for example, I learned a lot about text use and placement, and putting those elements together in ways that don’t interrupt each other but sit on a page comfortably together. It taught me that when you’re having to draw out a story and paint a picture of someone’s life, it’s quite hard to maintain the powerful, hard-hitting visual language I use in illustrating an article. I’m also currently creating some meeting-room murals for the Times newspaper offices in London, which are huge, literally huge, and that’s exciting for me because the scale is so different,” she says. “I’d love to work more for charities—that would be really great. I’d love to do design work that promotes events or campaigns that target specific areas of interest, and projects that tackle humanitarian issues.”

“I have not by any means got all of this figured out,” she says. “But I think with every job, there is an opportunity to do something for others and to use our skills for good. If there’s one thing I hope about my career, it’s that I can change the hearts of people who’ve been hardened about issues that really matter.” Whatever Shakespeare turns her attention to, you can’t help feeling that her empathy and optimism will continue to drive her. As Leatherdale says, “The depth, beauty and humanity of her work always leaves me feeling a little more hopeful.” ca 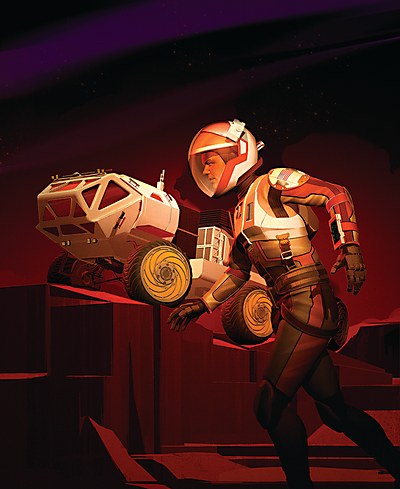 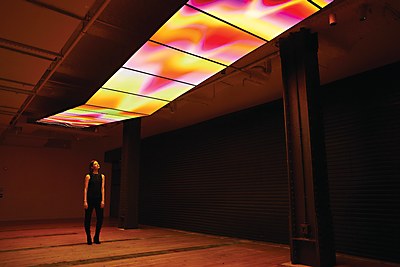 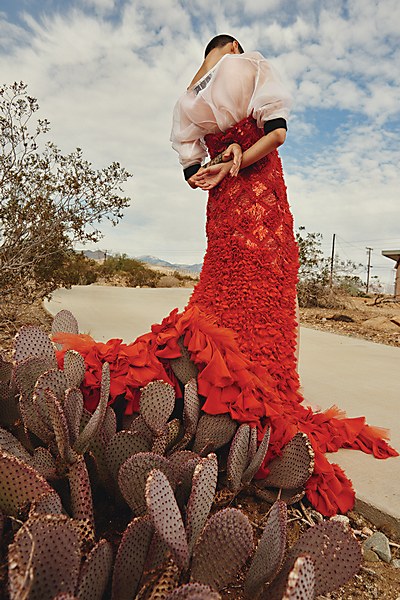