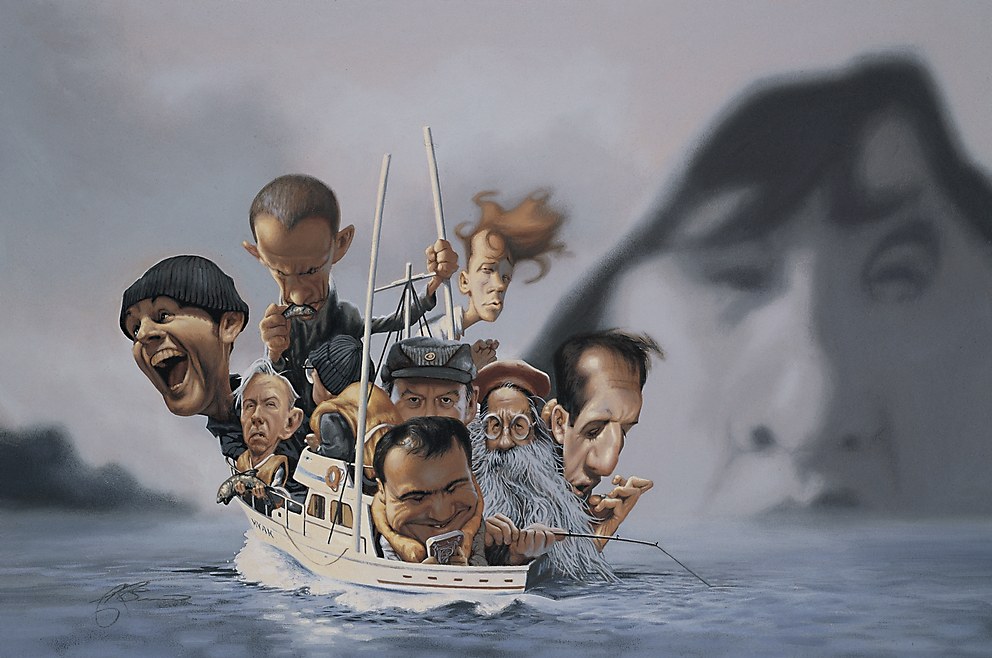 For this Pipersville, Pennsylvania, illustrator, the eyes say it all. 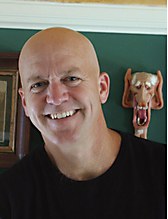 Everyone has a story to tell, and for most it is written all over their faces. The tales that unfold behind the mask that we all wear fascinates and intrigues illustrator James Bennett, inspiring him to paint his satirical, yet good-natured, visual commentaries. Like a good casting director, he seeks out a variety of personalities to enliven his often cynical plots. Whether Bennett is strolling the mall, walking the beach or enjoying a ball game, he is always observing. “I am a notorious people watcher and am completely fascinated by just watching,” admits the artist. “I am especially drawn to facial features. What amazes me the most about a face is that it alone can tell a lot about what kind of life a person has led. For instance, I’ll see a guy walking down the street and I picture what he does for a living, the name of his dog and the car he drives. It’s all in the eyes.” A true connoisseur at identifying the innate mannerisms and distinct physical peculiarities that make an individual unique, Bennett truly reigns in the genre of humorous illustration.

Whether he is working on a single portrait or a complex scene, Bennett always looks for a different angle or point-of-view, something that will make his work stand apart from the competition. “I like to have an opinion in my work,” acknowledges Bennett. “Dealing with exaggeration, I can really play up on how I personally see or interpret things. At this stage in my career, it is interesting because I get a chance to see how much I can exaggerate and then bring it back to a reality where people think there is almost no exaggeration at all.” To assist him in capturing a certain realism and believability, Bennett finds reference a necessity. When it comes to getting just the right facial expressions on his highly animated cast of characters, the artist is quite resourceful with a digital camera; snapping shots of himself, his wife Susan, his sons Steven and Brett and even his dog Piper, a mixed breed with a really great face. If you look closely at any of Bennett’s illustrations, you will see subtle resemblances to the Bennett family throughout. The age, ethnicity and hairlines altered, of course. Friends, neighbors and colleagues have also made their way into Bennett’s zany scenarios. Inspired by the brilliant chiaroscuro and short depth-of-field of vintage black-and-white photography, the artist employs these dramatic effects in his own work to create a hyper-realistic spin on his imaginative, idiosyncratic caricatures. 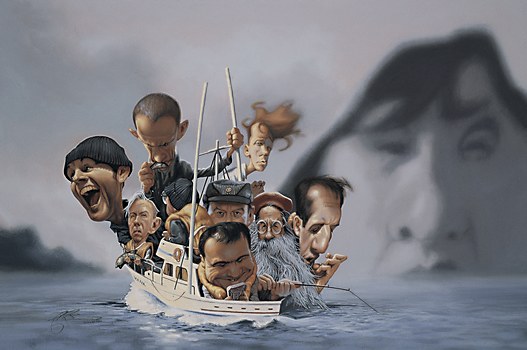 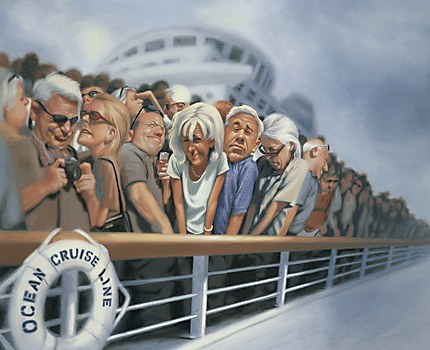 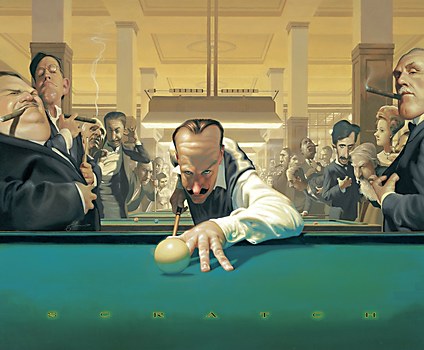 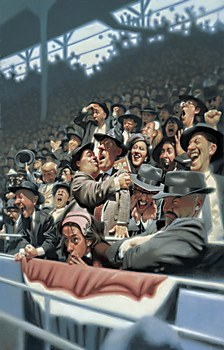 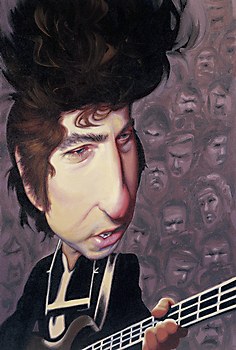 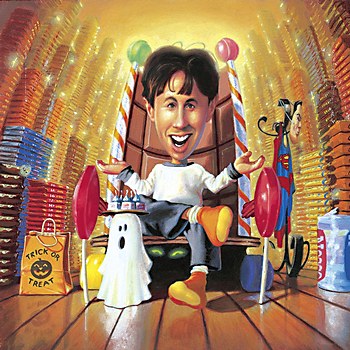 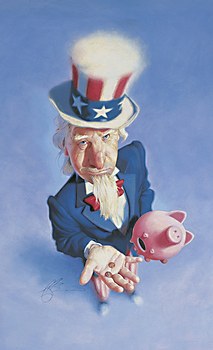 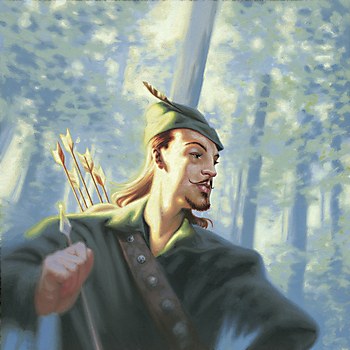 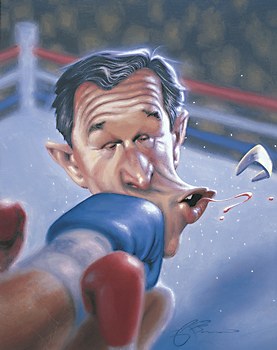 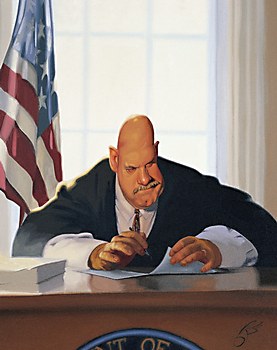 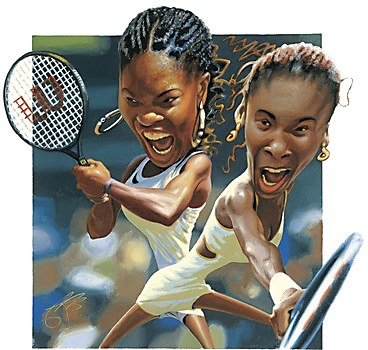 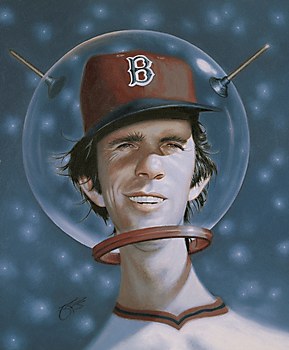 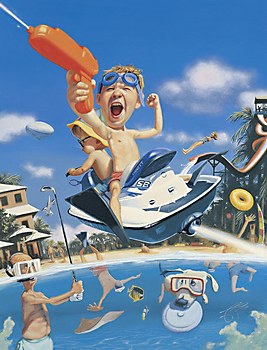 Providing hints of what has passed and what is yet to come, Bennett’s images are much more storytelling in nature rather than mere slice-of-life scenes. “I am always trying to figure out in one image how I can suggest much more than what is seen. For instance, the ball game crowd in the piece titled The Kiss is probably the best example of how I show before and after moments in my work,” details the artist. “I imagined that it was the last inning of a back-and-forth struggle that had suddenly turned for the better or worse, depending on which team one was rooting for. Immediately after the moment, the two men in the center become slightly embarrassed after their public display of affection, which can only occur in this type of venue. Spending so much of my life at ball games, I really envisioned the scene as the quintessential moment of not only this particular game, but of the entire season.”

Evolving out of a marriage between the highly representational painting style he learned in school and the freeform spontaneity of his caricature work that filled his early sketch-books, Bennett’s signature style has been present since the beginning. “In 1985, my last year at SVA (School of Visual Arts), I came up with this idea of taking the painting process that I knew from studying the old masters and applying it to the caricatures I was doing. At the time, I knew I needed a style, so I made a conscious decision to put the two ways of working together,” recalls Bennett. “In the beginning, there were a lot of hits and misses but the challenge has kept me intrigued and interested. Twenty-one years later, the only thing that has changed is that I have a much better feel of how to control the comedy in my work. I no longer feel that I have to get a laugh out of everything. Now when I use humor, I am only after subtle chuckles as opposed to slapstick that hits you between the eyes.” Bennett’s biggest break-through came when he started working with his agent Richard Solomon after ten years of flying solo. “I started with Richard in 1995 and it was amazing to me to even be in a league with such great artists,” remarks Bennett. “Having my name next to John Collier, Mark Summers, Gary Kelley and Chris Payne not only helped me get new clients and bigger exposure, but also forced me to take my work more seriously, aspiring to belong to that group.” At the time, there was also a lot going on in Bennett’s personal life that kept him focused and driven. “I was newly married, expecting my first son and had just bought my first house,” he adds. “It was pedal to the metal time!”
I have been so incredibly lucky with the types of clients I’ve had and am constantly amused and inspired by the jobs that I get."


For Bennett, each working day always begins by completing the daily crossword puzzle. “It’s a ritual that I must do,” admits the artist. “The day just can’t start unless I complete the crossword.” Up at 7:30 a.m. and working by 9:00 a.m., Bennett usually has a number of different jobs going on at once. He works until about 5:00 p.m. or 6:00 p.m. during the week with weekends off to spend with his family. This wasn’t always the case, especially early on when pulling all-nighters was a weekly routine. Whether he is playing hockey with his kids or attending one of their baseball games, Bennett enjoys his active life-style, something that he has found to be a blessing especially when his illustration work keeps him sitting down for most of the day. “Now that my sons are older, they’re my buddies,” says Bennett. “They share my passion for sports and keep me young.”

Juggling family life and a busy career has taught Bennett to become streamlined in his process. His straightforward approach includes: nailing the drawing and overall composition in ballpoint pen, blowing the sketch up on a copier, and transferring it to unprimed two-ply illustration board or inch thick gesso-primed oak board for larger works. He does the entire underpainting in one session, using Liquin and a mono-chromatic palette consisting of Naples yellow, brown madder alizarin, indigo and white—a color scheme quite reminiscent of the old hand-colored photography he loves. By the next day, the underpainting is dry and the artist goes in and refines the details by glazing. These days Bennett finds that less is just more. “Ten to fifteen years ago, I definitely was a lot tighter and I used off-the-chart bright colors,” he adds. “Now I am a lot looser and use color in just the areas of focus.” The Pennsylvania-based artist works out of his home, an old farmhouse in Pipersville that he has taken great pride in renovating.
Dealing with exaggeration, I can really play up on how I personally see or interpret things. At this stage in my career, it is interesting because I get a chance to see how much I can exaggerate and then bring it back to a reality where people think there is almost no exaggeration at all.”


Working in a plethora of markets from editorial and book publishing to advertising and institutional, Bennett is never bored. His impressive client roster includes Time, Sports Illustrated, Mad, the Wall Street Journal, Golf Digest, Major League Baseball, Paramount Pictures and Hasbro Inc., just to name a few. Bennett has also illustrated several children’s books including Tell Me a Scary Story...But Not Too Scary, written by entertainer Carl Reiner, and Halloween, written by comedian Jerry Seinfeld. Both books, published by Little, Brown & Company, have been on the New York Times best seller list. To round off his offerings, the prolific artist has also been penetrating the collectibles market, producing art for limited-edition prints. “I wanted to create work that people would want to hang on their walls,” says Bennett. “What I came up with was a series of images for gaming rooms.

At the time, I was creating one in my own house and needed a piece to hang next to my pool table.” Scratch, the first piece in the series, not only launched a new avenue for Bennett’s work but also won him the Hamilton King award from the Society of Illustrators in New York City. Other accolades include the Stevan Dohanos award and two gold medals from the Society of Illustrators. When it comes to future endeavors, Bennett has a few other tricks up his sleeve and plans on producing work for digital reproduction of large-scale murals to be used in corporate, institutional and public spaces.

For Bennett, the variety and breadth of assignments has made each day an adventure. “I have been so incredibly lucky with the types of clients I’ve had and am constantly amused and inspired by the jobs that I get,” shares the artist. “My career has really been enjoyable and I am always on the lookout for the next challenge.” Making the decision early on to paint what he really loves has truly paid off. “I always advise students to illustrate what it is that they enjoy the most because they will ultimately put all of their energy and enthusiasm into it,” concludes Bennett. “It is also important to never feel too influenced by what others tell you that you should do or worry about what you think you’ll be able to make money at, instead, listen to your heart and enjoy the ride along the way!” ca

Lisa L. Cyr is an accomplished author and multidisciplinary artist with a content-driven focus. Her books, Innovative Promotions That Work, The Art of Promotion, The Little Book of Big Promotions, Brochure Design That Works and Graphic Design That Works (Rockport Publishers), feature top national and international promotional work with sidebars that go beyond the basics to explore strategic and innovative thinking. A graduate from The Massachusetts College of Art (BFA) and Syracuse University (MA), Cyr’s artistic oeuvre has been exhibited both nationally and internationally in museums, galleries and universities. Her work is also included in the permanent collection of the Museum of American Illustration as well as private collections. She is an artist member of the Society of Illustrators in New York City and works in partnership with her husband Christopher Short, painter and 3-D illustrator. 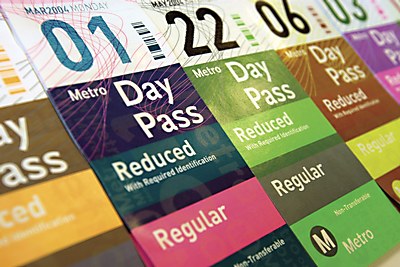 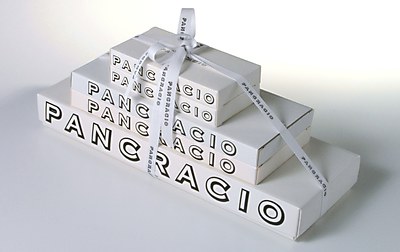 Features / Design
Packaging Design on the Frontline
A range of projects from design's most visible discipline. 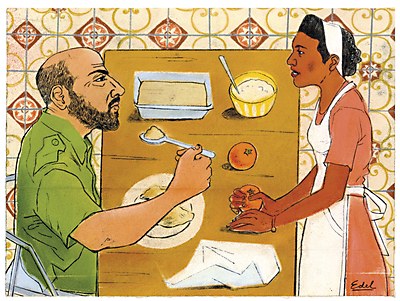