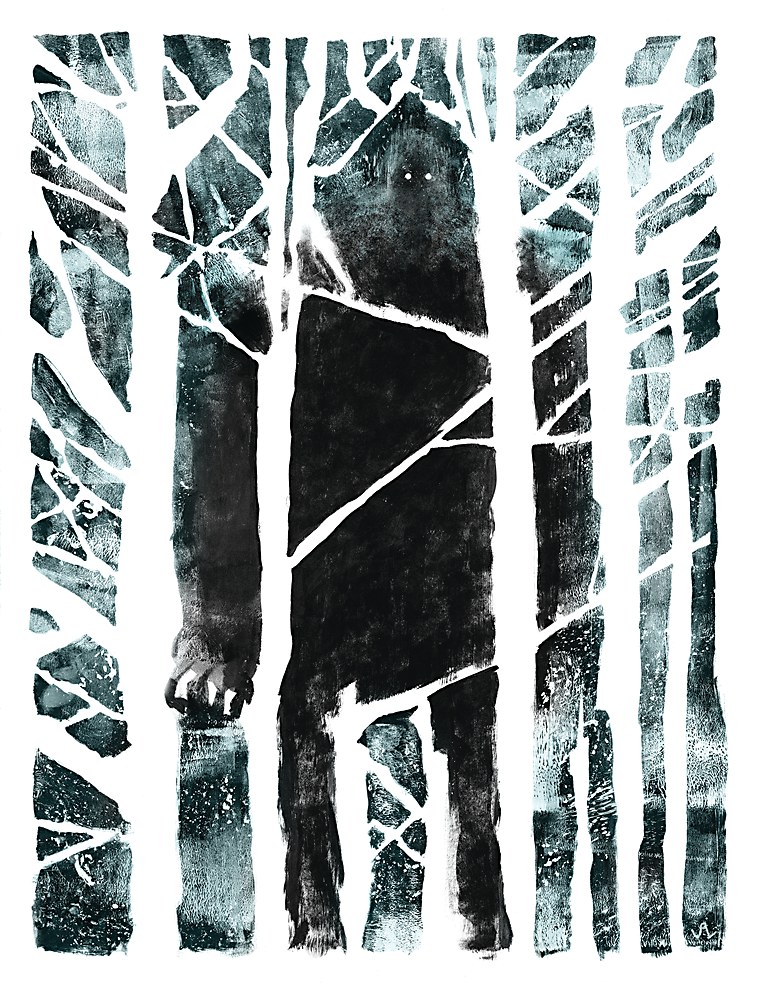 Once silhouettes have sprung from this St. Louis illustrator’s mind and landed on the page, there’s no looking away.

The question struck Jeffrey Alan Love in the midst of a dry spell—not in terms of work, which he was getting plenty of at the time, but in terms of passion. Love’s was wearing thin.

Not so long before that, Love had dreamed of making art for a living. After creating a fledgling illustration portfolio from assignment prompts he had found from art director SooJin Buzelli, Love sent out mailers and emails like clockwork.

A month after he landed his first “real” assignment with The Progressive magazine, he began making enough money to quit his job at an art supply store. His whole career stretched before him.

And yet, “I wasn’t happy doing the stuff I was doing,” says Love, who had been freelancing while working as an adjunct instructor at Virginia Commonwealth University (VCU) in Richmond. “There’s a type of cancer that runs in my family, so it was recommended that I get tested for it. The first tests were bad; I had to have all these cameras shoved in me, and I was just scared for a month. ... You think you have all this time and that life will go on forever, and then life looks down on you and says, ‘Think again.’” 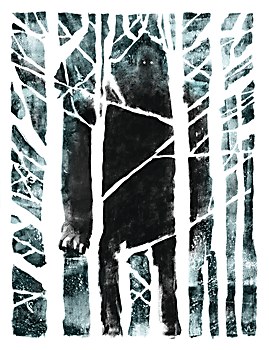 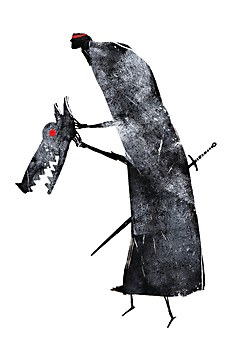 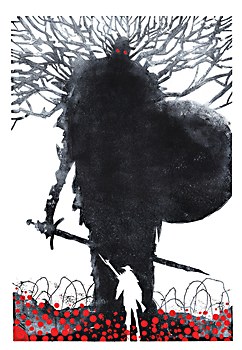 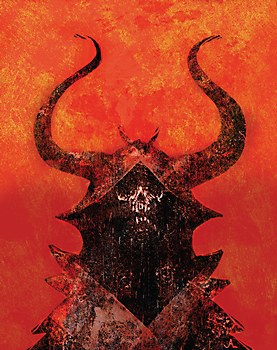 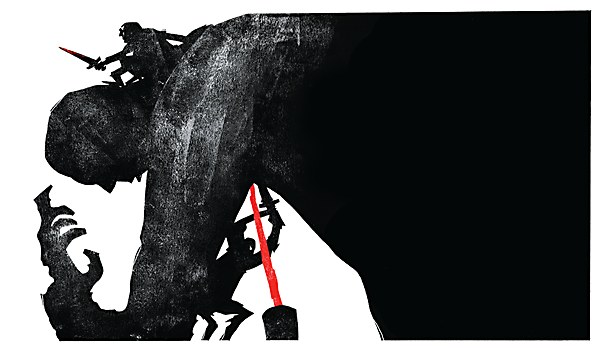 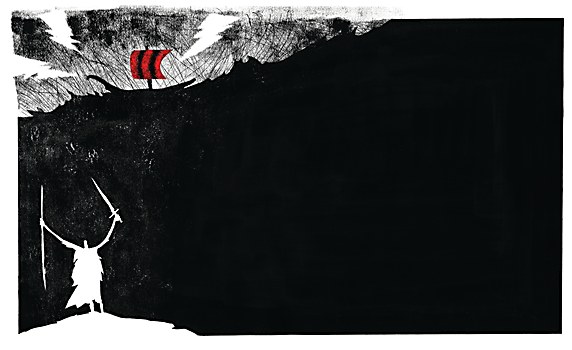 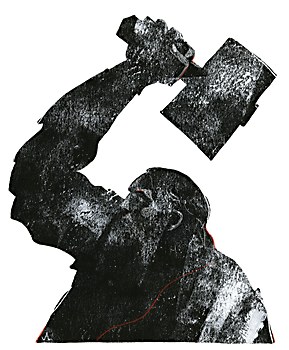 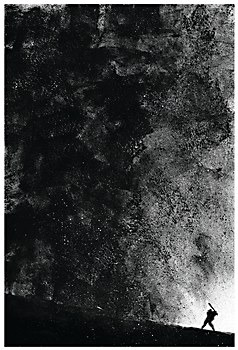 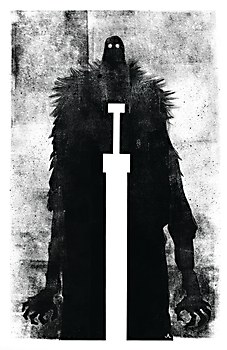 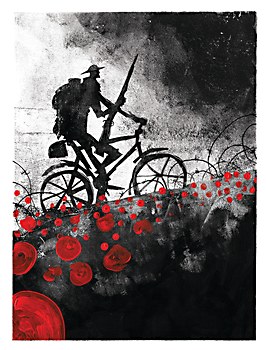 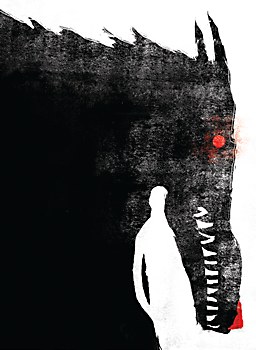 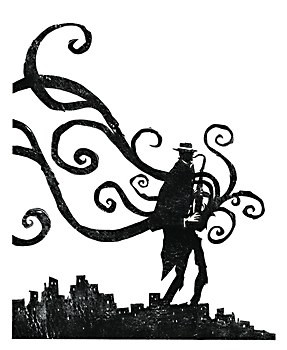 FROM THE BEGINNING
Here is what Love has done: Illustrations for the likes of The New Yorker and the online science fiction and fantasy magazine Tor.com. An award-winning—and his first-ever—book cover for Wolves, Simon Ings’s 2014 work of science fiction. More than 100 paintings for author Kevin Crossley-Holland’s Norse Myths: Tales of Odin, Thor and Loki, out next month. And, of course, the sketches he’s posted to his Instagram account, which has attracted 65 thousand followers.

Although Love’s career started just five or six years ago, the pearls he’s strung onto it began forming in his childhood. “I had a hard time making friends, little nerdy kid with glasses,” he says with a laugh, touching his black glasses, “always feeling like an outsider, and moving to Germany or South Korea and not knowing the languages, so that barrier became even greater.” He ticks off the places he’s lived: Germany, Texas, Germany again, North Carolina, Nebraska, South Korea, Hawai‘i, Colorado, Florida... “and on and on and on,” he finishes.

It’s his stories of Germany that later compel me to look up images of Winnweiler, the village where he, his younger brother and his parents once lived. On Fridays, they ate schnitzel and played UNO at the hotel down the block. During the weekends, they explored the surrounding woodlands and farmlands on volksmarches, or organized fitness walks. And it’s in Germany that Love first laid eyes on the Victor Ambrus– illustrated Tales of King Arthur book. “For someone who was very much a bookworm and lived in sort of a magical, make-believe world in their head, it was perfect,” Love explains. “I’d be running around pretending to be Robin Hood or King Arthur or whoever, and there are castles everywhere, so you didn’t have to imagine very hard to pretend that you were there.”

Although he spent his twenties working toward a “brain degree” in filmmaking, then creative writing, at Colorado College and touring with his college band, National Eye, art always simmered on the backburner. So when his wife and college sweetheart, Gwyneth, went to medical school in Virginia, Love followed suit. “I wanted to go to VCU to study with George Pratt, who’s a comic book artist and illustrator,” says Love. “And of course the year that I got there, he had just left to go teach at Ringling College of Art and Design. So perfect timing.”

Instead, Love met his future mentor, Sterling Hundley. When he attended the Illustration Academy that summer in 2008, he filled his toolbox with the essentials of making art: value, shape, edges and the knowledge that clients hire you for your brain rather than your wrist. But Love needed to mangle a few nails before he could actually make use of any of this knowledge. And it wasn’t just his career that he was building anew: after completing the Illustration Academy at age 30 and dropping out of VCU, Love was divorced, working at a grocery store and sleeping in his car.

“Making a living as an artist was ... not even a dream at that point,” says Love. Still, he painted and drew—sometimes in his car, other times in coffee shops—and snuck into Hundley’s office hours at VCU. When he began working as Hundley’s apprentice, he logged five days at the art supply store and two days with Hundley. What little time he had left, he spent on his own work. It took years before he realized, “I can’t keep delaying any longer.”

It sounds stupid, and I can’t believe it took me so long to figure this out: white paint doesn’t show up on white paper. That’s it. It’s like, well, obviously.”

These were the thoughts initially pressed into his head: “‘I should learn how to draw classically and build up value with pencil and do all these studies, and then I should do an oil,’” he recalls. But “by an hour into [the painting], I’m hating myself and my life. You have to be true to your temperament, your personality—so for me, I liked to work quickly. I loved graphic design stuff; I liked strong shapes ... how can I bring that sort of visceral design feeling into my work? But also, how can I have it not just be like I’m cutting out construction paper and pasting it on there?”

Love found the answer while illustrating Bigfoot for Nautilus magazine. “It sounds stupid, and I can’t believe it took me so long to figure this out: white paint doesn’t show up on white paper,” he says. “That’s it. It’s like, well, obviously. But for some reason on that piece, it made sense to me. That’s sort of dictated everything I’ve done since.” By adding texture to his silhouettes, he’s found a way to “[paint] light onto the object.”

To do so, Love uses everything from house-painting rollers to smooth sticks scavenged on the beach. For personal pieces, Love goes in directly with paint and ink; but for client work, he sketches in Photoshop. “Once I have the composition, I’m on easy street,” he says. “If the composition is worked out, and you can tell what it is, you can get away with murder texturewise and mediawise within the actual piece.”

When it comes to color, Love keeps it classic: black, white and the occasional pop of red. “Nowadays with Photoshop, everybody can paint with every single color ever invented, and they often do. So to stand out, why not limit yourself?” Also, it’s savvy time management. “If you make 99 percent of the piece black, how fast is that gonna be? Like, shoo shoo shoo, and then one little bit of paint and you’re done. It took you fifteen minutes. I’m attracted to sparseness in design; also, it’s pretty smart deadlinewise.” His dream is to paint a black square for a client brief, which he got pretty close to in a cover for Johns Hopkins Magazine.

Although he’s whittled his process down to fit magazine deadlines, these days he only spends about five percent of his workload on editorial illustrations. “Now I work on book covers, where the deadline is a month or two away,” he says. “So I’m given space to work on my own things.”

It all ties back to that month when cancer threatened to swallow Love whole. Instead, it did quite the opposite. “I just said, ‘I’m going to stop doing the editorial stuff that I don’t like to do. I don’t care if I have to go back and get a regular job, a 40-hour-a-week job. I’d rather make art that is meaningful and never get paid for it again than to keep doing this,’” Love recalls. “So I just made a bunch of paintings over that month, and [my test] was a false positive.”

Once I have the composition, I’m on easy street. If the composition is worked out, and you can tell what it is, you can get away with murder texturewise and mediawise within the actual piece.”

Today Love says, “I can write it and paint it myself so I get to do these dream projects instead of spending my career hoping they come along.” Notes from the Shadowed City, which he published through Flesk Publications in 2016, certainly qualifies. Not quite a comic book, not quite an illustrated book, “it’s like this weird, different thing.”

Notes is neatly summed up by its first line: “I cannot remember my name or how I came to be in this place.” Written in the point of view of an amnesiac wandering across a strange land, the book first took form when Love broke his foot. Chair-ridden, he filled his sketchbooks with this and that, both images and words. “It was 80 percent dreaming,” Love says. The last 20 percent, which he describes as having to wake up, entailed “a big corkboard, like the Breaking Bad writers room” to fill in plot gaps. The resulting images recall textured Rorschach inkblots. And as you map the rocky terrains of the horned warriors, sprawling trees and sharpened swords that have bubbled up from Love’s youth to rest, again and again, throughout Notes, you feel as if you might just stumble into the cradle of his journey as an artist.

FROM NOW ON, ONLY LOVE
It is, from Love’s perspective in St. Louis, Missouri, a summer afternoon. Earlier, he had given me a tour of his studio as gracefully as one can through Skype, showing me the table where he writes from 9 a.m. to 11 a.m. He pointed out his seven-foot-long, hundred-year-old drafting table and described his giant Epson scanner. In the corner, he said, were a pair of very hungry cats, Biscuit and Pie, and off to the side, the entrance to the kitchen, from which his son, Arthur—born not long after he and Gwyneth remarried three years ago—streaks in. “There’s a lot of herding that goes on,” he said.

It’s getting late. Love tells me that he’s writing his own novel, comic book and children’s book, and he’s looking forward to teaching at the Illustration Academy, as he has been doing for the past few summers. But all of that can wait: it’s time to pick up Arthur from daycare. ca

Esther Oh (esthero@commarts.com) is the managing editor of Communication Arts. Based in the San Francisco Bay Area, she graduated from Stanford University with a degree in sociology. 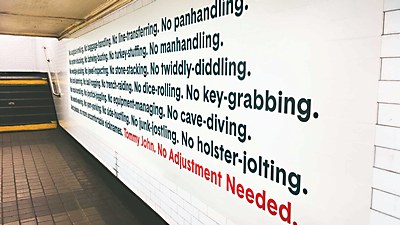 Features / Advertising
Preacher
Brands flock to this Austin, Texas, agency for campaigns that keep the scriptures of powerful advertising. 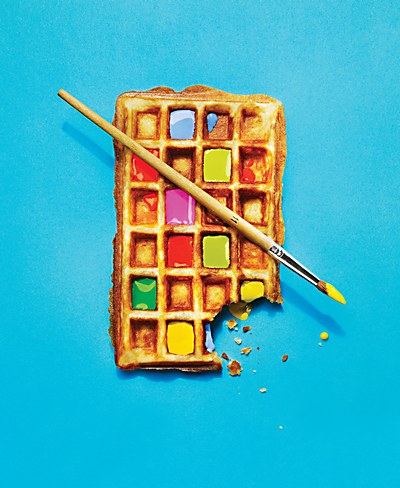 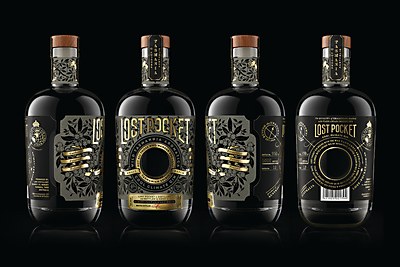