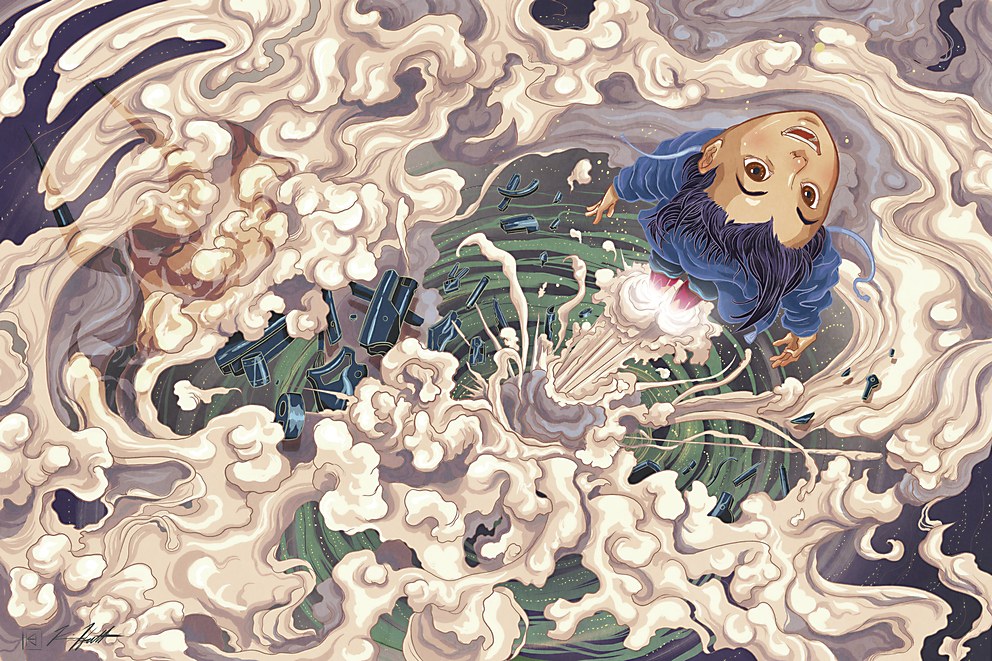 This San Francisco-based artist infuses her illustrations with rich atmospheres and fantastic elements.

By the time Kim Herbst was four, she knew. The rush of color, the motion and the flash in her favorite cartoon Sailor Moon had captured her attention like nothing else, ever. She had to be part of it. What could be more inspiring to a preschool illustrator than a superheroine and a talking cat?

The Herbst family was living in Tokyo when Kim first realized cartoons are adventures that artists can draw. But even better, she understood that drawing is doodling, and Herbst was an avid doodler. After two years, when her family returned to the United States for her father’s post at the Federal Reserve, she recognized something else: Japanese cartoons like Sailor Moon and Dragon Ball were light-years ahead of American shows. “Japanese animations had more frames, better color combinations and flashing light effects,” she says. “Very fun for a kid. I wanted to make stuff like that.”

Today, comics are as vital to her art as when she copied characters off video boxes at Blockbuster. Herbst’s motto is, simply, “just keep drawing,” and that tenacity has paid off after years of trying to merge her personal and commercial work. A Herbst drawing embeds fantasy with an atmosphere of rich tones, reflections and shadows. She renders her characters—sometimes pretty and sometimes pretty scary—with vivid color blends and rim lighting that make their details pop. Above all, her flowing lines, swirls and motion add fluidity to her gaming and publishing projects.

“I found Kim by luck on hireanillustrator.com,” says Amy Noonan née Heidemann, winner of Rolling Stone’s 2012 Women Who Rock contest. The singer in the American pop duo Karmin asked Herbst to illustrate a zodiac-themed adventure series for the band’s new album, Leo Rising. “We were looking to connect the creative dots with an artist who could tell the story that accompanies the music and capture its feeling,” she says. “Kim’s aesthetic is that of my imagination. She was our top choice.”

Partial to drawing women, cute animals and monsters, Herbst has expanded her content and injected more energy into her editorial work by mixing illustration and animation. When the nonprofit initiative SPIRE CoLab, a partner-ship between the Sarasota Herald-Tribune and the Patterson Foundation, commissioned Herbst for a back-to-school image about sharing, she drew students helping each other climb a path made of school supplies. As they climb, leaves flutter and fall. Refreshing in its simplicity, the animation provides “something exciting to see as you’re reading the article,” she says, “like a breath of peace.” 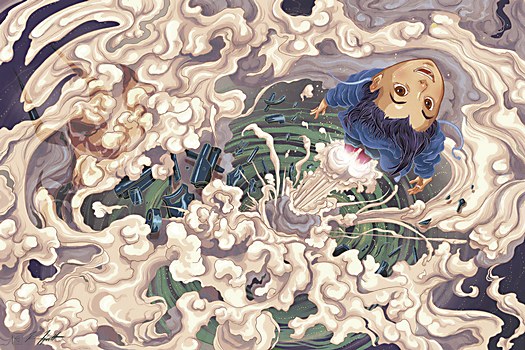 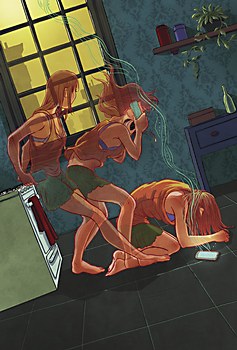 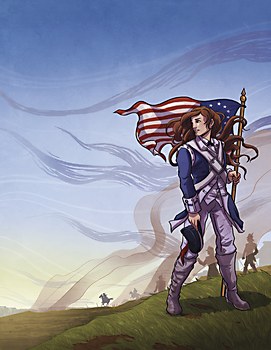 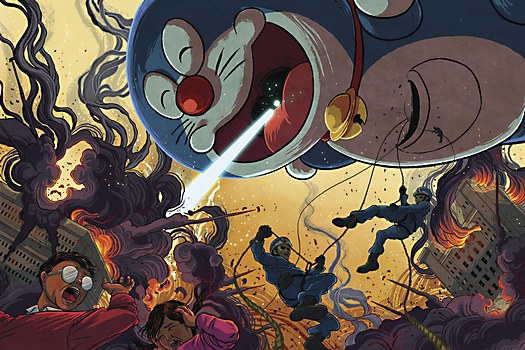 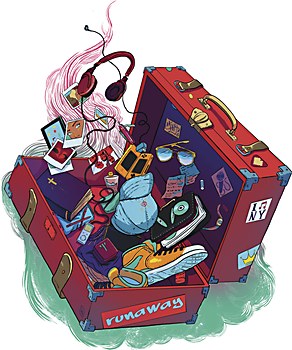 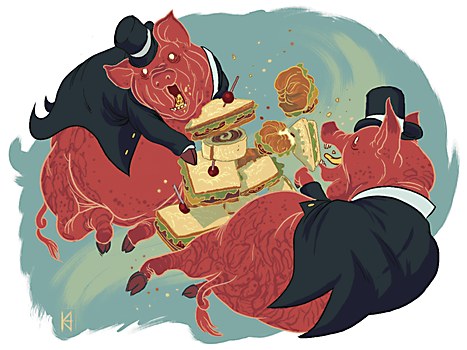 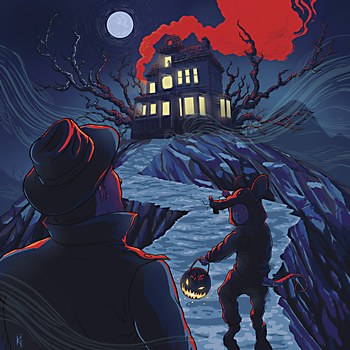 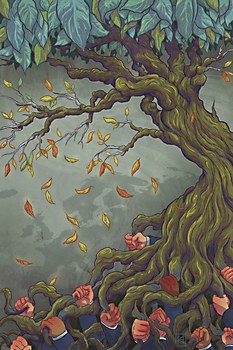 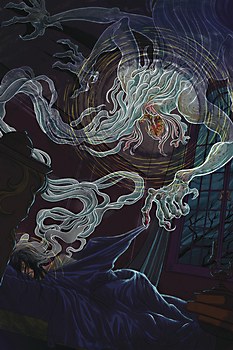 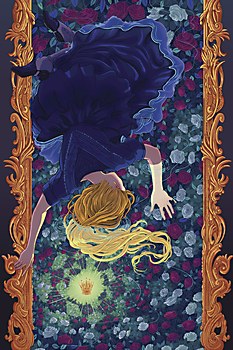 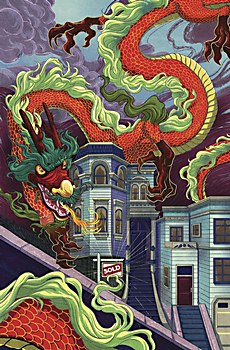 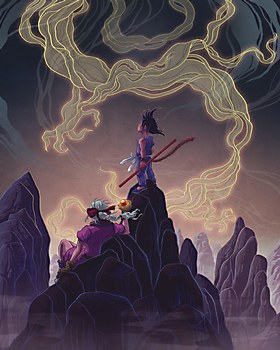 Kate Thomas, cofounder and editor of literary fiction magazine Sixpenny, commented on Herbst’s “obvious intelligence” when it comes to interpreting material. “Our readers always go out of their way to respond to her work,” she says. “She’s incredibly versatile and able to meet tone while still maintaining her own style. Kim’s work gives instant credibility to any text it accompanies.”

The rigor of editorial work had a steep learning curve, but Herbst learned to balance accuracy with engaging design. Kathi Gulotta, senior acquisitions specialist for Houghton Mifflin Harcourt, commissioned Herbst to illustrate “The Story of Shi Jin,” about a Robin Hood–type character from the classical Chinese novel Water Margin. “Our team chooses artists who can create exciting, contemporary art with an edge that will entice and encourage teen readers to delve into the material. Kim went the extra mile by researching the period in great detail and creating richly detailed, dynamic scenes centered around a charismatic teenage action hero. She embraces the collaborative process, and we really value that dedication.”

Herbst’s studio is in a well-tended neighborhood in San Francisco bordering Japantown, a lively enclave of restaurants and shops. Four floors up in a century-old apartment building, Herbst, 32, shares a workspace with her husband, Randall Smith, a clay sculptor and 3-D modeler. A Victorian parlor serves as their creative hub, loosely defined by a collection of brown sketchbooks on her desk and models of heads and torsos on his.

They met at the Maryland Institute College of Art (MICA) in Baltimore, where Herbst studied illustration, graduating in 2006. At first, MICA’s in-depth illustration program seemed overwhelming, “like plunging into freezing cold water,” she remembers. “I was floundering for a while, but I wanted a school that would kick my ass and offer genuine mentorship.”

Two years after graduation, she thought she was living the dream. A web game company hired Herbst to make 2-D flash animation games for cartoons on nick.com and mtv.com. Learning to make her characters move excited her, but it couldn’t offset the restrictive work environment. The “no talking or laughing” policy was bad enough, but the placement of desks—all facing a wall—made the office feel like a room of invisible cells. With each passing sixteen-hour workday, she became more and more convinced: “This company is where dreams go to die.”

The 2008 presidential election was the last straw. After voting in New Jersey, she commuted two-and-a-half hours to the office in Brooklyn, then worked until midnight. Barack Obama won the election that night, but Herbst missed the entire spectacle, recalling: “That was our generation’s JFK moment, and I thought, ‘What am I doing here?’”

Japanese animations had more frames, better color combinations and flashing light effects. Very fun for a kid. I wanted to make stuff like that.”

She couldn’t have quit at a worse time. By 2009, the US economy was in free fall, and her job applications were tossed on tall stacks of résumés from the rest of New York’s unemployed. After getting turned down by more than 100 job postings—including waitressing, clerking and frozenyogurt selling—a vision of moving back into her high school bedroom crept into her mind like a frightening apparition.

“I rationed food and even considered dumpster diving at Trader Joe’s,” she says. “I made contingency plans like the zombie apocalypse was coming.” With only one month until her money ran out, she applied to three jobs in California and was quickly invited to meet with the companies. The interviews included the mandatory speed-drawing challenges, including the classic “draw a 16th-century church that’s on fire.”

The game company Serious Business in San Francisco hired Herbst right away. Her new wage (industry standard) was more than two times her salary in New York. As the office elevator descended after her interview, her dreams-come-true moment finally arrived. “I screamed and threw my portfolio on the ground,” she says. “I was so excited. Employees were actually allowed to talk! I saw them playing Rock Band on their lunch break. Compared to where I had been working, it was night and day.”

The office camaraderie reminded Herbst of her old neighborhood’s ambiance growing up in New Jersey. The families in her South Brunswick suburb enjoyed block parties and frequent vacations together. Equipped with a freezing cold basement, her home was where the neighborhood kids gathered during their hot summers. “When the James Bond movie GoldenEye opened, a videogame based on the film came out with a split screen for four players,” Herbst says. “We were all screaming and killing each other over and over. It was so much fun.”

At Serious Business, Herbst worked as one of 35 employees. Three months later, she became one of 800 after Zynga, producer of the wildly popular FarmVille, acquired the company. Zynga assigned her to its new Treasure Isle project, where she created cute animals and gifts that players could buy as they hunted for treasure. But after three years of monetizing her illustrations, Herbst was ready for new subjects and more freedom. She still works in gaming, but currently on a contract basis for Kongregate, a publisher known as the YouTube of web games. “I’d love to see more illustration styles come into play for games,” Herbst says. “I’m hoping for less super-realistic and more stylized figures in the future.”

One of Herbst’s most powerful images is Sleep Paralysis, a personal work that draws viewers into her recurring nightmare. On a moonlit night, a ghostly creature appears in a swirling vortex and terrorizes a woman in bed, tugging at her blanket. The illustration candidly reveals the fear of being unable to move while imagining a controlling presence in the room.

I rationed food and even considered dumpster diving at Trader Joe’s. I made contingency plans like the zombie apocalypse was coming.”

Herbst posted the work on her blog, where it found new viewers. “It gets spread around,” she says. “That’s why I started posting process videos, animated GIFs, anything that moves.” She regularly posts on Tumblr, Facebook and Twitter and enjoys showing the stages of her complex drawings, such as The Chessboard, an illustration for the Hero Complex Gallery in Los Angeles. “It’s exciting, like having a backstage pass,” she says of seeing deconstructed work. “When an illustrator paints something and then completely changes her mind, I can see her struggle. I find it very reassuring.”

Social media has helped Herbst differentiate her work and discover new ways to develop ideas. It has also promoted more innovation in indie games through crowdfunding sources. “Gaming is really going toward virtual reality,” she says. “One wouldn’t think that’s good for 2-D illustration. But I’ve seen artists like Goro Fujita and Wesley Allsbrook ‘draw’ 3-D illustrations using Quill by Oculus or other virtual reality tech. I’d love to see what becomes of that!”

If 3-D is Herbst’s next frontier, her approach will be no different than when she was first transported by the thrill of animation. “Just draw it out,” she’d say to herself, knowing that art is not limited by anything but her imagination. ca 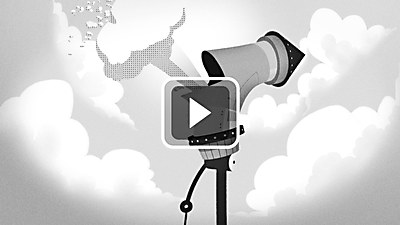 Features / Interactive
Giant Ant
A tightly knit team makes up the soul of this versatile Vancouver-based animation and production studio. 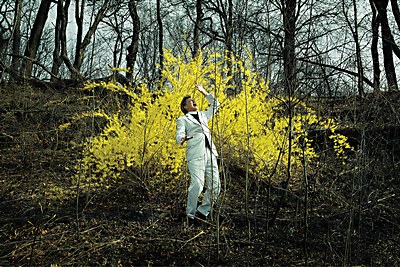 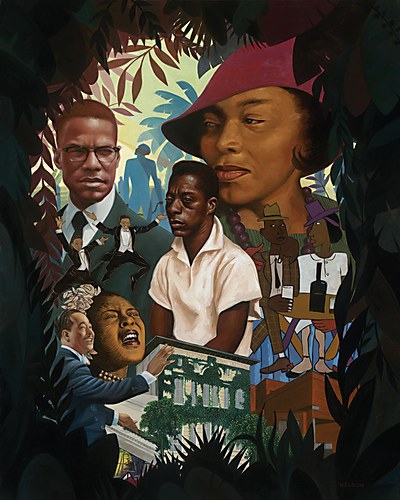