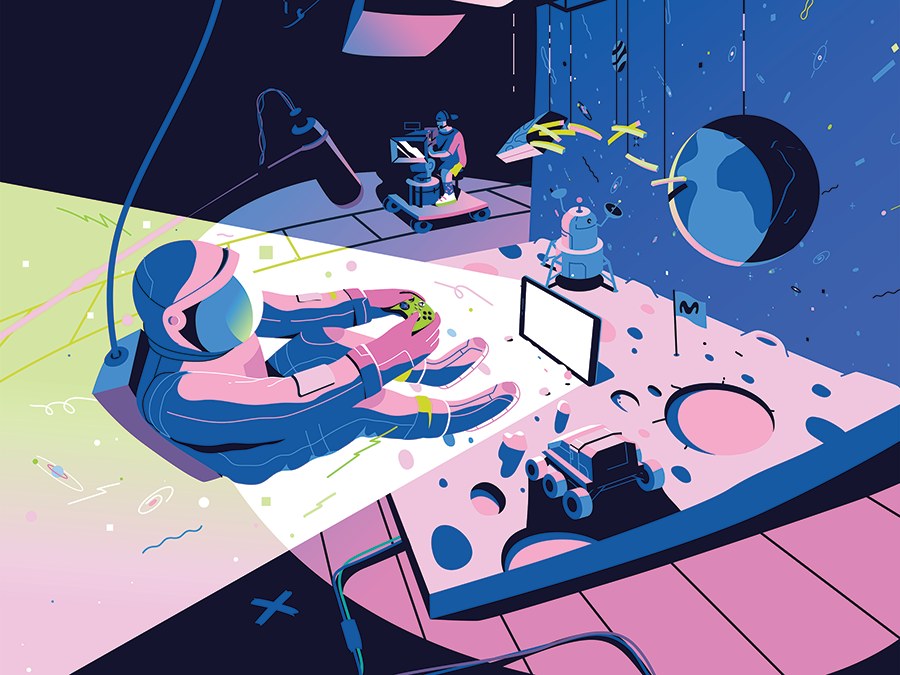 This Santo Domingo, Dominican Republic–based illustrator draws upon her subconscious as a powerful creative tool.

With a penchant for vivid, pastel color palettes and sensuous compositions, Santo Domingo, Dominican Republic–based artist Lena Vargas relishes in the diversity of her output as a freelance illustrator.

“Every time you get a new email, there is something exciting and different to work on,” she says. “Each project I take on has a special magic and a spark that makes them amazing.”

And it’s clear that she’s talented at bringing that magic out of any project she takes on, whether it be an animated film poster for Disney; editorial illustrations for magazines like Playboy, Popular Science and WIRED; product illustrations for brands like Colgate, Johnnie Walker and the delightfully named underwear brand ON THAT ASS; animation style frames for production companies like the globally based Le Cube; or even NFTs with artist collective Party Degenerates. 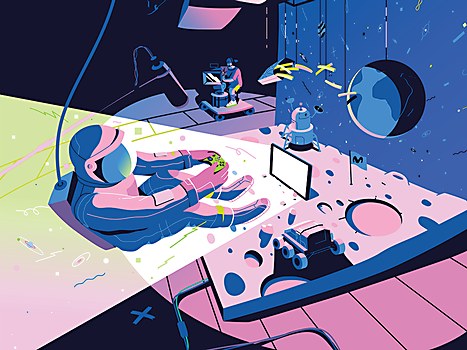 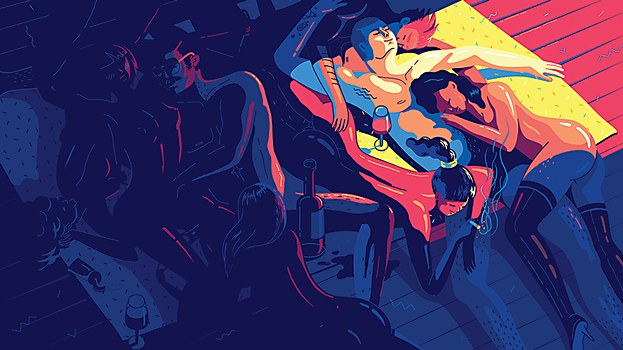 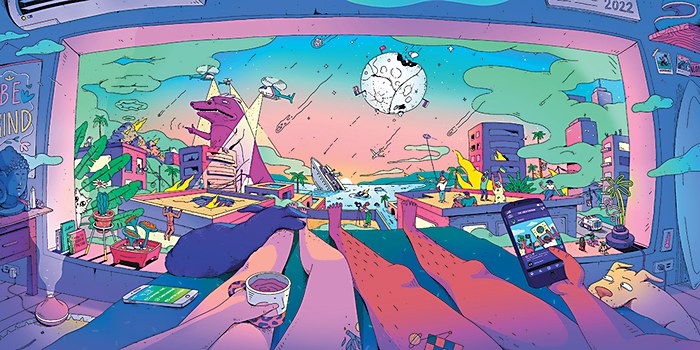 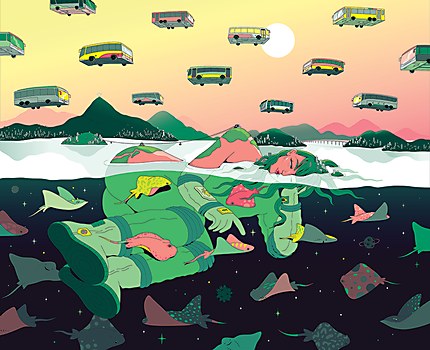 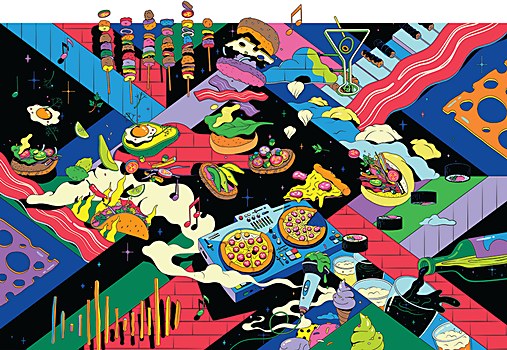 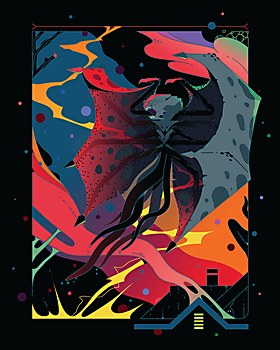 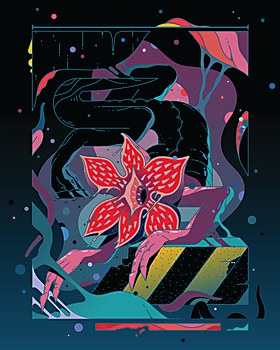 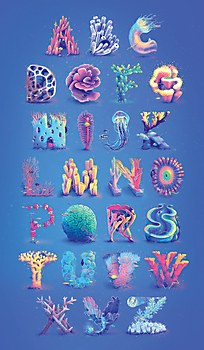 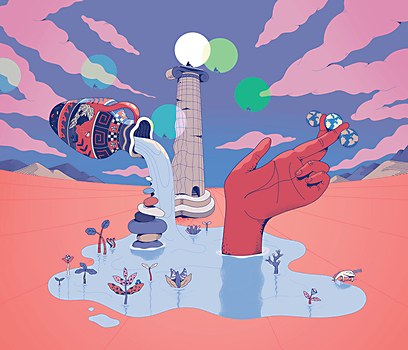 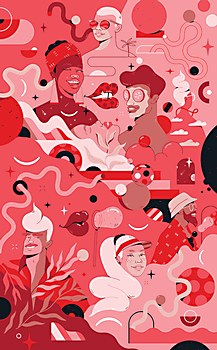 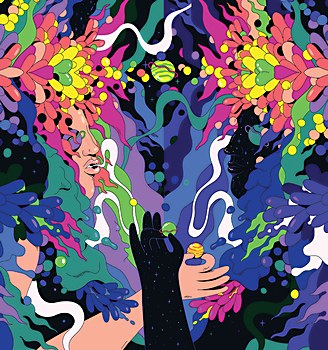 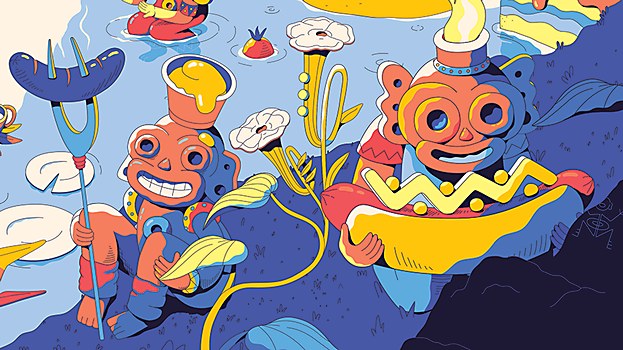 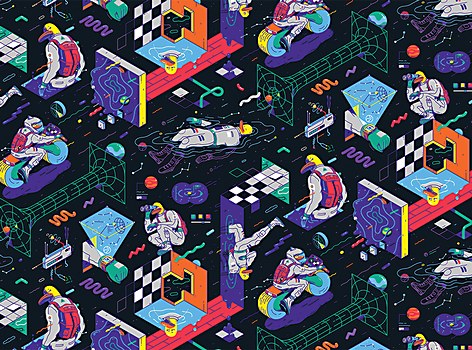 When I ask her how she keeps up with so many different kinds of commissions, Lena tells me she credits her prior experience as a designer and art director with giving her versatility. “I know how to tackle a brief, and this made me into a sort of chameleon,” she explains. “I try to understand the client’s needs and [pay attention to] when my artist persona can sit in the front or the back seat.”

Lena first obtained a BFA in graphic design from the Escuela Altos de Chavón in Santo Domingo and then an MFA in audiovisual multimedia from the Escuela Nacional de Artes Plásticas, now known as the Universidad Nacional Autónoma de México, in Mexico City. Upon graduating, she began working as an art director at Santo Domingo–based ad agencies like Capital DBG, Pagés BBDO and Young & Rubicam Damaris while taking freelance design work on the side; however, she realized that, despite enjoying the camaraderie of the work culture, ad agencies had stagnated her creativity.

“There is a certain glass ceiling for designers in ad agencies,” Lena notes. “Very few can go up the ladder to become creatives or partners. I saw a few older designers feeling very unhappy and others feeling weirdly comfortable doing the same thing for many years—and I wasn’t looking forward to getting there.” She began to examine the gap between where she was and where she would rather be. “At one point, I just wanted to find what moved me and made me feel passionate and excited about putting in those long hours on the chair in front of a computer,” she says. “The whole search inwards began with my first illustration project.”

Beginning with the idea to just make something every day, Lena began creating a daily digital illustration and discovered that it sparked something within her. “Just around that time [in 2016], the famous 36 Days of Type challenge was about to start, and I decided to join in the fun [with] illustrated type,” she recalls. “That meant opening my private Instagram account to the public.” When the official 36 Days account reposted some of Lena’s illustrations, more and more people began to follow her on Instagram—and the commissions and collaboration projects started to roll in.

The breakthrough for Lena came when the ING Creative Festival in Dubai commissioned her to create work for them. “There was no money involved,” she says, “but I saw a big opportunity since I [would be illustrating] for brands like MOMA, NASA and National Geographic.” When she traveled to Dubai for the festival, Lena met many other talented artists and attended inspiring talks, and that cemented her path to becoming a freelance illustrator. “The ING Creative Festival project also became my first blue ribbon feature on Behance,” she explains. “Being featured on the ‘Best of Behance’ opened so many doors, and clients began to take me more seriously—more paying gigs came my way. When I got paid for my first illustration project, it was a ‘clouds open, light shining on me, angels singing’ kind of moment. Around 2018, most of my freelance commissions were illustrations, and I made the decision to stop offering design services altogether.”

And it’s a decision that has turned out very well for her. “The blessed freedom,” she says when comparing her career now to her experience working as an art director. “You still work long hours, but you are your own boss and can choose the projects you want to work on. There is no box around you when you illustrate. Plus, it pays way, way better!”

“At one point, I just wanted to find what moved me and made me feel passionate and excited about putting in those long hours on the chair in front of a computer. The whole search inwards began with my first illustration project.”

Outside the box seems to be the best descriptor for Lena’s work. Looking through her oeuvre, one can see her predilection for creating flowing compositions that bend with curvilinear perspective—or sometimes do away with gravity altogether. On top of that, she illustrates with many different textures and artistic styles, taking full advantage of digital illustration’s broad set of tools to create everything from smooth, almost ligne claire–style pieces to sketchier, more tactile ones.

But, regardless of her exceptionally diverse results, the common thread of Lena’s dreamy aesthetic weaves her work together. “I feel like most of my illustrations have a surreal vibe to them because I tend to begin the sketching process in my mind,” she explains on her process, adding that she primarily sketches with Procreate on her iPad before finishing work with vectors in Adobe Illustrator and on her Wacom Cintiq. “I often start to sketch out my illustrations with my eyes closed, sitting down in a meditative pose or while falling asleep.” With this technique, she finds that she easily generates more entrancing ideas and discovers what metaphors or compositions won’t work for her illustration. “There is a moment when I am almost asleep, or even moments where I am dreaming and wake up, and I just see a composition or an idea that sticks with me,” she says. “Maybe this dreamlike state creates those floating, weird combinations that you often see in my illustrations.”

A great representation of Lena’s aesthetic—and one of her favorite projects—is her cover for the Los Angeles Times’s Food section in 2020. She conveys a long stretch of desert highway, framed by palm trees that end in fork tines or turn into sushi rolls or cocktails, covered in recognizable dishes that blend ingredients with Los Angeles symbols—such as a film reel instead of a tomato on a pizza slice or a marijuana leaf hidden in a bowl of noodles—all seeming to travel to a hungry, waiting mouth in the distance. What’s more, food trucks and hot rods hover and fly above the road, and the clouds appear to turn into ice cream cones or baozi.

In her illustrations for the 2019 iteration of the Dominican Republic–based Bocao Food Fest, figures based on Taino ceramics celebrate with hot dogs, sausages and kebabs as food plummets from the sky like meteorites. The more one looks, the more details one will find, such as a cactus in the shape of a fork and spoon or a microphone hidden within a flower in the foreground. “Tainos are the people indigenous to the Caribbean islands before the Columbus gang came around,” Lena explains. “The artwork immediately connected with locals, and the festival that year was Bocao’s biggest and most visited to date.”

Another of my favorites is Speaking Coral, a coral-inspired alphabet that Lena began as a personal project. Each illustrated letter vibrates with an electrical color palette and teems with details, exploring concepts and issues related to corals—such as B for bleaching, when waters become too warm for corals to sustain their algae populations and turn white. Due to her island surroundings and her strong connection with the ocean, Lena developed a mission to advocate for corals and reef conservation. “I’ve swum among beautiful underwater gardens, and coral always caught my attention—even more than fish!” she explains. “Every new fact I learned about coral was something I wanted to shed light on. I didn’t know how the entire alphabet would look; I just went one letter at a time.”

When I got paid for my first illustration project, it was a ‘clouds open, light shining on me, angels singing’ kind of moment.”

Impressed with her finished series, the Marine Aquarium of Rio de Janeiro (also known as AquaRio) in Brazil invited her to display Speaking Coral in its museum and learn more about its research on coral bleaching. “I even got to swim in [the aquarium’s] biggest tank with a vast amount of marine species like stingrays [and] sharks,” she recalls. “It was an unforgettable trip.” AquaRio still uses Speaking Coral to educate children on the many species of corals, and the illustrated alphabet appeared on merchandise for the international environmental nonprofit PangeaSeed Foundation.

Personal illustrations remain an important outlet for Lena, either as a way to experiment with new color palettes, textures or techniques or to blow off steam. For example, she points me to The Endstagram, an illustration she made to encapsulate the chaos of 2020. Shown from the thighs down and flanked by two anxious dogs, a couple lies on a bed and watches as the world outside succumbs to all manners of natural
and political disasters. “The illustration is full of messages everywhere you look [as well as] personal items,” Lena notes; one can see erupting volcanoes, a koala fleeing a fire, supporters of medical workers banging pans on the rooftops, and No Face from Studio Ghibli’s film Spirited Away hiding in a planter. “[The Endstagram] was also sold as an NFT to raise funds for Ukraine during [2022],” she explains.

When asked about new avenues of income for illustrators, Lena mentions NFTs, having created several of her own. “Passive income is a girl’s best friend,” she says, “and also Web 3.0. Although the NFT market is tough right now, this can bring a life-changing amount of income. No joke.” She created two collections after winning a pitch with Party Degenerates—and earning her biggest payment to date on a project. “At that time, my baby (yes, I’m a new mom) was ten months old,” she recalls. “After giving birth, I was still trying to get back into the working rhythm and find the time and energy to continue building my career. I decided to ‘play the lottery’ and see if I could win the pitch.”

And she did. Lena was selected to create one collection named Woodstock 3.0 and to collaborate with Malta-based illustrator Vilmante Juozaityte (a.k.a. “Bulma”) on a second collection called Love Parade. “Each collection was made of 150 body and background traits,” she explains. “The process involved sketching out each body part, getting approval, and then creating the vector resources for the algorithm to run and create 10,000 artworks per collection. I worked on this day and night around baby time—which was really tough—but every time I had an idea for a body part or saw how the pieces were coming together, it gave me a huge boost to keep going. And seeing the [great] feedback from everyone was very rewarding.”

Ultimately, whenever there’s a challenge facing her, Lena will rise to face it—and thrive. “The best projects come along with the challenges,” she says. “That is the way to balance things out.” ca