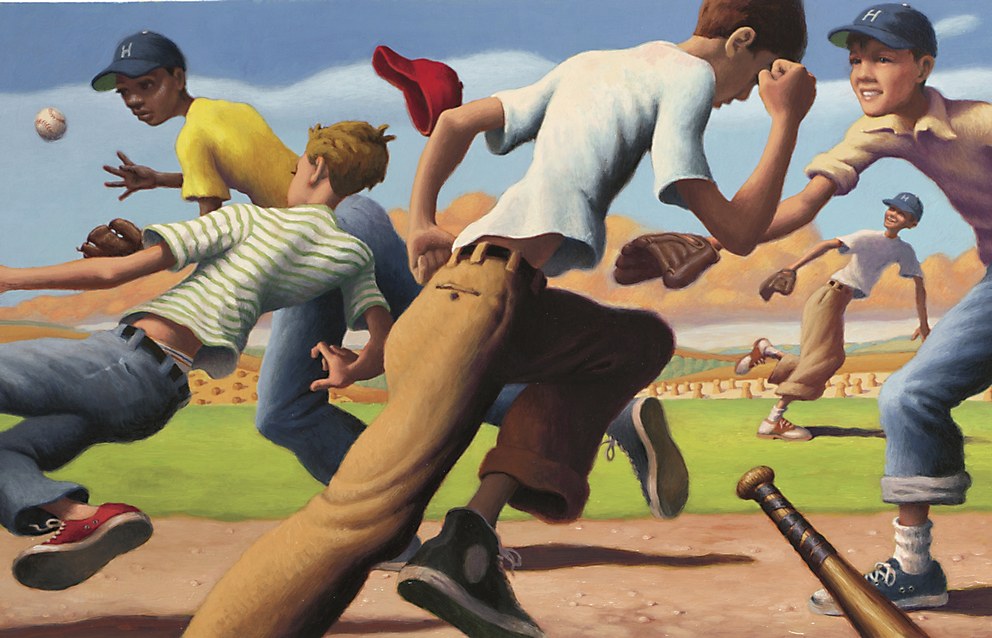 The work of this West Chester, Ohio, illustrator harks back to earlier days. 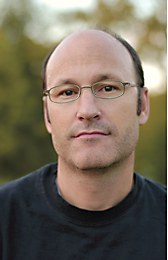 If one word could describe illustrator Loren Long, it would be storyteller. “It’s one of the reasons I gravitated toward the American Regionalist painters and the WPA Muralists,” he said of his favorite period in art history. Like the painters he admires, Thomas Hart Benton, Grant Wood, John Steuart Curry and N.C. Wyeth, he also tells remarkable stories by creating images that are poetic and thought provoking.

The Society of Illustrators has given Long two gold medals and he has received two Golden Kite awards from the Society of Children’s Book Writers and Illustrators. His art has given life to such titles as Madonna’s Mr. Peabody’s Apples, I Dream of Trains by Angela Johnson and the new publication of the beloved classic, The Little Engine That Could.

Long, 41, works in a studio in the basement of his brick house in West Chester, a suburb minutes from Cincinnati, Ohio, where he lives with his wife, Tracy, and his two sons, Griffith and Graham. The neighborhood is a quiet suburb of two-story homes with lush, green yards undivided by fences. Long is an articulate, humble man who speaks with a warm intensity about his life as his weimaraner, Stella, surveys the scene.

He draws and paints at a worn wooden desk using a drawing board that is propped up by a couple of annuals. When he’s ready to paint, he cuts a piece of canvas and puts it on an old gator board, props it up again and works in acrylics from a palette. No computer, no gadgets, just a few photos of Tracy and the boys, his parents’ cabin in the Ozarks, an illustration of Babe Ruth and models of aircraft and trains—figurines of American history.

Growing up in Lexington, Kentucky, Long’s interest in animals and sports, especially horses, dogs and baseball guided his drawings. Though he did not consider himself an artist, he took every art class that was offered. “My mom often told me I was ‘phlegmatic,’” he said. “But, she loved me enough to refuse to let me be lazy and waste my so-called talent. Though I’ve never felt like I was the most gifted, I had enthusiasm and I still have it to this day.”

At the University of Kentucky, he majored in communication, business and architecture without a plan. Long’s dad observed him spinning his wheels and said, “I spent my whole career selling drywall, but you can draw. If you can figure out a way to make a living at something that you’re good at and some-thing you love, it’s a pretty good way to go.”

He moved to Chicago to attend the American Academy of Art and began to develop, not only the skills of a daily discipline, like figure drawing for three hours each morning, but also a sense of a career. Long was introduced to the field of illustration and finally found what he wanted to do. 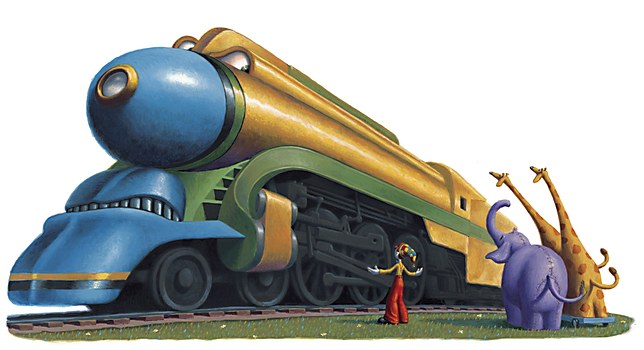 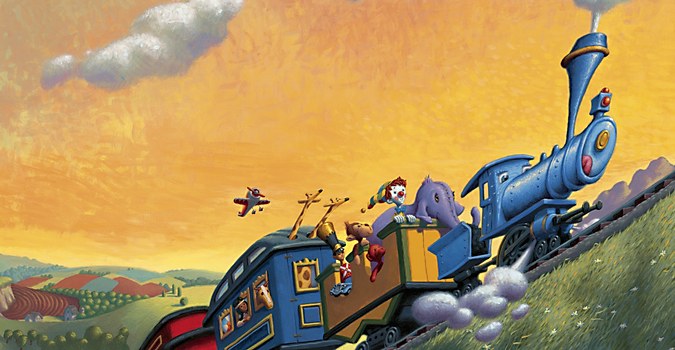 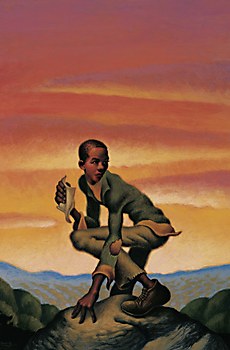 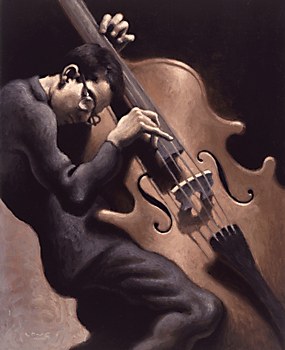 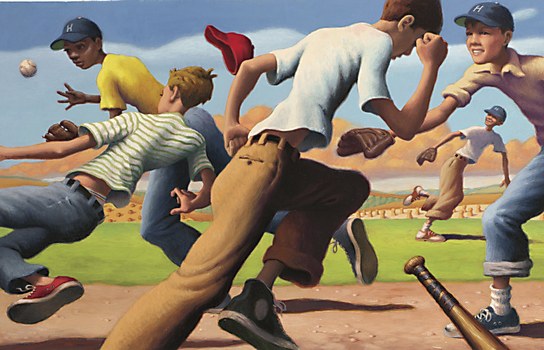 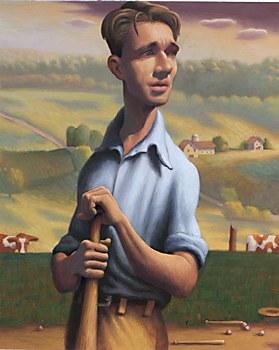 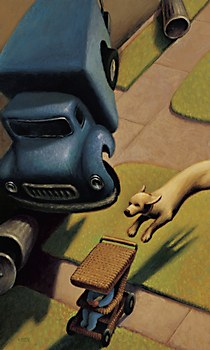 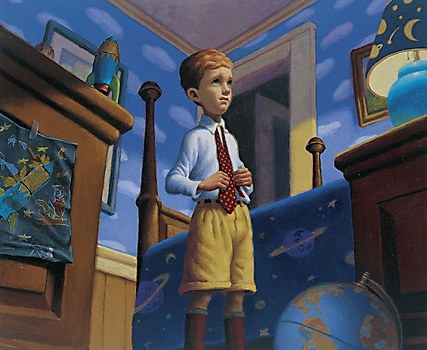 It has been over ten years since he arrived in Cincinnati for his first job as an illustrator with Gibson Greeting Cards. Though the company no longer exists, he fondly remembers it as the place he honed his style freelancing and also where he met his wife. Long’s work for Sports Illustrated, Time, Reader’s Digest and his inclusion in national juried exhibitions, such as the Communication Arts Illustration Annual, gave him national exposure and an opportunity to do his first book cover.

That first experience of reading a manuscript and coming up with an image for a book jacket was fulfilling and started Long on the path of children’s publishing. In 2000, Kevin Lewis, executive editor at Simon & Schuster Books, saw the jacket he illustrated for Miles’ Song, a book about the underground railroad by Alice McGill, and thought he would be a good match for their next title, I Dream of Trains.

“I needed someone who could really do a convincing little boy,” said Lewis, “and the image that Loren did was one of the most convincing I’d come across, not only facially, but in the body language, too.”

His first picture book taught Long about getting in the mind of his character and developing a backstory that would give meaning to his paintings of a sharecropper’s son growing up in the South in 1900. Long’s challenge was to express the presence of a train that cuts through the cotton field and inspires the boy and a generation of African-Americans that migrated north.

“It captured so much of what the manuscript was saying,” said Lewis of the impossibly small boy and the looming train on the cover. “It was wistful and powerful. Loren can take a topic that is bittersweet and really manage both sides of that bittersweetness. The image has sweetness, but it’s rustic, old, slightly ominous with a sense of foreboding to it, as well.”

The power and the mood comes from tiny graphite sketches, drawings of form, not line. These small, two-inch thumbnails work to contain the spirit in his paintings, the essence of the idea that he submits to the art director. His motto is, “Think about the Grand Design.”
Though I’ve never felt like I was the most gifted, I had enthusiasm and I still have it to this day.”


“It’s one of my Bentonisms,” he said referring to Thomas Hart Benton’s teaching advice. “He used to tell his students, don’t concern yourself with details until the grand design of a com-position works. I like to sketch very small and if it works small, it will work full scale. I often don’t even add the details until I’m working on the final painting.” A 32-page picture book requires between 16 and 20 images, which can be an over-whelming task, so he thinks in terms of “day-tight compartments”—the two or three sketches that can be done in a day, one day at a time.
“I’m endlessly disappointed with my final product because, at the thumbnail stage, I build up in my mind that this little, teeny scratching is going to be the greatest thing that I’ve ever or anybody’s ever created,” he said. “If you’re going to do something, think big. If you don’t shoot for the stars, why are you shooting at all?”

I Dream of Trains was awarded the prestigious Golden Kite award and Long was ready to do more. When he received the manuscript for Mr. Peabody’s Apples, Madonna’s second children’s book, he felt an instant connection. Set in Post-War America in 1949, the story of an elementary school history teacher in Happville was also about baseball, which has always been more than a passing interest for Long. “I love the game,” he said. “Its history and the movement and poses of the figures are a great subject for art.

“When the publisher [Callaway] first approached me it was very secret, I had to sign a confidentiality agreement,” he said of the celebrity project. “I never met Madonna personally until the day the book launched, but we had an insulated e-mail relationship for months. I would e-mail my sketches and they would e-mail them to her wherever she was—London, New York or Los Angeles.”

It was a successful working relationship and the book exposed Long to an international audience. While Madonna went on to write five books with five illustrators, none of their names appear on the covers, a marketing decision that created a minor controversy in the illustration community. Long’s attitude reflects his direct and unpretentious manner. “Well, clearly, that wasn’t my decision,” he said, “but this book has been wonderful for me and I appreciate Nicholas Callaway and Madonna for giving me the opportunity in the first place.”

Both Mr. Peabody’s Apples and I Dream of Trains were published in 2003 and Long began work on another book for Simon & Schuster, When I Heard the Learn‘d Astronomer, based on a poem by Walt Whitman from Leaves of Grass. It was a particular challenge because there were no characters, no setting and no time—only a voice that speaks of attending an astronomer’s lecture and becoming over-whelmed until he wanders away to study the skies for himself.
If you’re going to do something, think big. If you don’t shoot for the stars, why are you shooting at all?”


Art directed by Dan Potash, their second collaboration resulted in Long‘s second Golden Kite award for the Whitman poem. “He’s very open to collaboration,” Potash said. “Loren and I get into the finest details of painting an edge, adding a particular color to another color and what the affect of light is an hour earlier in the day.”

Potash added, “One of the strongest things about his figures and objects is they have the most unbelievable sense of presence about them—that human quality that’s imbedded in everything. Loren naturally brings this quality to his paintings, in the same way that Edward Hopper and Giorgio Morandi, the Italian painter, were able to; the distance between two things, how they lean towards one another or don’t, little things like that play to human relationships. They are often the invisible foundation for what we call mood—and Loren is a master in this area.”

The ability to humanize objects was an essential part of his opportunity to create new illustrations for his favorite childhood picture book, The Little Engine That Could. The story has been an American classic since its first publication in 1930 and this new version was a departure in style for Long, who had never drawn happy little clowns, sad elephants or trains with faces before.

“Little Engine is so important to me. The ‘I think I can’ mentality of that book defines what I’ve tried to do in my career,” he said. “The little blue engine doesn’t know if she can pull that train of toys over that mountain, but she thinks she can. And she’s willing to try. Even while I was doing this book I was thinking, ‘I think I can pull these paintings off.’ But you can never be sure.”

His color is brighter and the deep shadows that characterize much of his work are gone. “The story is about optimism and his colors reflect that,” said Semadar Megged, his art director at Philomel Books, Penguin. “In addition, of course, to being a wonderful illustrator, I believe he was asked to do The Little Engine That Could because of his retro style, and The Day the Animals Came because, among other reasons, his strong sense of perspective that is so wonderfully useful in a story that takes place in a cathedral.”

Long recently visited New York City where he was invited to do a reading and book signing of The Little Engine That Could for the Great Read in the Park. He sat in a big chair and invited the children to join him on stage. While he read, they swarmed over him, sitting in his lap, flanking all sides and wanting to be near the artist and the story. Their response delighted him and for a moment, the man, whose art never reaches the vision in his mind, was content. ca 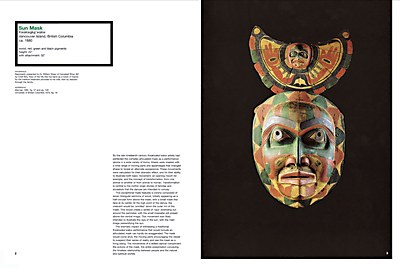 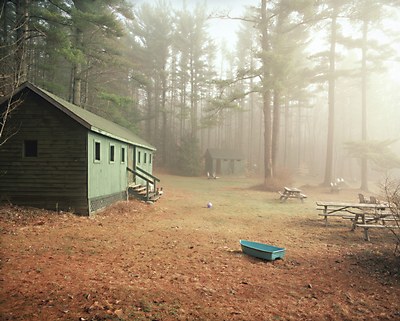