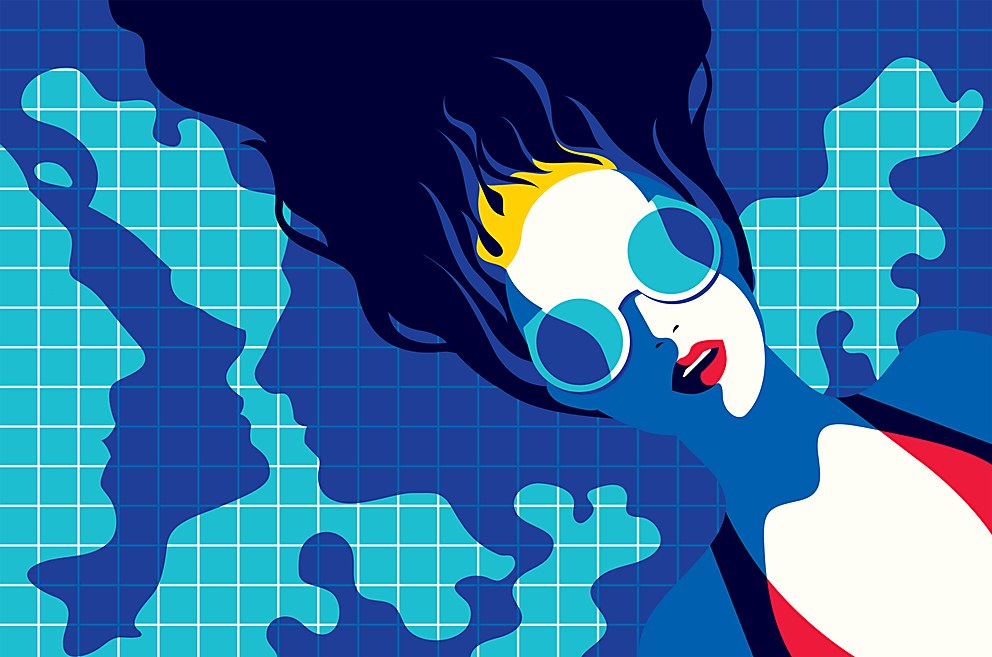 Colors, shapes and shadows define the illustrative style of this London-based artist.

Under a high ceiling, Malika Favre is lounging low on the sofa in her studio apartment. Her dark, intelligent eyes survey the sturdy shelves across from her, resting upon a detailed drawing of Battersea power station, a skateboard emblazoned with her colorful graphics and a framed print of the elegant woman-in-hat illustration she did for The New Yorker. On her desk, an iMac sits untouched; at a table to one side, her assistant, Thomas, works on a laptop, running the online shop.

“Actually, I’m on a bit of a break at the moment,” says Favre.

But that’s not why she’s on the sofa. On the coffee table wait her MacBook Pro and a bijou graphics tablet. She works from her couch and makes no bones about spending ten hours solidly sketching out ideas for clients like Le Monde, Sephora and Vogue.

“I’m working on a couple of editorial pieces,” the French artist explains. “I do mainly magazines and collaborations these days. I have moved away from advertising and branding and have decided to go back to what I did in the beginning, which is editorial.

“I just find that the quality of the work is much better, and the briefs are much more interesting. You get more creative freedom, especially the magazines I work with, like The New Yorker. You are sent an article, and that’s it—you don’t get told what to draw or what to do.”

From the top floor of a 1920s building in Hackney, in the East End of London, Favre’s confidence is at a peak. The bold, graphic style she has developed over the last fifteen years attracts prestigious projects. When she was invited to design the poster for this year’s Montreux Jazz Festival, held every summer in Switzerland since 1967, she became part of a group that includes Milton Glaser, Andy Warhol and Keith Haring. Her poster is full of female silhouettes dancing, the negative spaces between them forming instruments.

The concept is genius, but as is so often the case, it’s all down to the execution. The poster works so well because the shapes are strong and simple. Favre spends hours on her sofa, perfecting curves and reducing forms to as few lines as possible. 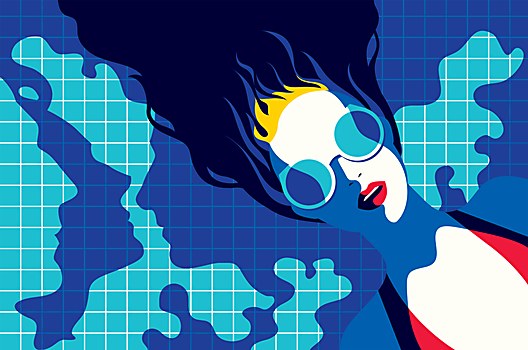 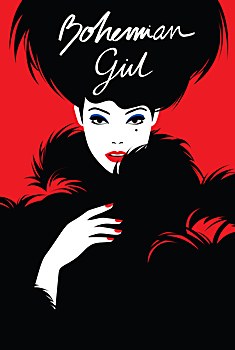 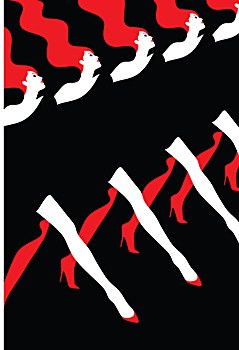 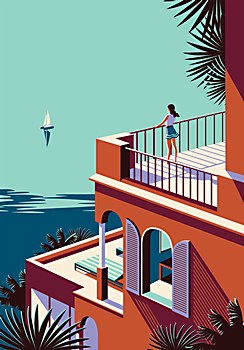 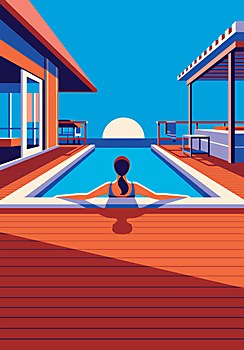 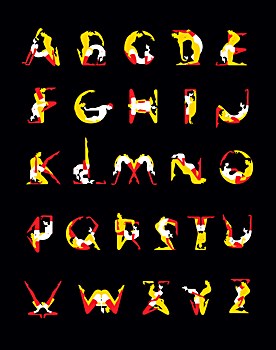 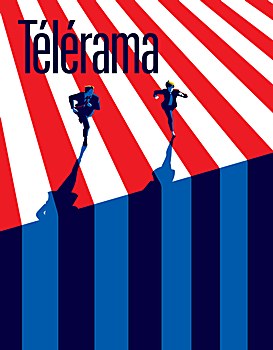 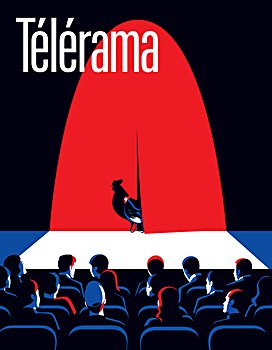 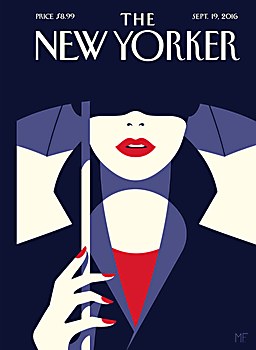 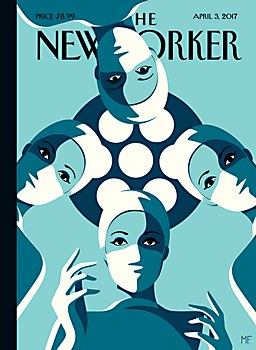 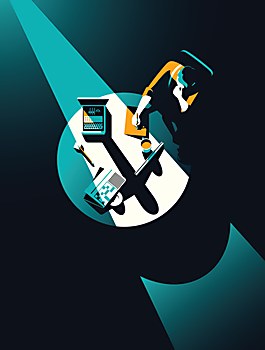 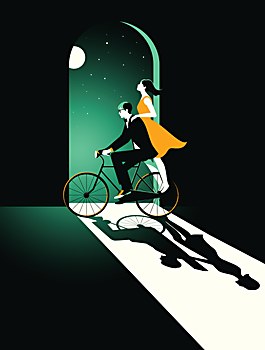 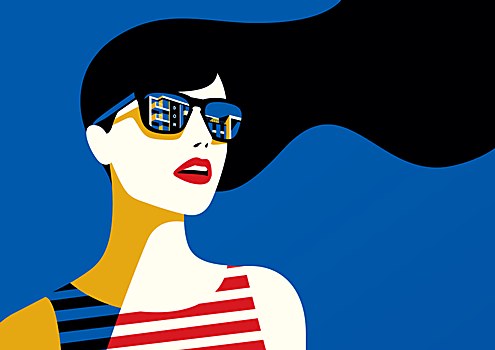 Like many leading vector illustrators, she seeks out an ideal form for each element within an image. What you don’t always get with other vector illustrators, however, is such a skillful use of color, light and shadow. Although Favre’s black-and-white images rely on strong forms, it’s her color palettes that really pop off the page with a 3-D, almost cinematic quality.

Her use of shadow is incredible, and she puts this down to the fact that she began drawing when she was three years old—and she has been doing so ever since. Long before vector graphics arrived, giving everyone the ability to construct images from geometric shapes, Favre knew how to look at light and shadow. She could draw the human body. She applies the same paring-down process to the light in her work as she applies to the lines in her work.

“Having a deeper understanding of how light and shadow work allows you to decide which shadows are important and which ones aren’t,” she says. “If it doesn’t add anything, I take it out. I used to remove a lot in the beginning, but the more I do this, the more I know [from the start] what needs to be drawn and what doesn’t. But I still always end up removing something from most images.”

There’s another factor, too. Favre was born with a severe case of strabismus, or crossed eyes. It was surgically corrected when she was very young, but she still sees perspective differently from the rest of us. “I can’t see 3-D, for example, so if you give me 3-D glasses, I see blurry. Makes it cheaper for a movie ticket,” she says with a laugh. “Maybe I see the world flatter than you do and see shadows as flat things. My eyes see what they see, and my brain reconstructs it, and that’s essentially what I’m doing in my drawings.”

Favre’s use of color plays a big role in what she achieves with light and shadow. Early in her career, her work was likened to optical art for her oft-used repeating patterns that generate optical illusions. Colors were added to make the images pop. Today, she studies how colors work together to represent perspective. “For a simple example, blue can be the shadow of pink, black can be the shadow of blue, pink can be the shadow of white,” she explains. “I always find colors that can have a relationship with each other in order to create contrast with as few colors as possible.”

Having a deeper understanding of how light and shadow work allows you to decide which shadows are important and which ones aren’t.”

With her tendency to minimize forms, it’s little surprise that Favre has a background in graphic design. Before becoming a freelance illustrator in 2010, she had spent five years working at the seminal London design studio Airside. Founded by Nat Hunter, Fred Deakin and Alex Maclean, Airside was known for its colorful, vector-led campaigns, websites and animation work. Prior to that, Favre had studied digital media at the University for the Creative Arts Farnham in the United Kingdom and graphic design and advertising at the École nationale supérieure des arts appliqués et des métiers d’art in Paris.

Her design training shows through not only in her graphic style, but also in her creative process. When a brief comes in, she does a lot of research, iterating on various approaches. She never looks at illustrations and always at photography. “The shittier, the better,” she says.

“I’m not looking for artistic photography,” Favre explains. “It’s very factual photography—like image banks or really bad photography—because that way, I won’t be influenced too much. Sometimes I’ve got an idea and know exactly what references I need, like a hand position, a shadow or how I’m going to show a staircase. I’ll look at 50 staircases and see how they work, how they are put together.”

She will settle on several clear routes to present to the client. Usually, there will be five or six, but sometimes she does as many as 20. Each one will be different, and if it’s a magazine or book cover, the mockup will include the masthead and cover lines.

It’s an approach that clients like Françoise Mouly, art editor of The New Yorker, really appreciate. “Malika is very open and generous, and she sends a lot of possible ideas and contributions,” says Mouly. “Every single time we have an interaction, I’m left with more than just one solution, and the unused sketches can serve as starting points for other projects.”

She also admires the narrative qualities in Favre’s images: “You can see the intense amount of work that goes into the composition. It’s a kind of visual equilibrium. It pushes you, it pulls you, it leads your eye around and in a way it tells a story. And at the surface, there’s something that she is saying. It’s not just a pretty picture.”

Problem solving is important to Favre’s process, and she believes every piece needs it. She’s frustrated when clients find one of her images and ask her to apply the same treatment to their content. “I really disagree with it, and for me, it doesn’t work,” she says. “You end up treating one specific subject in the same way as another one. It looks like you’re recycling the same idea or the same visual tricks over and over again.”

Her personal projects further fuel her independent creative spirit. Ever since she broke onto the scene with her cover for Penguin Books’ 2012 edition of The Kama Sutra, Favre has created her own images alongside her commercial output. For The Kama Sutra, she configured each letter in the title using men and women having sex. Once she was done, she decided to complete the alphabet, and in 2013, she went on to show this collection at London’s famous annual graphic art festival Pick Me Up. Prints were made of each letter, as well as online animations. The project took on a life of its own.

I always find colors that can have a relationship with each other in order to create contrast with as few colors as possible.”

Today, Favre still makes screen prints of her work to sell online. By doing so, she thinks she improves her client relationships. “If they see that you’re doing personal work, subconsciously they don’t think that your livelihood or your life depends on them,” she explains. “They know that whether they commission you or not, you will be creating. It’s a weird thing to say, but I think it puts them in a different place psychologically. I think they come to you with more respect.”

According to her agent, Jon Cockley at London-based illustration agency Handsome Frank, Favre’s openness and honesty are two of the things her clients appreciate. Another is her professionalism. “At every stage in the process, there’s a finesse and quality to everything she does—even the little things, like the presentation of her drafts, the naming of files, etc.,” he says. “Talent is one thing, but it’s being meticulous and hard working that helps you maintain high standards. It’s these small details that make her so easy to work with, and clients often remark that working with her is a very smooth process.”

Going forward, Favre wants to carry on working with editorial clients like The New Yorker and also to expand her online shop. With her style fully developed and with her dynamic use of color, light and shadow, she now feels her work can step away from flat surfaces and move into the real world. With Parisian clothing brand Alice Balas, she recently released a leather jacket embroidered with her imagery—very cool indeed. She also aims to collaborate with a product designer, so you may soon see some Malika Favre home wares.

“Now that I’ve really put commercial work to the side, everything is up in the air, and I am trying to focus on new things,” she concludes. “I like the idea of collaborating with friends, and if someone has a talent, let’s combine. Let’s try and do something new.” ca 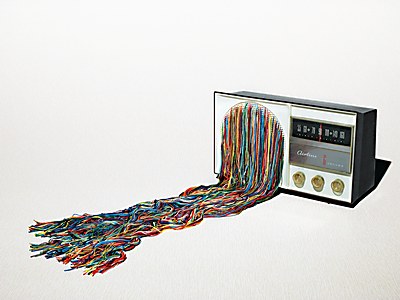 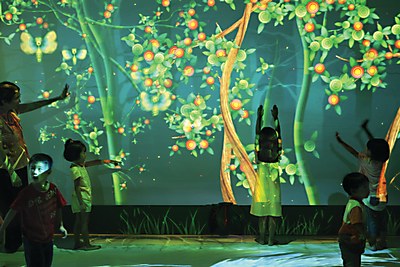 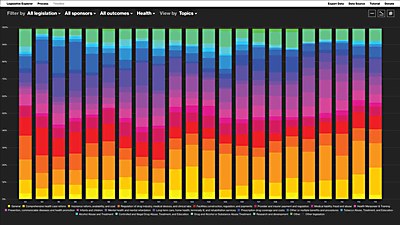