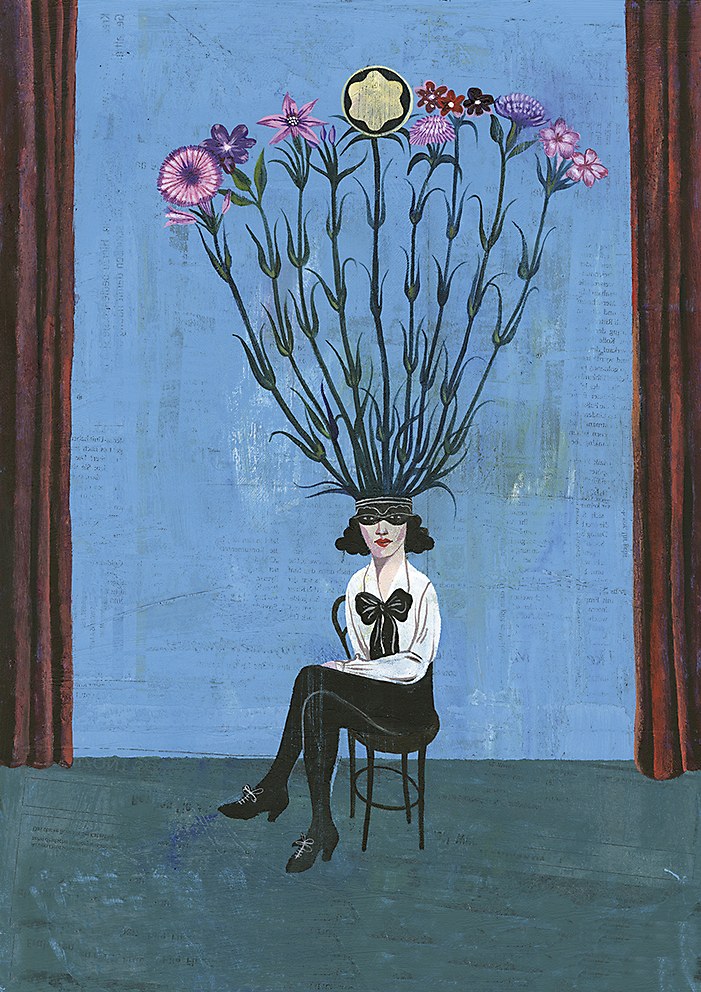 At once surreal and lyrical, this illustrator's work astounds by color alone. 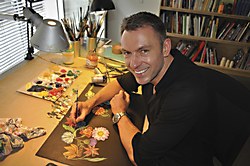 The range of influences people see in the work of Berlin-based Olaf Hajek is staggeringly wide. Giuseppe Arcimboldo, Frida Kahlo and so on across the ages. In part, it’s because he’s so versatile—surreal, primitive and precise all at once. But Hajek doesn’t paint in terms of references. He paints in remembered collages—drawn from pretty much everything he’s ever seen.

His body of work teems with figures whose faces, beards or bouffant hairdos are comprised of organic matter: lyrical clusters of flowers, rivers, birds and fruits. You are probably right to detect a whiff of Arcimboldo’s sixteenth-century “composite heads” here, but it’s just a whiff. In these works, Hajek is expressing his own, very modern vision—the idea of the universe within, the “secret garden” of our internal lives.

For example, there is Flowerhead and Black Antoinette—also the names of his 2009 and 2012 monographs, respectively. He seems to have put these figures through a kind of transcendental X-ray machine. And now we can view the innards of their souls: the fear, love, ambition, despair and hope that otherwise hides behind flesh and bone.

When Hajek does make specific historical art references, he draws original, sometimes politically charged, conclusions. Consider Black and White Adams, part of Hajek’s 2011 Cape Town exhibition, Dark Clouds Are Gathering. Absent Eve and bedecked with fig leaves, these two Adams—one black, the other white—strike Jan Gossaert poses in the Garden of Eden. But Gossaert isn’t an “influence.” The Flemish painter has just provided a convenient springboard, which Hajek uses to challenge norms of race and gender. 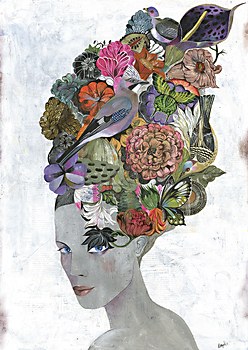 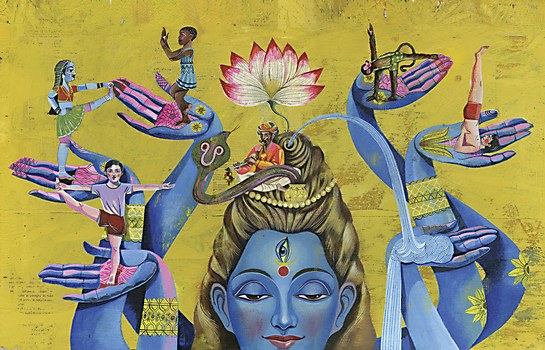 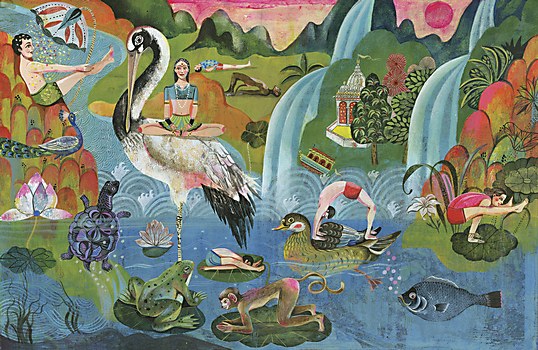 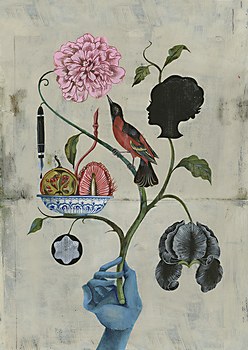 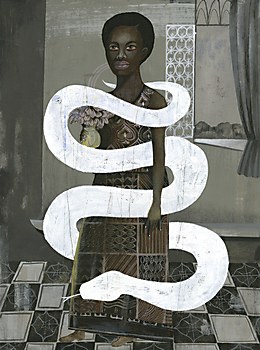 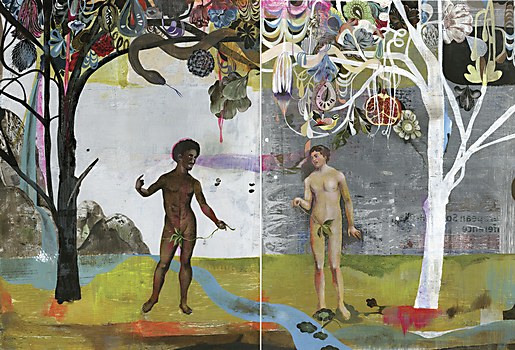 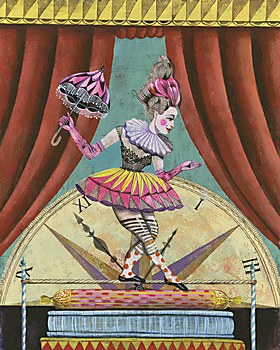 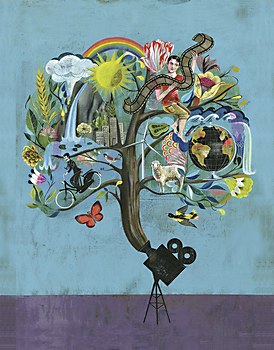 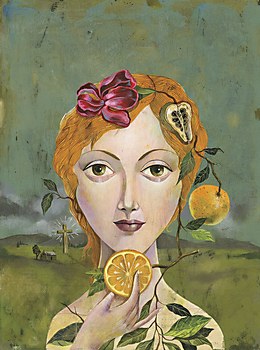 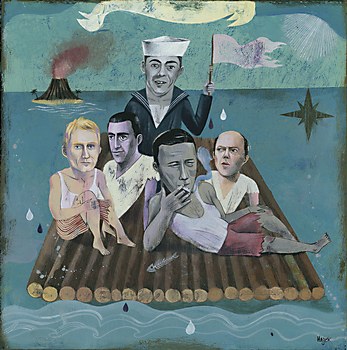 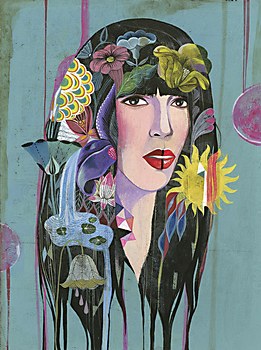 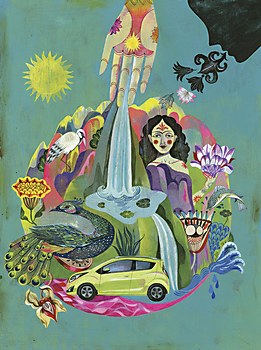 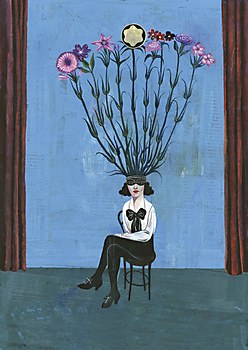 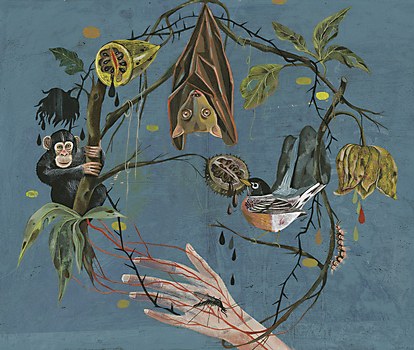 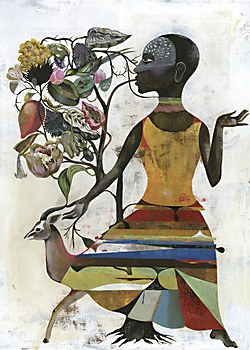 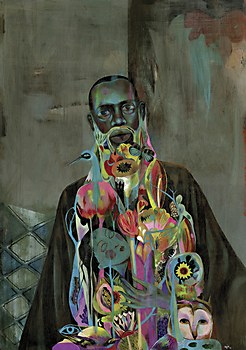 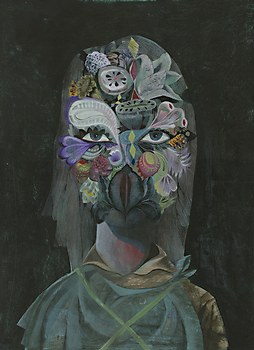 Ultimately, he has more heart for unknown naïve and outsider artists than for Romanticism or the Renaissance. His allegiance to American and African folk art traditions manifests in his preferred medium, acrylic on cardboard or wood, and in the way he messes with proportion and perspective.

In a 2007 illustration for Germany’s NEON magazine, authors like J.D. Salinger, Thomas Pynchon and Peter Hoeg float away from land on a raft, heading toward the comforts of their (ironically well-publicized) reclusion. Hajek captures each writer’s likeness, but plops their faces atop distorted bodies. A flat, geometric star/sun, which might have been plucked from a colonial American quilt, hangs in the sky.

In another example, he created the title sequence for Pray the Devil Back to Hell, a 2008 documentary about the group of women who fought to end the bloody civil war in Liberia. Hajek’s depiction of child soldiers and warlords channels the hand-painted posters that advertise electrical stores and barbershops in Africa.

Without getting too deep into talk show psychology, it’s safe to say that outsider art appeals to Hajek not just because of its formal qualities but because it aligns with his sense of self. “Oh, yes,” he says, “I am an outsider.” Raised in both Germany and the Netherlands, he’s a virtuosic painter who happens to have never formally studied fine art.

As a teen in Bonn, Germany, he did attend art lessons. The emphasis at the local studio was on letting go of prescribed rules and regulations of painting and theory, none of which the studio actually taught. Students painted with their fingers, for instance. “One teacher told us that if we were struggling with the nose on a portrait,” he recalls, “just leave the nose out, because at least in the end you will have a good painting. This was very freeing.”

While they didn’t provide a foundation in, say, color theory, those lessons were extremely important. They convinced Hajek to pursue art at the college level, to the consternation of his army official father and government official mother.

Sisters and their boyfriends, in matters parental, can be handy creatures. His older sister’s boyfriend at the time, an aspiring artist, showed the high schooler’s portfolio to the admissions powers-that-be at Fachhochschule Düsseldorf. The university granted Hajek admission. But to assuage his parents’ anxiety, he was obligated to compromise, pursuing a graphic design degree for its comparative security.

Contradictions are very important to me,” he says. “I try to find a combination of control and freedom.”

The curriculum focused on typography and layout. Illustration was not an option. But Hajek almost immediately knew that graphic design would require too much nine-to-five tedium and not enough art. He pursued illustration and painting on his own. On graduation, he couldn’t leave Düsseldorf—boring and bourgeois in the young graduate’s mind—fast enough.

In Amsterdam, he pounded any strip of pavement that might lead to illustration opportunities. The world opened up quickly. A high-profile German magazine assigned Hajek an illustration, which yielded an award and the accompanying confidence he needed to plan a trip to New York. There, he found his first agent and met with The New Yorker, which hired him to attend and illustrate a play.

Two years later, he moved to Berlin as an established illustrator. Today, he exhibits fine art widely and has produced illustrations for the likes of Cacharel, Montblanc, Swatch, Rolling Stone, GQ and Architectural Digest, among others. Recognition has come from London’s Association of Illustrators, D&AD and Germany’s Art Director’s Club.

“I sometimes wonder how things would be different if I had studied art,” says Hajek. “But I think I had the luck to create my style based on my own personality. It all has to come out of me.”

If there were an overarching quality in Hajek’s work, it wouldn’t be a specific influence. It would be beauty, particularly as it pertains to color. And color. And color. And color. A poster for the Macy’s Flower Show—in an ecstatic palette of pinks, oranges and blues—celebrates Hajek’s admiration for Indian miniatures. He likes that their intricate details sit in opposition to their absence of perspective. Hajek tempers the explosively sweet colors with details painted so finely they appear to be pencil drawn.

“Contradictions are very important to me,” he says. “I try to find a combination of control and freedom.”

The Macy’s piece has a kind of uncomplicated beauty. More typically, however, Hajek’s beauty hovers over a layer of darkness—literally (he paints over a base of black) and otherwise. Thematically, paradox is his preference. He likes flowers because they represent loveliness and life on one end of the cosmic spectrum, funerary death on the other.

I think I had the luck to create my style based on my own personality. It all has to come out of me.”

Actually, all things cyclical intrigue Hajek. For the New York Times, he tells the story of cross-species disease in a palette of dirty blues and mustards. A monkey, a bat and fruits with a pernicious appearance, among other hosts of disease, gather around a thorny, circular branch. No illustration of cross-species contagion would be complete without a mosquito biting a human hand, and here is one now. Its red veins—ostensibly zinging with mosquito-made malaria—extend outward to mimic and complete the biological wreath.

Opportunities to go dark and disease-y in commissioned work are far between. But Hajek’s theory is that the line between illustration and fine art must be thin as thread. “Every illustration should stand on its own as a work of art,” he says, and not just because it feels better. By working according to his own vision, he attracts clients who want what he’s got.

Hajek seems to find freest expression in South Africa. A decade ago, friends suspected he’d like the atmosphere, inviting him to check it out. He’s been visiting regularly since. When he’s not, he hits up his favorite Berlin bookstore for a visual toke. “I sit in the Africa section and ‘travel’ through the books,” says Hajek, who talks about South African light and color as if they were Visine drops for an artist’s dry eyes.

He was captivated when he learned that, in African townships, portrait photographers shoot subjects before aspirational backdrops: a jumbo jet might appear behind a family, for instance, ostensibly preparing to whisk them off to a private island. Hajek’s African Photo, also exhibited at Dark Clouds, depicts a woman before a patterned backdrop of her marble-tiled mansion. The flat white snake over her body disrupts the illusion—a crash of cymbals—reminding us that her escape into affluence is artifice.

It makes sense that Hajek would be attracted to Africa. For him, it represents the universal cycle, the source of all life—a paradise from which everything began. And, also, it encompasses the inverse of all that: poverty, colonialism, apartheid, war.

In his painting Down By the River, he captures that sense of everything-ness with a scene at an other-worldly African riverbank. In alternately drippy and dry pigment, a cluster of jagged figures populates the bottom third of the composition, engaged in ritual and war, love and hate.

Hajek knows that, in Africa, he himself represents a paradox—as a white German-born man painting his understanding of a place he can’t fully know. He doesn’t claim to capture the truth of the continent, which is so vast—geographically, historically, emotionally—that no one person could, he says. Rather, it’s one man’s experience of a sliver of a place that grabs him. So even here, the self-taught artist is looking—and painting—from the outside in. ca 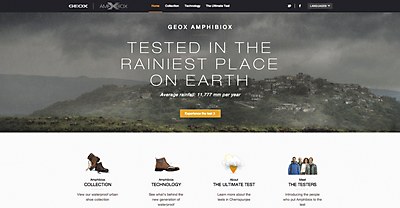 Features / Interactive
Stinkdigital
Film and interactive are the driving forces for this digital studio. 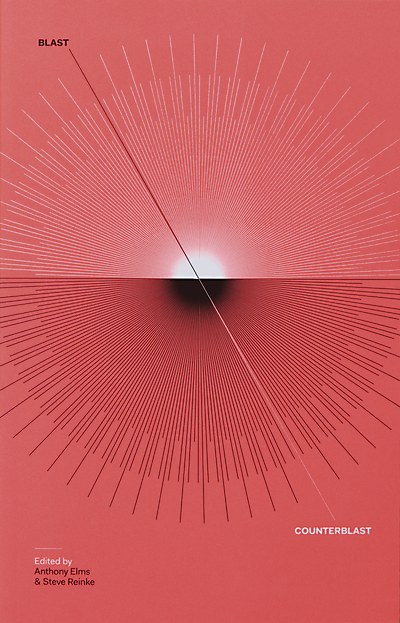 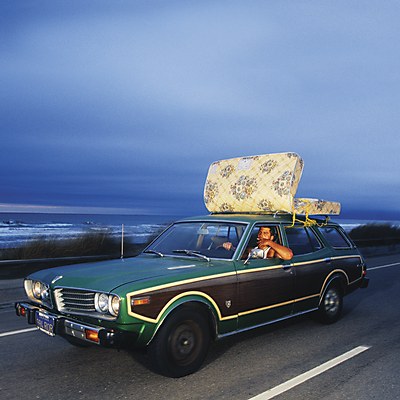