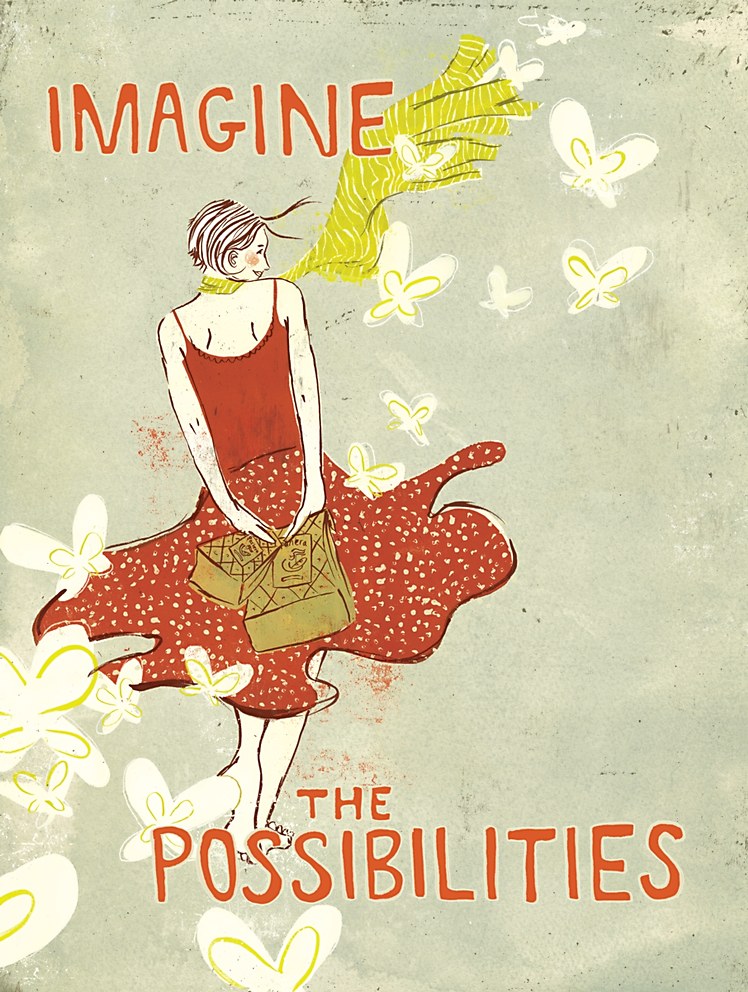 The energy in Penelope Dullaghan’s work boils up from the exchange between her Klee-inspired linework—textural, imperfect, thin and black—and flat blocks of color. 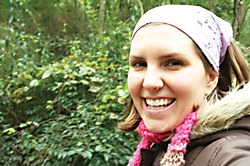 Occasionally, in American museums or cultural centers, there will be a crowd of whispering people, gathered around a group of Tibetan monks as they practice the sacred art of dul-tson-kyil-khor. For days, the crowd will watch the holy men slowly construct a mandala of the most intricate detail, using millions of grams of colored sand. When it’s complete, the crowd will then watch as the monks ritualistically destroy it. For some, it’s difficult to even fathom. For the monks, the process represents the impermanence of life, the principle of detachment and, as they release the sand into a body of water, a symbol of the earth’s cycles.

Winona Lake, Indiana, is about 12,937 miles from Tibet. But illustrator Penelope Dullaghan shortens the distance. On the porch of a local café, she discusses various pages of her journal, full of type, imagery and found objects. During a lull in the conversation, she appears to mull something over before finally deciding to share it. Looking up, she says that she throws all of her work away.

That’s exactly what she means. Except for those pieces she sells, Dullaghan’s every sketch, painting or personal exploration is eventually or immediately expunged. “Whatever I was doing in the past doesn’t represent me as I am now. The ideas are still out there, somewhere in the world. But the actual work—that just becomes baggage and clutter.” 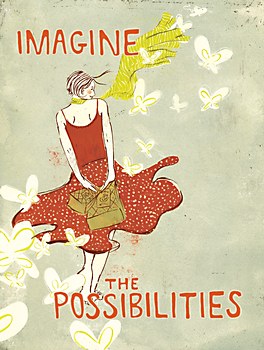 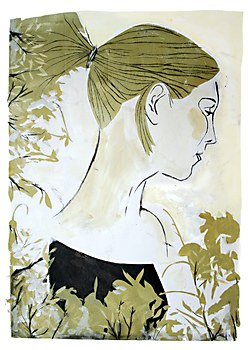 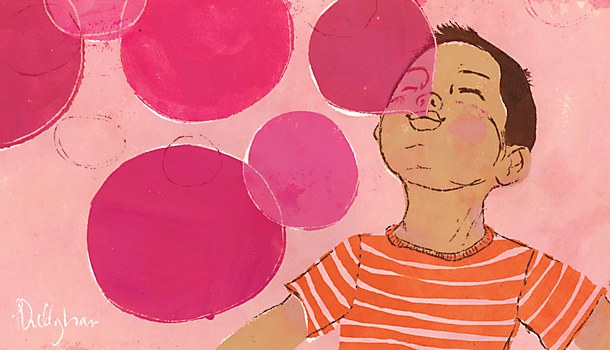 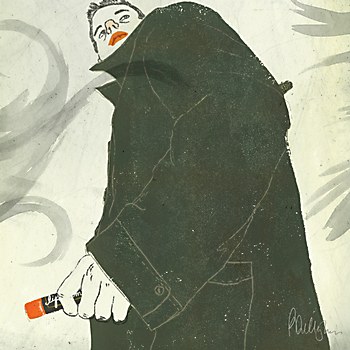 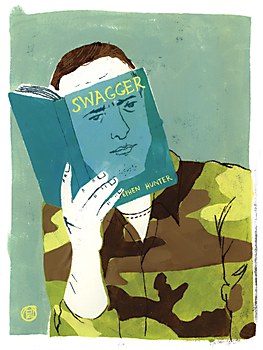 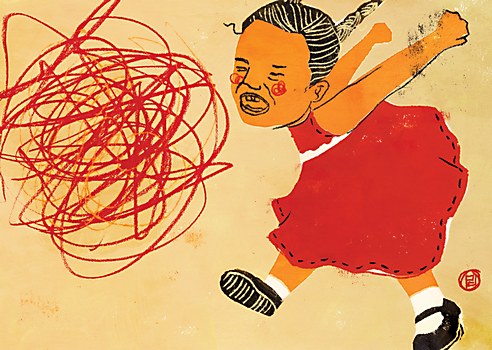 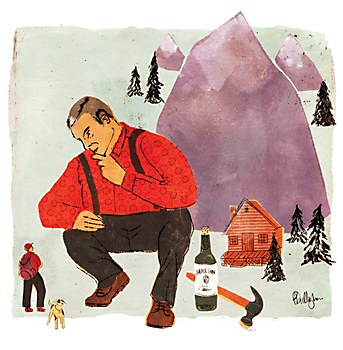 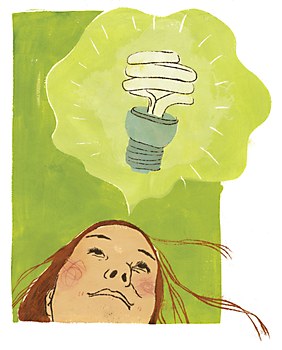 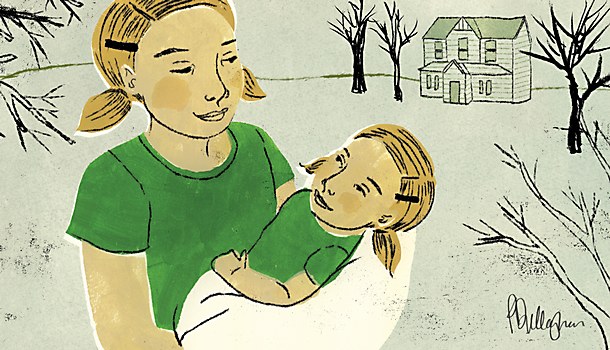 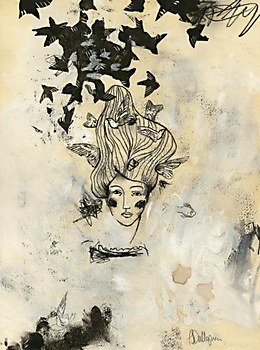 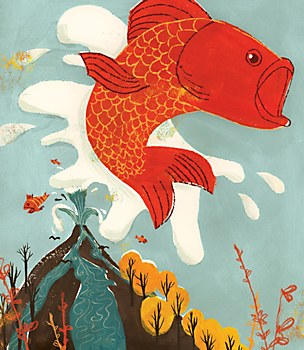 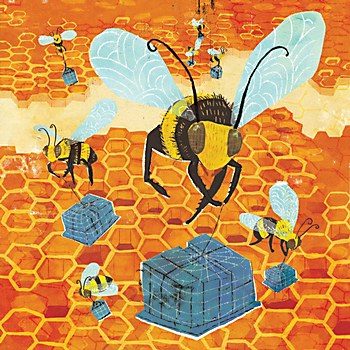 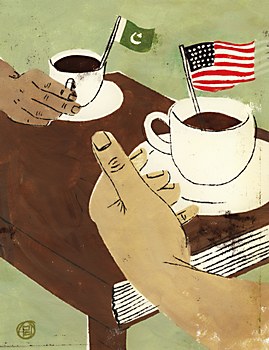 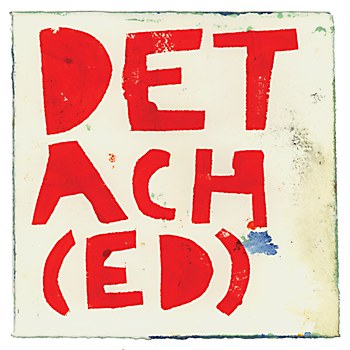 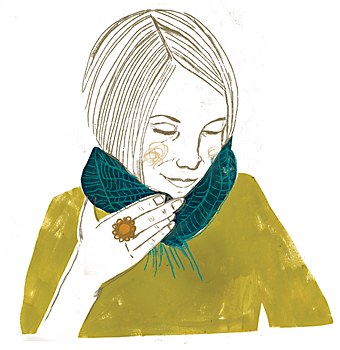 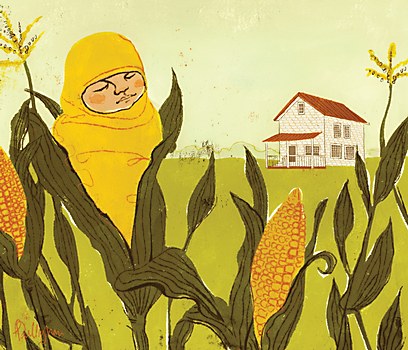 Dullaghan doesn’t bring up the Tibetan monks. But the student of yoga and Sanskrit is fully aligned with the ideals of detach­ment and anitya, or the impermanence of life. It’s one reason she can let go so completely of the physical evidence of her life in art, pretty much totally freaking out her adoring husband, by the way, in the process.

She turns to the next page in her journal. It reads: “Past lives. Do they haunt you or are you able to see that those ghosts only stay if invited? Do you know that even now and now and now you’re making ghosts?”

With a BFA in design from the University of Indianapolis, Dullaghan began her art directing career in 2000 at the Indianapolis agency Young & Laramore, having interned there first. A few years in, she and copywriting partner Colin Dullaghan began devoting much of their time to Steak ’n Shake, then the agency’s largest piece of business. They married in 2004.

That same year, Dullaghan sat at a café with Y&L creative directors Carolyn Hadlock and Charlie Hopper, now both principals/creative directors. Taking a deep breath, she slid a handmade card, her resignation letter, across the table. It read: “A ship in the harbor is safe, but that’s not what ships are built for.”

Says Hadlock, a Dullaghan fan: “It was very Penny.”

In her early days as a freelancer, Dullaghan’s pen-and-watercolor illustrations skewed cute. There were big heads and little eyes. In fact, the look kept clients calling. “But it wasn’t true to me,” she says. “And it wasn’t a sustainable style that could communicate different ideas to a wide audience.”

After about a year, she stopped everything to experiment. She went back to the art books, where Paul Klee, and in particular his 1922 Twittering Machine (Die Zwitschermaschine), made a plea for her attention. As she pored over books on the artist, Dullaghan thought of another Klee enthusiast: her friend in art and former boss David Jemerson Young, co-founder of both Y&L and 2nd Globe Studios, which helps clients and communities brand themselves through public art.

Over the phone, Dullaghan told Young how close she was to finding where she needed to be. It had something to do with Klee, but she didn’t know what—not exactly. Could she visit his studio?
OK, so, you see how this shadow here is blue?”


Quietly, the pair worked with any mark-making tool that leapt into their hands, mostly just trying things out. At some point, Dullaghan hit her stride. Piecing together the scant information available on Klee’s methods, she stumbled on a monotype technique that provided the quality of line she wanted.

Today, all of the energy in her work boils up from the exchange between her Klee-inspired linework—textural, imperfect, thin and black—and flat blocks of color. Using acrylics and Hahnemühle paper, she works quickly, painting the numerous elements of each illustration before scanning them in to composite the final.

Her work is never fully realistic nor quite fully graphic, notes Hadlock. In part, that explains the vague connection to early American folk or naïve art. In an illustration for the article, “I Gave Birth to Myself,” for the San Francisco Chronicle, Dullaghan uses few tonal shifts and a restricted palette, both qualities of naïve art in early America.

She also throws together a mix of two- and three-dimensional properties. Dullaghan’s central figure—a child holding the infant version of herself—is depicted without volume or depth. Behind her, though, the scene is rendered in perspective. Folk artists in early America—where disregarding the rules of perspective was the national pastime—would have approved.

In many cases, you can also glimpse shades of Edo-period, Japanese woodblock prints. Not in the motifs. Dullaghan’s imagery is more American than bubblegum. In fact, a lot of her work—including a San Francisco Chronicle illustration that’s actually called Bubblegum—suggests post-WWII advertising illustration and its concordant optimism. The Japanese-print connection is more compositional. It’s in the color blocks, and in the deliberate shapes Dullaghan creates with negative space.

Shortly after she quit the kewpie look, the Baltimore Sun commissioned Dullaghan to do a weekly illustration. And then, they got out of the way. “My work evolved so much in those two years,” she says. “I sometimes couldn’t believe I could experiment with composition and color and scale so much—and still get paid.”
Whatever I was doing in the past doesn’t represent me as I am now. The ideas are still out there, somewhere in the world. But the actual work—that just becomes baggage and clutter.”


One of her favorites from that period, which ran beside an article about children’s temper tantrums, was something of a departure—more German Expressionist than mid-century Weetabix. Its visual appeal comes from the warm palette, upwardly driving composition and sense of high-octane motion. But it’s not pretty. Nor optimistic.

It shows a child, and she’s an awful one, in the midst of a tantrum. A vengeful Crayola scribble, about the size of the child, captures her rage. And Dullaghan seems to have hacked the highlights right out of the page with a scythe, just as the Die Brücke artists of turn-of-the-century Germany appeared to do in their prints.

Another Baltimore Sun piece portrays a noirish, trench-coated figure for a humorous essay about lip balm addiction. “I loved the idea of having this shady character looking over his shoulder as if the ChapStick was some kind of illicit drug,” says Dullaghan. Clearly, the freedom to experiment had built muscle. The high-drama perspective, which has the figure receding from the bottom up, is nothing if not deliberate and expert.

Dullaghan was eleven when she realized she processed colors in a way that others often did not. Sitting with her mom, she suggested they paint an apple. “OK, so,” she said, “you see how this shadow here is blue?”

Blue? No, not blue. It’s a shadow, and shadows are gray.

Dullaghan tried to explain, but eventually her mom just laughed and gave Penny a squeeze: “This is why you’re the artist in the family and not me.”

Actually, Dullaghan’s grandmother was a painter. Anna Mae Kline made pictures of clowns, fruit baskets and, incompre­hensibly, football players. So no, she wasn’t Paul Klee, but she plied Penny and her brother Tom with art supplies whose mystical powers made hours fly by. Today an officer in the Marine Corps with a fine art degree from Tulane University (“a sensitive marine,” says Dullaghan), Tom remains her toughest, but most constructive, critic.

Now, Dullaghan is both mom and family artist, working from her modest studio-cum-playroom with her baby girl Veda (Sanskrit for eternal knowledge). Above her desk, a personal piece reads: DET ACH (ED), calling to mind detachment of all sorts, but mostly the Buddhist sort.

If Dullaghan is totally uninterested in preserving things material, including her art, her spiritual sense of the world is another story. Actually, it might be the only thing she deems worth passing on to others at all. In September 2008, she did that while teaching an Earth Art class at the Squam Art Workshops in New Hampshire.

She shares her written description for one assign­ment in particular. The first part: Create a piece of art from nature based on what you want or need to draw into your life. “And then,” she continues, inadvertently writing the précis for her own Communication Arts profile, “[we’ll be] letting it go and giving that very thing back to the whole. The piece of art you create will still exist in some form. This transience echoes the way of nature. Of everything. Always changing, evolving, becoming.” ca 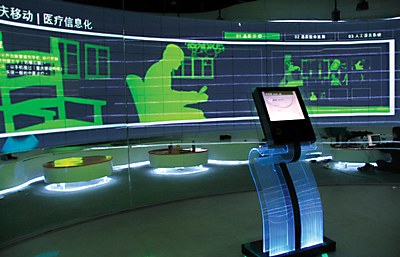 Features / Design
yU+co.
These days, this motion graphics firm in Hollywood sets the tone for more than films. 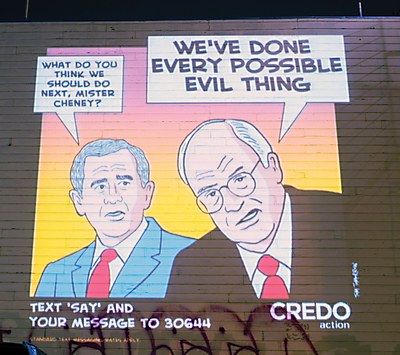 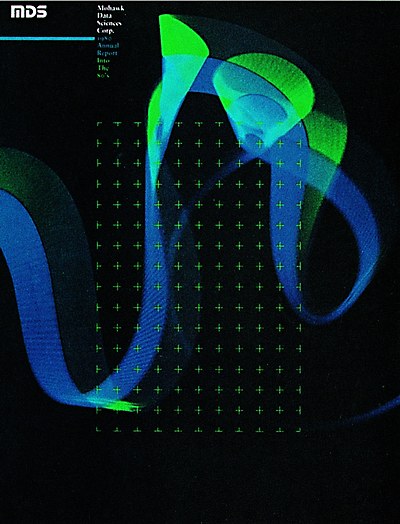