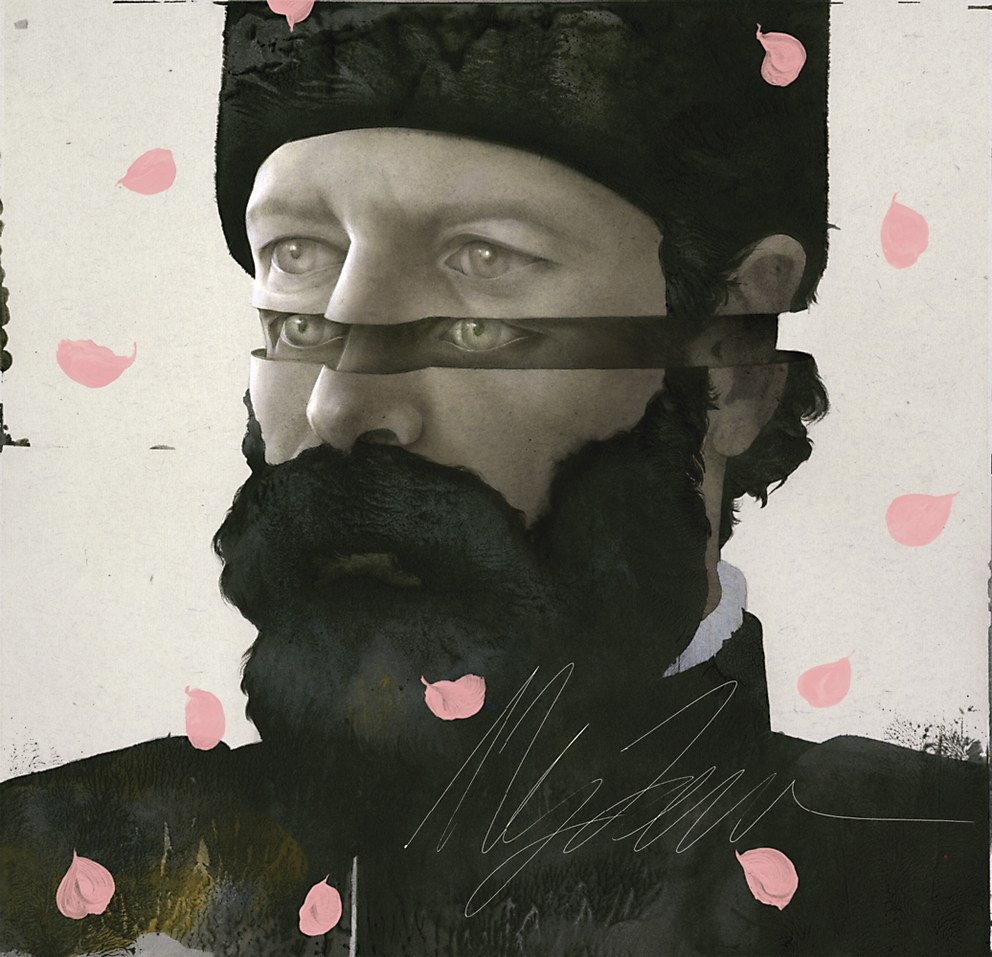 A Brooklyn illustrator weaves texture and tension into enigmatic dreamscapes. 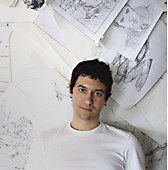 Outside the frenetic energy that engulfs Manhattan and its inhabitants lies Greenpoint, Brooklyn. In comparison, and despite its proximity to America's busiest metropolis, Greenpoint is, well, quiet. What the neighborhood lacks in conveniences—transportation tops the list—it more than makes up for with space, lots of it, and thereby has become a haven of sorts for illustrators.

At the heart of Greenpoint is the historic Pencil Factory, home to many studios and small businesses. Huge, yellow pencils embellish its façade, a testament to the building’s past—and its present. Inside this Art Deco building, where No. 2 Mongol pencils were once made, is a spacious studio filled with natural light, hardwood floors and five workstations, one of which belongs to illustrator Sam Weber.

The studio is more than a shared space—it is a community. The camaraderie between Weber, Christopher Silas Neal, Grady McFerrin, Ted McGrath and Kim Bost is palpable, and extends beyond the studio walls. It’s in this environment, surrounded by peers, that Weber creates work that seamlessly integrates his drawing skills with the computer—resulting in worlds where reality and fantasy coexist.

Using a mostly muted palette punctuated by deliberate swashes of color, Weber blends painterly layers that evoke both the sweet and macabre. Sometimes dark and dramatic, other times soft and enchanting. These morbid elements do not detract from, but add to, the allure of stories he paints for a range of clients that include the New York Times, Rolling Stone, Time, BusinessWeek, Men's Health, the Progressive, Tor Books, DC/Vertigo Comics and Random House. 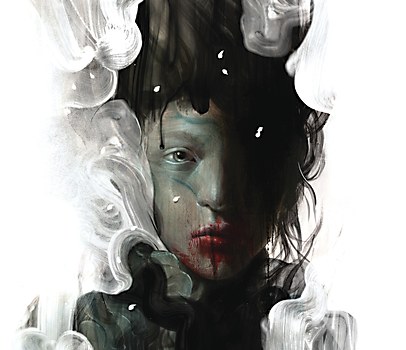 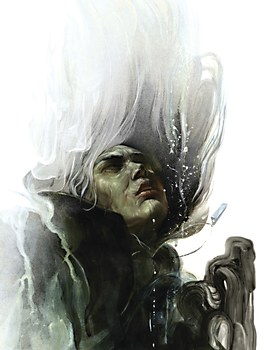 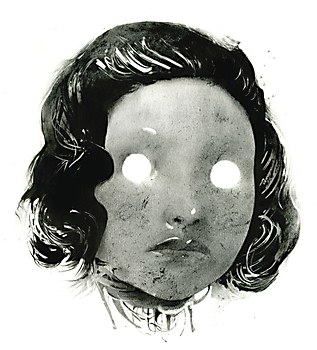 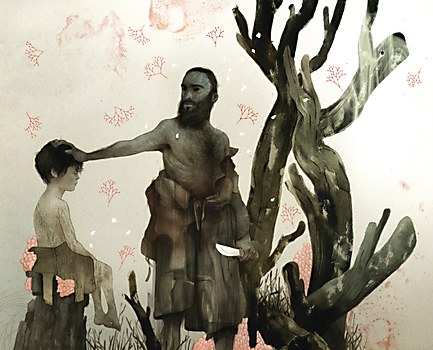 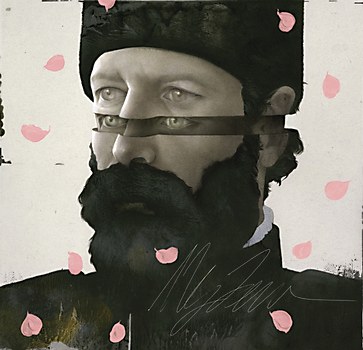 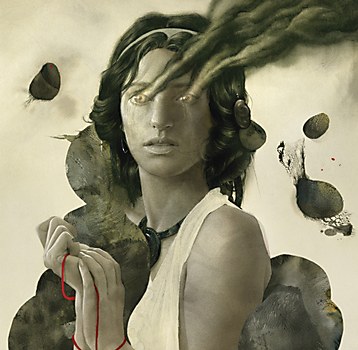 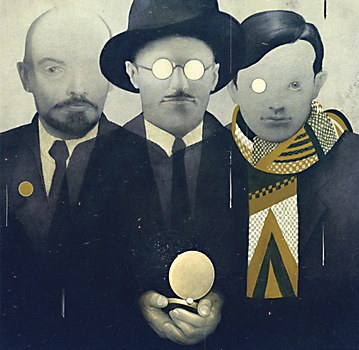 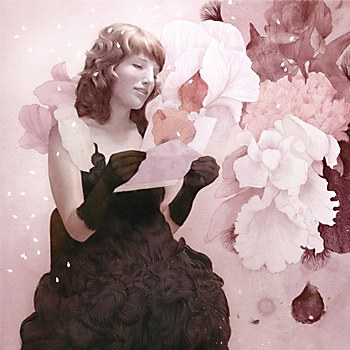 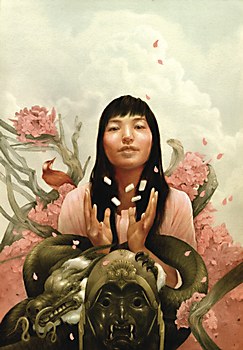 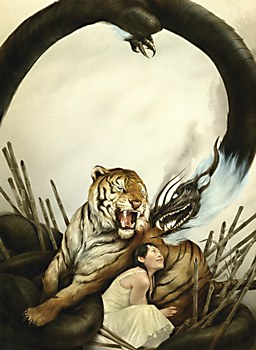 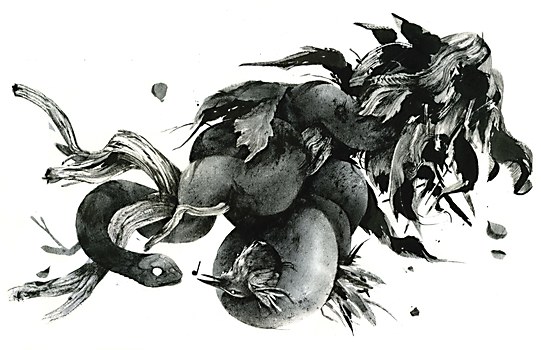 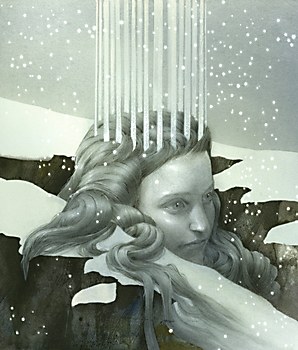 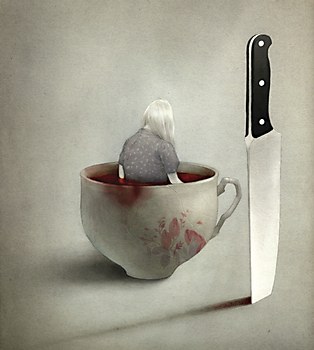 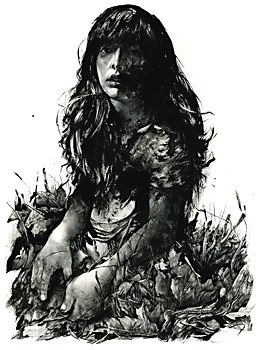 “I've always enjoyed trying to hide my process,” Weber admits, “not because I’m secretive, but there’s a little bit of illusion, that sense of magic.”

And it was exactly that which made Anthony Swaneveld tap Weber for Soulpepper Theatre’s 2009 season. “The season is full of intense, emotional plays with a bit of a darker flavor,” explains Swaneveld. “The illustrations had to appeal to this darker sensibility, but also act as marketing tools to sell the plays. What resulted were illustrations somewhere in between—most with a hint of humor and layers of meaning—making them not only beautiful, but ultimately approachable by the audience.

“One of the reasons I was drawn to Sam’s work was the fact that I saw his pieces as simple complexity. All have a straightforward subject or theme, but it’s not until you look closer that you begin to see the magic,” continues Swaneveld. “Knowing firsthand the process and technique that go into the finished piece...even the simplest of his sketches feel substantial. And, if you have the pleasure of seeing a finished piece close up, it’s a joy delving visually into the nooks and crannies of the strokes and lines.”

The ominous vein running through much of Weber’s oeuvre might give pause to some who wonder about its source of inspiration. A childhood wrought with angst? Not so. “I loved cartoons as a kid—especially the scary ones,” he says. “Both my parents are German so there are all sorts of morbid fairy tales that I grew up with that may have shaped the stories that I like to tell. They are interesting to include as themes, because I feel they are fairly universal. The same way that mythology and the Bible have permeated literature, the visual vocabulary of fairy tales is ingrained in us. As far as reference points, they’re useful tools to communicate ideas.

“Full disclosure: I think it’s hip subject matter right now. I’m certainly not the only one who’s into that sort of thing.”

His journey toward illustration began in Deep River, Ontario. Though Weber was born in Alaska, his father, a scientist, moved the family to Canada to work for the Canadian Forest Service when Sam was young. Deep River was not your typical small town. Built around a nuclear research facility, the town was home to many international professionals. “I had Chinese and Greek friends; friends from all over the world,” he says. “It was a great place for my sister and me to grow up.” And its local drugstore was Weber’s gateway to comics and a love of print.
I love the computer as a tool, but I don’t enjoy working on it as much as I do on paper."


“My real interest in illustration began when I was a kid reading comics,” he recalls. “I think a lot of illustrators my age would tell you that comics were one of the things that got them excited. I remember realizing that this is a field where artists were respected—they had fans. That really appealed to me.
“I’ve always loved print. I buy books and never read them. I buy them to have them,” admits Weber. “There’s something special about holding something in your hand. I don’t think anyone’s going to deny that. And it offers a little more validity, because anyone can put anything on the Internet. Getting onto some sort of Web site is great, but getting into a magazine or book just means so much more. Everybody understands that immediately, even if they’re not thinking about it consciously.

“I knew I wanted to be an illustrator early on. I specifically wanted to be in books and magazines. At the time, I didn’t realize how valuable it is to know what you want to do. In retrospect, I do.”

Weber studied graphic design and illustration in a joint program at the Alberta College of Art & Design, where he met fellow illustrator Jillian Tamaki, whom he later married. Always more interested in illustration, after graduating he moved to New York in 2003 to attend the School of Visual Arts—where, under Marshall Arisman and crew, his love of print blossomed.

The son of a scientist and a nurse found himself pursuing a career in art-without any roadblocks from his family. “My dad really understood that if you want to be happy, you have to do whatever it is that makes you happy,” Weber explains. “He was destined to take over the family business, and instead decided to move to Canada. I sometimes secretly fantasize about having parents who fought me, and I could talk about how I overcame that. But, unfortunately,” he says with a smile, “they were these wonderful, supportive people, who were always there for me.”

At 27 and just 4 years out of grad school, Weber’s insight into editorial illustration is sharp. His understanding of the trade, the constraints that art directors and designers are continually under, grew from his experience in OpEd at the New York Times. While still at SVA, Weber began illustrating for the OpEd page under Steven Guarnaccia and later worked one day a week as an assistant art director for Brian Rea. “The Times really shaped me at the beginning,” he says. “Illustration is very collaborative, that’s part of what I liked about it in the first place; the idea of working with someone else, being pushed in directions that are a little unexpected, challenging yourself and coming up with solutions that are potentially better than what you would have come up on your own.”
I've always enjoyed trying to hide my process, not because I’m secretive, but there’s a little bit of illusion, that sense of magic.”


Opportunities rose from his experience at the New York Times, and then things began to evolve organically. “Something I hit on in grad school was that I could indulge in my own interests and apply that to professional purposes,” Weber says. “When I started to explore my own subject matter, things that I was interested in, the vocabulary was more interesting.”

Wise beyond his professional years, the old adage, do what you love, has rung true for Weber. (And for Jillian, who works from their home while he's at the Pencil Factory.)

Weber works primarily by hand—80 percent. His idea generation is all pencil and paper. He moves on to acrylic, watercolor and ink, and then scans into Photoshop. “I love the computer as a tool, but I don’t enjoy working on it as much as I do on paper,” he says. “That last twenty percent I do in the computer turns it into something that’s publishable.”

Surprisingly, this accomplished artist admits he still struggles with the underdrawing, and the time it takes for him to build its structure, noting his slow process. What Weber laments, Antonio De Luca, former art director of The Walrus, recognizes as strength. “You can't ignore the labor that's gone into each illustration.”

De Luca captures the essence of Weber’s work eloquently, calling it biblical, spiritually uplifting and alien. “Sam has the ability to manipulate time, to create a plane where the past, present and the anticipation of the future exist simultaneously—as if something just took place or is about to happen.” Magic indeed. ca 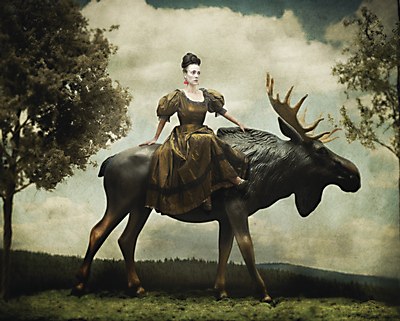 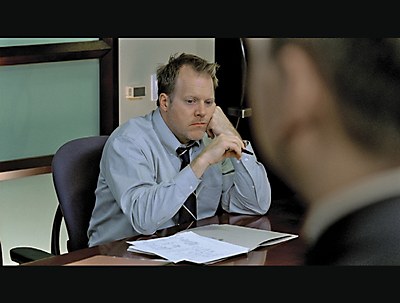 Features / Advertising
David&Goliath
A fearless agency in El Segundo, California, takes on cars, both real and toy, with a sharp wit. 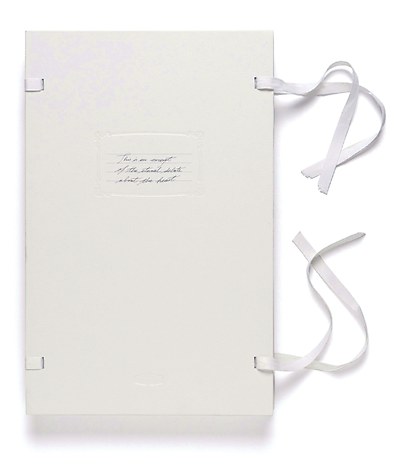