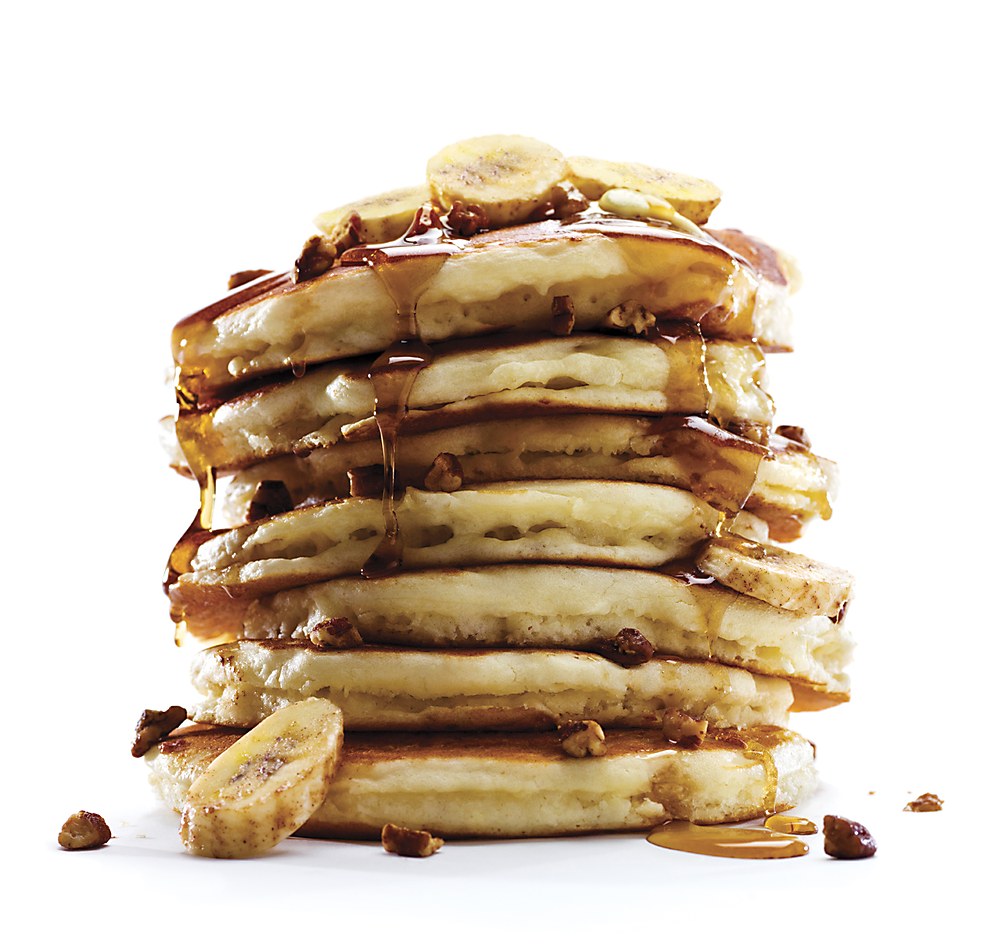 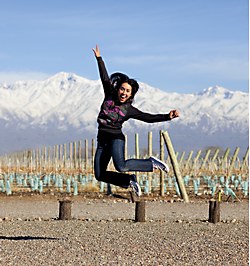 In food photography, there are those who excel at capturing the traditional, glossy plated shot, where seasonal greens, decadent tortes and succulent short ribs take center stage. And then there is Sara Remington, who makes food part of a larger story. She pushes food photography out beyond the plate, into our collective memory, where we are invited in, to sit at the table and experience not just the meal but to savor the conversation and the people around it. Her stories are cinematic in nature, sometimes abstract, unfolding in a manner that’s casual, real and sumptuous all at once.

One might assume Remington’s fresh approach is due to her bucolic childhood, and her experience assisting food photographers—which couldn’t be further from the truth. Rather its roots took hold around the dinner table in Upstate New York, and she’s never worked with a food photographer. 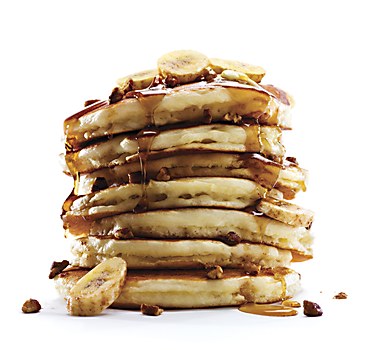 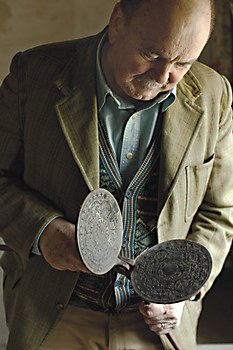 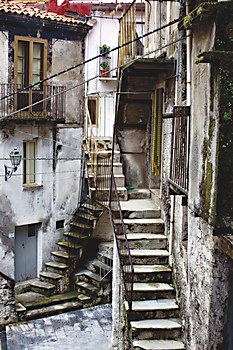 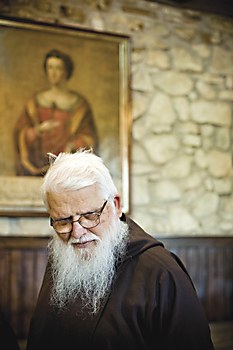 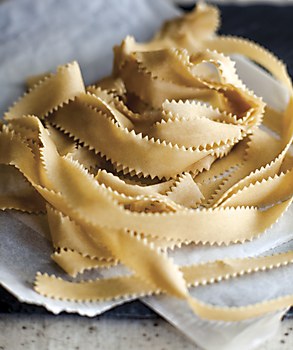 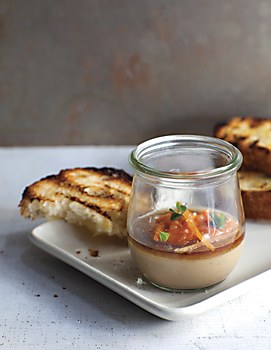 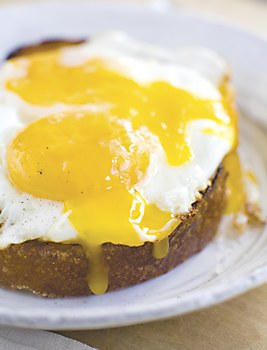 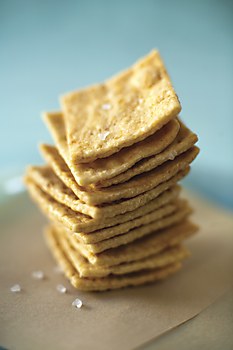 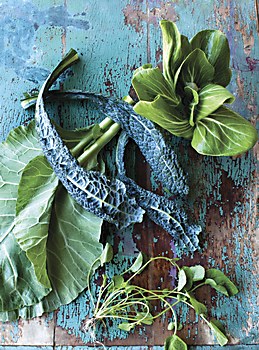 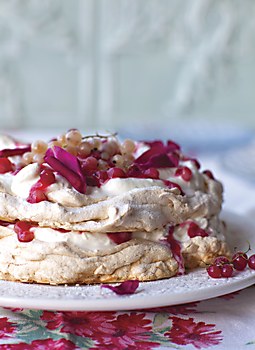 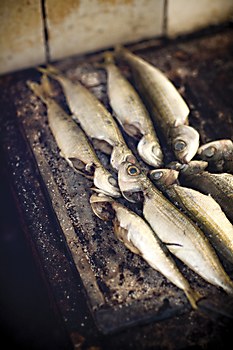 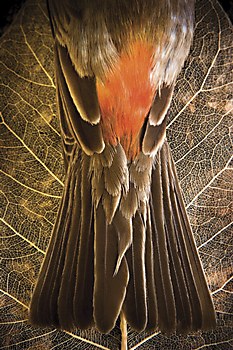 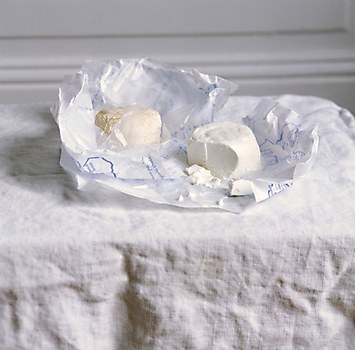 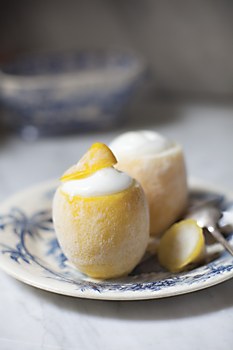 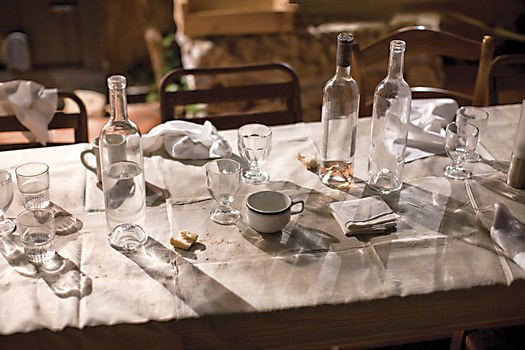 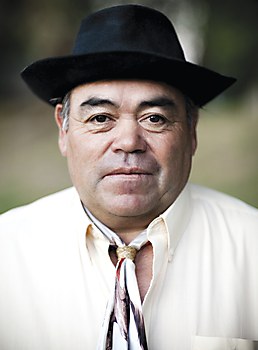 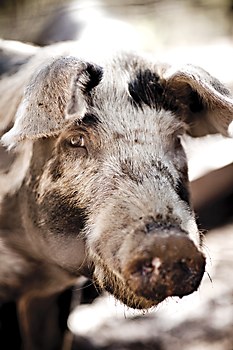 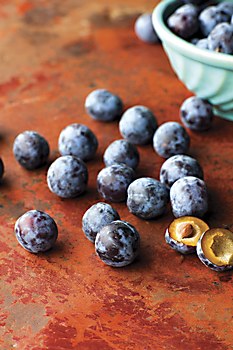 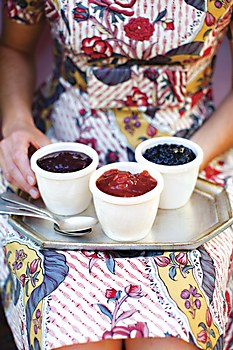 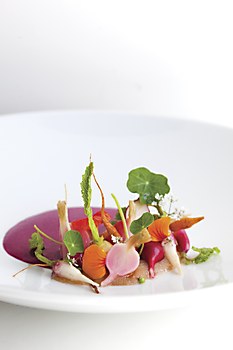 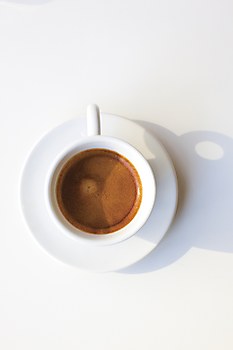 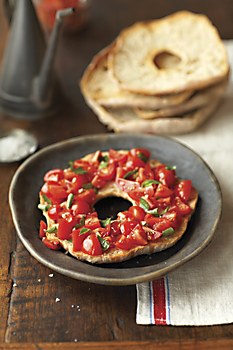 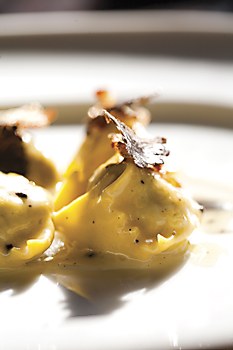 HOME AND MEALS
Remington grew up in Rochester, where her dad is an emergency room doctor and her mom stayed home to raise her and her sister. “Dinner was a constant,” she recalls. “I knew it was always going to happen at 6:30 every night. You need that in your life, to know that that one thing is going to happen. You might hate it, but you sit there for an hour and talk with your family. It’s just as important as having great food.” While her mom is a great cook, Remington says it was more about having a well-rounded meal. “As a kid, I thought you could get tomatoes year round. I remember the taste was bland and mealy.

“When I started shooting food, I discovered things, like the most incredible cherry tomatoes at the farmer’s market in August. It’s been a fun, new adventure that is childlike and playful.”

After high school, Remington went to Syracuse University, an hour-and-a-half away from home. There she tried computer graphics, but didn’t have the patience. Then she became a film major. But after spending night after night in the dark room, she changed her major one last time. At 22, fresh out of school, she packed her bags, drove to Los Angeles where her sister lived and left behind the snow and the accent—a hard, nasal “A” which is undetectable now.

SOAKING IT UP
It wasn’t just warm weather Remington was after when she moved west, “My goal was to get as many jobs as I could, to explore each one and see which ones I didn’t like.” Her first job, working in the archives of a small art gallery, may seem boring, but she loved it. “I love organizing. I’m obsessed with the Container Store. I wasn’t planning to work my way up in the company, but it was great.” This was followed by another gallery job; all the while Remington was assisting other photographers. “It was mainly celebrities,” she recalls. “I had no idea about food photography.”
It’s not just fish on a plate, there’s a painterly quality to it. If you treat it like a living being, then it becomes a completely different experience.”


Remington’s personal work echoed what she had done in college—conceptual, fine art. She cites David Lynch, Diane Arbus, Mary Ellen Mark and Eastern European stop-motion animation as inspiration. “I set out to be a photographer who worked for myself.”

In late 2004, Remington headed north to San Francisco, again with a specific aim. “I wanted to learn how a studio was run,” she recalls. “Running the business was more important to me than learning how to work a camera.” Remington got what she wanted, working as a studio manager for National Geographic travel photographer Catherine Karnow. “The amount of information I learned on a day-to-day basis was phenomenal—I almost felt like I should pay her! In school, you don’t learn how to deal with a professional crew, how to deal with clients, how to do simple things like invoicing.”

SERENDIPITY
It was quite by happenstance that Remington discovered food as a subject. “I was dating a chef,” she explains. “At the time, I didn’t even know what a food stylist was, but I was around the food community and knew what photography entailed. I was thrown into it.”

Sparked by her interest in Lynch and her conceptual work she created while in school, Remington began shooting food still lifes in a funky way. “I hadn’t looked at other food photographers, I didn’t know what I was setting out to do,” she says. But it was a turning point. Remington showed the work to a friend, which led to an assignment for a start-up magazine in Napa. A cover story on chefs, with a low budget, meant an opportunity for this new food photographer.

“I shot the plated dishes without an assistant or food stylist. It wasn’t all about the food, rather the chefs working with food from their gardens and markets,” she recalls. “I approached it as storytelling, the chefs themselves styled the food, and the food shots actually ran small.” Things snowballed from there. “That small cover story really opened my eyes to what direction I should push myself, how I could be challenged. Once it became about food and travel, I pushed all of my commercial work that way.”

In 2007, Remington received PDN’s 30 Award and used it to skillfully market her food and travel photography; she found her niche and went freelance. Today she’s shot over 25 books and her client roster includes Chronicle Books, Simon &amp; Schuster, Numi Tea, Better Homes & Gardens, Real Simple, among many others.
“I'm glad I’ve never worked with food photographers,” she admits. “To know that there’s a traditional way to do things and to step out of that is difficult. I approach food as an object, studying the way that light and color interacts with it. It’s not just fish on a plate, there’s a painterly quality to it. If you treat it like a living being, then it becomes a completely different experience.”

Eric Stein, executive creative director at Witness, concurs. “We chose Sara to work with us on assignment for one of the Cheesecake Factory brands, Grand Lux Cafe. Our concept called for shooting the food as if it were a piece of jewelry,” Stein explains. “When interviewing photographers, Sara stood out clearly as being comfortable taking some risks, as this is typically not the most flattering way to approach food photography. There were no other props to hide behind—just the food (not even a plate). She came back with inspired ideas that ultimately led to a wonderfully successful shoot. In the end, the food product literally seemed to have ‘facets.’

“In Sara, what I find most inspiring is that she is very much about pushing boundaries.”

LIGHT THERAPY
Floor-to-ceiling paned windows dramatically frame Remington’s Emeryville studio/loft in a former WWII submarine repair factory. The windows face north and south, so the studio never gets direct light—a boon for Remington, who likes to shoot with natural light of which there's no shortage. The pristine kitchen in stainless steel and avocado green opens into the sparsely furnished space that, as needed, promptly fills with people, props and culinary delights. Remington lives in the loft above, which she admits provides little escape when she's shooting 30 dishes for a book—6 each day for a week translates to 5 days without leaving the studio except for checking the mail.

“When you’re on set, there are clients, then food stylists and prop stylists. There are so many people, and everybody’s collaborating. You have to be on your feet. Always be in a good mood. Having people trust you.” Lisa Matthews, art producer for Team One, who worked with Remington for Häagen Dazs, remembers, “Sara was extremely professional, very accommodating and, most importantly, always had a smile. She made a scoop of ice cream become a piece of art.”

It’s challenging, and Remington loves it. Especially when the chemistry is good. And it is good with prop stylist, and friend, Ethel Brennan. They have worked together on several cookbooks, most recently The Blue Chair Jam Cookbook that was nominated for a James Beard Award for photography. As a team, they’re in sync, a bit freeform, less art directed.
Sara was extremely professional, very accommodating and, most importantly, always had a smile. She made a scoop of ice cream become a piece of art.” —Lisa Matthews


A conversation during a shoot revealed a surprising similarity between the two—both women grew up spending their summers in France. In the 1970s, Brennan's parents bought a goat farm in the South of France, so Ethel spent summers traveling around the country. Remington remembers, “My dad felt it was important to take time off to travel, and as an ER doctor he could. He had gone to school, and still had friends, in France. So the four of us took road trips and—not to a fabulous chateau in the South of France—we stayed in cheap motels and ate in cafeterias. It was great.

“Ethel and I discovered we have these childhood experiences that connect with food, being at the table with family in France—memories important to our upbringing. So when Ethel said, ‘Let's write a book!,’ I said ‘OK.’

“It was casual and made sense; we put a proposal together, submitted it to Andrews McMeel Publishing and they came back with a ‘yes,’” Remington says with a smile.

Paris to Provence will be photo heavy, and the authors have strong opinions about it. “It won’t be, here’s a plated dish, a recipe and a picture of a little girl holding berries,” explains Remington. “Instead it will be an esoteric portrayal of a childhood. I am shooting lower to the ground, so things appear a little surreal and larger...when you see something as a kid and you remember it, it’s so big and beautiful. So it’s a dreamy, poetic armchair tour—with recipes.”

Remington, who daydreamed a lot as a kid, says it’s about the whole experience. “Eating at a table outside, you don’t necessarily remember what you ate, but you remember how you looked off to the side and caught the little ruffle of a dress blowing in the wind, which mixed with the green grass...that’s what we’ll replicate, tiny details of a situation that take you back to the food.”

It takes us back in a manner that is playful and powerful at once, unfolding into a narrative where food is part of the story, but not the whole story. It’s no surprise that this energetic, determined 32-year-old is already working on her dream job. “To do your art, get paid for it and you call the shots. That’s the ultimate.” ca 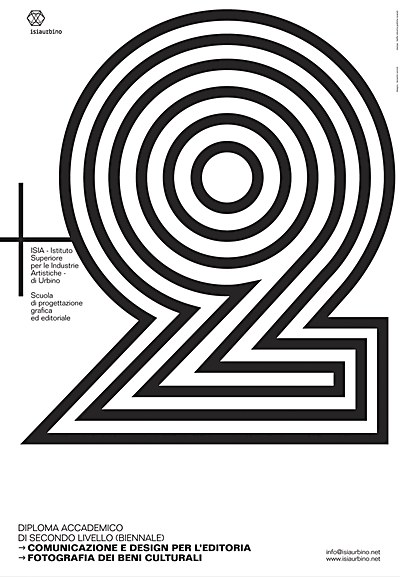 Features / Design
The 17th Annual Colorado Poster Exhibition
A selection of posters from around the world. 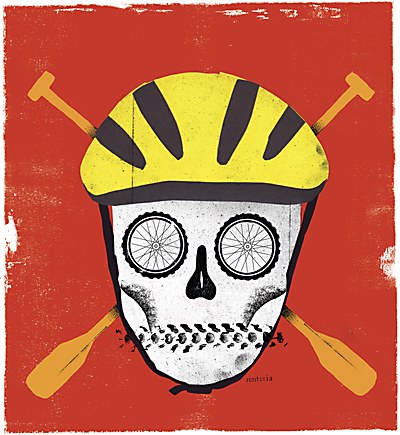 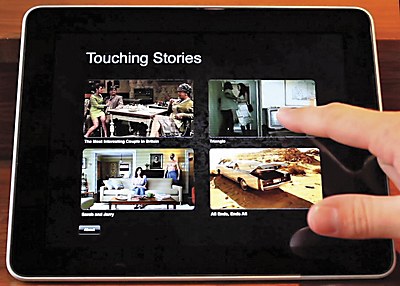