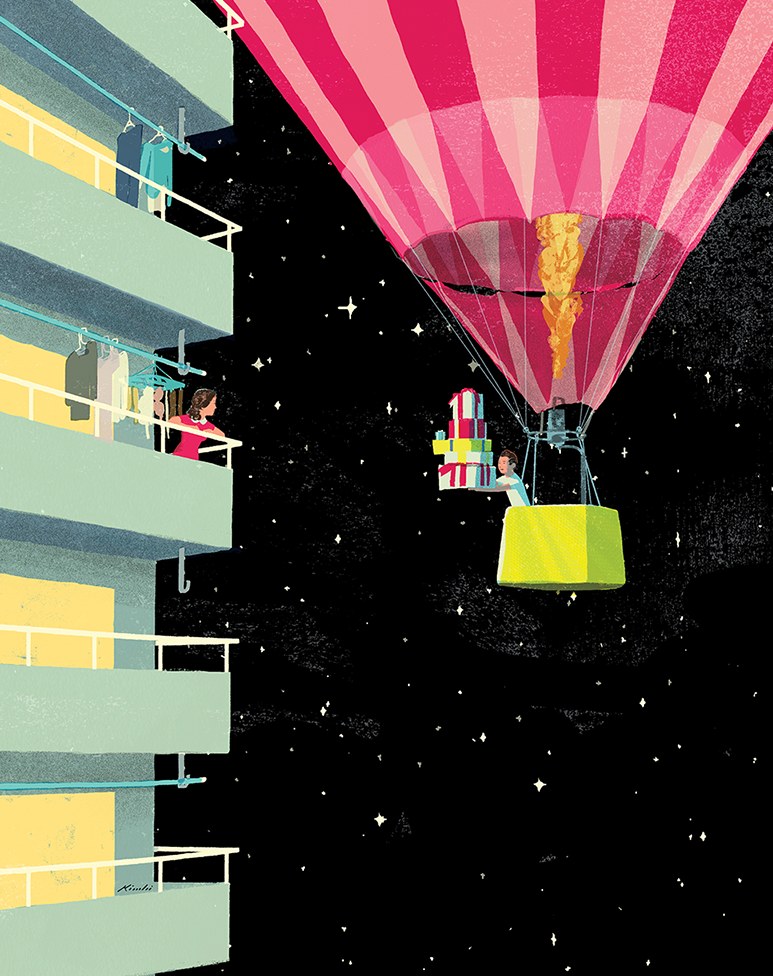 Tatsuro Kiuchi loves old things. His Tokyo Studio, Pen Still Writes, is strewn with oddities picked up from online trawls. An old library card catalog case that he has refashioned into drawers. Vintage glass showcases filled with model cars and American advertising memorabilia (a miniature Kool penguin, an oversized, ceramic Planters peanut). There are shelves of books, among them dozens the illustrator has worked on during his 27-year-long career. On top of the cases are some stacked paper coffee cups— Starbucks ones with Kiuchi designs from the coffee chain’s 2007 holiday campaign. Industrial lights hang from the ceiling. It looks like he’s running a cafe, I tell him.

“I did have an antique shop for a few years, but it didn’t last long,” he says.

At 53, Kiuchi is boyish in an earnest, unguarded way. He dresses comfortably and casually and has a scruffy chin. His affection for the past makes sense when you look at his work, which has a nostalgic feel to it. Something about his use of tone or texture that seems not quite of this moment, or of any particular moment really, unrooted in both time and place. He assures me that I’m not off the mark, that he sees what I’m saying. He just can’t explain how he has arrived at this particular aesthetic, or why he is so drawn to old stuff.

He gives it a pause, thinks and then shakes his head with an apologetic laugh—“I really don’t know.” 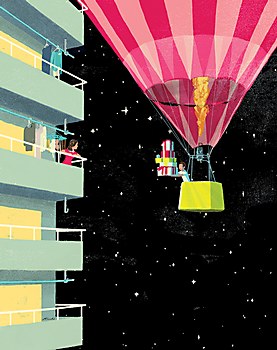 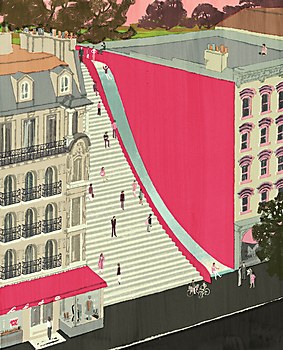 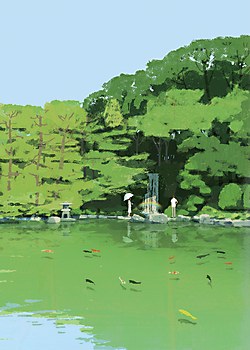 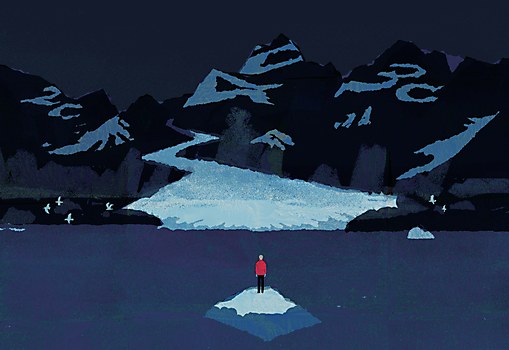 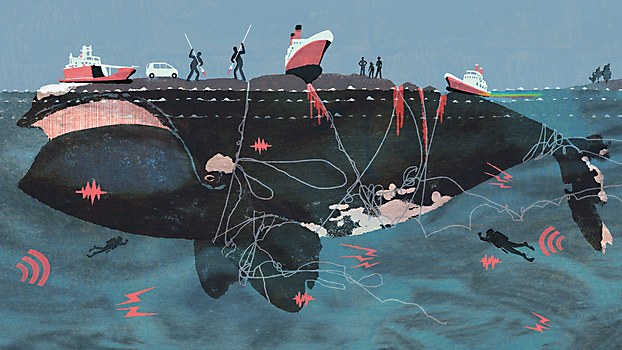 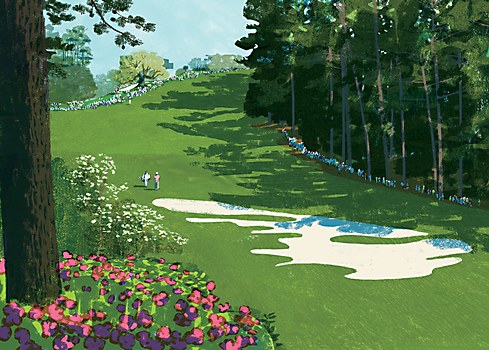 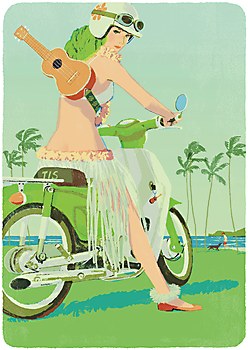 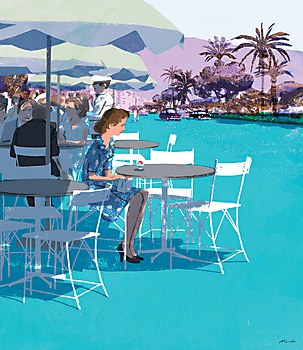 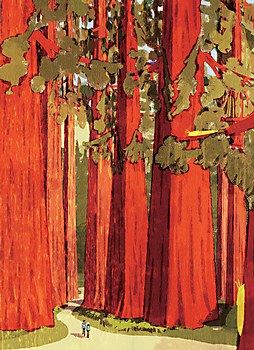 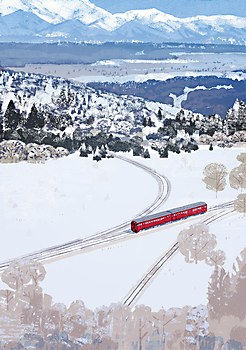 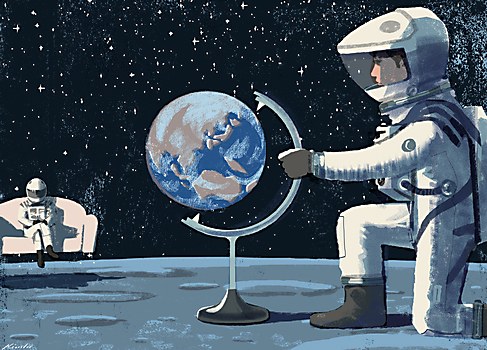 Kiuchi rolls with it. “Yeah, you’re right. I don’t really like plastic.”

“You like stuff that keeps its value over time.”

“Stuff that develops flavor over time.”

And there he stops. It’s not Kiuchi’s style to overanalyze things.

He’ll show anyone his process. He doesn’t conceal anything.” —Hiromichi Ito

Long fascinated with the natural world, Kiuchi studied biology at Tokyo’s International Christian University. Over summer break his sophomore year, in 1986, he traveled around the United States for the first time, visiting a friend in New York City and then taking the Greyhound bus by himself to Niagara Falls and Chicago.

“I fell hard for America on that trip. At the time, America was a really aspirational place for a lot of Japanese,” he says.

By the time he was finishing up his degree, he knew that he didn’t want to continue in the sciences. (Too many formulas, not enough living creatures.) He’d long been a reader of influential Japanese magazine Illustration—a bible of sorts for aspiring commercial artists—and had taken some drawings around to publishing houses. None were accepted, but instead of being defeated, he was determined to study. Or to at least get it out of his system. And if he was going to give it his best shot, he wanted to go all in and study overseas.

He wound up at ArtCenter College of Design in Pasadena— his top choice—graduating with a BFA in illustration in 1991. (Pasadena’s famous Rose Bowl Flea Market, meanwhile, is where he would first encounter his beloved “junk.”)

Back then, his medium of choice was oil painting, which remains his first love. In a corner of his studio stands an easel and canvas, which he indulges in his spare time. His favorite subject is his Shiba Inu, Chai (short for Tchaikovsky).

“N. C. Wyeth is where it all started for me,” he says of his early influences. He also studied directly with the late, great Phil Hays at ArtCenter.

“From oil painting, I learned about color, shadow and light, and I think that influence still lives on in my current work.”

Kiuchi’s first commissions, in the 1990s, were children’s books, all done in oils—dramatically different from his contemporary work, created entirely in Photoshop. In the early aughts, he began playing around with the photo-editing software, then in its infancy, as a cost-efficient and mess-free way to experiment with color combinations for his paintings. He then hit upon a novel use of the program: layering color elements, one on top of the other, in the same fashion as printmaking. He’d never formally studied printmaking, no more than what was covered in elementary and junior high school art classes, but he was pleased with the effect and the process.

Aside from his knack for composition and his ability to draw anything, there is an inherent stillness in Tatsuro’s work that imbues an image with a sense of thoughtfulness and contemplation.” —Nathan Huang

What began as play became his signature style. He’s since been commissioned by newspapers like the New York Times, the Guardian and The Washington Post; publishers such as Simon & Schuster and Kodansha; and major corporations like Sony, Panasonic and Japan Airlines. He’s also done a stamp for the Royal Mail, a career highlight, and his work has been recognized by American Illustration, Communication Arts and the Society of Illustrators.

“What’s great about digital is that you can adjust colors afterwards. So first I block things out, using local colors, and then when I finish it, I might add some filters. Or see what happens if, say, I change the color of the sky to pink,” Kiuchi says.

“Definitely digital media freed up my use of colors. In oil paintings, I tend to use warmer colors, more earth tones. Reds, oranges and yellows. But when I started doing digital paintings, I tended to use blueish colors—so there was a shift there. It’s easier for me to use more saturated colors in digital.”

At his desk—a drafting table purchased from a local antique store—Kiuchi brings up some examples of his work. An early cover that he did for a Japanese novel, The Wind of Washington Heights. A more recent spread for Golf Digest magazine. Though he may sketch some works out on paper first, he usually draws directly on a tablet using just Photoshop’s brush and eraser functions. Each element is its own layer, he explains. And then with a few clicks, he starts deleting, distorting and rearranging things to demonstrate how he goes about creating a composition. A woman grows tall, Alice in Wonderland–style. Trees are defoliated, only to reappear in the first flush of spring green.

I’m visibly pained to watch him mucking up his works for me, but he just shrugs.

Here is another thing you need to know about Kiuchi, Ito notes: “He’ll show anyone his process. He doesn’t conceal anything.” This is true—he posts videos of his works in progress on his website, and step-by-step photos on Instagram. He also teaches illustration classes at a course run out of landmark Tokyo bookstore Aoyama Book Center.

Color is the most immediately striking aspect of Kiuchi’s work, and it is clear that he has fun with it. Less obvious, but just as critical, is his use of texture. He goes about this in novel ways, too. He moves from desk to table to show me how he creates raindrop patterns on palette paper with watered-down acrylic, brushing it on in broad strokes, watching it bead up and waiting for it to dry (after which he’ll scan it). A thicker coat of paint, on a page of a Moleskine notebook, is smooshed together to create a Rorschach-like blob, which, improbably, when scanned looks like the peaks and valleys of a drone shot of a mountain range. (And even more improbably, the same image can be stretched to resemble wood grain.) In this way, he continues to experiment.

“You can create textures within Photoshop too, but it all looks the same,” he says.

Kiuchi’s techniques allow for more irregularity and singularity, which gives his work that handmade quality—something he values.

In his own work, he says, he aims “for a kind of elegance, but also for enjoyment.”

Nathan Huang, an art director for the New York Times who has commissioned Kiuchi, recalls his first impression of the illustrator’s work.

“I remember being floored by the sheer beauty of Tatsuro’s artwork, particularly the way he was able to capture a scene or space while also reducing its elements to beautifully composed shapes,” Huang says. “Aside from [his] knack for composition and his ability to draw anything, there is an inherent stillness in Tatsuro’s work that imbues an image with a sense of thoughtfulness and contemplation.”

Kiuchi is adamant that his work doesn’t have any sort of message. “My work is there to support the writer, to draw the reader’s attention,” he says.

I point out that in this case, it’s the opposite. That in this profile, my words will be serving to back up his illustrations.

“You can just write nothing,” he says, laughing.

“Turn in a blank document?”

Rebecca Milner writes about people and culture. She’s lived in Tokyo since 2002. 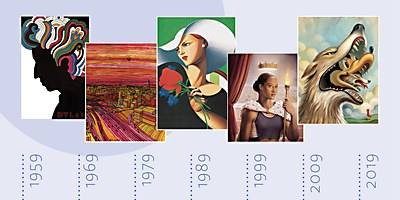 Features / Illustration
60 Years of Illustration
A sampling of work and commentary by some of the illustrators who have been featured in the pages of Communication Arts. 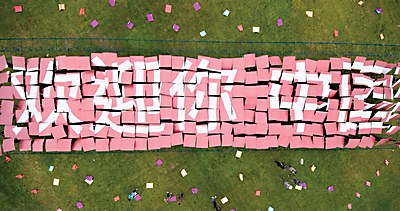 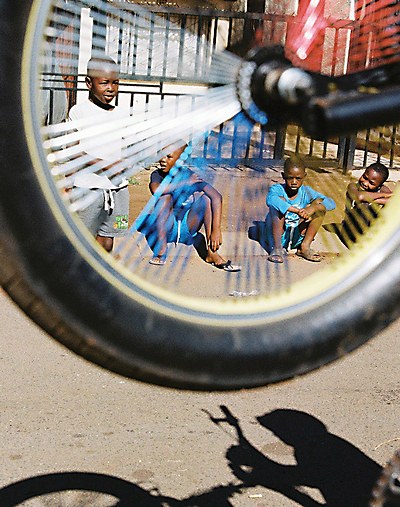