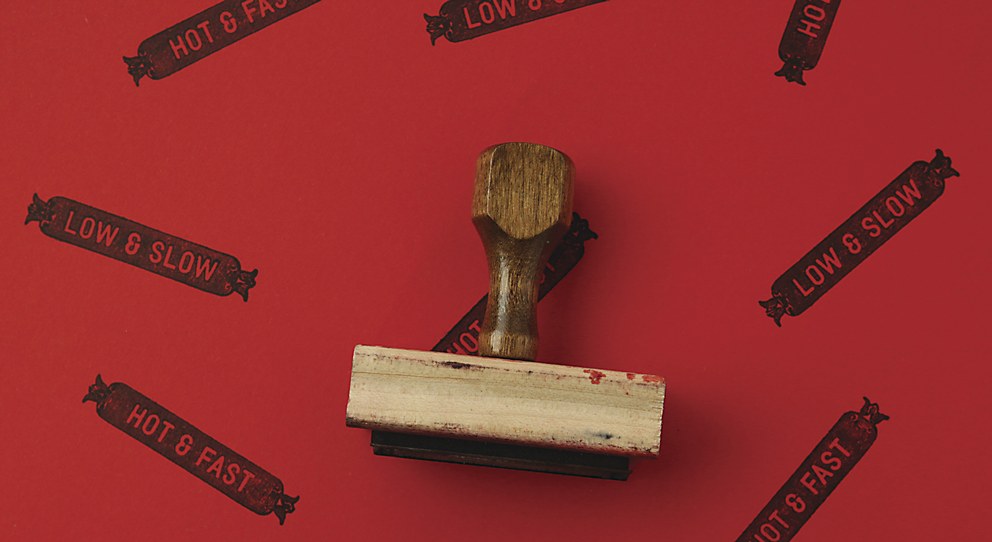 By Sara Distin
The Made Shop’s actual shop is a garage behind the Denver home of principal designer and founder Marke Johnson and his wife, Kimberly Johnson, the studio’s owner and manager. The space’s makeshift materials—the interior is lined with plywood, one wall is covered in chalkboard paint—attest to the Made Shop’s working philosophy. As a studio that specializes in “making things we don’t know how to make—yet,” the Made Shop team is always learning. Theirs is a future-forward promise that, like the future itself, is exciting—and, potentially, daunting.

Smiling, Marke tells me, “An important question we’d ask a poten­tial hire is, ‘How comfortable are you being uncomfortable?’”

The Made Shop is a tight-knit but growing community. Marke and Kimberly have been married for fourteen years. The backyard location lets them be close to their young kids. The shop’s art director, Nathan Johnson, its artist and illustrator, Zachary Johnson, and Marke are brothers. Designer Adam Blake played in a high school garage band with Marke, and project manager Amber Chiarelli is married to a good friend of Kimberly and Marke. If clients aren’t already friends or family, they often become so or, at the very least, long-term collaborators.

With the exception of Chiarelli, the Made Shop team has been making things together for years. Nathan, Zachary and Marke made music as part of an experimental artistic collective, the Cinematic Underground. Marke created the handbills, posters and other artwork to promote the band, and Kimberly managed the business side of things. While on tour for a year in a vegetable oil–fueled, silver skull–emblazoned school bus nicknamed the Destroyer by its previous punk rock owners, the kindred crew honed the skills they’d need for their next endeavors: figuring it out as they went along.

Based on the artwork for their band, they began to pick up the work and clients they’d need to formally create the Made Shop and make a business out of making things together. Now the shop’s client list includes Adobe, Sony, the National Football League, Levi’s, Tumblr, Stranahan’s Colorado Whiskey, Hangar 1 Vodka, Yoko Ono, the Fray, Joe Coffee, the Nickel at Hotel Teatro in Denver and many others. Their portfolio extends from art direction, design, branding and packaging to architecture and interiors to music videos, commercials, books, and other assorted media and ephemera. For all of these projects, the garage space enables the Made Shop to bust out saws, spray paint and smoke bombs when the need arises. Stepping away from computers, away from the fluidity and efficiency of technology helps the Made Shop thrive. 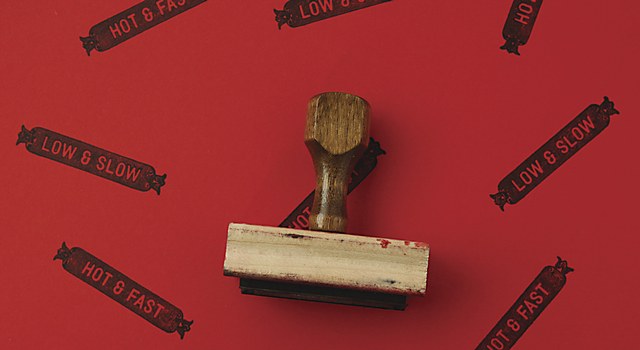 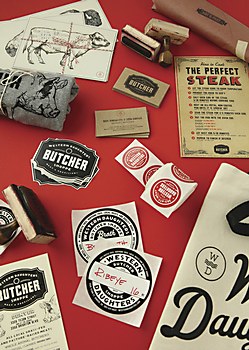 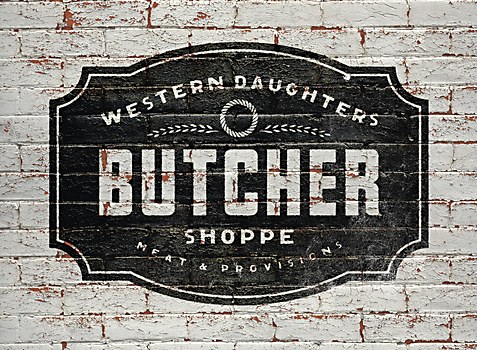 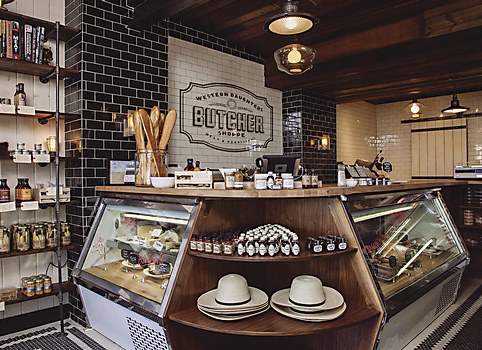 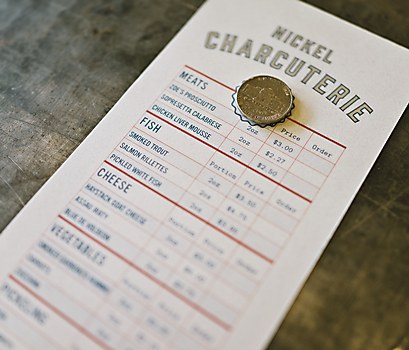 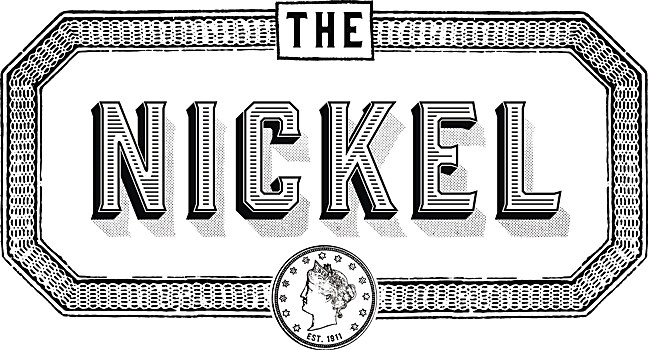 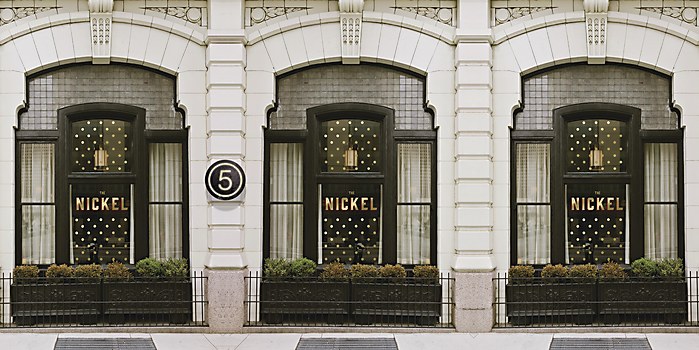 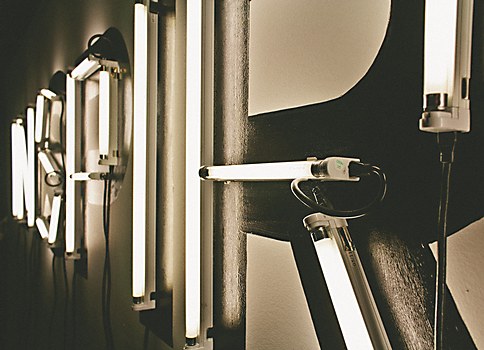 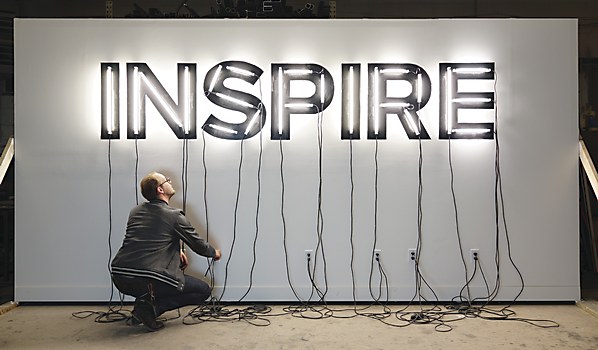 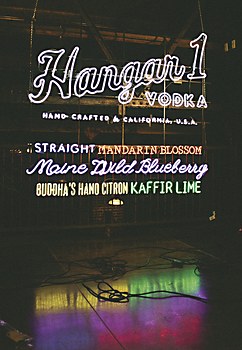 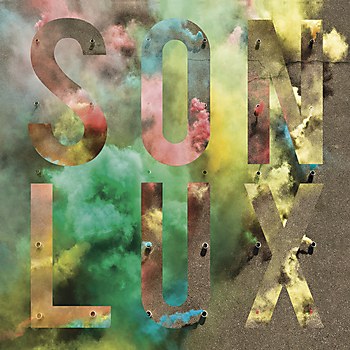 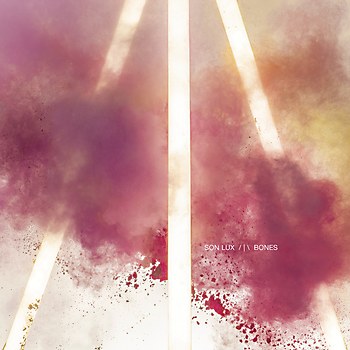 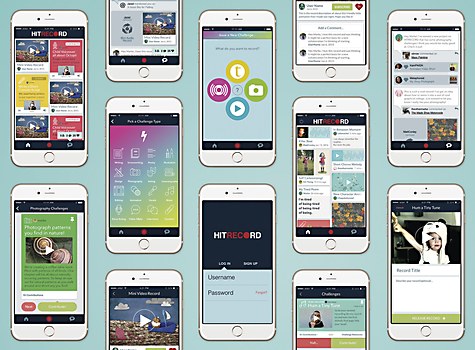 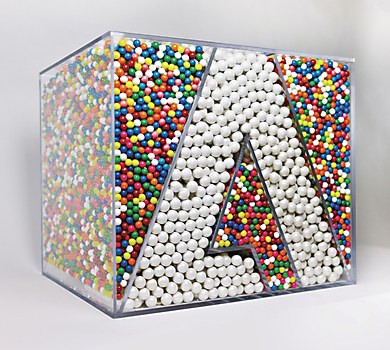 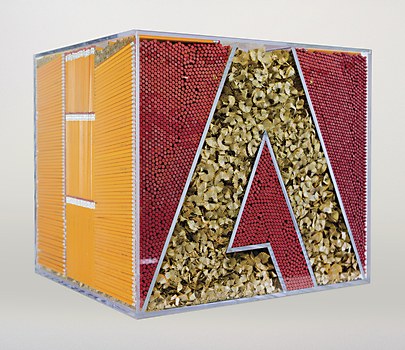 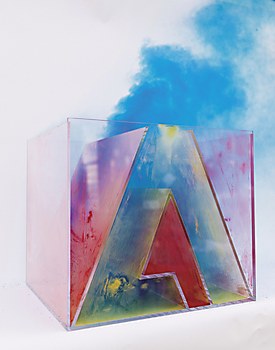 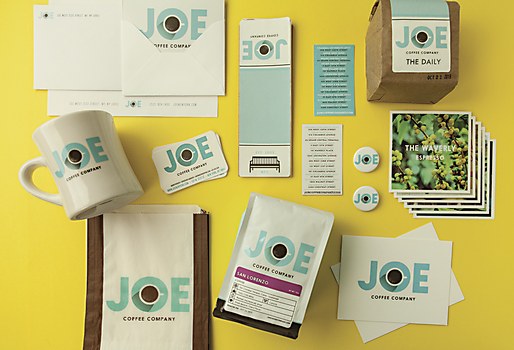 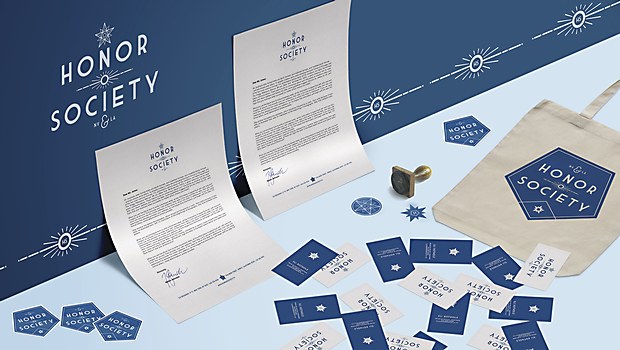 The smoke bombs, 28 of them, were detonated to produce an ephemeral field for hard-edged type on the album cover for Son Lux’s We Are Rising. In keeping with the spirit of the album, which was written by Ryan Lott in 28 days, the Made Shop confined its work—including the build-out, photo shoot, final design and layout—to 28 consecu­tive hours. Their next cover, for Son Lux’s Bones, combined ethereal puffs with corporeal spatters of color. Its cre­a­tion required a pyramid of fluores­cent tubes, balloons, Holi powder and blow darts. After those successes, Lott knew he wanted the Made Shop to be an integrated part of his team, describing them as family.

The Made Shop went on to write, direct and produce two music videos for Son Lux. In a video of the making of the first, Nathan mutters, “I swear, every project starts with a trip to the hardware store or the art store.” This time, for the song “Change Is Everything,” he was looking for what would end up being sturdy thread, pushpins and foam core to make what would be a rotoscoped, stop-motion video. At that point, though, not only did Nathan not know exactly what he was looking for at the hardware store, but he also didn’t know what rotoscoping was. He stumbled onto the live-action tracing technique as a solution for the video’s time and budget constraints.

For its second Son Lux video, the Made Shop ventured even further out of its element. “You Don’t Know Me” is a full-blown studio production, with 25 people on set, including actor Noah Segan (Looper, Brick) and Orphan Black star Tatiana Maslany. With self-deprecating humor, the Made Shop team admits they had to learn some new vocabulary to pull it off: “gaffer” (turns out it’s a person, not a piece of equipment), and, perhaps more important, “10-1” (the code for announcing a bathroom break).

Although the technical aspects of both videos are impressive, the Made Shop also marries its impeccable craft with elegant ideas. For the We Are Rising cover, they aligned their creative constraints with Lott’s. “In ‘Change Is Everything,’” Lott notes, “they took the idea ‘change is everything’ and figured out a way to make change itself everything.” It’s simple, but effective: a line drawing comes to life as change happens incrementally over each of the 4,000 handmade frames.

I swear, every project starts with a trip to the hardware store or the art store.” —Nathan Johnson

The space beyond the bounds of possibility is the Made Shop’s haven. As Marke describes it, “Normally, you think of your sweet spot as an area you feel very skilled at and efficient in, but for us, the sweet spot is when we’re doing something we’ve never done before.” He relates to the Eames studio as described by Richard Saul Wurman, “Sell your expertise and you have a limited repertoire. Sell your ignorance and you have an unlimited repertoire.”

This way of working is more than marketing. Forging into terra incognita is the team’s tactical strategy for growth. Marke describes the process as “painting the bull’s-eye.” He elaborates:

If you’re really good at something, you can hit a target you can see. But what’s more fun is shooting arrows all over the place, into places you can’t see, finding the arrow and then drawing the target. But once you’ve found it, you have to aim at it and put all your skills toward that one goal.

The Made Shop invests not only all available skills in the goal, but also all its people—including clients. Mutual trust and respect are significant aspects of the Made Shop’s working relationships. The role of designers as hockey players trying to slip a good idea past the client/goalie doesn’t apply. Instead, the Made Shop thinks of clients as co-conspirators. At the beginning of projects, they’ll often send clients a selection of very early, very rough, very conceptual ideas—a few arrows shot off in the dark. Given his previous experience at agencies, Blake initially found this step terrifying. It could feel like passing off the design work to clients, letting them pick the best idea or—worse—exposing the bad ones. But he now credits it, and Marke in particular, for bringing everyone to the same side of the table. When everyone’s in on the process and aware of the risks and rewards, it’s a little less scary and a little more exhilarating. The Made Shop gets space to breathe, and clients can exhale. All that air gives a project the lift it needs to soar.

Denver-based poet and writer Eleanor Perry-Smith admires the Made Shop’s transparency, even when it makes mistakes. She hired the shop to design a logo and stationery to help define her business. She says, “The Made Shop wears their creative experimentation as a badge of honor. That had an impact on me. I now value the display of error alongside excellence.” But still, the resulting work has to be strong. Of that, Perry-Smith says, “The best part is seeing the misshapen clay of your idea become sculpture.”

Normally, you think of your sweet spot as an area you feel very skilled at and efficient in, but for us, the sweet spot is when we’re doing something we’ve never done before.” —Marke Johnson

Longtime client Jared Geller credits the Made Shop with clarifying and articulating ideas in a way “that has resulted in a greater understanding of who we are and what we’re doing at hitRECord.” Geller is the executive producer for hitRECord, a collaborative production company founded by Joseph Gordon-Levitt, for which Marke serves as the creative director. From its vast and diverse pool of contri­butions, hitRECord has produced books, short films, a commercial for LG and an Emmy Award–winning tele­vision show that’s now in its second season. Gordon-Levitt is proud of the project and its success. As he describes it, “It’s personal. It’s honestly something I love, and I get to work with people I feel familial toward.” For Marke, the feeling is reciprocal. He calls Geller and Gordon-Levitt friends and mentors.

Although the Made Shop essentially collaborates with thousands of people around the world through hitRECord, building community locally is just as important to them. The Made Shop is especially pleased with its work for Denver’s Western Daughters Butcher Shoppe—with projects that cover architecture, branding and design work—because it’s a business they can walk to and support in person. Western Daughter co-owner Kate Kavanaugh describes working with them: “They invite you into their process and into their lives and their space, in a convention of business that is rarely practiced anymore.”

The Made Shop has also invited the greater Denver creative community into their lives and space with a summer event called Make & Tell. As Chiarelli describes it, it started with a Friday Free Day, when everyone could spend the day working on whatever they wanted. Just as Google once encouraged employees to spend time on their own creative projects, the Made Shop decided 20 percent of its staff members’ time should be spent on personal work, with one distinction. It had to be something that wouldn’t make them money. Because they were working on things that might not see the light of day, they got curious about what other creatives had in progress. So they launched Make & Tell, informally at first, inviting friends to bring anything they were working on. They deemed it a success at the last event when they didn’t know anyone who presented work.

The Made Shop’s success might be best described by Perry-Smith, who says, “I went in for a logo and came out with a community.” The shop’s secret is actually not so secret: the future is here. And thankfully, we’re all in it together. ca

Sara Distin has written about art, photography and design for AIGA, TIME and Flavorwire. She is an editorial consultant for kids’ app company Tinybop. Previously, she worked as an editor and curator for affordable art site 20x200. 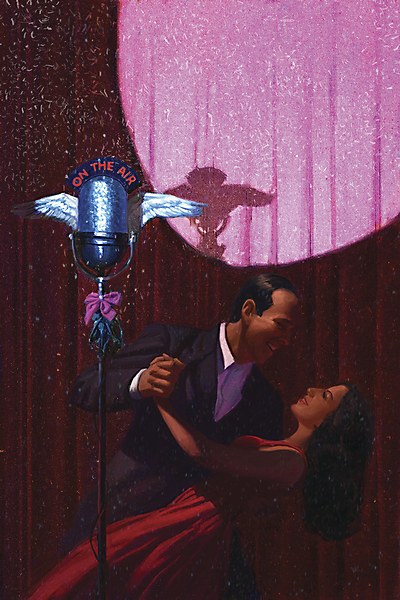 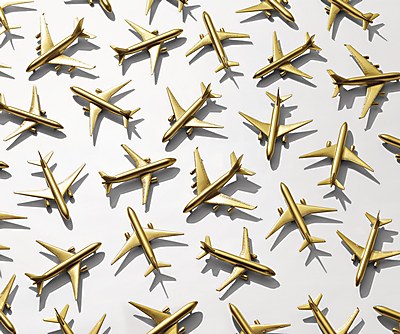