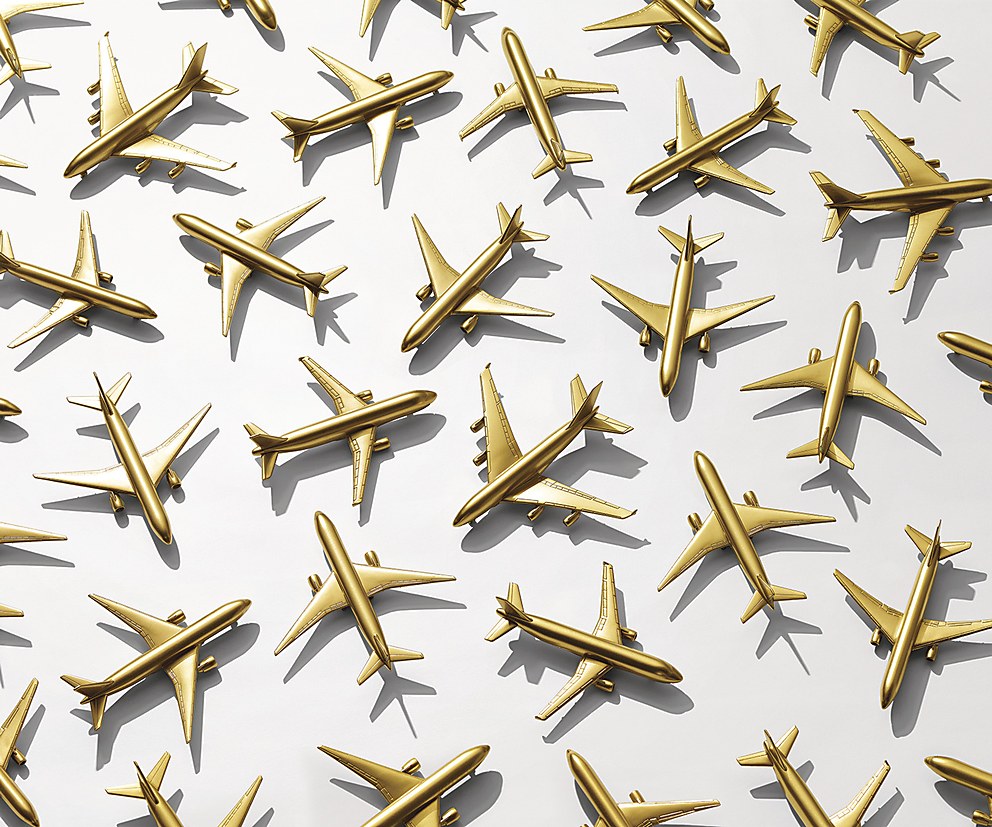 Behind the scenes of this Austin, Texas photography studio, a “MacGyver” couple rigs ingenious sets full of humor, action and beauty.

It’s an uncommonly calm day at the Voorhes studio in Austin. Blue sky shines through the windows of what was once a gospel church, onto iMacs and reams of colorful back­ground paper. One small project sits at the center of the big room, and barely a buzz hums from the lighting equipment, which stands in place of pews. The bulldogs, Lefty and Lucy, pant loudly, but neatly sidestep all electric cords. They’re very respectful unless it’s a food shoot. Today, it’s almost the opposite: teeth.

Dark, broody teeth, cracked and lit dramatically for a Texas Monthly feature on forensic science: teeth meant to suggest that something has gone very, very wrong. While photographer Adam Voorhes futzes with the light setup, considering a slip of shadow with a thoughtful expression before shifting a piece of equipment imperceptibly to the left, studio producer and stylist Robin Finlay crouches near where the church altar once stood and slams a set of plaster teeth against the floor. They’re not breaking right, so Finlay dives into her prop room—a riotous jumble of paint cans, pillboxes, a plastic skeleton, and bins labeled “fireworks,” “classic toys,” “assorted toys” and “more toys”—and returns with a tiny hammer and chisel. More smashing ensues. Eventually, she carries the damaged goods to her husband, presenting him with the day’s first photographic subject. “These teeth are fu-u-ucked up,” she says, sounding satisfied.

This isn’t the studio’s first stint with teeth. A few years ago, on another shoot for another magazine, the story was on cosmetic dentistry, where all was meant to go right. The Voorhes set the molds against a cheery yellow-and-gray background and kept the teeth intact.

In the work of still life photography, some objects resurface again and again. For the Voorhes, it has been teeth, eggs, globes and stacks of cash. It’s the studio’s job to make these objects beautiful, of course, but it also must make them thought provoking, inventive, fun—it must create an image the eye can’t drift past. This is what Voorhes and Finlay, photographer and prop stylist, husband and wife, bold and imaginative creators of concept-driven still life, do best: take common objects and make them, somehow, new.

“He complimented her shoes, she wasn’t buying it,” reads the first line of their website bio. “That was the beginning.” There’s another version of that story. Fresh to her art director post at Austin Monthly magazine, Finlay was furious with Voorhes for ruining her layout—how, she can’t remember. She does remember her editor’s urgent aside to her: “You need to be nice to that guy!” and watching that editor follow an offended Voorhes out to the parking lot. “We don’t have many strong opinions,” Voorhes says now, “except about our work.” 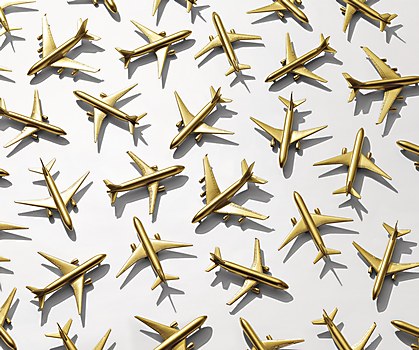 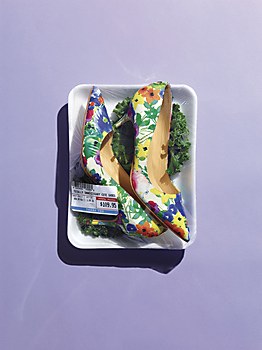 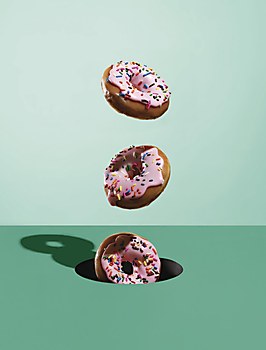 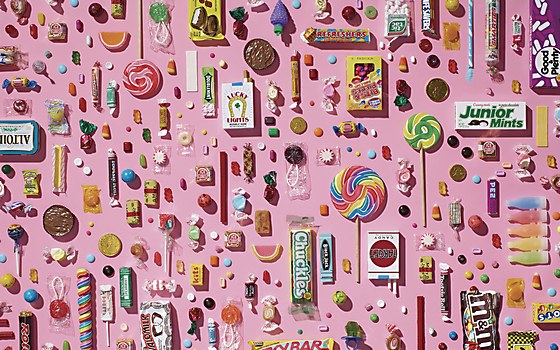 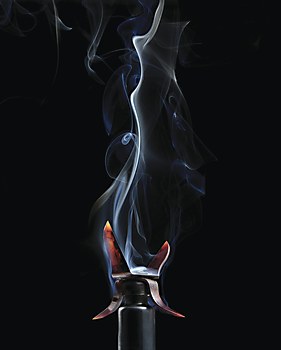 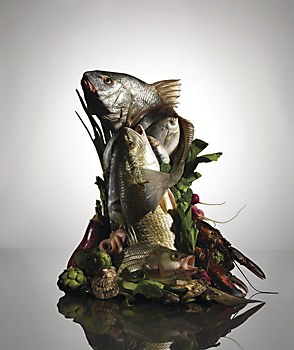 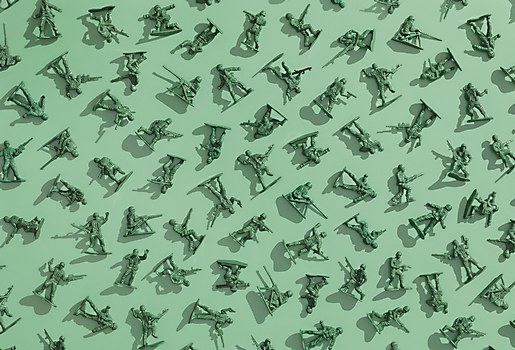 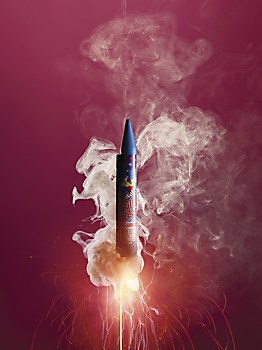 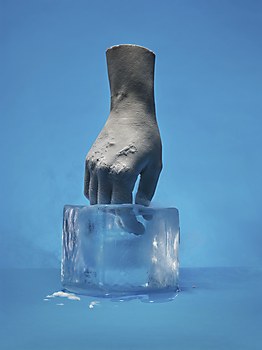 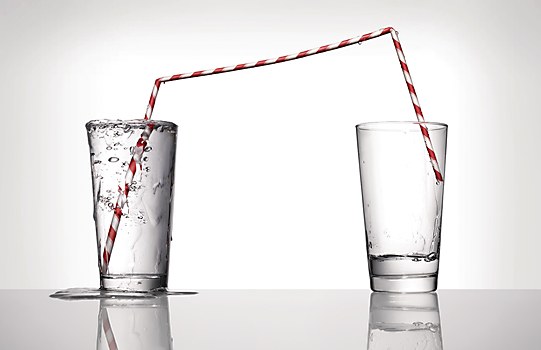 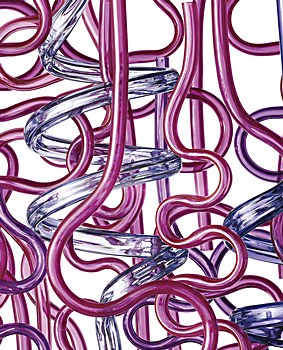 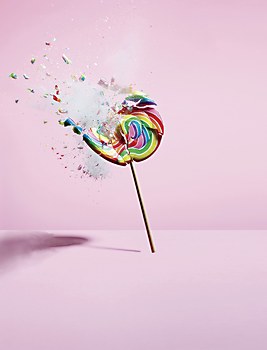 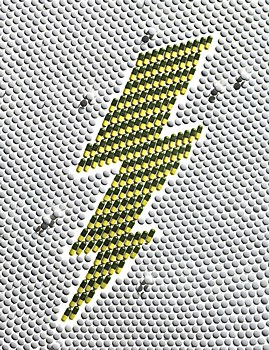 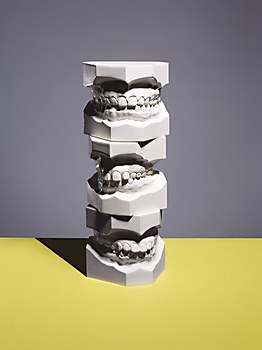 A true child of Silicon Valley, raised in the 1990s dot-com boom, Voorhes approaches his work like a scientist. Already building websites as a teen, he was drawn to photo­graphy by the challenge of manipulating a large-format camera and the darkroom chemistry involved in his high school photo lab. “He’s the kind of guy who loves to tinker with things and analyze the shit out of things,” says Matt Rainwaters, a fellow photo­grapher and close friend who studied with Voorhes at the Brooks Institute. “He can just see light and study light in such a technical way. He’s like a physicist and a photographer.”

Still life photography was a natural fit. In school, Voorhes most admired the studies of texture, shape and light by Edward Weston, with his gnarled bell peppers, and Ruth Bernhard’s nudes —work where you’re not finding a scene, Voorhes says. “You’re creating one.”

Finlay had a different kind of schooling. Her small-town Texas high school had no arts program. Though she studied interior design and graphic design at Texas Tech University, prop styling never entered the picture—at least not directly. But her dad, a farmer and a rancher, taught himself to weld just to forge the right plow. He rigged elaborate pulley systems while his daughter looked on. “When he couldn’t find a tool he needed, he’d make one,” Finlay says. “There’s no school to go to for that.”

After school, Voorhes worked as a camera assistant in New York—for a tyrannical photographer who once yelled at an assistant when clouds passed across the sun—before taking a job in Austin with a stock photographer. The photographer’s contract fell through four months after the big move, but Voorhes decided to stay and start his own business. The people were nice, the winters were mild and the rent was cheap, he explains—none of which prevented him from having to sell some much-loved camera equipment to get by.

Finlay, meanwhile, did graphic design with Hallmark Cards in Kansas City before moving to Austin to be closer to family. “I talked my way into the art director job [at Austin Monthly],” she says. “I had no idea what I was doing, but I was going to figure it out real fast.” A few weeks in, she met the man who’d messed up her layout. The editor, she recalls, had managed to smooth things over with Voorhes. They collabo­rated for a year on a monthly style page before Voorhes saw Finlay in a new light. “It was all of a sudden,” he says, glancing at Finlay seated next to him. “I called you.”
“I was in the car with my mom,” she says.

Sometimes it’s just the absurdity or willingness of where they will push something. Have you seen the beaver they shot for us at WIRED?”—Caleb Bennett

“I probably said something dumb,” he says.

“It was a friendship, and he totally ruined it,” she says.

A year later, they got married in a dog park. A year after that, they grabbed a late dinner at Romano’s Macaroni Grill. It was their one-year wedding anniversary. Finlay was on deadline, exhausted and, with a recent change of editors, frustrated with her job at the magazine. Voorhes had a second proposal: he suggested they work together full time. Finlay quit her job the next day.

That was nearly seven years ago. As their website bio says, “It has worked out.”

Indeed it has. These days, they shoot for the likes of WIRED, the Atlantic, Reader’s Digest, Money and O, The Oprah Magazine. As for romance, well… the name of Finlay’s first bulldog is tattooed to Voorhes’s bicep, for goodness’ sake.

On the eve of his second proposal, Voorhes’s photography career was already on the rise. His first big break was a beau­tiful glass of water. Strapped for cash, he’d used clip lights from a hardware store for a BMW ad, his first shoot for GSD&M—the ad made the back cover of WIRED.

When Finlay joined up, “there was a huge shift,” Rainwaters says. “Adam was already a really successful photographer by any account. Once they started working together, it was a completely different level. The amount of work, the quality of work, the production value—it was just off the charts.”

Once they started working together, it was a completely different level. The amount of work, the quality of work, the production value—it was just off the charts.”—Matt Rainwaters

With national clients, Finlay’s scrappiness emerged full force. To photograph a pig wearing a sweatband for a feature titled “Is Your Workout Making You Fat?”—their first assignment with Details magazine—Finlay posted ad after ad on Craigslist and met dozens of speckled pigs before finding one that was, per the editors’ request, perfectly pink. Whether gluing micro­chips to a miniature Trojan horse or transforming a yoga ball into a wrecking ball with a bit of texturizer and gray paint for a recent Atlantic cover photo, “she doesn’t say no to anything,” says Emily Kimbro, art director at Texas Monthly. “She’s more resourceful than anyone I’ve ever met.”

And both are fearless. For a while, Finlay and Voorhes kept a 50-gallon tank of liquid nitrogen on hand just to freeze stuff and blow it up. There’s no doubt that they egg each other on, especially when it comes to ideas. More often than not, the concept is up to Voorhes. When it comes to project execution, there’s a well-orchestrated division of labor between Finlay and Voorhes: she handles food and props, he handles light and photographs, both retouch in Photoshop. It’s a system that allows for several projects to be happening at once, one that has helped their work “elevate in ambition and execution,” writes Caleb Bennett, design director at Condé Nast Traveler. When it comes to ideas, however, their creative resources meld.

They’ll head to a restaurant with their dogs and their sketchpads, order margaritas, and riff. One person utters a half-formed thought, the other one says, “Oh, yeah, I get that!” Sometimes, Finlay says, she’ll worry something’s stupid or immature—like the idea that came to her, a few drinks in, to shoot a beaver clutching a dildo for a WIRED sex toys story—but the magazine will often go for it, even love it. “Sometimes it’s just the absurdity or willingness of where they will push something,” writes Bennett, who has worked with the Voorhes studio at various magazines since 2008. “Have you seen the beaver they shot for us at WIRED?”

“Often, I’ll want to execute three or four of their ideas,” says Ryan Cadiz, director of photography for Money maga­zine. “They always come back with an embarrassment of riches.”

Even the studio’s name is an innovation, a sign, perhaps, that the days of the lone photographer are numbered—if they ever really existed. Few have taken the pair’s full creative and romantic plunge, but Cadiz says, “I think there are more people willing to say, ‘I’m not the sole creator for this one thing.’ It used to be [that] the genius goes away and makes something and you don’t get to see behind the scenes. In this case, it’s great to have two geniuses go away and make something and both get the credit.” ca

Victoria Rossi is a freelance writer and paralegal. She worked as a researcher for Mother Jones magazine, then wrote for publications in Latin America and South Asia before returning to her home state of Texas. 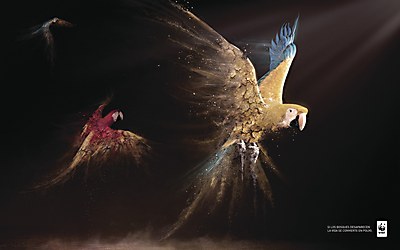 Features / Advertising
Contrapunto BBDO
In Spain, an ad agency rides the country’s cultural tides to speak to its audiences as equals. 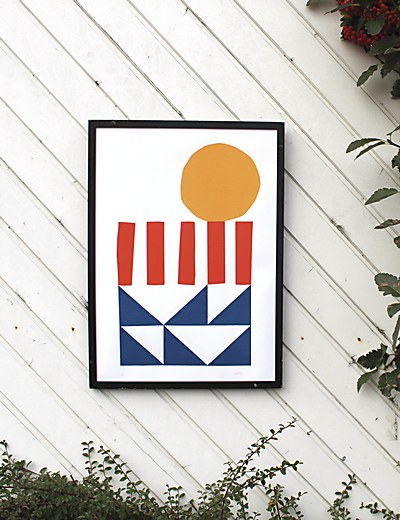 Features / Design
New Currents in Chicago Design
Steeped in modernism, young Chicago designers have embraced their city’s design history and innovated something of their own. 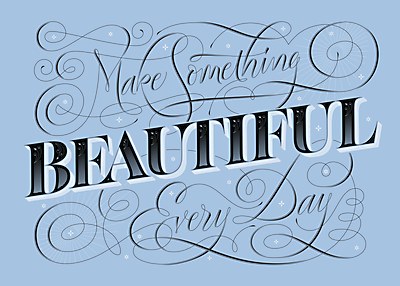