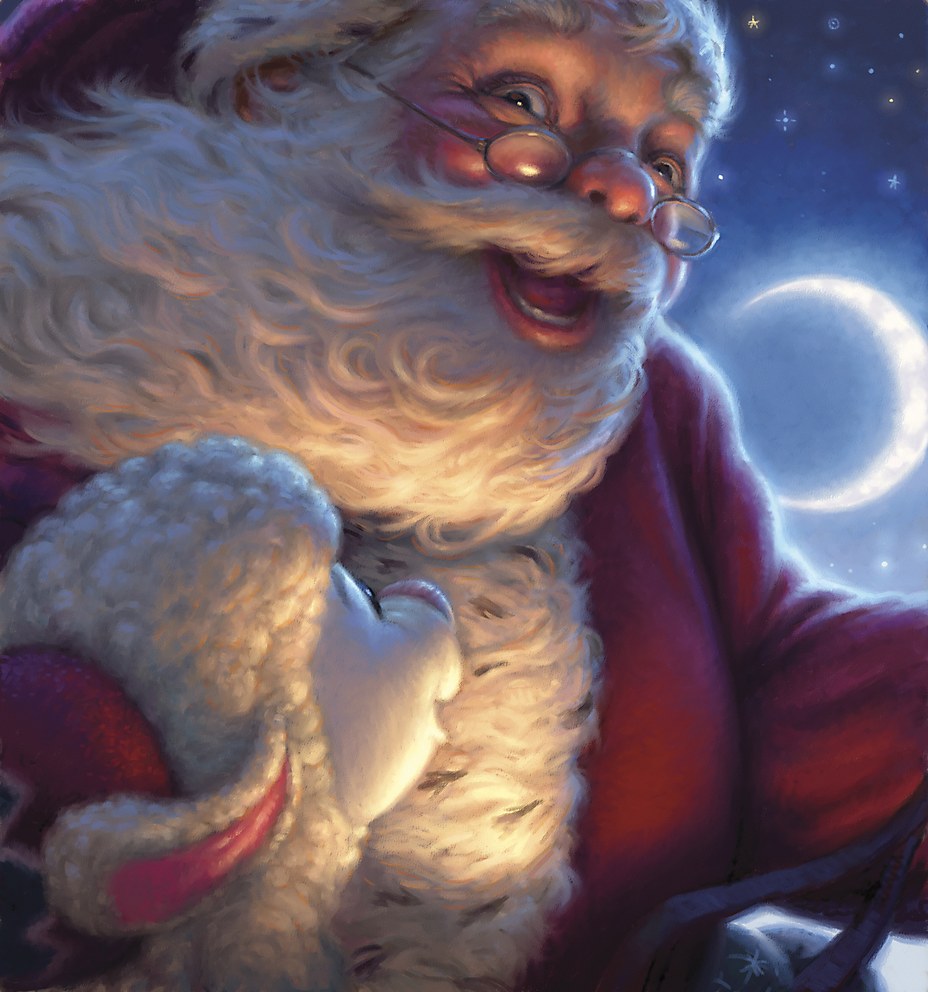 Illustrator Tim Jessell’s realistic “with a twist” style has been used in editorial, advertising, book and institutional categories—and has won awards in all of them. 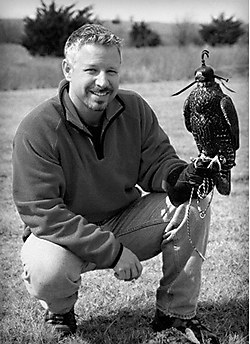 Not every illustrator has a walk-in cage in the backyard populated by two falcons, but for the past two decades the art of falconry has been as much a part of Tim Jessell’s life as the art he creates. The sport brought him to Stillwater, Oklahoma, where he frequently flew his tiercel imprint Gyr/Peale’s hybrid falcon, Spike. Considering it a good place to raise a family, he and his wife Ragan and their three children Abby, 16, Ben, 14, Molly, 11, two Shiba-Inus and a Shiba-Inu/Miniature Husky mix settled there, in a comfortable home a short distance outside town, down a gravel road, surrounded by green fields.

Inside a warm, paneled room off the living room of his home, he works at a computer station, meticulously painting—pixel by pixel—complex images of sports, animals and people, for a variety of clients including Miller Brewing, Dr. Pepper, Seattle’s Best Coffee, Nike, AT&T, Lands’ End, Hasbro Games, Time, Texas Monthly, Scholastic, Random House and Penguin Books, among others. His realistic “with a twist” style has been used in editorial, advertising, book and institutional categories and has won awards in all of them.

His illustrations are highly detailed and contain humorous elements—small insights into his often-anthropomorphic characters and their actions. He also creates really scary dragons. For Nike he painted Charles Barkley wrestling Godzilla, and his Oklahoma State University Spirit Rider astride a rearing stallion exemplifies the heroic nature with which he imbues his characters. 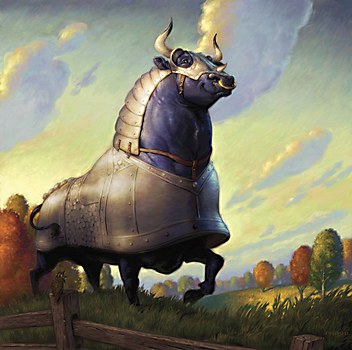 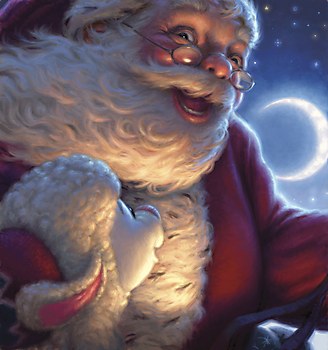 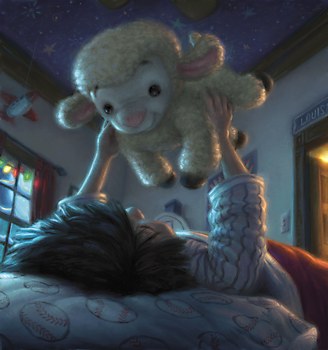 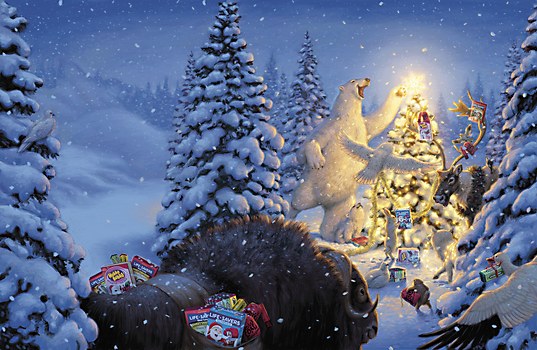 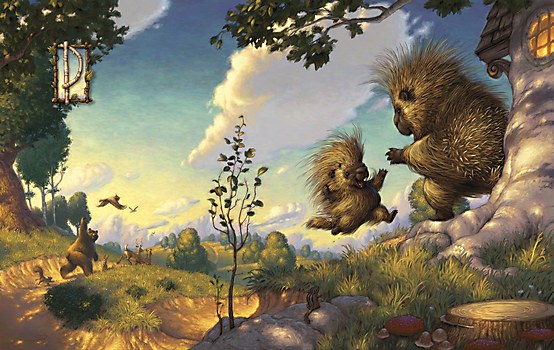 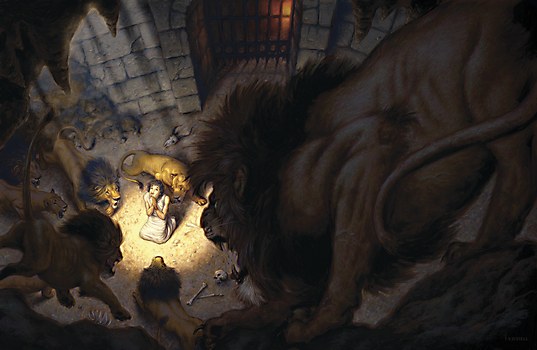 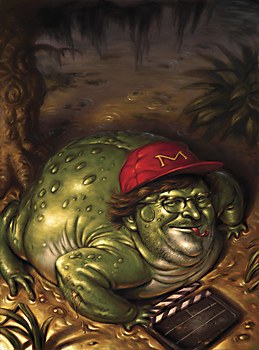 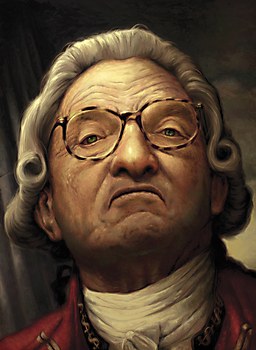 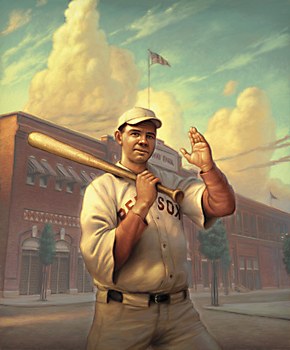 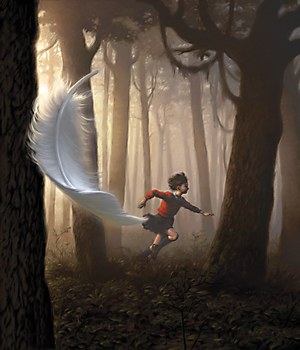 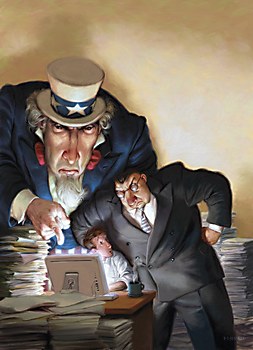 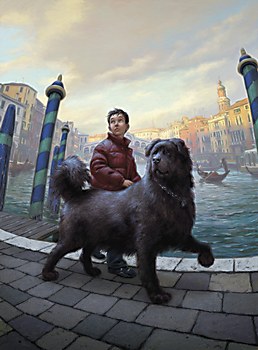 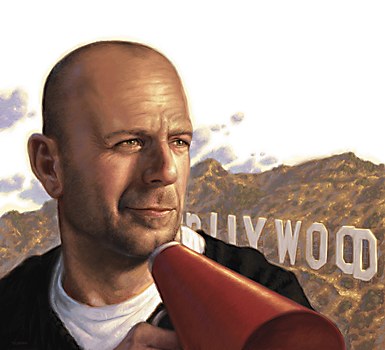 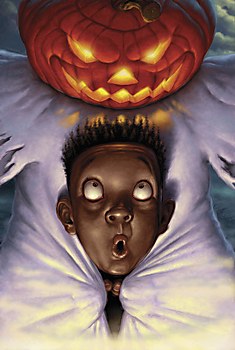 “Tim comprehends the broader context of the project. He understands that we are creating something together, and he comes along as a partner striving for excellence and the overall communication of the message. Every project we’ve done together has won design awards,” says Dwayne Cogdill, creative director at Saint Dwayne Associates in Charlotte, North Carolina.
It’s clear that Jessell has abiding affection for his animals, although he is also pragmatic about nature and its often-cruel devices. His art is infused with a sly sense of humor, an awareness of the pecking order of those on whom he has focused his attention. Given his background, it’s no surprise that he paints extraordinary birds although he appears able to paint just about any creature.

He grew up in Terre Haute, Indiana, a fragrant Rust Belt town redolent with the odors of industrial solvents, railroad ties soaked in creosote and a paper factory. “One of those places you have to live in to love it,” he says with a wry smile.

Jessell, 46, was drawn to art, and to the love of nature early on. “In first grade, I remember I had to ask permission from the teacher to get down on the floor. That’s when I could do my best. ‘Mrs. Lady, can I lay on the floor and draw?’

“The family legend [is] we’re in back of the white station wagon, or as we called it the ‘way-back,’ and we were going to Florida from Indiana. My mother had filled cigar boxes with activities, notepads, things like that, and she said, ‘Draw what you think you’re gonna see in Florida.’ The show Sea Hunt was on, so I drew a scuba diver stick figure and handed it up front. My mom was a math and art teacher, used both sides of her brain, and she said, ‘Well, you know people don't look like this.’ I think I was three at the time, I grabbed the paper back in a huff, and I drew an articulated diver with bubbles coming out of his mask, and fins, out of spite. As she tells it now, she looked at it, showed it to my dad, and he did one of those double takes.”
In first grade, I remember I had to ask permission from the teacher to get down on the floor. That’s when I could do my best. ‘Mrs. Lady, can I lay on the floor and draw?’" —Tim Jessell


Jessell would draw on the other side of his dad's school papers; he describes seeing the reversed type through his drawings. “Monkeys were on TV all the time, going up into space,” he remembers. So he would make up stories with monkeys as jockeys in a horse race and other improbable scenarios. He had an epiphany at four years of age, when he realized, “Hey, I can draw anything I want to!” He hasn’t stopped since. Only now he draws on the computer having transitioned from traditional media to Painter and Photoshop. “In my mind, I paint traditionally in a digital format so I’ve nicknamed it ‘tradigital.’ That’s how I was able to make the transition to illustrating in Painter as it really emulates natural media; Photoshop CS5 is a little bit more about knowing tricks, but the latest version of Photoshop has more blending that I'm used to so I was able to become proficient painting in Photoshop as well.”

His imagination, and his talent, knew no bounds. Maurice Sendak and N.C. Wyeth were his heroes. “I always knew I was going to be an illustrator,” Jessell says with quiet conviction. “My thing was drawing a book and stapling it. If I wasn’t out playing baseball, I was inside drawing. Laying on my stomach, drawing on a magazine...

“My dad looked sideways at art. He thought ‘how can you make a living at this?’” Jessell relates. His father was a PhD professor of counseling and education psychology at Indiana State and helped with the NCAA committees; when Tim was in high school, they went to Kansas City to visit John Boyd Martin, a painter friend who specialized in sports figures. Tim didn’t have a portfolio at the time. “I was bringing stuff off the wall in frames,” he recalls. He piled the car with his art and set off with his dad for his first professional critique. When his father saw how successful Martin was, with a studio downtown, he changed his mind about Tim’s career direction.

He considers his high school art teacher Mrs. Bretlinger the best art teacher he ever had. She put him on a track to enter the National Scholastic Art competition. “My whole senior year was dedicated to preparing my portfolio; at that time a little over 200 schools offered scholarships. I won my state, then I went to the national and the judges handed me the Tulsa scholarship, so it was ‘Oklahoma, here I come!’ I never left.” After graduation he contemplated leaving for the larger market of Dallas, but then Clay Turner started an illustration shop, the Turner Group, and he went to work assisting in Turner’s airbrush work, while building up his own portfolio when time allowed.
Every project we’ve done together has won design awards.” —Dwayne Cogdill


Jessell exemplifies the American work ethic, the now almost old-fashioned ethos of working hard, taking care of family and giving back to one's community. He’s gone from working in a cubicle in a downtown building with no windows, to a cozy space filled with vintage kids’ toys that would bring nice bids on eBay, including a G.I. Joe doll with a cool 1970s beard. Outside the French doors that his Shiba-Inu male, Kuma, can stand and open with a paw, lies flat open land and a pool that beckons in the blinding summer heat. And Bolt, the smaller Peale’s Peregrine Falcon screeches repeatedly for Tim, on whom he has imprinted. Jessell generally works late at night, since he coaches his children’s teams in baseball, softball, football and basketball and works with his falcons every day. Of his love for falconry, he explains, “It is specialized bird watching. In a sense I’m the bird dog; we just hunt together. I’m flushing, and he’s doing the deal.”

The first year Jessell entered the Society of Illustrators he won a Gold Medal. “We went to New York,” he recalls, “It was my second time in New York at that point. I was 23, and I met Brad Holland and C.F. Payne. I remember standing there in my suit and C.F. walks right toward me and says, ‘I want to see if you have a driver’s license!’” He has received many awards since, including being chosen Illustrator of the Year by Adweek magazine and he was honored at being named to his former high school’s inaugural “Hall of Distinction.”

Jessell is the cover artist for the popular The Secrets of Droon book series, among other children’s titles. Falcon, which he wrote and illustrated, tells a “day in the life” of a Peregrine Falcon, hatched in the mind of a child’s imagination, and will be published in March 2012 by Random House.

Tim Jessell still exhibits that joy of discovery he had as a child. His imagination still hatches heroes and dragons and ball players, stories of exploration and discovery, tales that soar above and inspire those left behind on the ground. ca 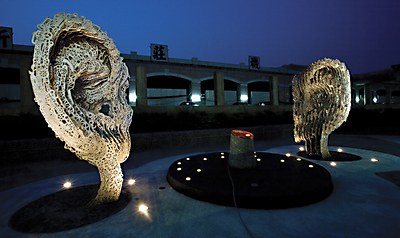 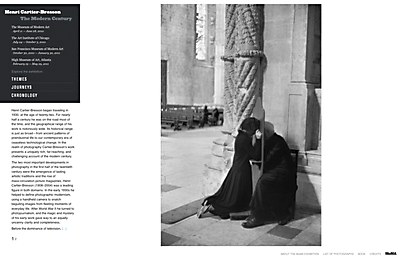 Features / Design
MoMA
MoMA's sites are the last thing from frenetic. They don’t drive visitors down paths; instead they open labyrinths that encourage them to get lost.