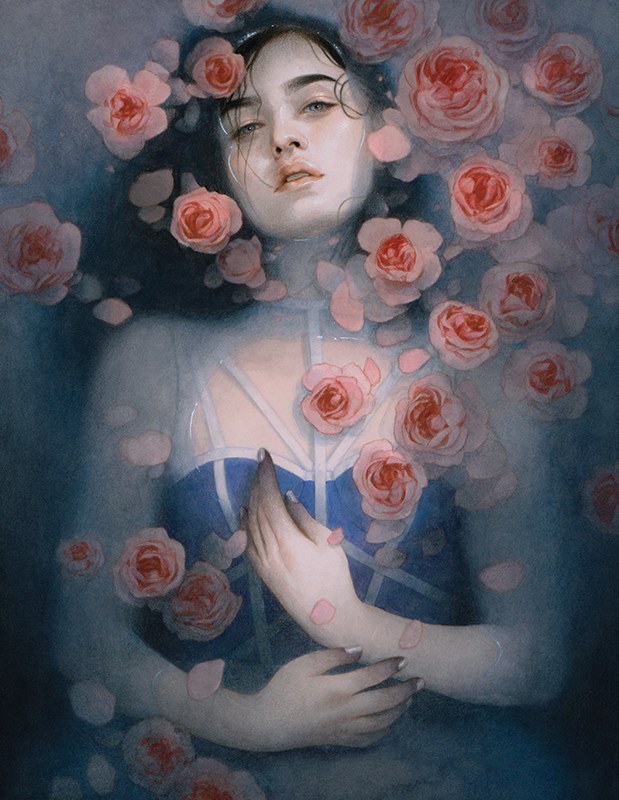 In the quiet of the night in Atlanta, an illustrator conjures up dreamscapes that feel otherworldly yet familiar.

They clasp ringed planets between their fingers. They dwarf homes and lighthouses. They walk along paths in the night, giant foxes or cats traipsing by their sides.

The women of Tran Nguyen’s paintings and illustrations are beautiful, and eerily so. They personify the singular aesthetic that the artist and illustrator has cultivated over the course of her career: detailed yet fluid; strikingly realistic yet otherworldly. But the fantastical landscapes that they inhabit are haunted by a lingering feeling—a whispered melancholy echoing from Nguyen’s own past.

Nguyen lives and works in Atlanta, half a world away from her birthplace in Can Tho, Vietnam. She doesn’t remember much from her first three years in her family’s dirt-floored, one-room house, though she does recall a brief flash of their journey to resettle in the United States: her first taste of cantaloupe, which a flight attendant offered to assuage her crying.

Her family landed in tiny Hephzibah, Georgia, where Nguyen’s father strung together an income working minimum-wage jobs as a cook while her mother stayed at home to care for Tran and her siblings. Growing up in a small house with two, and then three, brothers meant that solitude wasn’t easy to come by for Nguyen, the lone girl. Nguyen and her brothers played Final Fantasy on PlayStation and watched Hayao Miyazaki movies.

Nguyen was especially transfixed by the visuals of anime like Bubblegum Crisis and Neon Genesis Evangelion. When afforded the rare chance to watch them alone, she’d sit in front of the television set with the small painting kit her parents had given her when she was five years old and sketch scenes. By the time Nguyen entered her junior year in high school, studying art seemed like the most natural path—in many ways, the only one. “I didn’t really have a backup plan. I just knew that’s what I wanted to do,” she says. “My parents brought me over here to pursue what I wanted to pursue. Why give that up?” 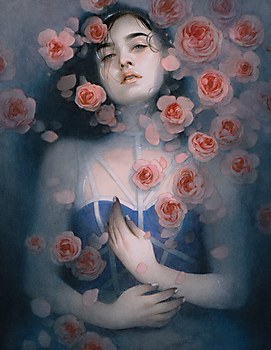 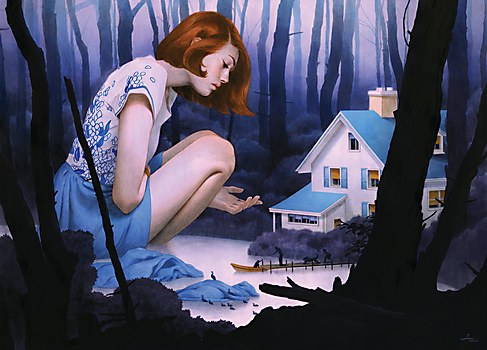 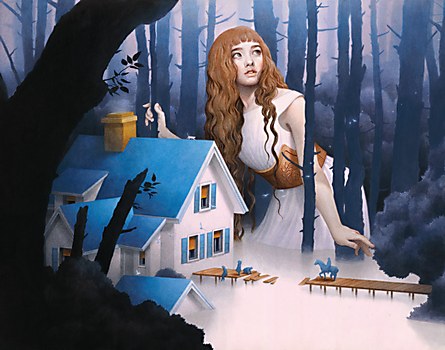 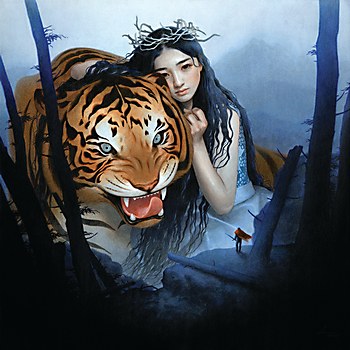 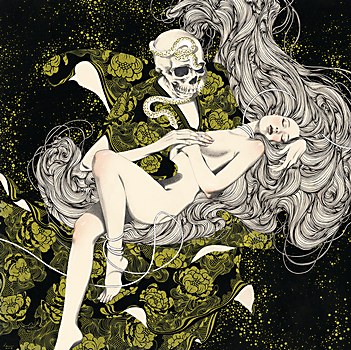 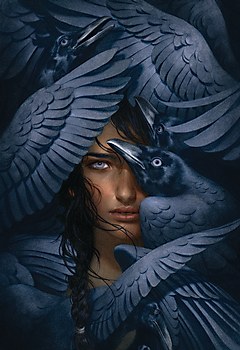 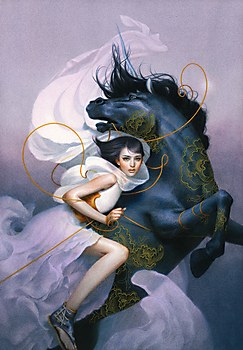 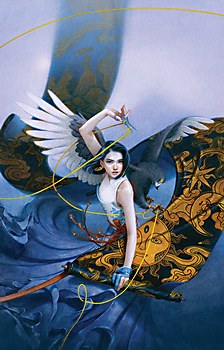 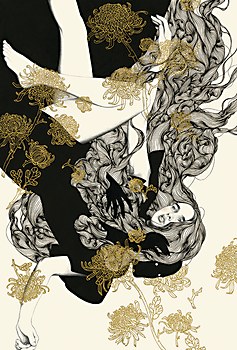 Nguyen enrolled in the Savannah College of Art and Design, where she decided to major in illustration. The opportunity to invest so much care in one image resonated with her. “I always liked very singular images that you spend a lot of time on to narrate a specific story, as opposed to animation or sequential art,” she says.

But just as Nguyen was beginning to immerse herself in her craft, tragedy struck: the loss of her younger brother, Dinh, who was killed in a car accident at the age of fourteen, when Tran was a college freshman. A loss like that, Nguyen says, “makes you grow up faster.”

It also shaped her art. Nguyen’s work is often described as “melancholy,” a word she herself uses when talking about her style. Nguyen attributes the somber tones in her pieces to her own firsthand experiences with tragedy, as well as mental illness, with which she says a family member has long grappled. She credits the work of art therapist Bruce L. Moon, whose collection of case studies sits on Nguyen’s bookshelf, for inspiring her to braid difficult emotions into her art. “He put into words what I wanted to say in my work,” she says.

Nguyen suspects it’s these elements that resonate with people. “I want to convey images that capture those obscure emotions that people, who have maybe dealt with something similar, can connect with,” she says. “It’s a work in progress for me as well.”

I always liked very singular images that you spend a lot of time on to narrate a specific story, as opposed to animation or sequential art.”

After graduating in 2009 and subsequently entering one of the worst job markets in modern history, Nguyen returned to her family’s home in Hephzibah and worked as a graphic designer by day, hustling for freelance illustration clients after hours. After a move to Atlanta and a few contract jobs, including a stint working as a background artist on the animated series Archer, Nguyen made the leap to self-employment in 2013. She’s been working full-time as a freelance illustrator ever since.

Now, Nguyen juggles commercial work for clients like World Wildlife Fund, Random House and Netflix, in addition to gallery work for group shows. Nguyen also worked with a publisher to release her retrospective art book, Ambedo, on Kickstarter last spring, and is planning a solo exhibition at Thinkspace Gallery in Los Angeles in 2021.

One of Nguyen’s longtime clients is Common Cider, a line of craft hard ciders brewed in California. Founder Fran Toves encountered Nguyen’s work four years ago when Toves was developing Common’s brand from scratch. “I think her illustrations really tell a story,” says Toves, “and that’s what we wanted.” Toves also recognized Nguyen’s technical mastery. But there was one hesitation: “I said, ‘Can she do happy? Can she connect with joy?’”

Those hesitations subsided when she saw Nguyen’s sketches for Common’s flagship flavor, Blood Orange Tangerine. In the image, a woman in grayscale, surrounded by vibrant citrus fruits, blows bubbles, her wavy hair wafting in the breeze. “We’ve been keeping Tran on the joyride ever since,” says Toves.

Alison Impey, a senior art director at Random House Children’s Books, came across Nguyen’s work on Instagram. Impey was working on Spin the Dawn, a young-adult fantasy by Elizabeth Lim, and was struck by how the woman in one of Nguyen’s paintings, Sleepless on the Silk Road, embodied the heroine of the novel. “I saw it and was like, ‘This is the character of our book,’” says Impey. “She was capturing something so beautiful and feminine and delicate, but at the same time, incredibly strong and powerful.”

Impey hired Nguyen for the cover art, and has since worked with her on other fantasy titles, including the book’s sequel, Unravel the Dusk. “I’m always impressed with people who seem to have the sheer talent and vision and creativity, but also can deliver on the commercial level and collaborate with people on the corporate side,” says Impey. “She certainly does.”

All of this work happens in Nguyen’s tidy studio, which is set up in the nook jutting off her living room. Nguyen, who describes herself as a night owl, rises around 3:00 pm each day. Around 10:00 pm, after errands and emails, she sits down at her drafting table and cues up an audiobook. “The better the book, the more glued I am to the chair,” she says. She works until bedtime at dawn.

For them, it’s magic. That raw response is really nice to get.”

Perhaps the most crucial part of Nguyen’s workflow isn’t the work at all. Late at night, the artist will sit with a cup of coffee to reflect on ideas she wants to explore, sometimes for two or three hours at a time. It’s in these moments that Nguyen has epiphanies that yield the often-poetic titles and ethereal quality of her pieces. While they are realistic at first glance, Nguyen likes to weave surreal elements into the composition in unexpected, often subtle ways. The result, she says, is “something that looks like it could exist, but if you look closely, you find little treasures that tell you this is more of a dreamscape.”

To clarify what she means, Nguyen gestures to a large work in progress propped against her bookshelves—a scene of two women gliding across a body of water on a canoe. One of the women carries a birdcage, though a close look reveals that it holds not starlings or sparrows, but planets and stars. Her companion clasps a ringed planet, no larger than a chickpea, between her thumb and forefinger. These are “star collectors,” who are traversing the universe in search of lost stars, and the idea of painting them came to Nguyen in one of her moments of quiet during the night, she says. A closer look at the painting reveals that her brushstrokes have achieved the soft, gradient effect of the softest charcoal or pastels, while delivering the most exacting details, down to a single eyelash or freckle. That is the balance both in her work, and in how she achieves it—the meticulous level of detail that brings her subjects to life, and the sweeping, fluid motions that haunt them.

With such controlled precision, it’s hard to believe that Nguyen’s work has also appeared in larger-than-life format. In 2017, Nguyen traveled to Hua Quan Village in China to complete her first mural, A Star-Studded Demeanor. She laughs when she remembers her initial reaction to the commission: “I’ve never done a mural. Why do they think I know how to do murals?” But Nguyen ultimately agreed to the assignment—“I find it really hard to say no to free travel”—and jetted overseas in the height of China’s monsoon season. She painted the 20-by-13-foot work in torrential rain and lightning.

Murals, says Nguyen, are “night and day” from her usual work; they present a host of unpredictable factors, from the temperature of the air to the texture of the wall. Scale is an interesting challenge too. “I’m used to working like a mouse,” she says. “But with murals, I have to see more of the big picture and not get lost or get too meticulous with details.” And, as someone who mostly works in solitude, she appreciates the public nature of mural work, and the strangers who stop to watch. “For them, it’s magic,” says Nguyen. “That raw response is really nice to get.”

Nguyen’s murals have also appeared in Kaka’ako, Hawai‘i, and Lancaster, California. If she could choose anywhere on the globe to paint, though? “Probably Vietnam,” says Nguyen. “Even though I’ve been here for so long, and I’ve definitely become more Westernized, all of my [extended] family is [still] over there. It would just feel really nice going back home.” ca 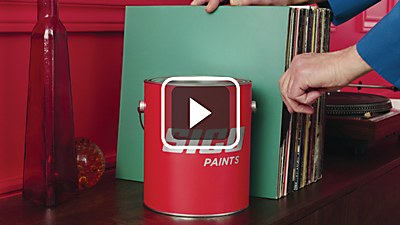 Features / Advertising
Bleublancrouge
By teaming up with its fellow Québec powerhouses, this ad agency has proven that its creativity and innovation extend to its business model. 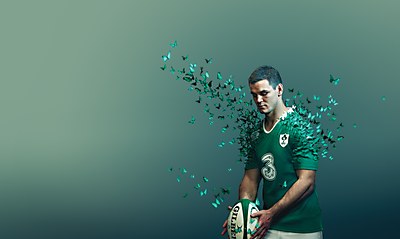 Features / Photography
Alex Telfer
Ad creatives in need of gritty, dramatic imagery call on the photographer who built a creative sanctuary in an old church in North East England. 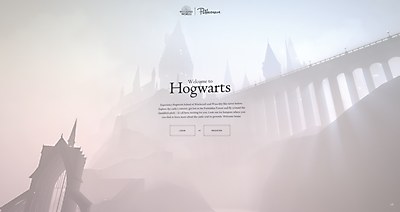