“The best entries had a strong idea tied to an innovative execution,” juror Joanne Kim says. “You can tell these teams thought through the entire execution as it was coming together, rather than waiting until the idea was ‘perfect’ to throw to the producers.”

“Humor and satirical entries were way down, and heady causes were way up,” juror John Maxham says. “In the wake of social conscience–raising successes like Always and Dove, a new template has emerged—tug-at-the-heartstrings case study videos.”

“There were a disproportionate amount of entries from the health-care sector,” says juror Carolyn Hadlock, “[but] very little work made it into the book. However, this sector will continue to grow, creating an opportunity to do the first disruptive work in the category.”

“I was most impressed with the integrated and non-traditional entries,” juror Pat McKay says. “Every year, I see non-traditional stuff that makes me angry because I didn’t think of it—good angry.”

“A lot of the work we saw was in the ‘What is it?’ camp,” Kim says. “It was sometimes difficult to put a label on it; many entries made you stop and question: ‘Is that advertising?’”

“Grey San Francisco’s ‘In Search of the Most Dangerous Town on the Internet’ for Norton by Symantec is probably one of the greatest examples of work that illustrates the changing use of media and demographics,” juror Jaime Rosado says. “This documentary is not only amazingly filmed, but also a very good example of great content designed for a very specific audience. Nowadays, brands need to be publishers and content creators.”

Craft in advertising has been a topic of discussion by recent juries, and this year was no exception.

“I’ve been seeing a return to craft in print lately, and the entries this year reflected that,” McKay says. “Nicely written headlines, art directors and designers pouring over badass visuals—I like seeing respect for old-school craftsmanship continuing to come back.”

“As much as I love a good Snapchat filter, I’m still in awe of the perfectionism required to make great print,” juror Shanteka Sigers says. “There is no beta. There is no soft launch. There is only an insertion date.”

But Maxham says, “With some notable exceptions, craft continues to erode as speed eclipses all other values that clients and culture currently care about.”

“I know everyone loves to harp about the lack of craft in this day and age, but if it’s not print or traditional TV, we need to relax,” Kim says. “Content doesn’t last three months or three years anymore. Sometimes it doesn’t even last three days. You have to know when to push teams to bleed and when you don’t have to make them kern type for five days.”

I asked the jurors what their biggest disappointments with the entries were.

“Many brands that had tenuous claims to social good nevertheless tried to jump on the making-the-world-a-better-place bandwagon,” Maxham says. “This seemed particularly cynical and exploitative. I fear it’s going to lead to ‘good cause fatigue’—depriving genuinely worthy causes of the attention they deserve.”

“Clearly, the climate is more conservative with clients and budgets, but it does worry me that advertising isn’t driving culture these days. It’s riding it,” says Hadlock.

“A number of ideas strong in concept fell down when it came to expressing them in case-study format,” says juror Patrick Scissons. “Trying to ‘sell’ how good your idea is to a dozen cynical, sleep-deprived creative directors is a no-win proposition.”

I also asked how advertising is adapting to the changes in media and demographic fragmentation.

“Heavy emphasis on social, ambient and digital ideas is the simple answer, but ideas like long-form content and GEICO’s Unskippable campaign show that we have to entertain or outsmart media expectations,” says juror Keith Cartwright.

“The fact that consumers are overinformed and extremely saturated with content—and are sometimes very good content creators themselves—makes our job more difficult every day,” Rosado says. “We need to keep surprising them.”

“You have to know your audience to be successful,” says McKay. “But, perhaps a little too often, we end up mimicking their micro sized communication behaviors instead of creating the kind of content that intrigues them enough to come to us.”

“Having elasticity in tone and execution helps take brands to a more human level,” says Hadlock. “A psychographic appeal is displacing the more literal demographic approach of the past.”

Lastly, I asked which business, cultural and social developments may dramatically alter the future of advertising.

“Data analytics and the role it plays in client decision-making going forward,” answers Scissons. “The struggle between going with your marketing gut and combing through big data insights will keep a few marketers up at night.”

“We all need to be prepared to adjust to the crowded content environment created by social media and digital news aggregators,” Cartwright says. “Advertising will have to work closer with entertainment to get attention in a very crowded space.”

“In a culture where everything from gender to age is fluid, it’s more important than ever to create communication with heart,” says Hadlock. “The challenge will be that social causes will compete with a brand’s products and services. It’s pretty easy to see what will win in that scenario. To compete for attention, brands will need to add a causal element at a level more fundamental than where they currently are.”

“Behavioral science will change advertising,” Sigers says. “We use behavioral science to create solutions for brands. That means our deliverables just got far more interesting and far more effective and are sometimes unrecognizable as ads. While such subtlety is highly unusual for the industry, I think that’s part of where things are going.”

Selection for this year’s Advertising Annual required a minimum of five out of eight votes. Judges were not permitted to vote on projects in which they were directly involved. When judges’ pieces were in the ﬁnals, editor Jean Coyne or I voted in their stead. I would like to extend our grateful appreciation to our jurors for their conscientious efforts in selecting our 57th Advertising Annual. —Patrick Coyne ca 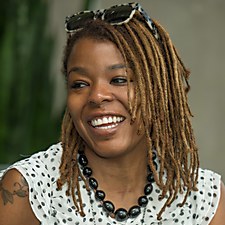 Shanteka Sigers
senior vice president, executive creative director
Sanders\Wingo
Shanteka Sigers is senior vice president, executive creative director at Sanders\Wingo in Austin and El Paso, Texas. Business Insider lists her as one of the Most Creative Women in Advertising. Black Enterprise has twice named her one of the Top Women in Advertising & Marketing. She has created campaigns for McDonald’s, AT&T, Verizon, Chevrolet, Toyota, Proctor & Gamble, General Mills, Allstate, Nationwide Insurance, truth and more. Sigers has waxed poetic at the 3% Conference, the One Show and South by Southwest Interactive and is both a winner and a judge of advertising industry awards. 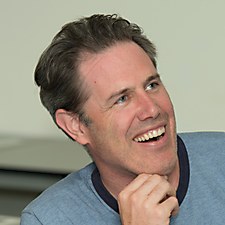 Patrick Scissons
global chief creative officer
KBS
Patrick Scissons is global chief creative officer of New York–based KBS. Prior to joining KBS in 2016, Scissons was chief creative officer of Grey Canada. During Scissons’s five-year tenure, Grey was honored twice as the Advertising & Design Club of Canada’s Agency of the Year and also received thirteen Cannes Lions. His work for Moms Demand Action for Gun Sense in America has helped persuade several companies in the United States to stop allowing loaded guns in their retail stores. He grew up in Saskatchewan, where the –40°C winters were instrumental in developing the thick skin needed for advertising. 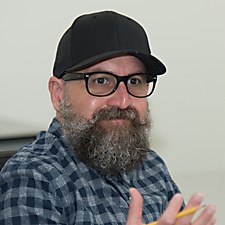 Jaime Rosado
creative vice president/regional creative director
J. Walter Thompson Puerto Rico and Latam
Jaime Rosado is creative vice president of J. Walter Thompson Puerto Rico and regional creative director of J. Walter Thompson Latam, a position he has held since 2002. In 2010, Rosado was chosen as one of the decade’s Top 20 Creatives in Latin America and the Iberian Peninsula by Adlatina. He won the first Gold Lion for Puerto Rico at Cannes in 2002 and the first Grand Prix for Puerto Rico and the Caribbean in 2012. His work has also been recognized by the CLIOs, Communication Arts, D&AD, El Ojo de Iberoamérica, El Sol de Iberoamérica, the Festival Iberoamericano de Publicidad, the New York Festivals, the One Show and the Radio Mercury Awards. 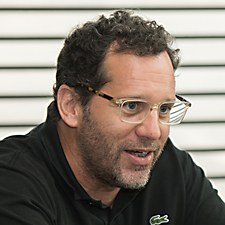 Pat McKay
executive creative director
Cole & Weber United
Pat McKay is executive creative director of Cole & Weber United in Seattle, Washington. Previously, he worked as a writer and creative director at Wieden+Kennedy London; Goodby, Silverstein & Partners; DDB LA; and The Martin Agency. He moved back to his home state of Washington in 2010 and freelanced before landing his current role at Cole & Weber in 2014. His work has been recognized by the Association of Independent Commercial Producers, the ANDY Awards, the Art Directors Club, the Belding Awards, Cannes, the CLIOs, Communication Arts, D&AD, the Effies, the Emmys, the Kelly Awards, the London International Awards, the One Show and the Webby Awards. 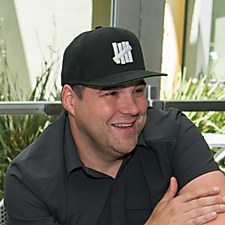 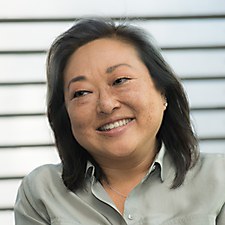 Joanne Kim
partner/chief idea officer
Marcus Thomas
Joanne Kim is partner/chief idea officer at Marcus Thomas in Cleveland, Ohio, where she oversees the agency’s creative, production and digital production centers of practice. After studying design for two years, Kim realized she was better at copywriting and graduated with a BS in advertising from Kent State University. Kim was inducted into the American Advertising Federation of Cleveland’s Advertising Hall of Fame in 2015. She holds numerous awards, including the American Association of Advertising Agencies’ O’Toole Award, Communication Arts, the One Show, Print, the Telly Awards, the Webby Awards and the national ADDY Awards. 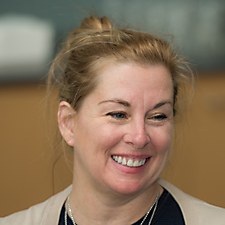 Carolyn Hadlock
principal and creative director
Young & Laramore
Carolyn Hadlock is a principal and creative director of Young & Laramore (Y&L) in Indianapolis, Indiana. Deciding early on between nursing and advertising, she chose the X-Acto blade over the hypodermic syringe and graduated with a BFA in visual communications from Indiana University Herron School of Art and Design. Since she joined Y&L in 1991 as an art director, her work has garnered recognition and many awards, including from the Art Directors Club, Advertising Age, Adweek, Cannes, Communication Arts, the Effies, Graphis and the One Show, and has been featured on NBC’s TODAY show and in the Wall Street Journal, the Los Angeles Times and USA Today. 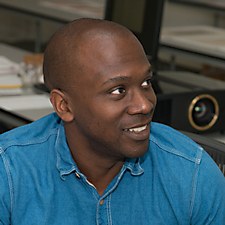 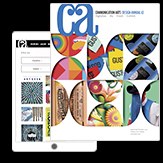