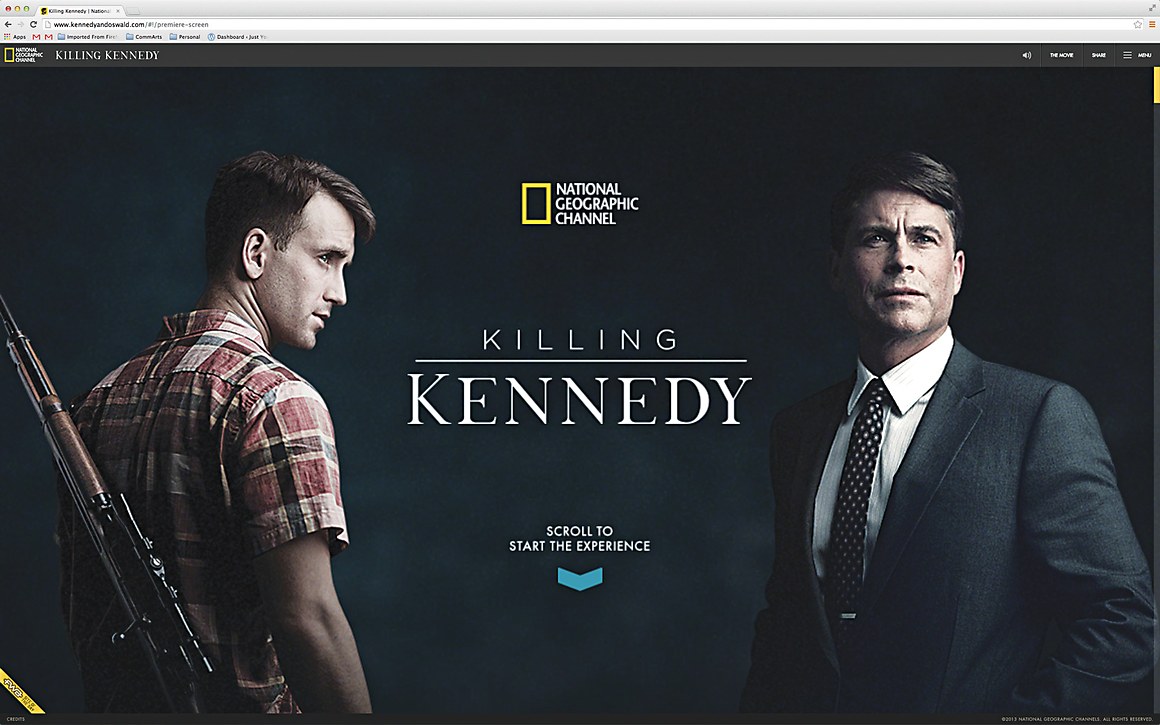 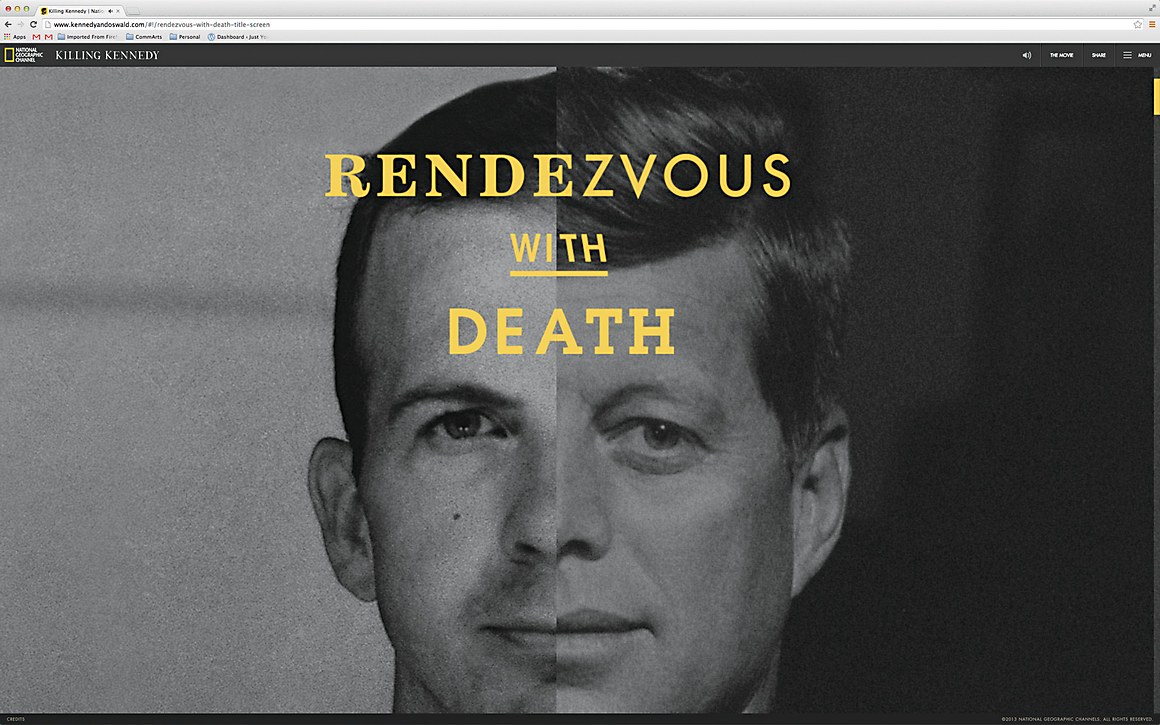 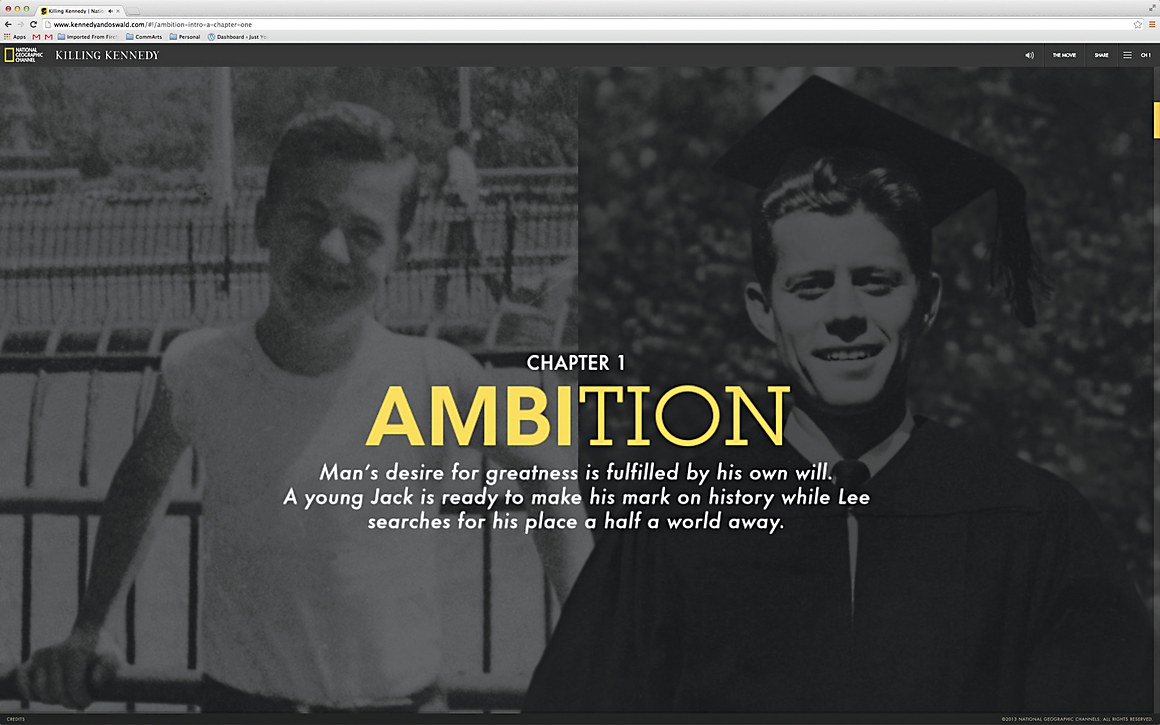 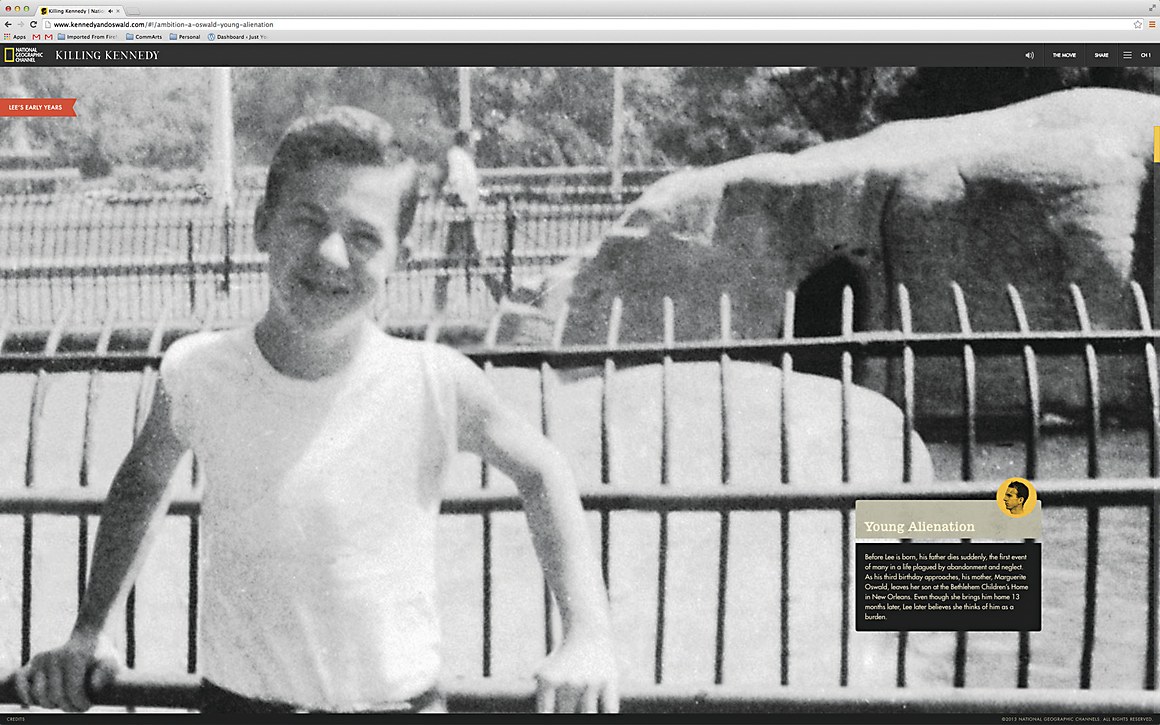 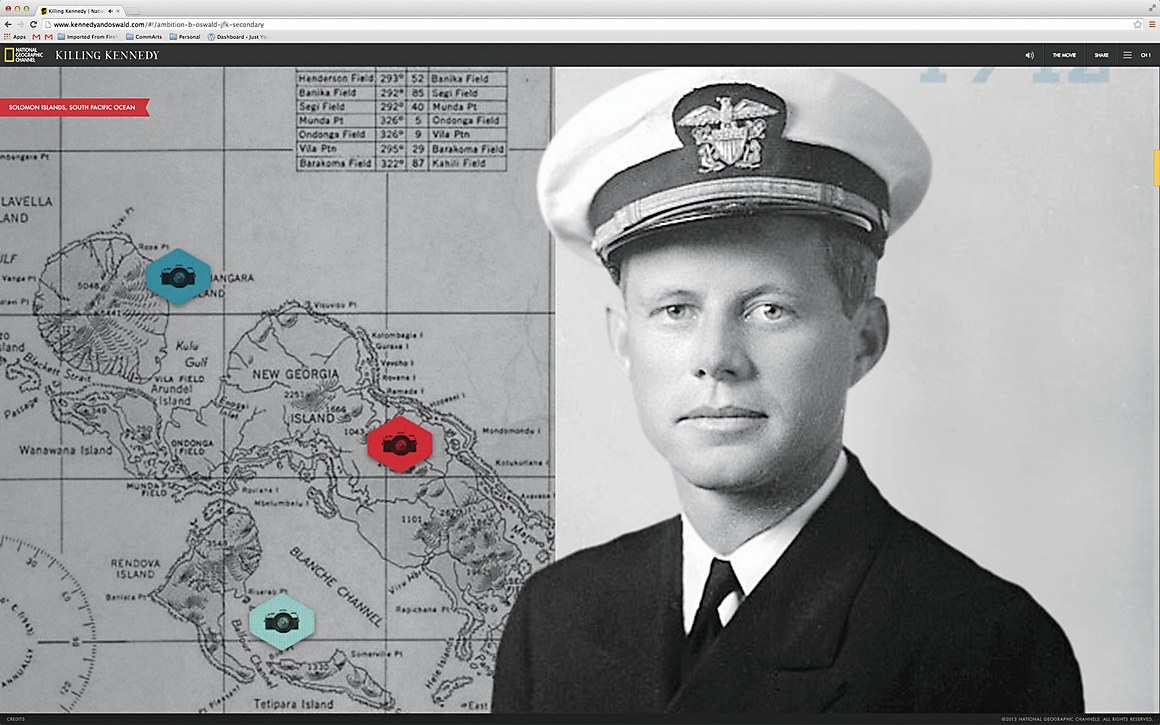 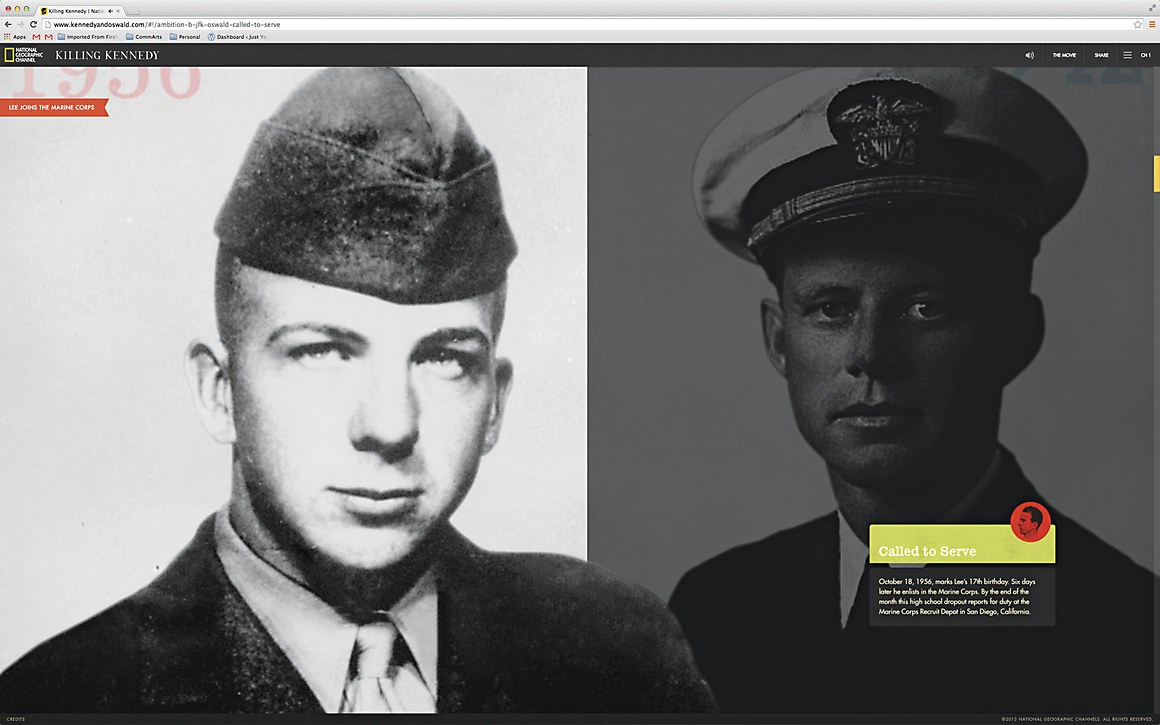 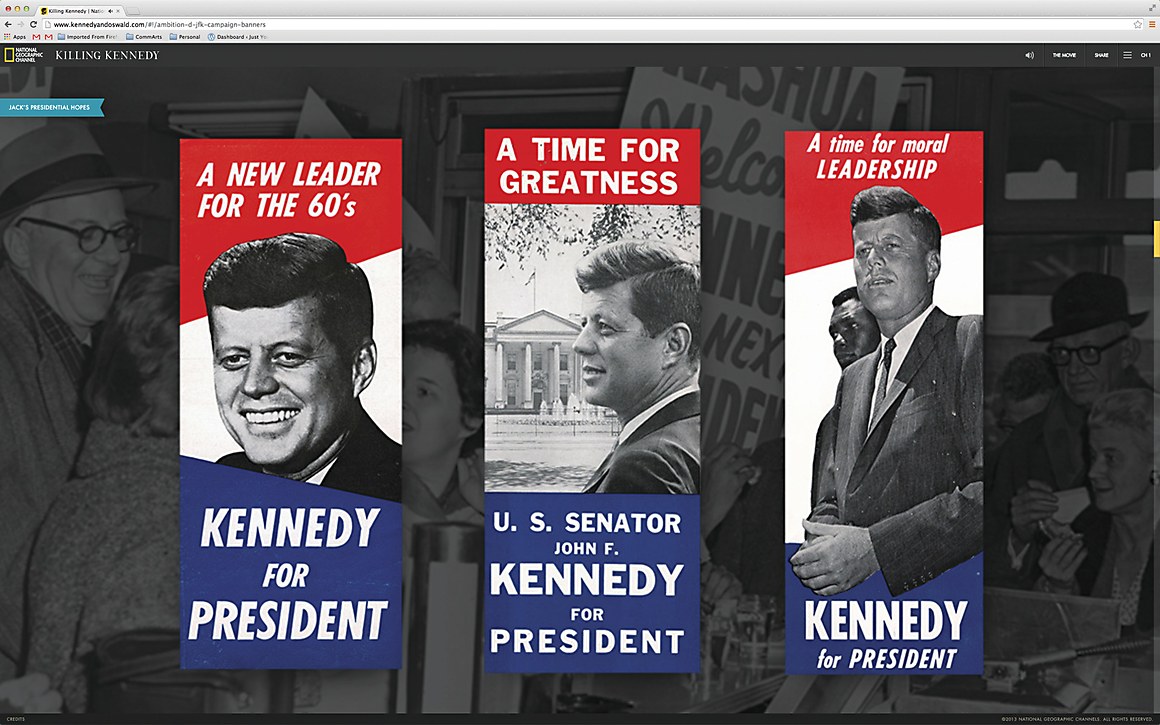 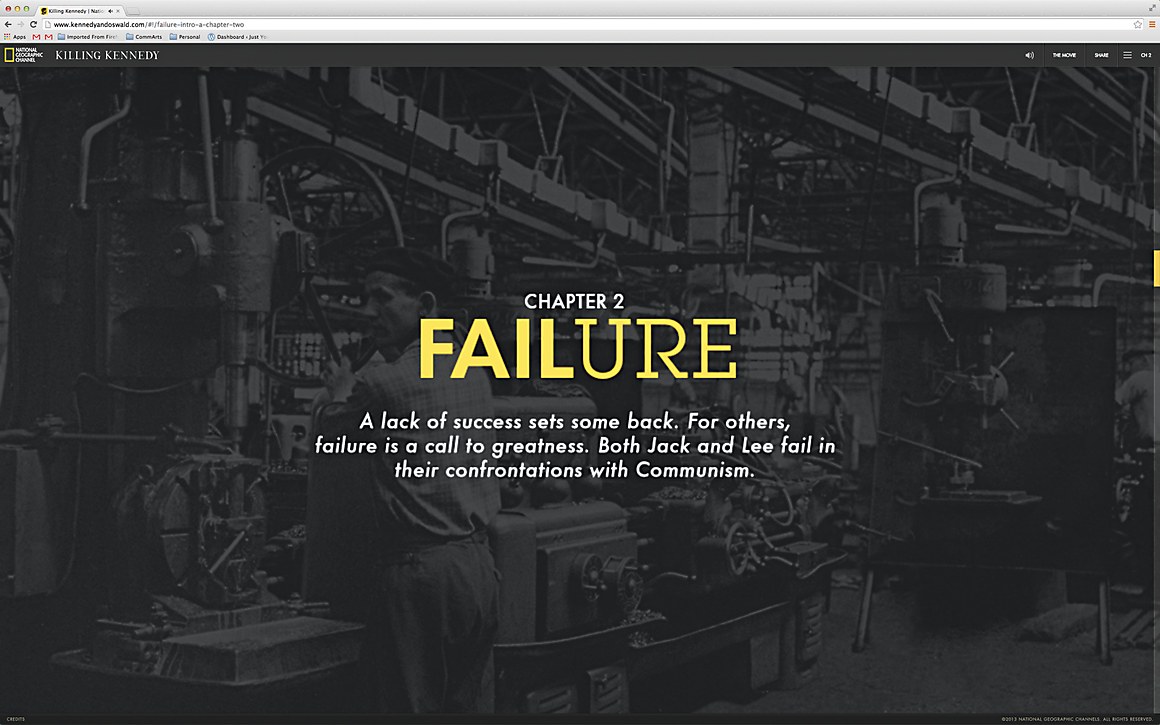 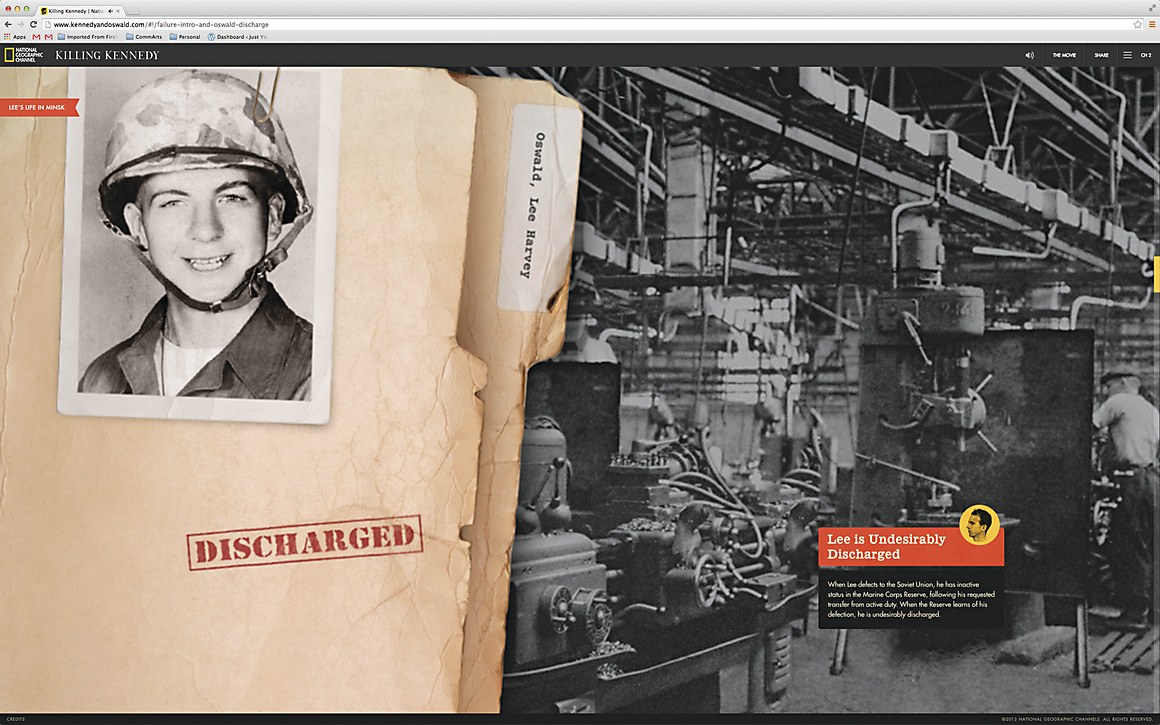 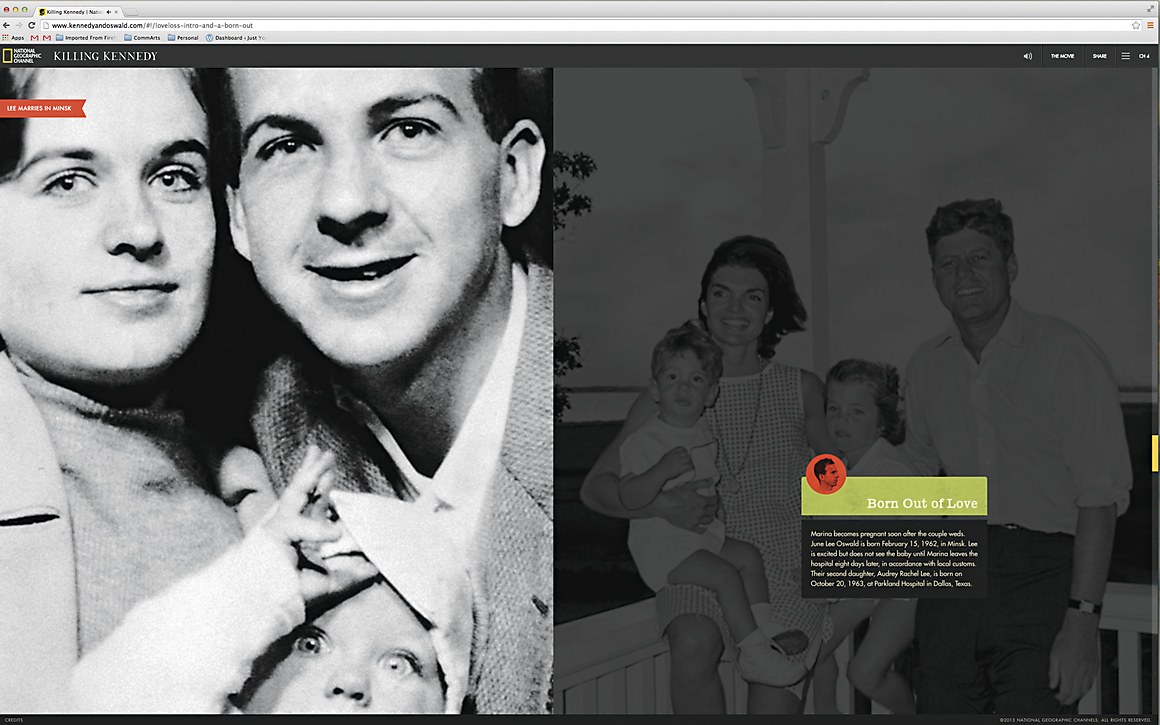 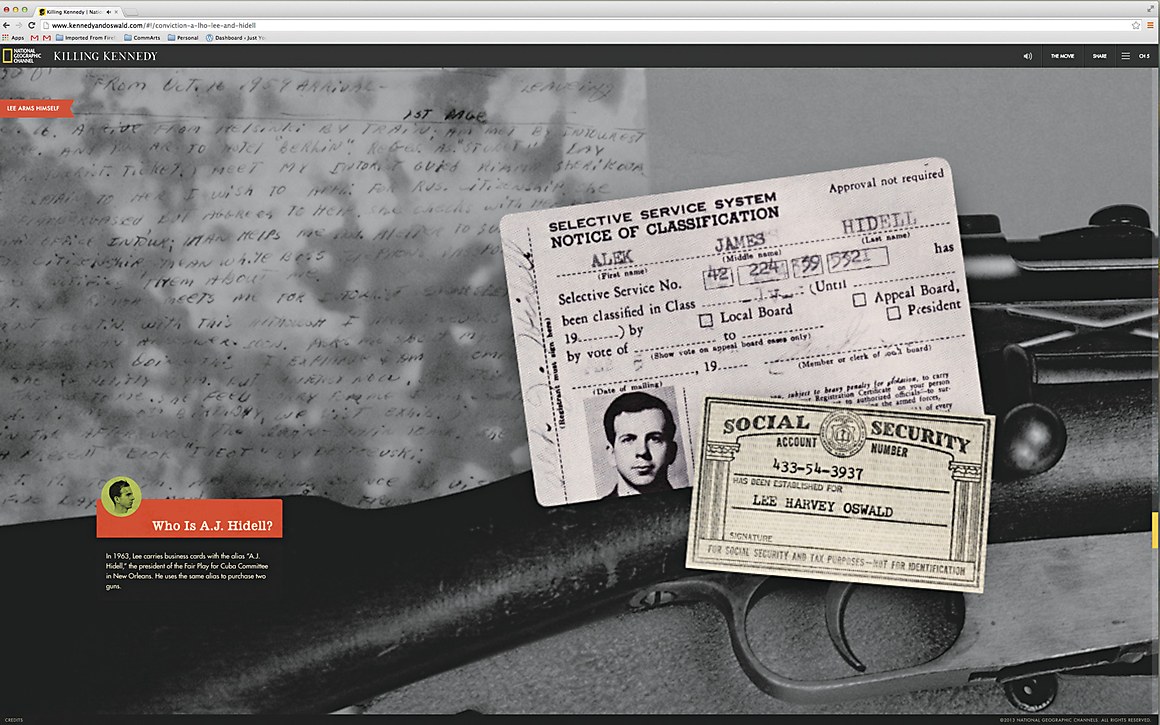 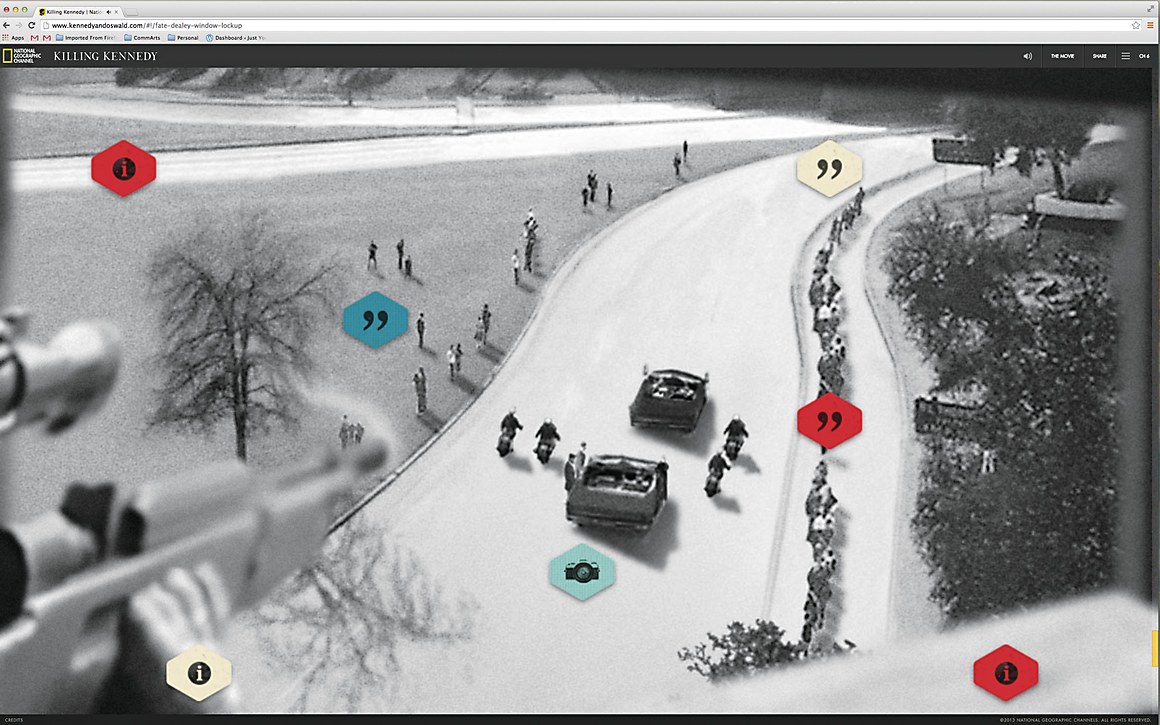 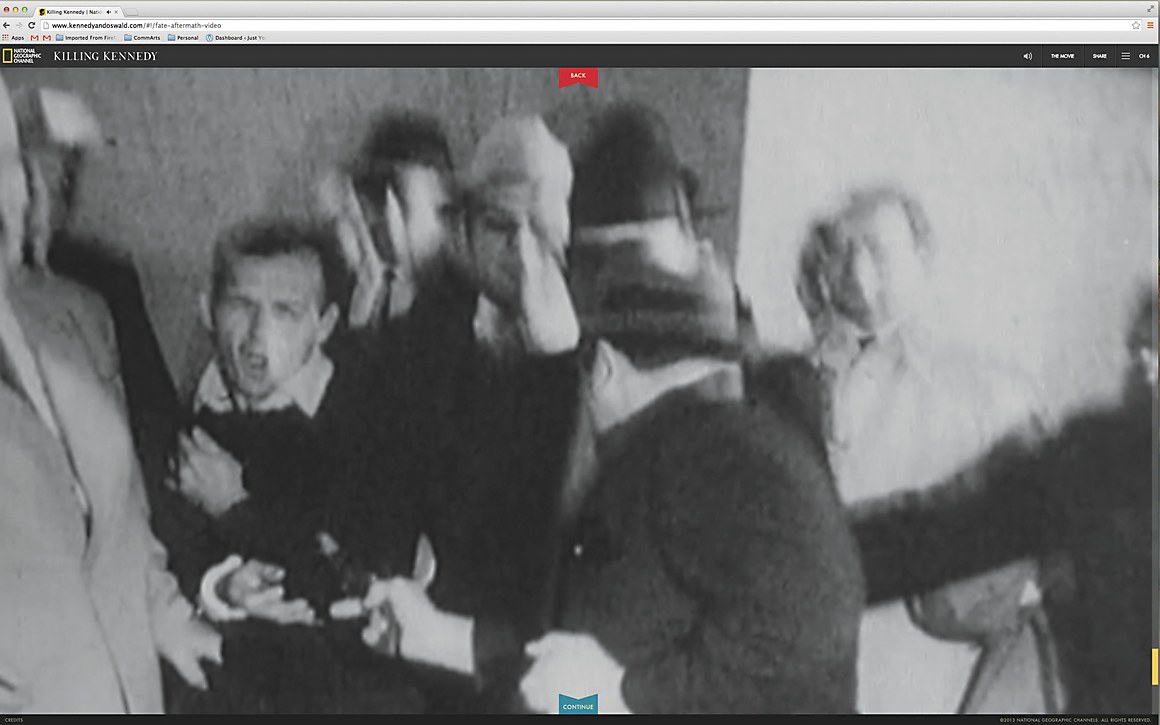 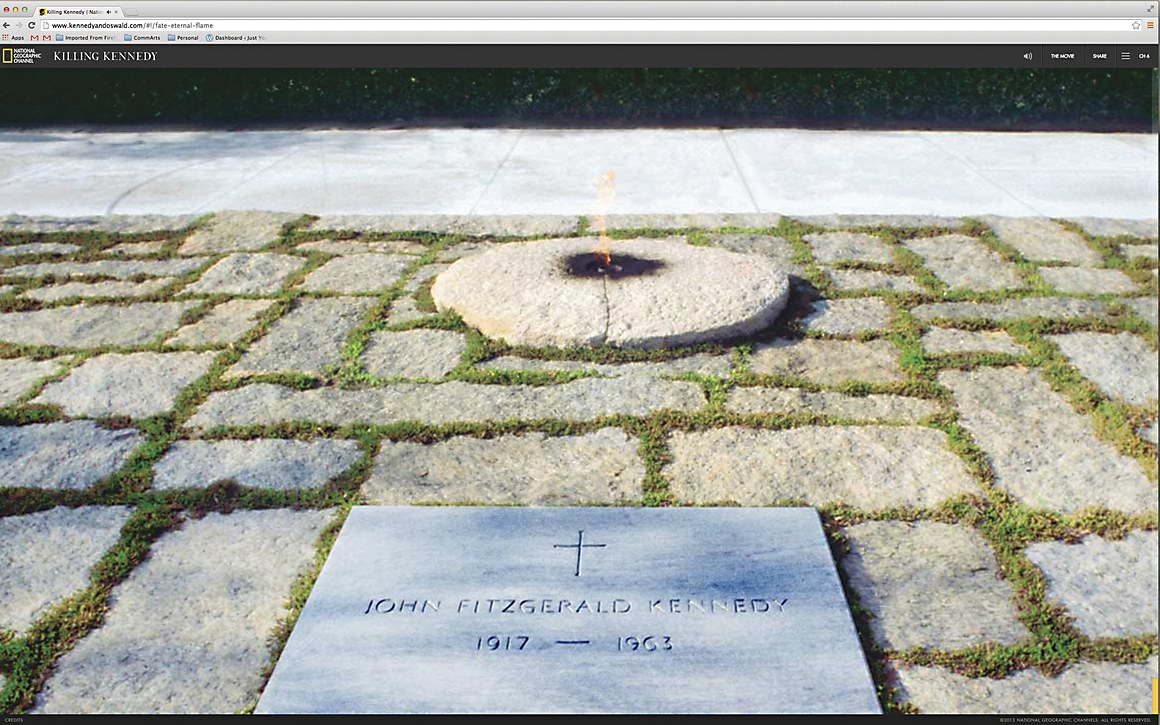 “An original interactive storytelling experience with a high degree of design craft. A great reminder that sound design can make or break an interactive concept.” —juror Winston Binch

“An exquisite narrative that explores the lives of two men who appear to be forever connected.” —juror Ginny Golden

Overview: What drives one man to become president and another to become his assassin? Amid the media chaos surrounding the 50th anniversary of the assassination of John F. Kennedy, Mullen and Mediahub worked with National Geographic Channel to take a closer look at the well-known story of Lee Harvey Oswald’s assassination of the president. Kennedyandoswald.com traces the paths of two men that ultimately led to a historic, and tragic, convergence.

Comments by Christian Madden:
What are the project’s core features? “Our goal was to make the line dividing creativity and technology indistinguishable. We put the user experience first, building an interactive HTML5 site for desktop, tablet and mobile that uses parallax scrolling to tell the story, actually two stories—Kennedy’s and Oswald’s—with photos, videos and audio clips. The site can stand alone, but was also able to be synced with the live airing of Ridley Scott’s Killing Kennedy TV movie.”

Are there any special navigation features? “We wanted the site experience to mirror how Kennedy’s and Oswald’s lives were moving in opposite directions, yet were destined to meet one day in Dealey Plaza. The primary means of navigating the site is scrolling, and as users scroll, the parallel stories of these two men play out alongside one another. This dual-scrolling technique served as both our navigation and our narrative structure.”

What was the most challenging aspect of the project? “The assassination of JFK is one of the most well-known, deeply examined stories in American history and is revisited every November, particularly in 2013, the 50th anniversary of Kennedy’s death. The challenge of retelling this story in a new and innovative way was significant, and the team spent a great deal of time conceptualizing and prototyping new interactive narrative approaches before we finally settled on our dual-scrolling parallax construct.”
See the gallery
Related
Buster + Punch 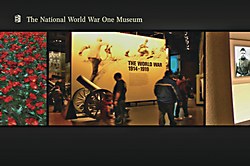 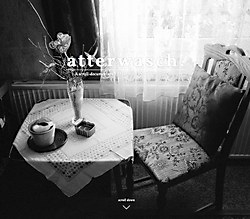 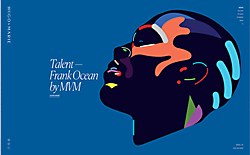 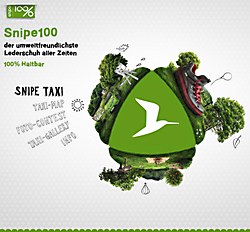 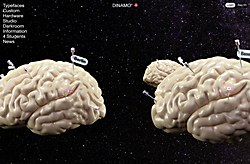 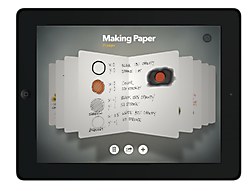 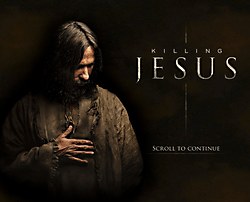 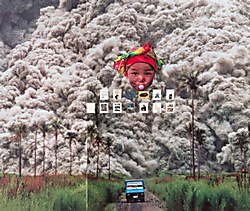 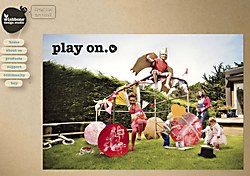