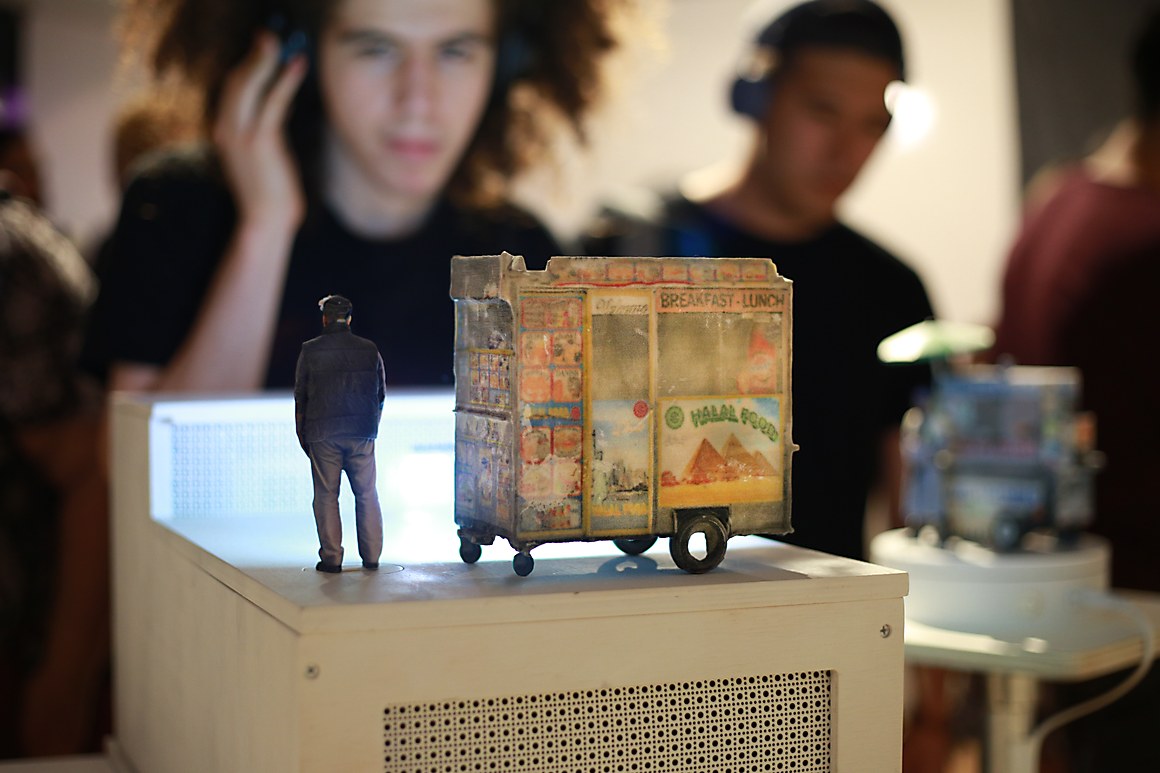 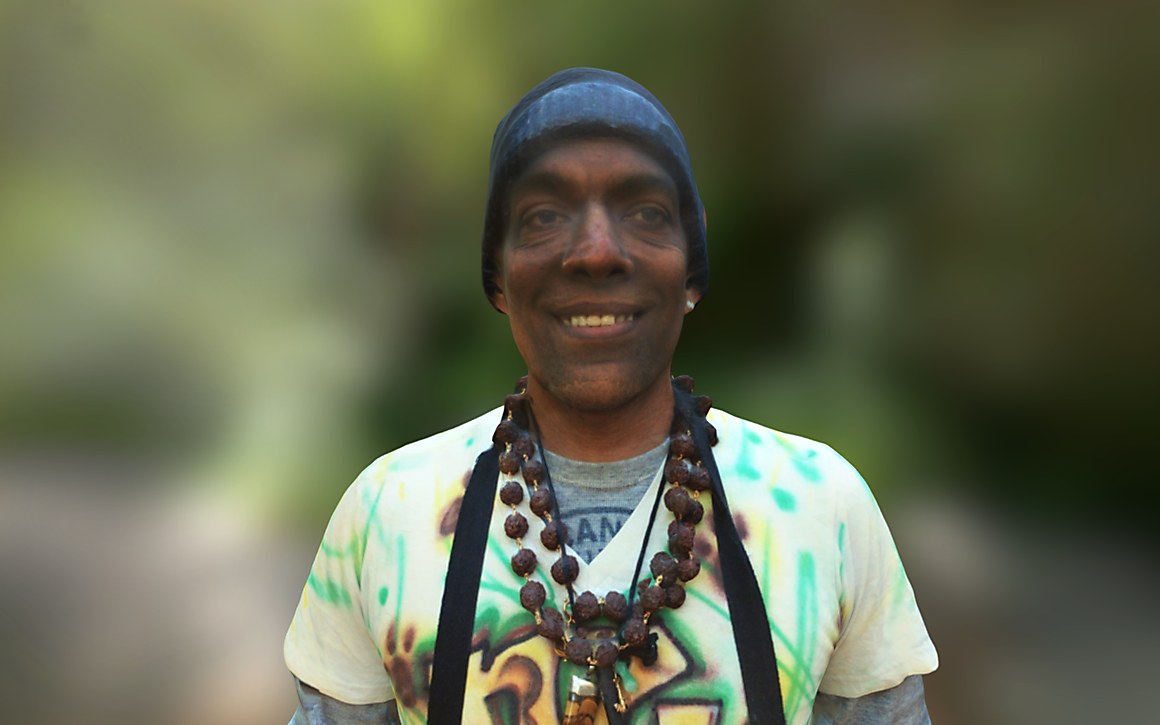 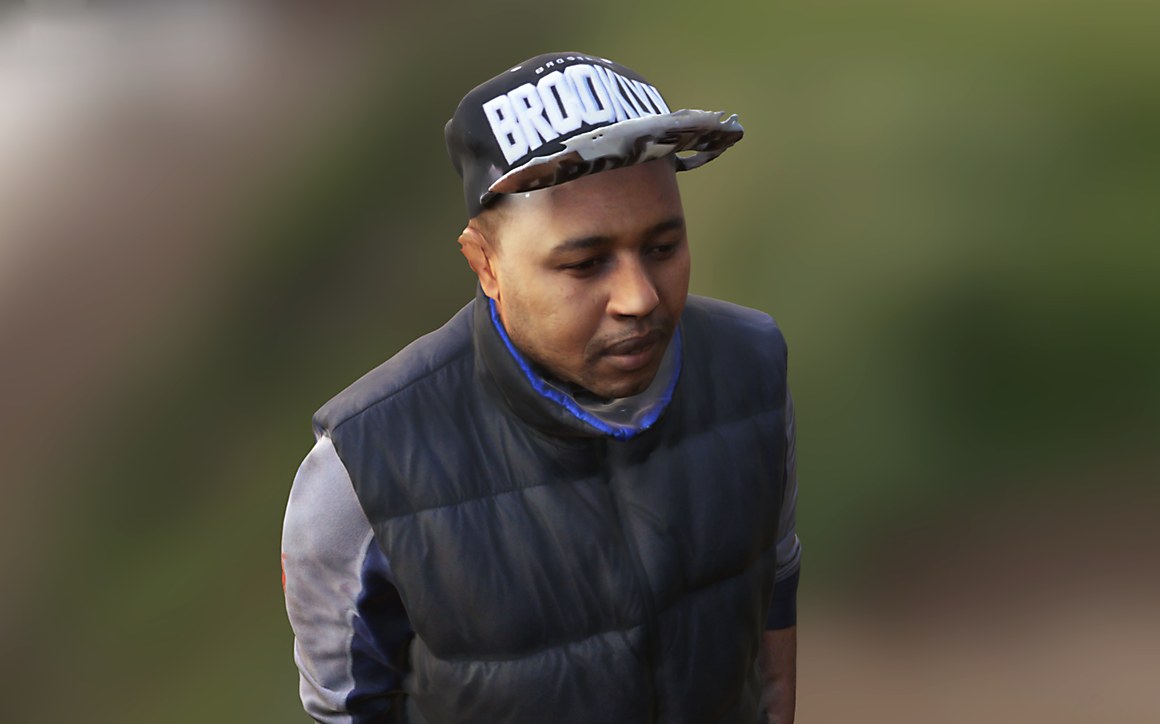 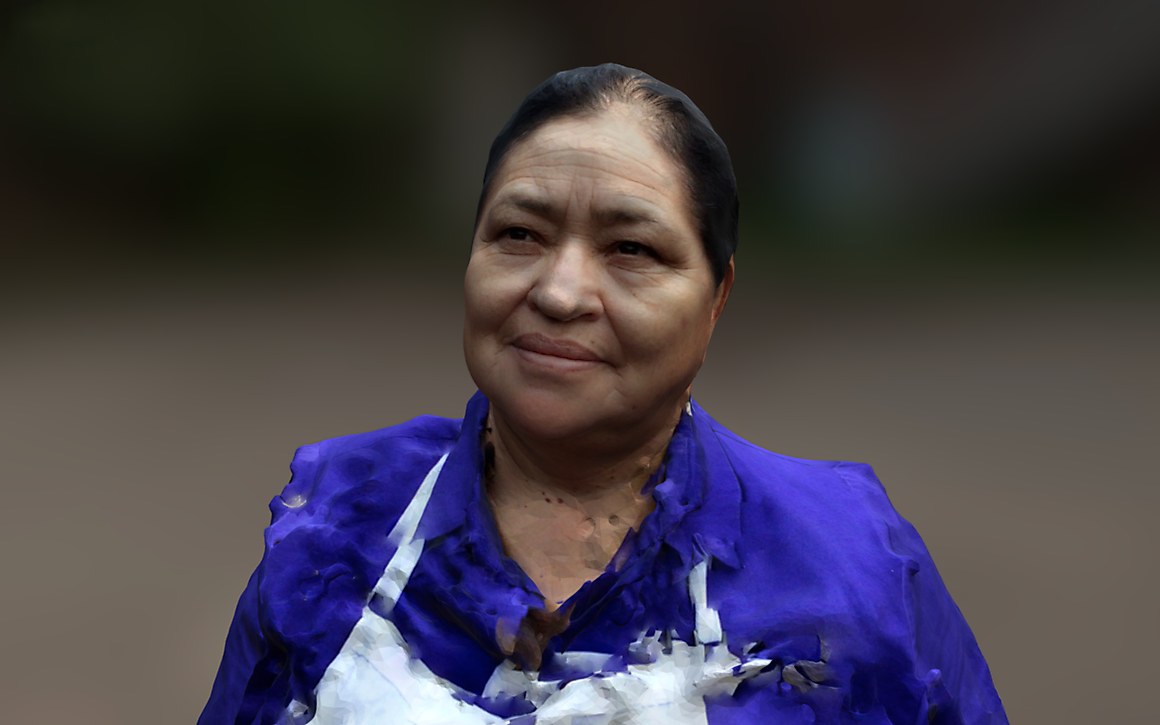 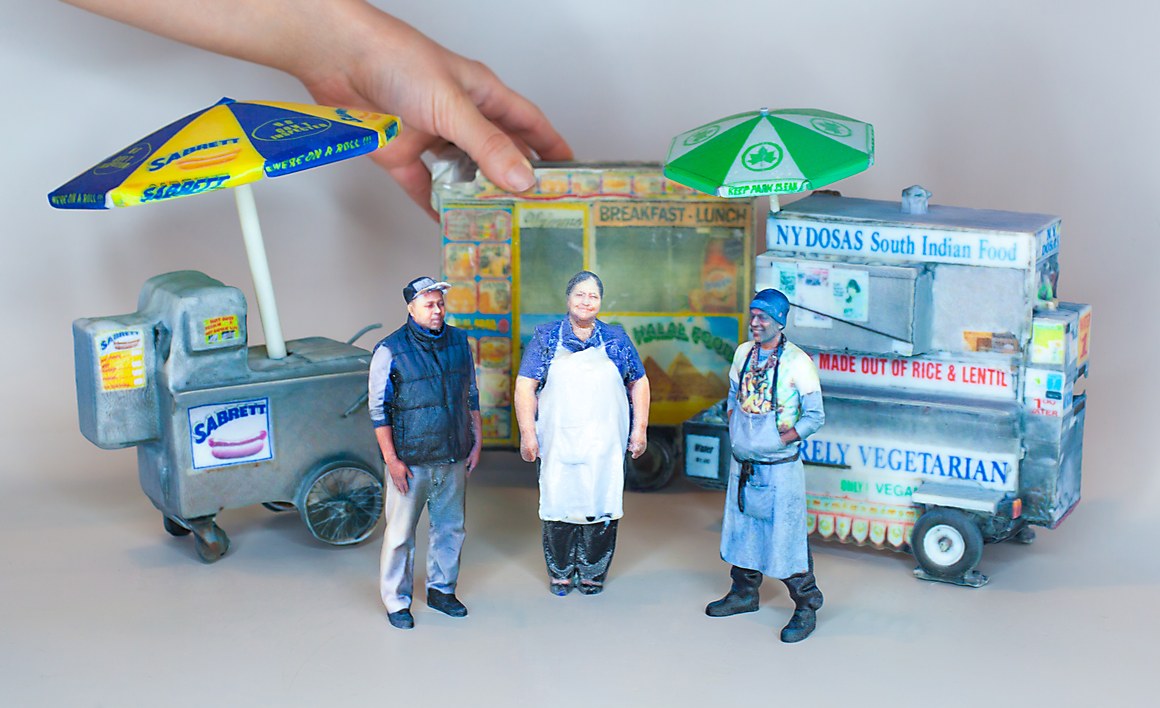 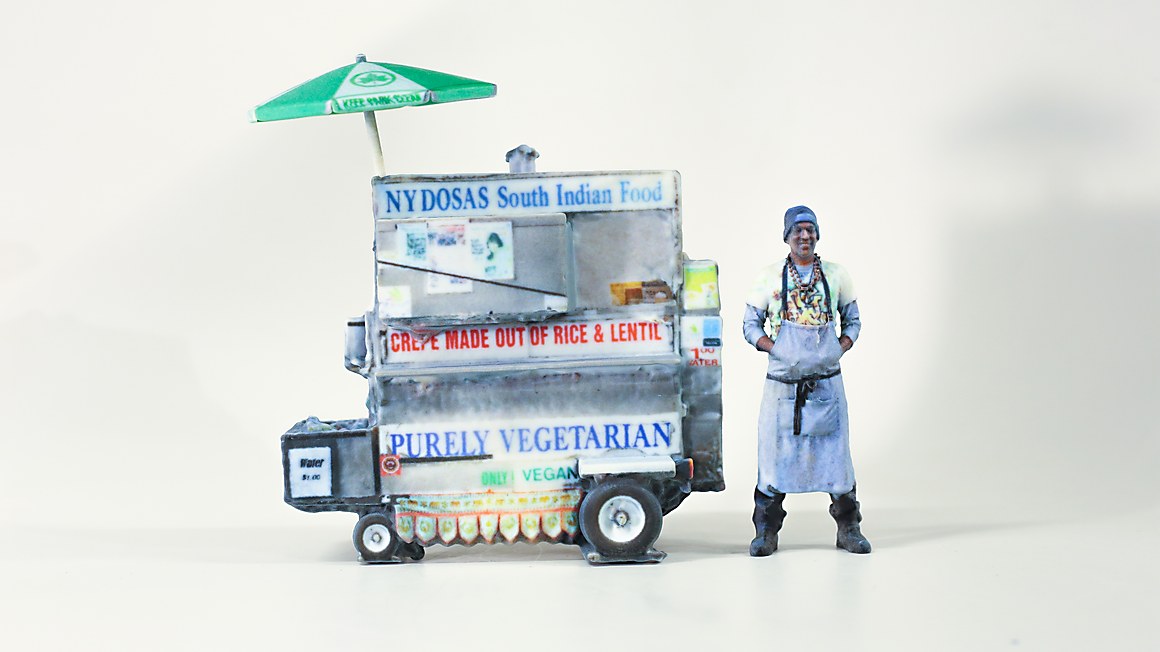 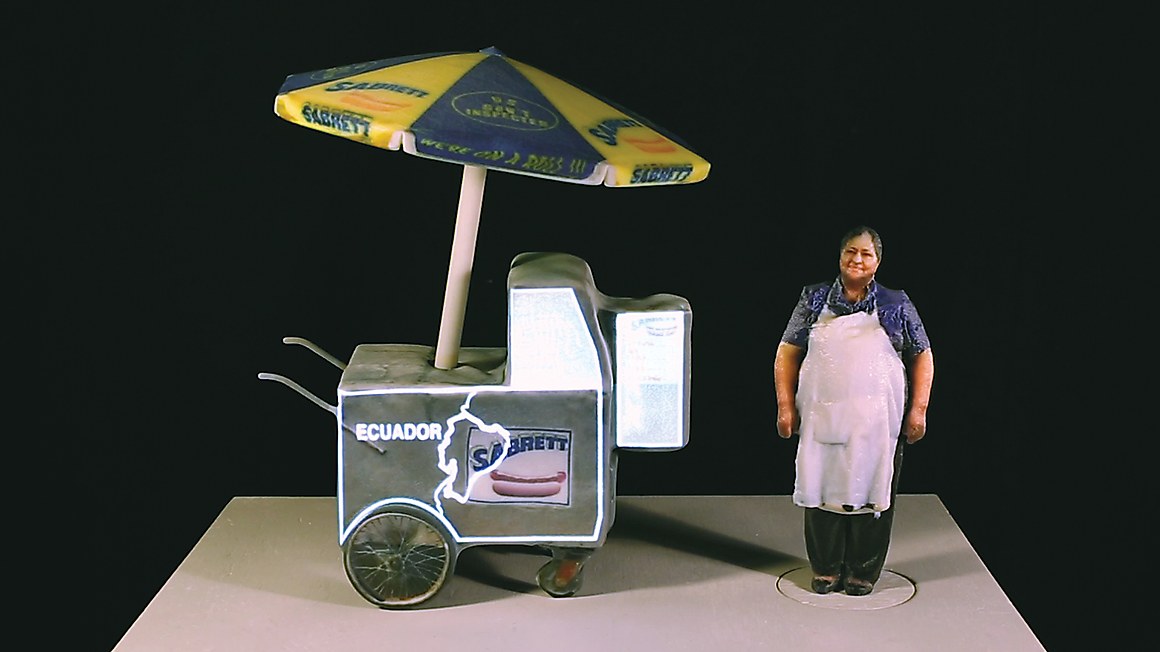 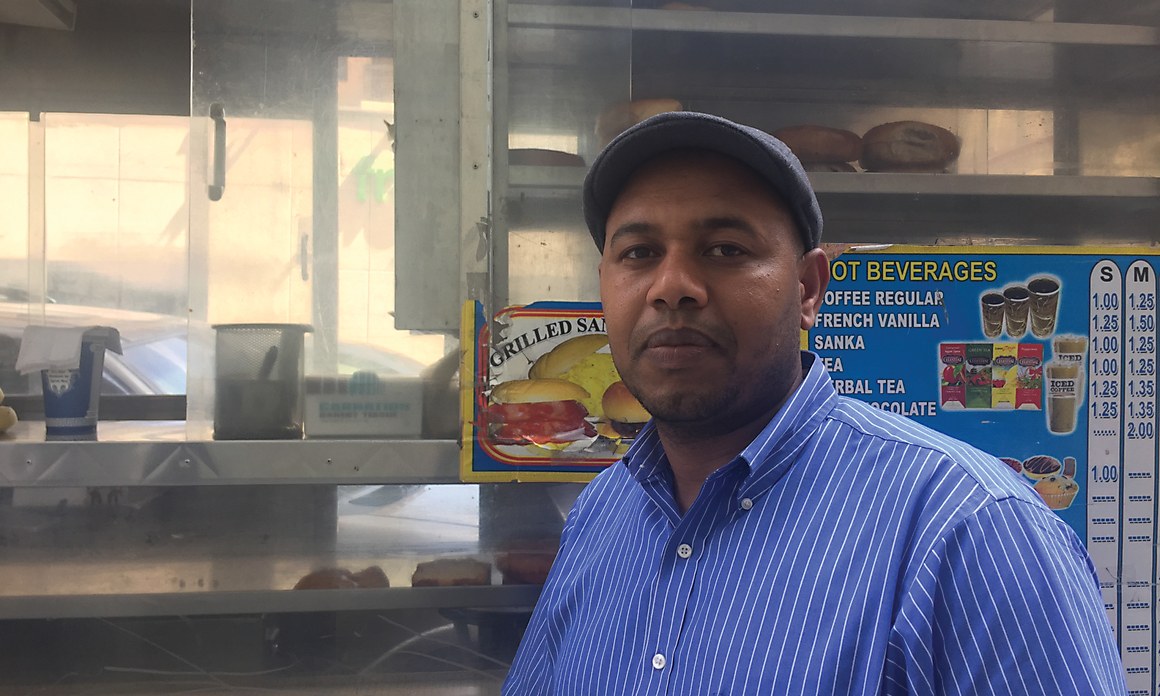 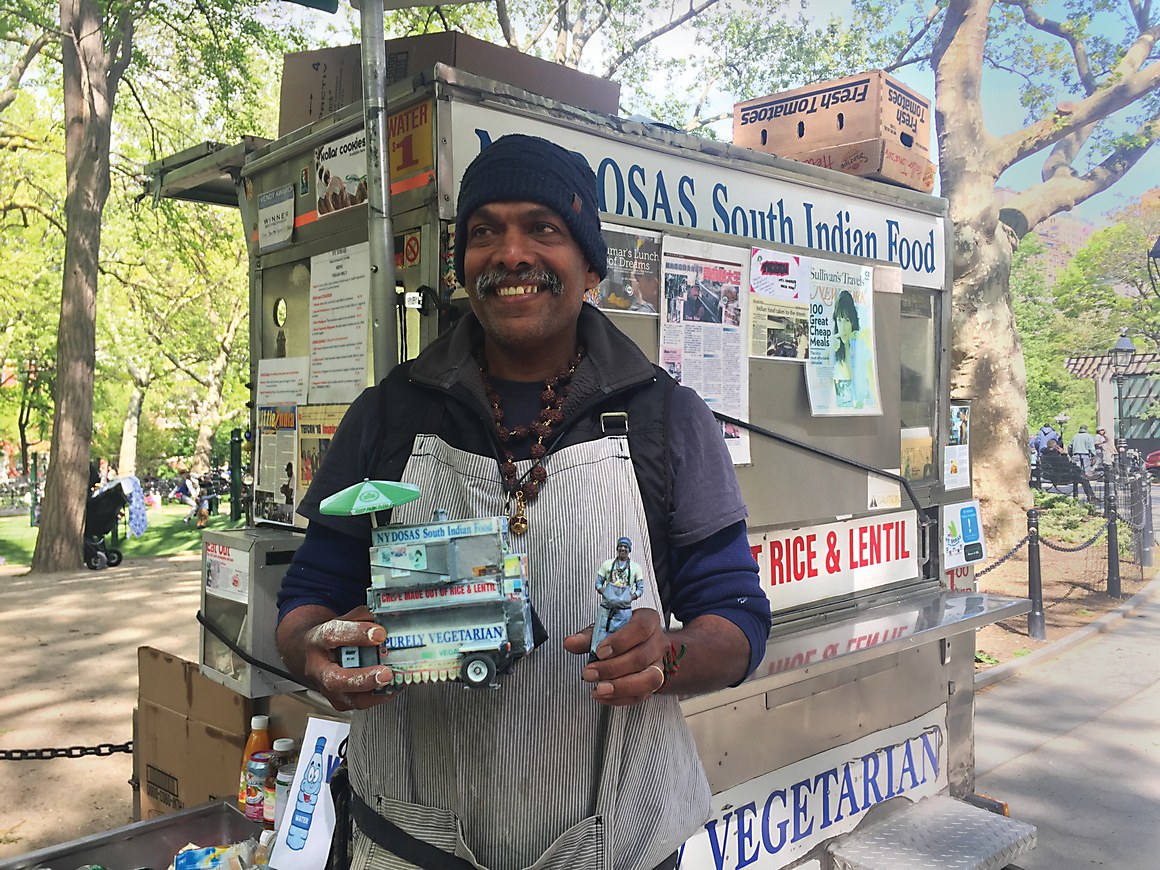 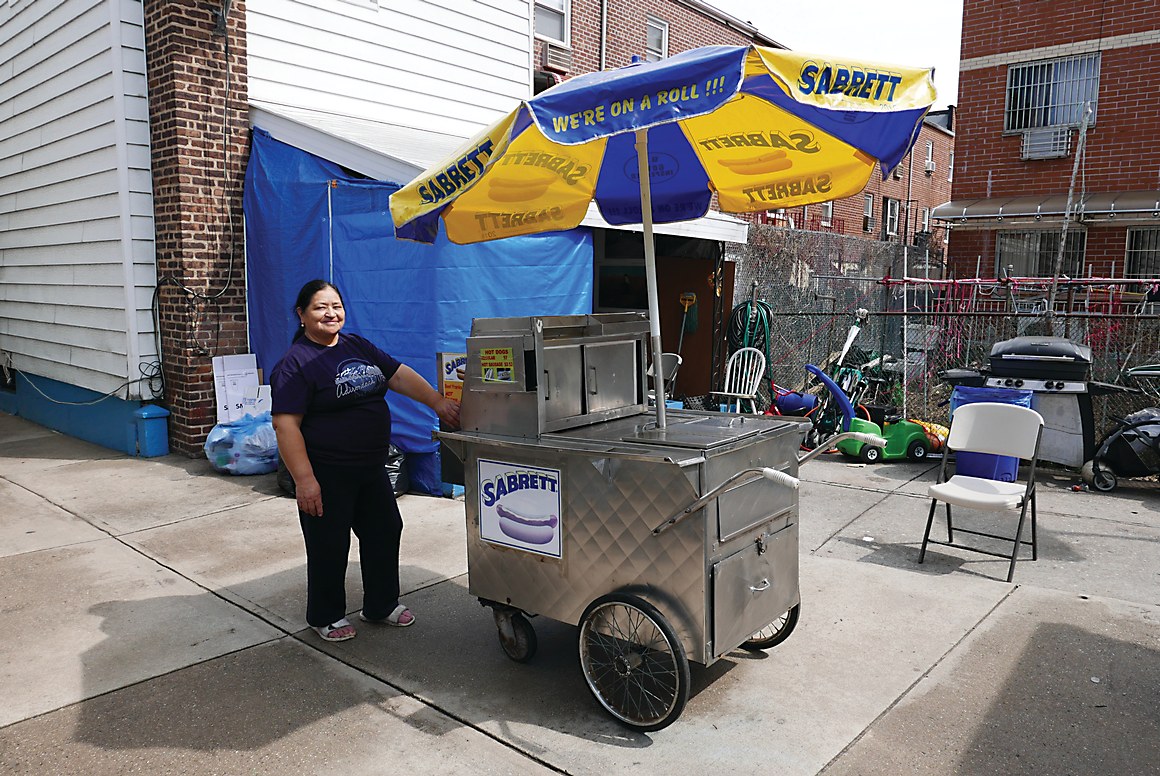 “Bringing attention to the people we walk by every day, but never notice, is tricky. This installation manages to tell their stories in a visual and compelling way.” —juror Eva Mautino

“I liked how the artist told big stories through a miniaturized medium, contrasting the older format of audio with the new, through 3-D printing. The little details are what make the stories that much more interesting and inviting.” —juror Stephen Hadinger

Overview: The installation Hidden in Plain Sight shares the unheard stories of those who work in every corner of New York City: street food vendors. In this series of portraits, each work features video and audio merged into small 3-D-printed high-fidelity sculptures of food carts and the people behind them: Ana Herrera, Dany Hassan and Thiru Kumar. When users interact with a food cart, audio is triggered, and the vendor starts sharing her or his story. As listeners learn about each vendor as well as the city’s complex street-vending system, minimalistic animations are mapped on top of the carts.

• Michelle Hessel produced the installation between January and May 2017 for her thesis project.
• The project was shown at New York University’s Interactive Telecommunications Program Spring Show 2017, where 1,500 people saw it.
• People can learn more about the project at the website hiddeninplainsight.xyz.

Comments by Michelle Hessel:
Why did you focus on street food vendors? “After moving to New York, I started noticing the vendors across the city. I found out that immigrants make up 90 percent of the street-vending community in the city. I also learned that—due to the limited number of legal permits—there is a black market to rent someone’s permit for two years. Bids can go as high as $25,000 for what would normally cost less than $800.”

What are the project’s core features? “The stories behind the food carts. Thiru Kumar is a very successful Sri Lankan vendor who is proud to serve his vegan food in Washington Square Park. Dany Hassan is a Moroccan man who, like many others, came to New York following the American dream. He has a daughter and a wife who live in Morocco; he sees them through WhatsApp. Ana Herrera is an Ecuadorian woman who has served hot dogs and tamales in Corona, Queens, for many years. She owns two push carts—but because of the city’s cap on the number of street vending permits, she has to keep them at home.”

What software, back-end technology and programming languages were used? “I used Photogrammetry to scan the carts; it took 637 pictures to get every detail of Kumar’s cart. To scan the vendors, I used Structure Sensor, an infrared sensor for mobile devices. It enabled me to capture the dense geometry of the human body and create high-fidelity 3-D models with detailed textures. Still, I had to do a considerable amount of post-production work in 3-D modeling software to make my models printable. After many tests, the final versions of the models were 3-D printed in full color. For the cart visuals, I made sketches, animated them in After Effects and projection mapped them on top of the small sculptures.”