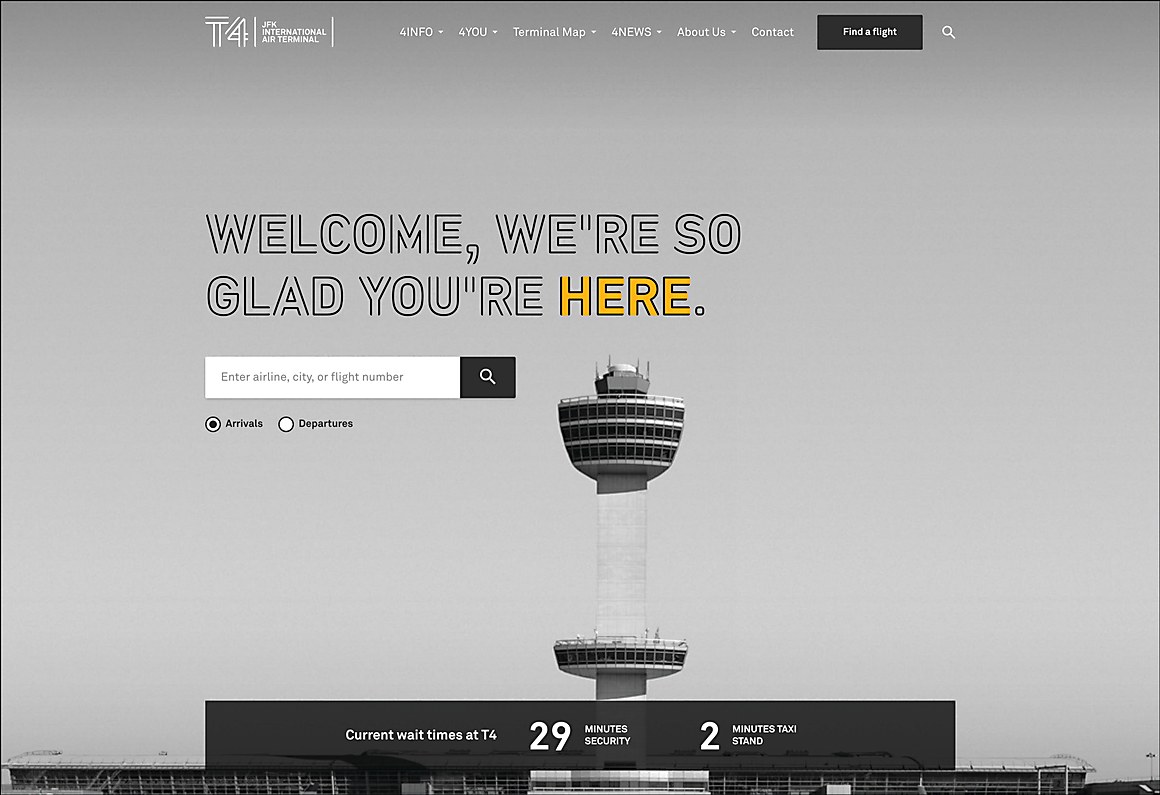 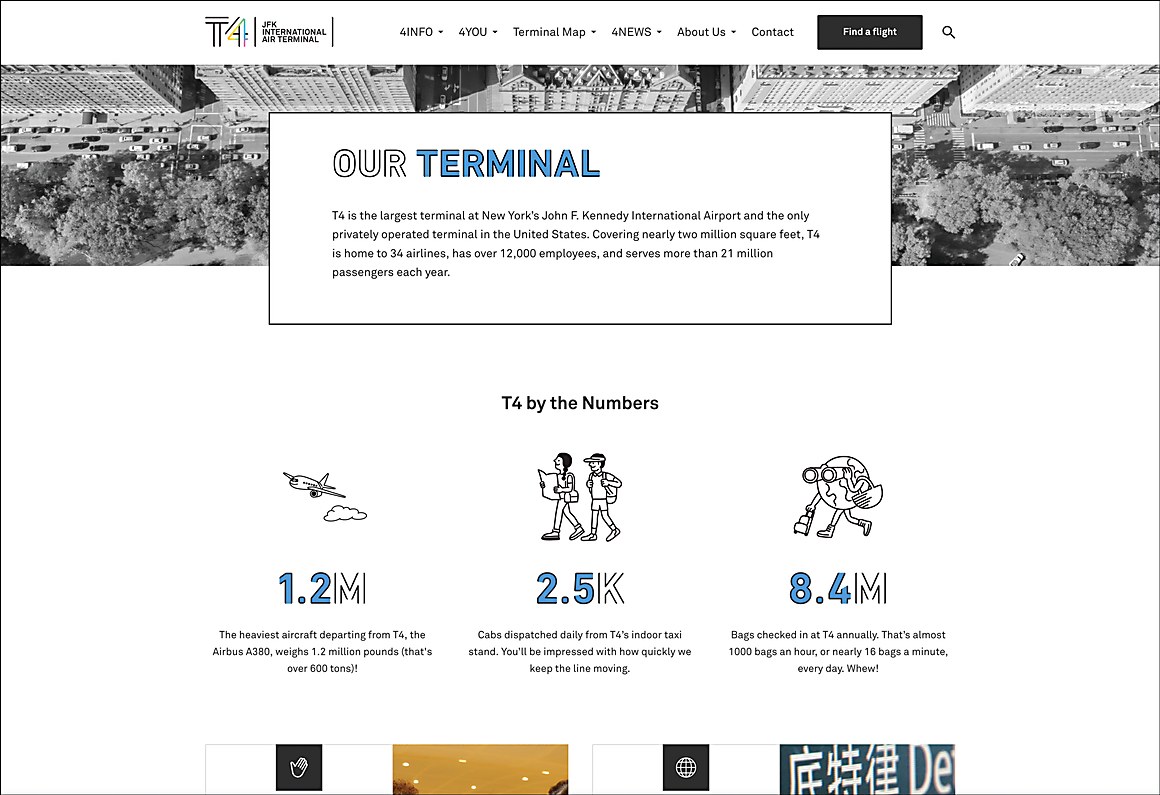 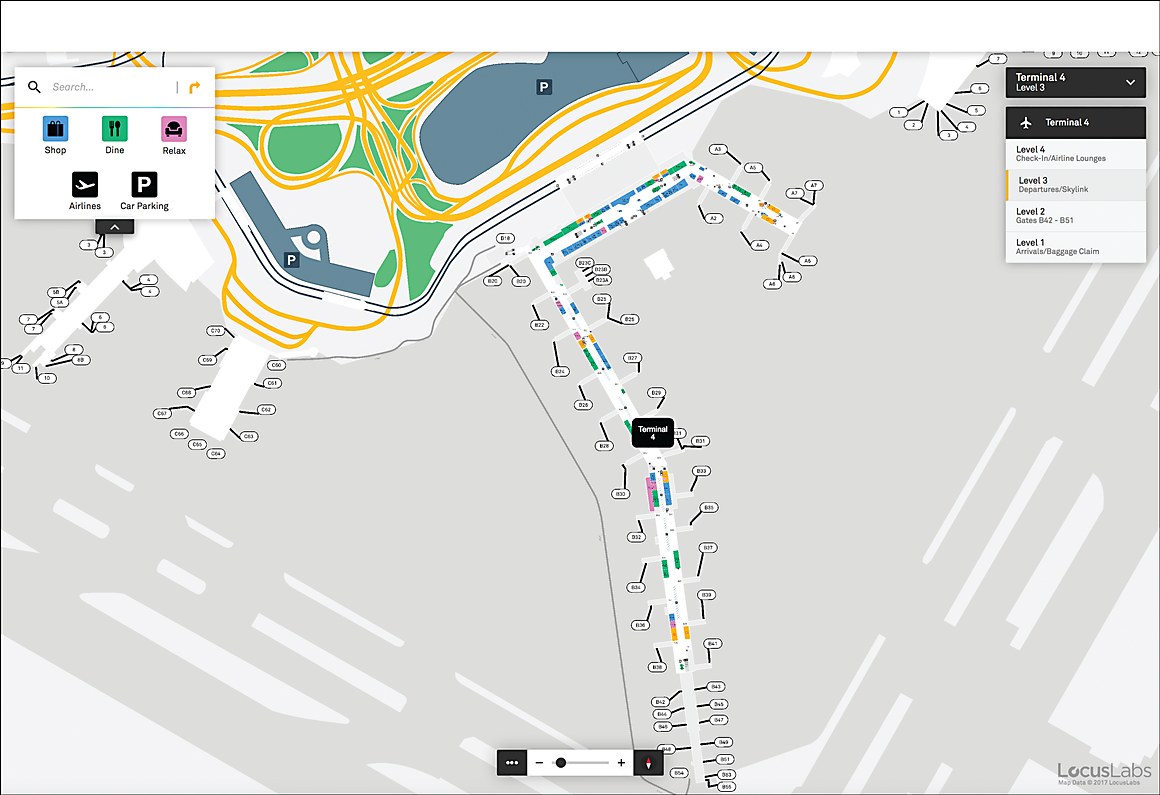 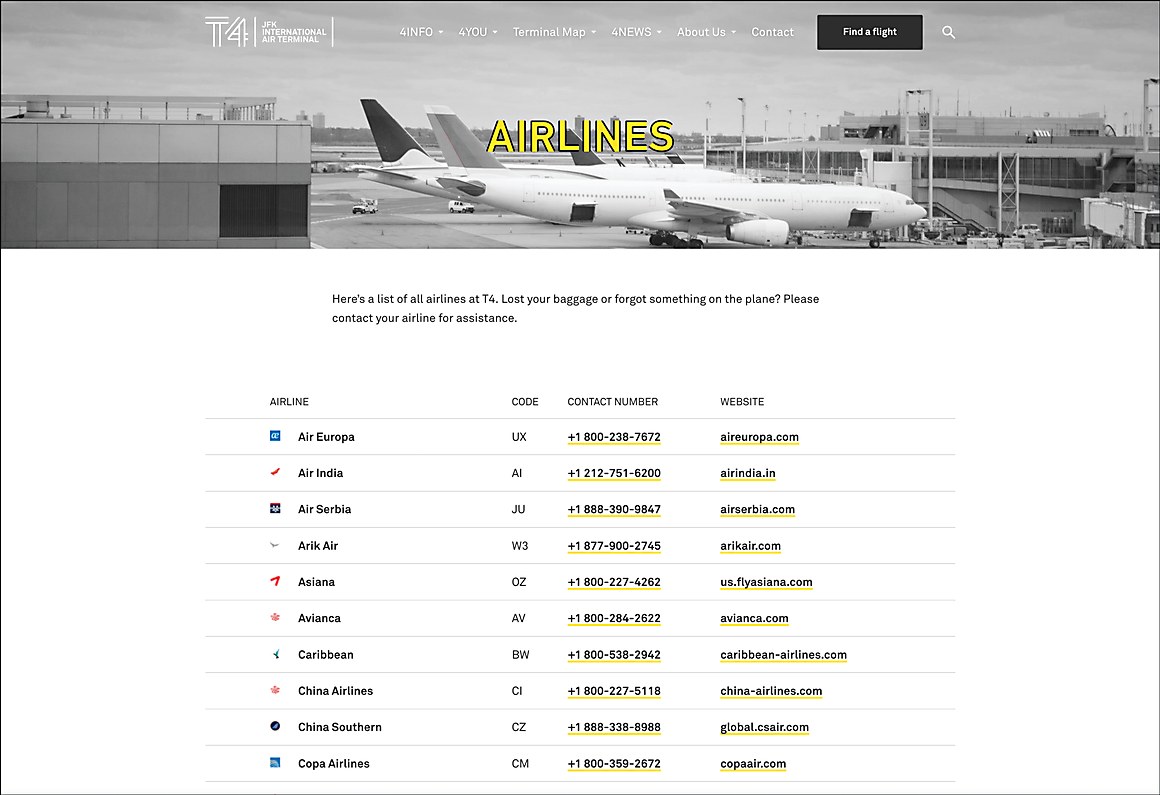 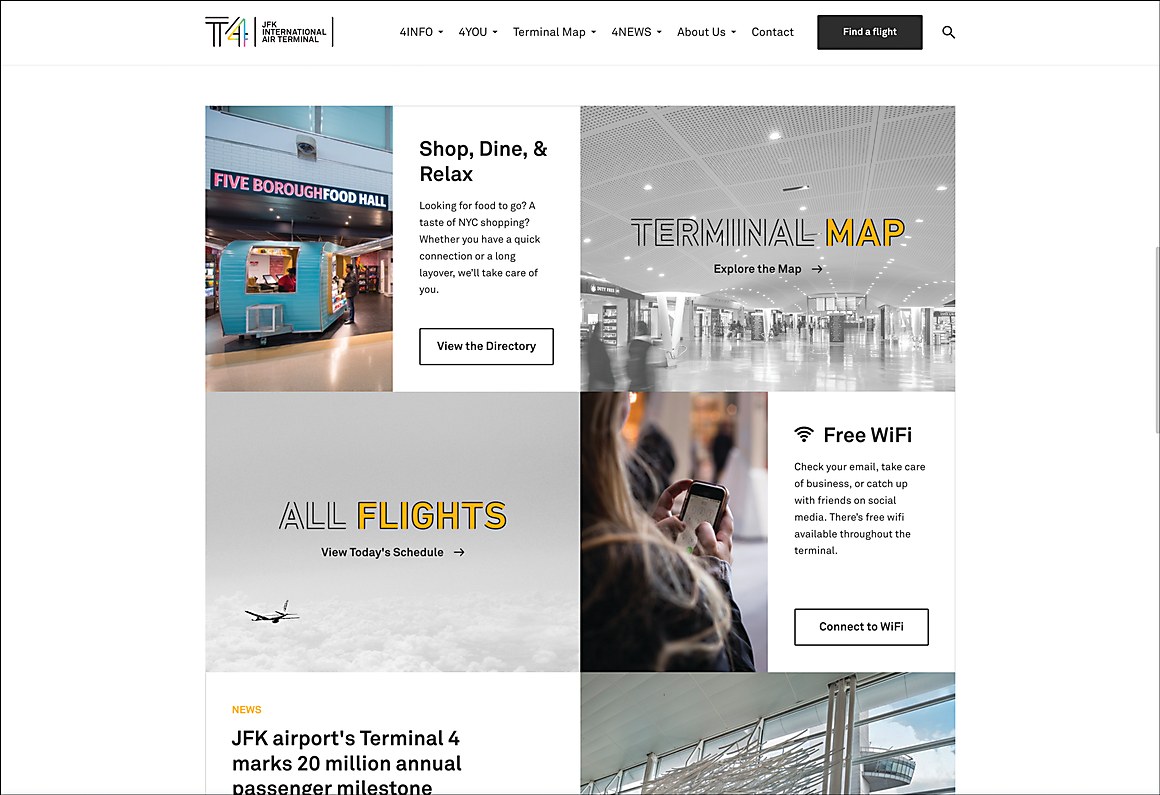 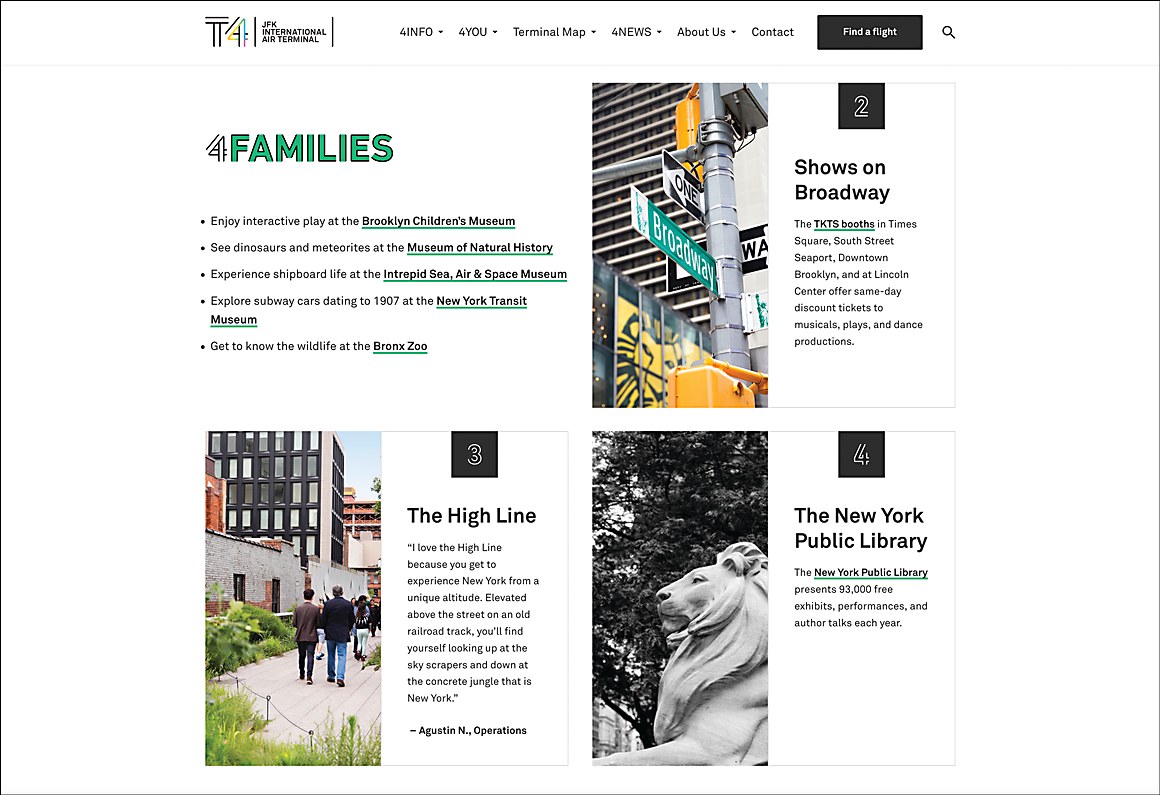 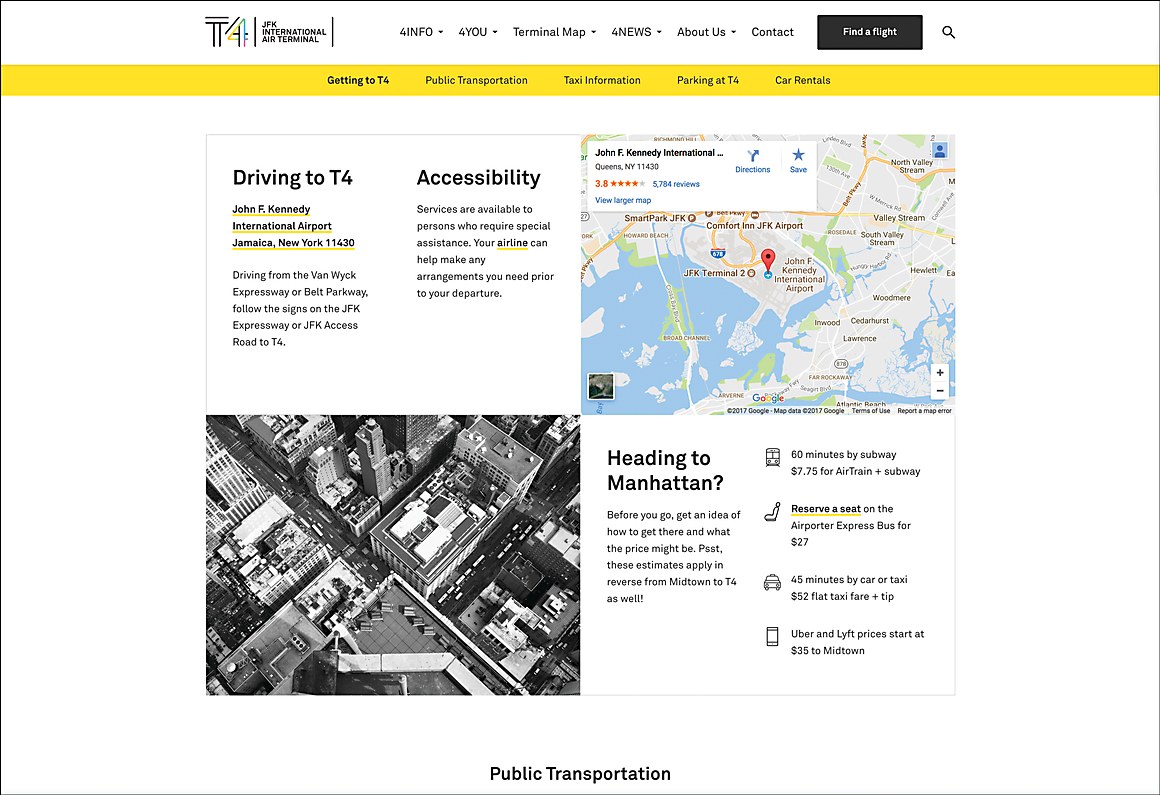 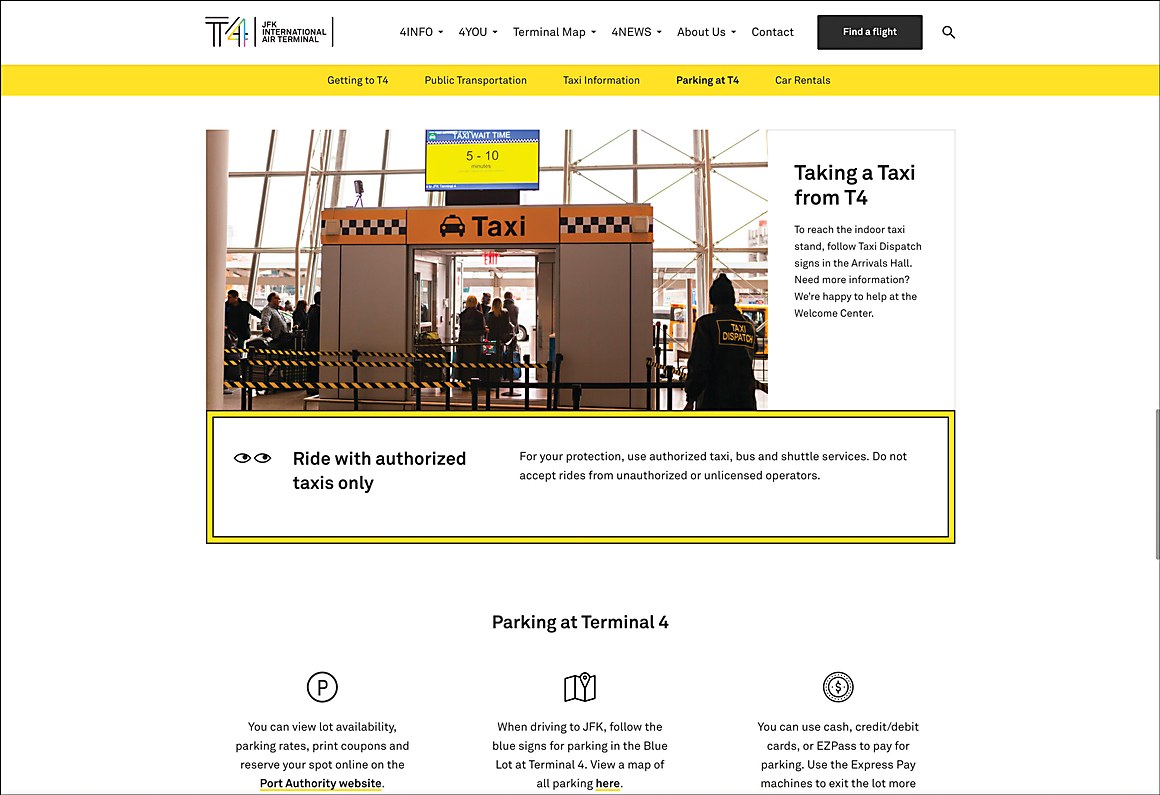 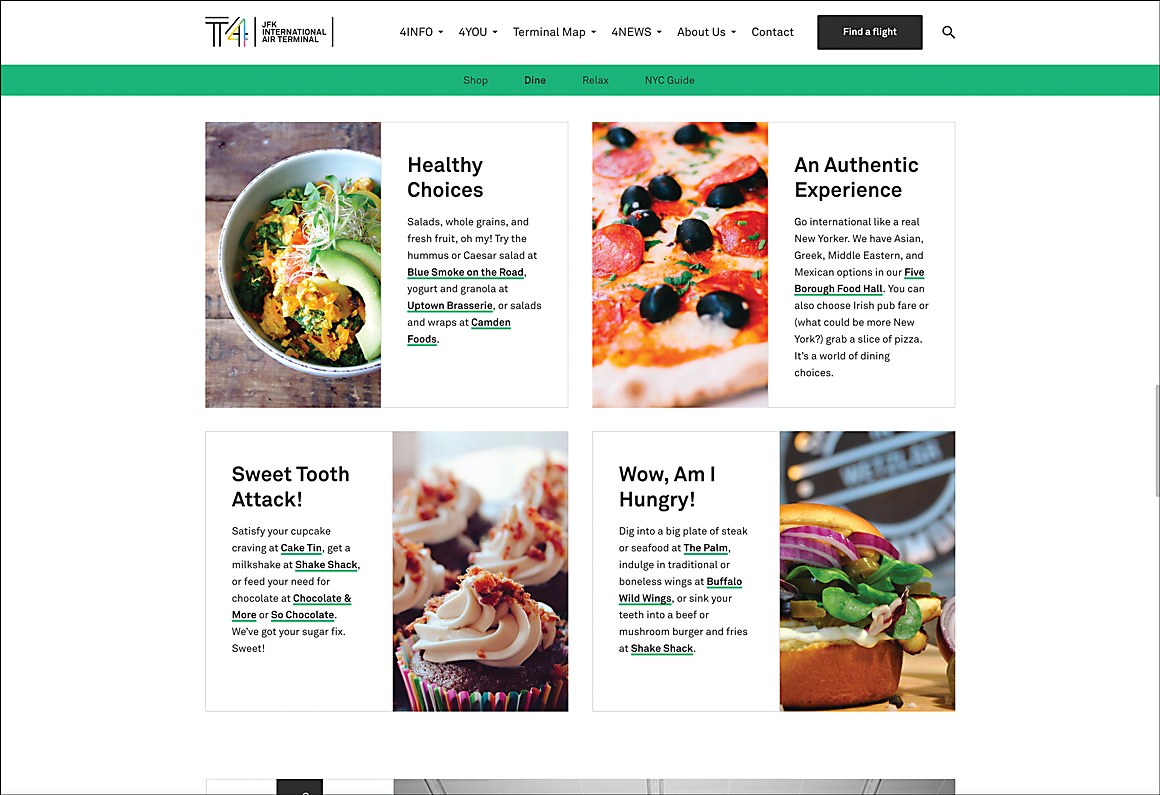 “Finally, a well-designed and easy-to-navigate airport terminal experience. Why can’t they all be like this?” —juror Eva Mautino

“It’s not every day that one witnesses a cool airport website. I appreciate the design aesthetic and ease of use.” —juror Jason White

Overview: If you’ve ever got a layover at John F. Kennedy International Airport, make sure to stop by Terminal 4 (T4), the only privately operated terminal in the United States. T4 and its operator, JFK International Air Terminal LLC, had recently undergone a rebrand, and T4 was in need of a new digital presence that not only serves as a hub for traveler information, but also cements T4 as a leader in the aviation space. So Brooklyn, New York–based firm Ronik Design built a site from scratch, with project management and brand strategy from communications firm Marino. The result, which offers everything from a flight tracker to a searchable terminal map, makes flying into and out of T4 a breeze.

• The site contains more than 300 individual images and illustrations.
• Ronik used Node.js, Nunjucks, Sass, Serverless, TakeShape and Vue.js to create the site.
• The project took around eight months to complete.

Comments by Nicole Barth and Mark Catalano:
What was the most challenging aspect of the project? “Dealing with the dynamic custom typography in the browser. The custom type—created by Base Design and called Terminal Four Open and Terminal Four Filled—is cool and clever. It was inspired by the lines of the airport tarmac and designed for use as headline and display text, as well as the T4 logo. We built a toggle into the content management system that enables editors to assign colored fill text to specific words for emphasis, and used alternate ligatures for the 4 glyph and the T4 characters. We wanted these characters to match the logotype whenever they are used in headings. Using the ligatures adds polish to the design.”

What was the thinking behind the navigational structure? “It is influenced by the principle of ‘guide and delight.’ It was important for us to accomplish two things with the navigation: be very clear and direct with users, and let T4’s brand personality shine. We used the branded prefix 4 on appropriate navigational elements, such as in ‘4INFO’ and ‘4YOU.’ The navigation on the main page has large flyout panels, which display subsections and subpage links as well as friendly phrases. We also provide several jumping-off points, especially from the homepage, to expose important areas of the site.”

What are the project’s technical features? “One of the most unique things about the site is the URL. With the decision to go with a nontraditional top-level domain, JFKT4.nyc definitely makes a statement over JFKT4.com. Everyone agreed that we needed to project the pride that T4 has for being a part of the city. John F. Kennedy International Airport is such a quintessential part of New York, and using the .nyc puts a big sign on the front door that says that T4 is a proud New Yorker.”