The Fabric of America 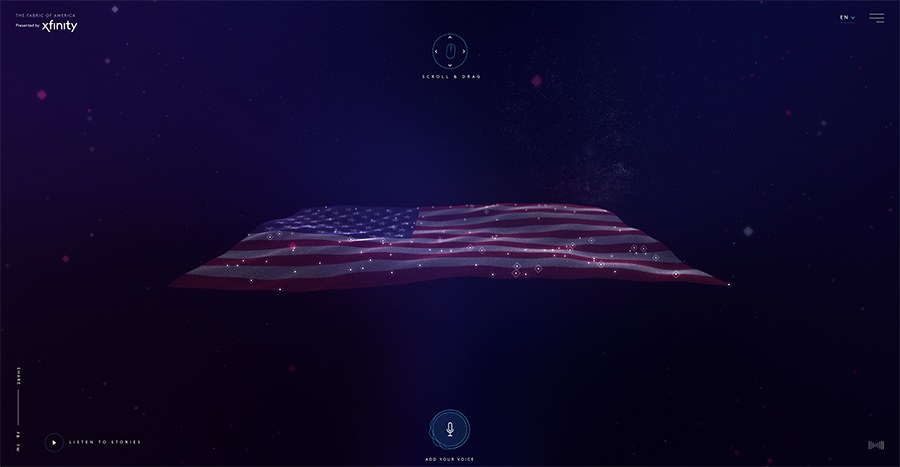 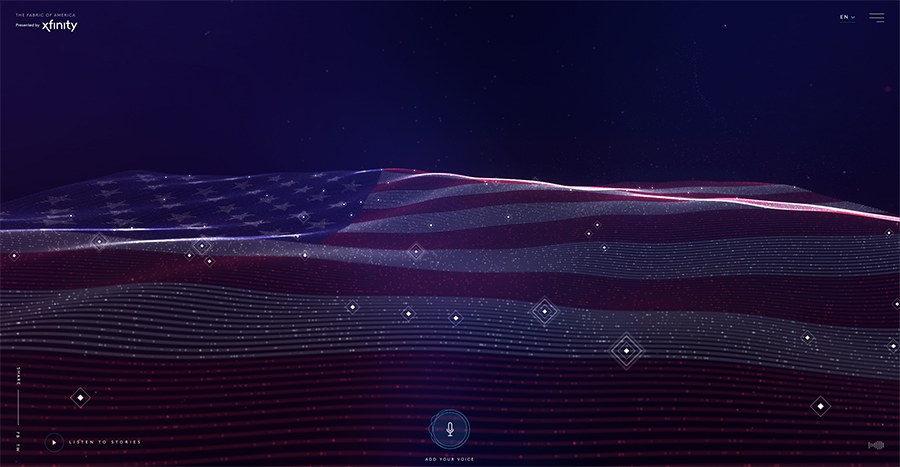 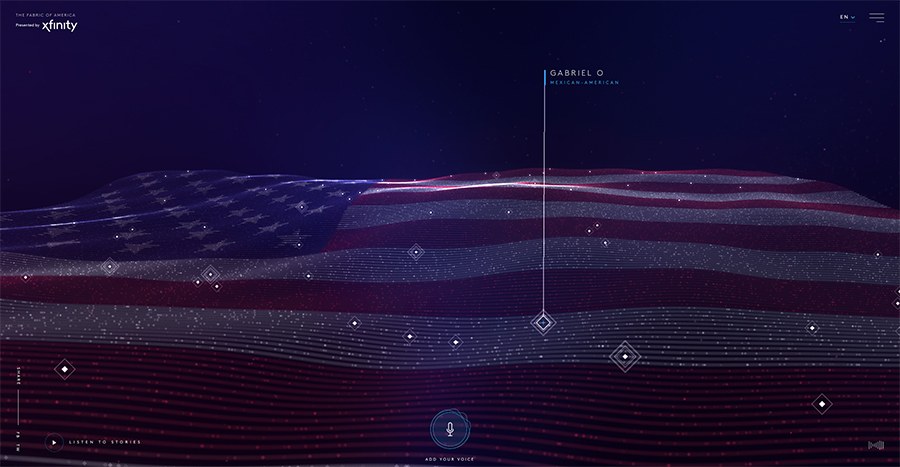 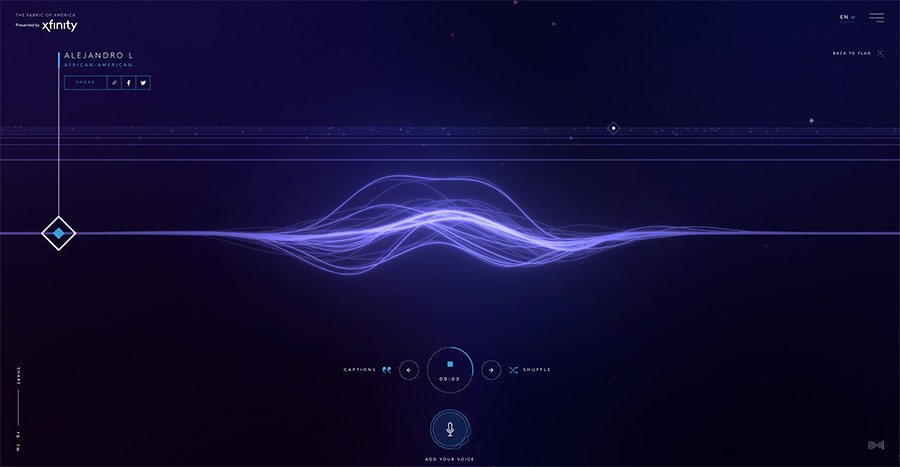 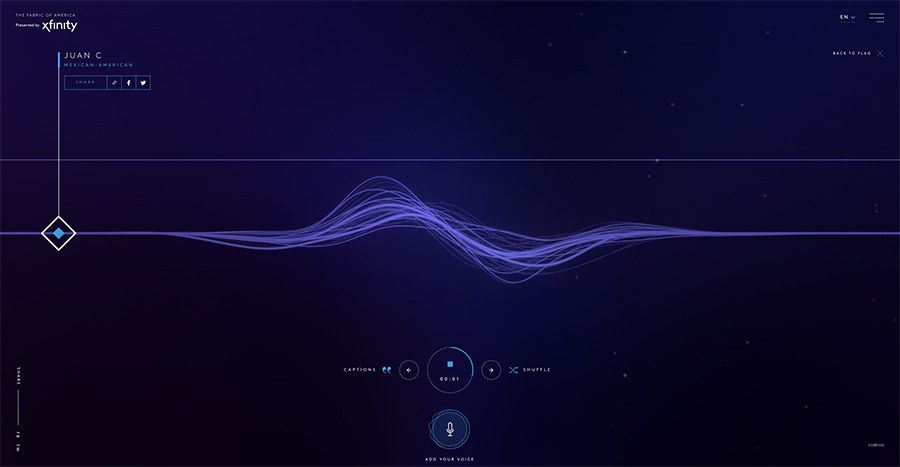 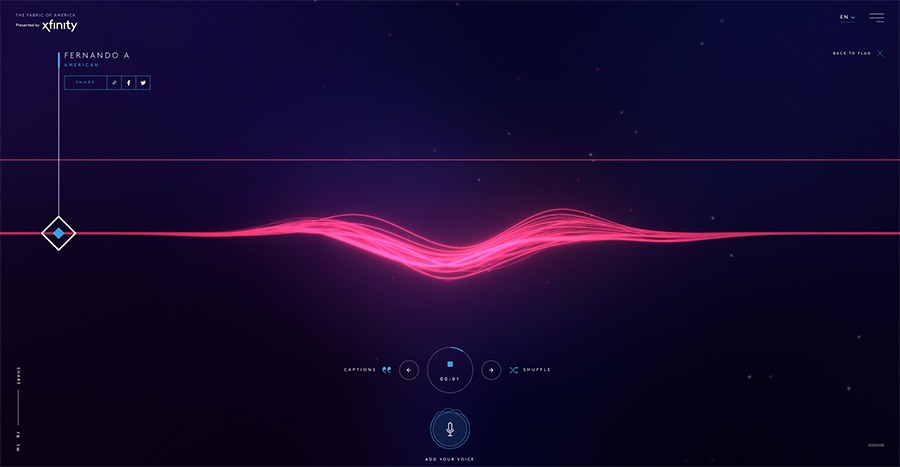 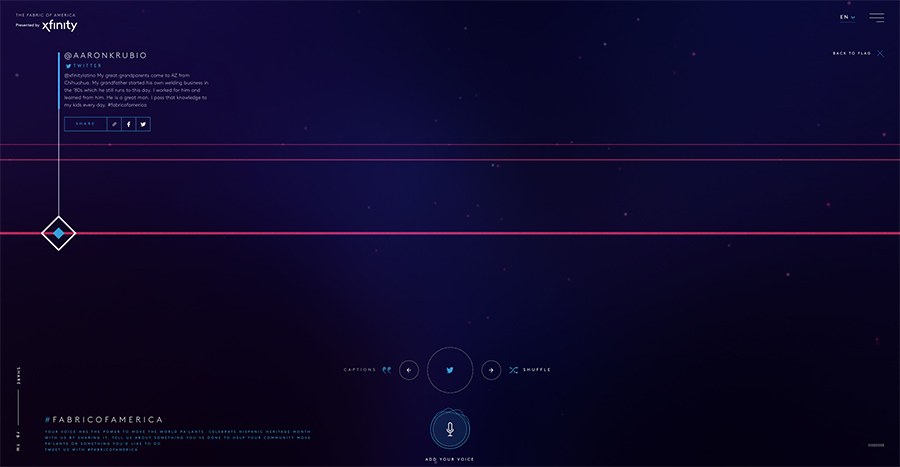 “A simple way to promote understanding is by listening to the voices and personal stories of others.” —Nathan Martin

“A beautiful example of how effectively a few minimal elements of sound, imagery and controls can convey a powerful message and make a connection.” —Aruna Mall

Overview: Created by digital design agency CANVAS United and ad agency GALLEGOS United, the Fabric of America is a living, breathing, interactive American flag made up of Latino voices that move the United States forward, visually representing how diverse voices make up the nation’s tapestry. By letting visitors add their own stories of strength, resilience and inspiration to the undulating flag, the website shows the beneficial contributions of the Latino American community to the United States.

Comments by Taua Baccarin, Christopher Calarco and Harvey Marco:
Was the project part of a larger promotional campaign? “The site is part of a campaign that celebrates the sentiment and spirit of echando pa’lante juntos, which translates to ‘moving forward’ together. On a deeper, more emotional level, the expression pa’lante encourages resilience and persistence in times of hardship. The Latino mindset is hopeful, strong and positive, and has an undying will to better themselves and those they love. The website’s role in the campaign was to allow visitors to listen to and contribute their stories of how they are moving the country ‘pa’lante.’”

Does the site have any special interactive features? “A signature feature is capturing the voices of visitors through their device’s microphone. Analyzing the recording’s frequencies, we were able to visualize a custom sound wave that becomes part of the digital flag. The final sound wave was designed to look like threads of fabric.”

Were there any extraordinary obstacles during development? “Two key features posed formidable challenges: the voice-recording feature and the waving 3-D flag. We wanted to realistically portray the motion of the flag, but we realized that the more movement added to the flag, the more difficult it was to navigate the site. We worked tirelessly, tweaking values to strike a balance between form and function where the flag felt dynamic while users could still interact with the diamond navigation points. For the recordings, our development team had to find cross-platform solutions to capture people’s voices on any device—and then visualize the recorded audio by mapping the frequencies of voices to data points, which would then influence the animated sound waves during recording. Keeping the sound wave animation within a desired range of motion required testing of a wide array of voice types to find a happy medium.”