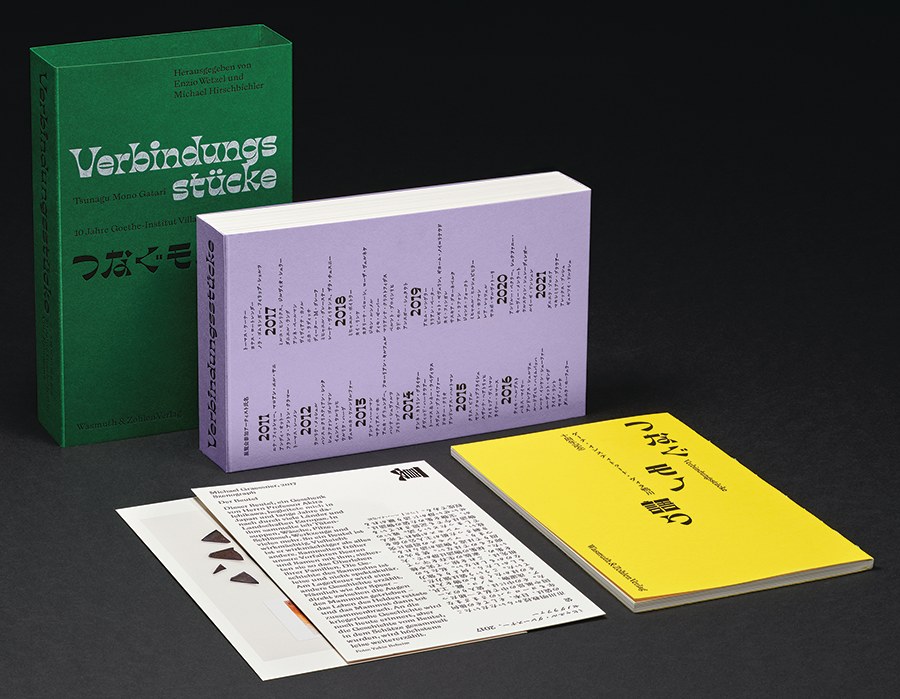 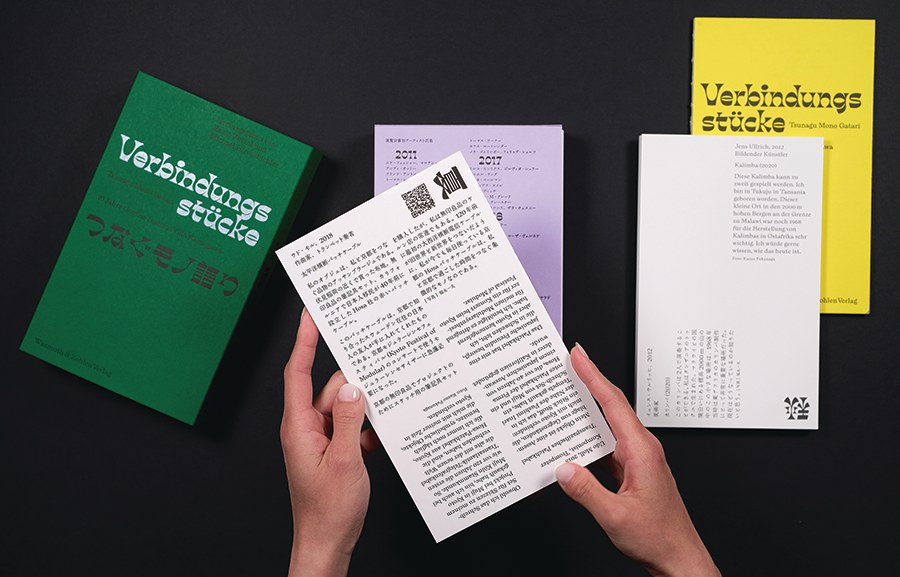 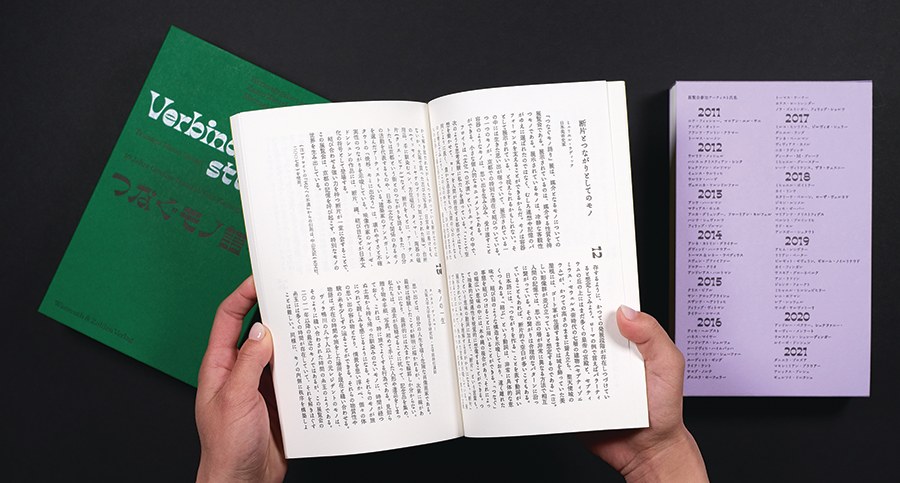 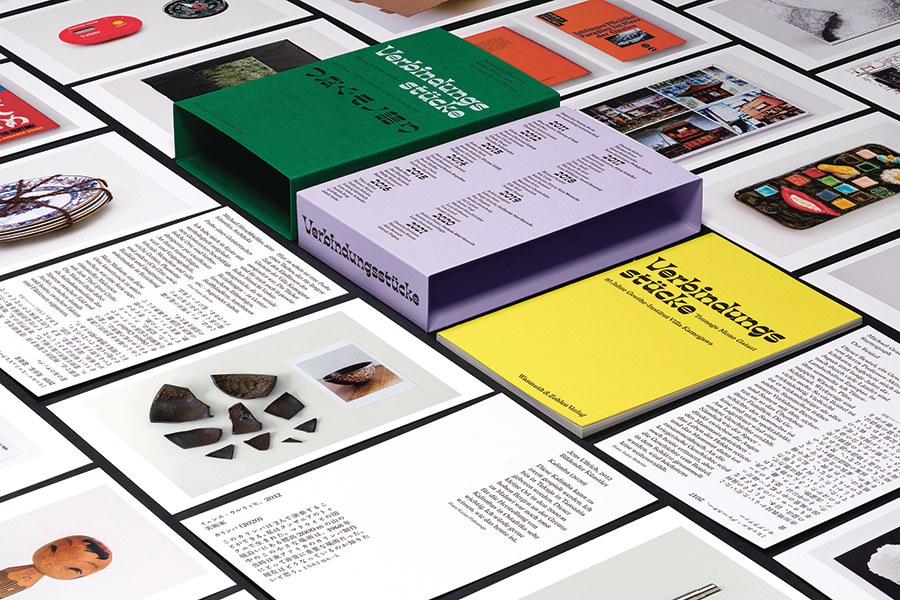 “This project is beautiful. The type selection was perfect. [The designers] made some decisions based on how you read in the different cultures. I felt the accuracy with every choice.” —Daniela Castiblanco

“The designers cleverly integrated two languages, each with entirely different character sets and orientations, in ways that complement and mimic one another while simultaneously providing enough contrast to create a very energized, dynamic fusion of two cultural expressions.” —Ryan Crouchman

Tell us a bit about yourselves and your creative practices. “We are both typographers first,” says Toshiya Izumo, “but also have several other interests and activities that we pursue. I am also a type designer, an expert on pictograms, and a consultant for Chinese, Japanese and Korean scripts.”

“Designing typographic systems for complex text is my specialty,” says Ferdinand Ulrich, “preferably publications on art, design and architecture with plenty of footnotes and captions, among other things. The other half of my time, I pursue academic research in type history and also enjoy teaching and writing.”

How long have you worked with Goethe-Institut Kyoto? Have you ever collaborated before? “This is our first project with the Goethe-Institut,” Ulrich says. “Our connection was established through Michael Hirschbichler, an alumnus of its artist residency in Kyoto and curator of the exhibition and catalog, and to whom Toshiya and I had both given some typographic advice on a previous German-Japanese publication.”

“Ferdinand and I met fifteen years ago while both studying information design at the Berlin University of the Arts,” says Izumo. “We formed a team for a class-internal competition and have been friends ever since. After graduating, we worked in design studios across from each other on the same street for several years and kept in touch. Our collaboration on the art catalog has sparked a new project: Edition Schrift, a multilingual platform for publishing, type and typography.”

What is the concept behind the design of Tsunagu Mono Gatari / Verbindungsstücke? “The project brief considered publishing 73 separate artist cards and a brochure, so it was up to us to find an appropriate solution [to publish them all],” Izumo explains. “Together with Daniel Klotz at Berlin-based print shop Lettertypen, we came up with the idea to cover everything in two wrappers. The unboxing experience of the catalog slowly reveals each color from solid green to quiet lavender to surprising yellow, a palette carefully selected by textile designer Nari Haase.”

“Oftentimes, bilingual publications tend to lean towards a primary language—something we absolutely wanted to avoid,” says Ulrich. “We treated both languages equally. The catalog does not have a front and a back but two front covers with two spines. The different reading directions of German and Japanese played into our hands: in the brochure, the Japanese text starts on one side, the German text starts on the other and they conveniently meet in the middle.”

What typefaces did you use for the artbook? “Selecting the typefaces for the main text was a typographic convergence,” says Izumo. “Ultimately, we selected Alessio D’Ellena’s Laica and Akira Kataoka’s Marumin Katura so they would complement each other.”

“For the titling, we were seeking a connecting element—a contemporary, unconventional typeface equipped with a character set that covered both languages,” Ulrich explains. “We discovered type designer TienMin Liao’s Ribaasu with its unusual reversed contrast. When it turned out that Ribaasu was not yet released, she exclusively donated the typeface to our project!”

Did you learn anything new during this project? “It was quite a joy to see Daniel Klotz print the letterpress covers on his own original Heidelberg Cylinder printing press,” says Izumo, “not because it is fancy or somehow nostalgic, but as the most appropriate solution for letters in black and white on green stock.”

“I already had a basic understanding of kanji and kana but learned so much more about Japanese typography from Toshiya,” Ulrich says. “It was a good opportunity to shake off some of my preconceived notions; I realized that an acceptable type size in one script may not be appropriate in another. Designing this catalog became our own typographic connecting piece.”