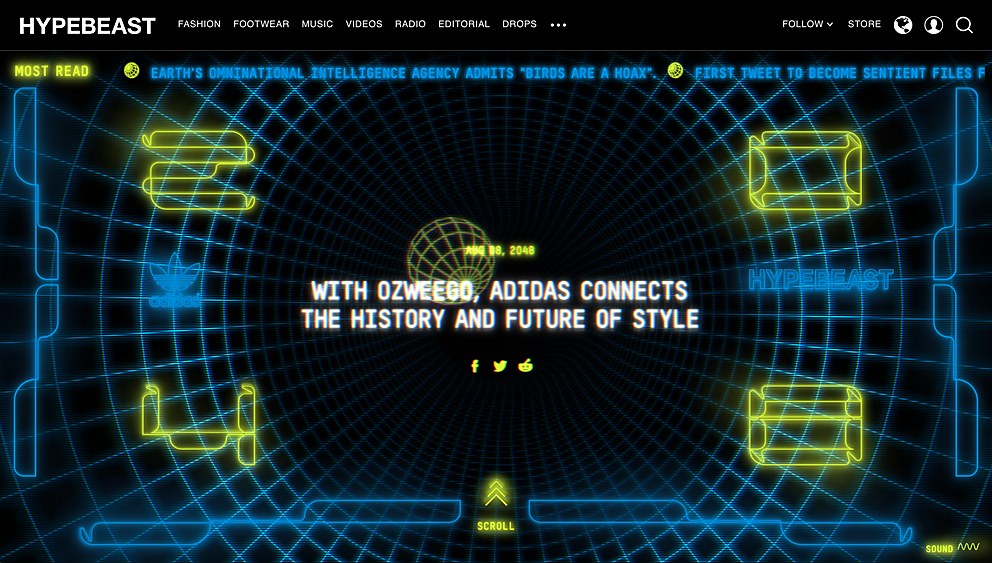 A wormhole brings you to the future of fashion on this Hypebeast site by Jam3 to promote the rerelease of adidas’s Ozweegos.

Background: We set out to create an article from the future that promoted the release of the new adidas Ozweegos, tied in closely to the sportswear brand’s social campaign and more broadly to its OOO campaign. We partnered with HYPEBEAST to bring the experience to life. The site was built in its ecosystem and targeted to its audience.

We helped adidas promote the Ozweego re-release campaign with an activation that transported visitors through a projection-mapped wormhole into a physical New York City bodega from the future. The site serves as the centerpiece for the digital campaign about seeing how the world has changed in the year 2048. It’s the most direct route to purchasing the product throughout the entire campaign and was heavily promoted on social media.

Design core: The site is broken up into two distinct parts. For the first section, we created a retrofuturistic wormhole into the future by leveraging a z-depth scroll mechanic. We wanted it to feel full, almost like you’re traveling through a future newsfeed, so we created small notification GIFs and graphic holograms that pass by you as you scroll. You also get your first taste of the product here as 3-D Ozweego holograms pass you by.

The second half is really when you start to interact with the product. We built a 360-degree model viewer that lets the user view the shoes from all angles. Below that, we built a lookbook from the future that showcases how the shoes could be styled in 2019, 2048 and 2078.

Favorite details: So many! It’s hard to choose. Our lead designer Danilo Nagura developed an incredible retrofuturistic aesthetic, full of semibrutalist holograms and a throwback wormhole that was extended throughout the physical and digital experiences. Coming up with news ticker stories that someone might see on a website in 2048 was a total blast, like “Retinal implant update introduces 5 new colors to the visible spectrum.” We also loved envisioning what fashion might look like in 2048 and 2078, and spent countless hours styling the shoes with 3-D interpretations of futuristic outfits made of light and materials that don’t exist yet.

Lighting was also a huge consideration. Everything has a glow to it, and we were heavily inspired by ’80s HUD design. Also, performance! Our team put a ton of work into ensuring the site scrolled smoothly and upheld the integrity of the adidas brand. We loved fine-tuning the wormhole to get the scroll inertia just right.

Challenges: We conceptualized, designed and developed the site, and physical installation in three weeks. This was a monumental undertaking and required an “all hands on deck” approach. We split up into a digital team and physical team to get it done. By the end, so many people at Jam3 had contributed to the experience in some way.

Navigation structure: We really wanted the site to feel like it was sucking you into a wormhole, so building on WebGL was paramount. It’s a superlinear navigation, so we wanted to create drama by adding in twists and turns into the wormhole, so you wouldn’t know what’s coming round the corner.

Using z-depth for scrolling is still a relatively uncommon scrolling mechanic, and we’d like to think we pushed the boundaries a bit further than where they were. When you leave the wormhole, there’s a tonal shift, and you change orientation. This required a lot of planning and subtle details to make it feel natural. We’re also especially proud of the 360-degree model view, as creating parallax effects that traveled circularly around the shoe was quite the design challenge for both the design and development team. 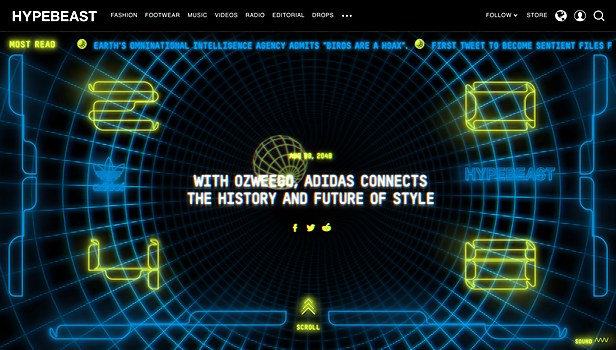 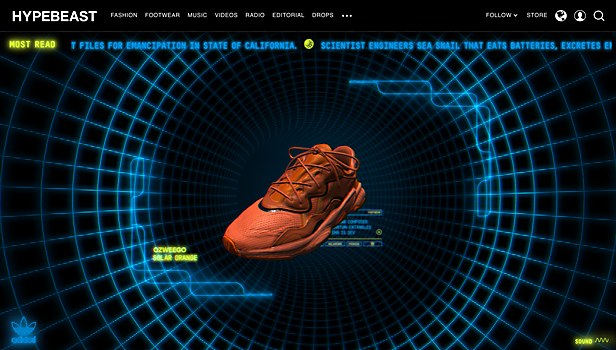 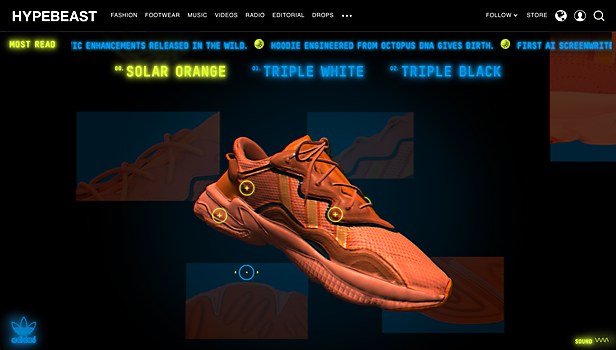 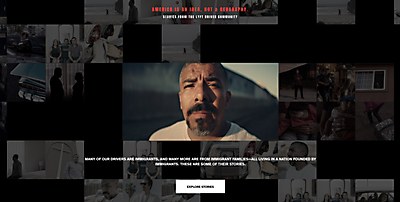 Webpicks / Politics/Social Issues
America Is An Idea, Not A Geography
Hello Monday’s site for Lyft gives a platform for immigrants to share their stories and remind us of what makes America truly unique. 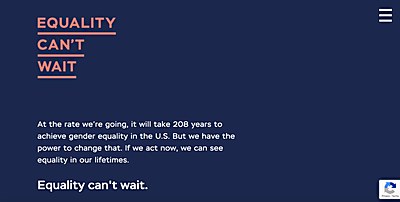 Webpicks / Politics/Social Issues
Equality Can’t Wait
Pivotal Ventures’s site from R/GA Chicago and Hedgehog draws attention to the prediction that it will take 208 years for US gender equality. 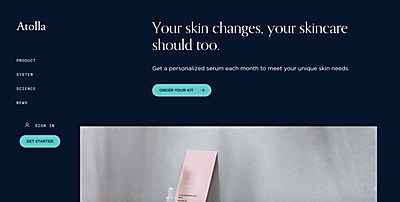