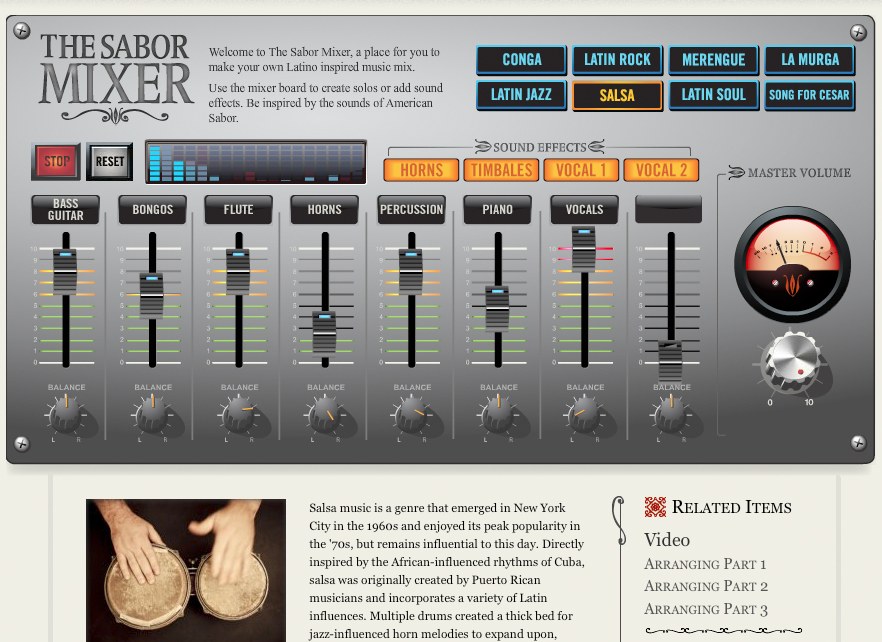 Salsa. Mambo. Rumba. Cha-cha-chá. The very names of Latin music genres suggest an irresistible, unmistakable rhythm; through the decades, Latino musicians have influenced traditional genres of music in the US, while creating their own new musical styles.

This content-rich multimedia site from the Smithsonian presents the musical contributions of US Latinos from the 1930s to the present. It serves as a marketing tool (to announce exhibition dates and public events) for the promotion of a five-year tour that will take the exhibition to small venues across the country that may not have access to easy-to-update Web sites.

Music is the heart of this site, and can be found on almost every page. Radio Sabor provides visitors with a continuous play of the Jukebox music in the background while The Mixer, a fun Flash interactive, allows the adjustment of individual instruments in a song to analyze its genre.

Available in both Spanish and English, including the classroom materials, the main content is organized by five US cities where Latin Americans have thrived since the 1930s. Most of the audio and video were recorded for this exhibition and are available exclusively on the site, including interviews with several musicians who played during the heyday of great clubs like the Palladium. In addition, music experts offer commentary on topics such as the influence of traditional Latino songs on popular musicians like the Beatles.

• The original exhibition was created by Seattle’s Experience Music Project (EMP) in partnership with the University of Washington. This smaller version of the exhibition was organized for travel by the Smithsonian Institution Traveling Exhibition Service (SITES) and the Web site, exhibition tour and related educational programs were made possible by Ford Motor Company Fund.

• The site is built in Drupal and the primary content is a large database containing 84 biographies of Latino musicians, 24 musical styles, 175 photographs and 35 audio/video commentaries.

• Because an exact match to the original exhibition font was unavailable, Interactive Knowledge decided early on to use a Web font for the page headers. Shortly before the site launched, the font house lost the rights to that font and despite a day-long search for a replacement, the distinctive typeface was not to be found. Too far into development to create graphic headers in English and Spanish, the team settled for something that blended with the overall style. Several months after the site launch another scare occurred when the font house sent an email stating they had to change how the font was coded—which required a rewrite of the CSS so the headers would display correctly.

• User-friendly private sites were created for the venues so they could easily upload their events and promotions, as well as share tips and post questions to other venues.

• Interactive Knowledge not only organized and designed the site, but also assisted in the content research and writing; this is its fifth collaboration with The Smithsonian Institution Traveling Exhibition Service. 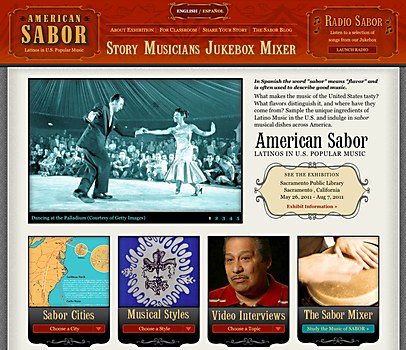 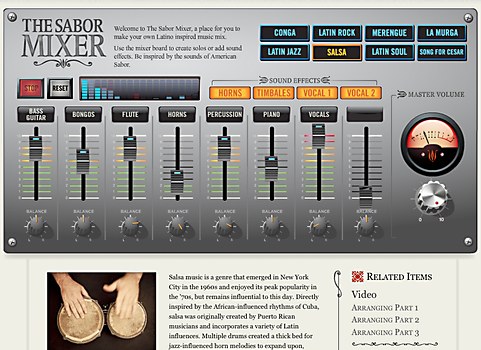 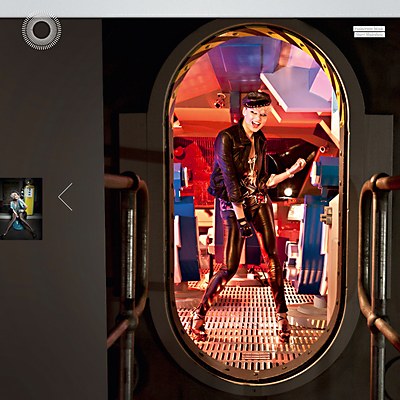 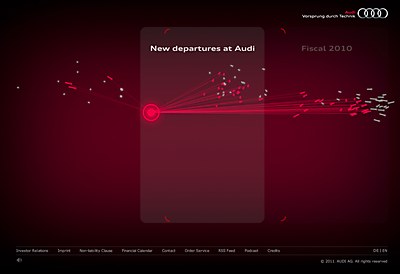 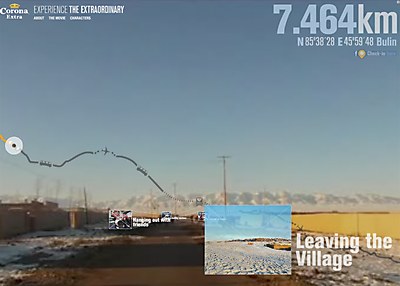