An experimental navigation system combines ease of use with the illusion of a single-page app on this design firm’s new site.

Background: The purpose of our website is to present our studio and what we do. We wanted not only to communicate these to the public and potential customers but also to other designers, design firms and communications studios. We strongly believe in networking and collaboration.

Design core: We wanted to create an impactful style, a site that could give the user who navigates it a certain experience. We like to experiment. We do not like classic conventions. We want to propose something new, and this often does not result in something like sites that pay more attention to UX than aesthetics.

The site was born on the basis of the previous one, which we had created last year. We had proposed an experimental navigation system on our old site, and during the year, we tried to understand what the weak points were so that we could make improvements.

Challenges: Figuring out how to propose a different way of navigating the site. Having a structure that worked almost like a single page.

Navigation: The homepage also serves as a navigation menu. We wanted the user to open the individual pages while always staying inside the home. Each page loads inside a container that appears superimposed on the homepage. At any time, users can close the container and quickly return to the homepage.

Technology: The site is developed by exploiting libraries such as BarbaJS, three.js and Locomotive Scroll. The scripts and animations are written in vanilla JavaScript and unlock the full potential of CSS3. 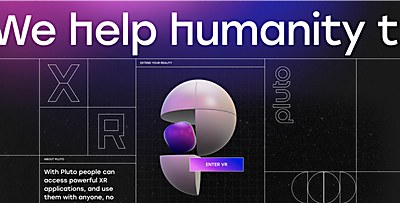 Webpicks / Technology
Pluto
For this XR-enhanced collaboration app, 14islands created a site that blooms with virtual- and augmented-reality technology.