A North Carolina–based interface designer and developer based his portfolio site’s layout on the golden ratio.

“Take something familiar, make it do something unexpected, see how people respond,” writes North Carolina–based interface designer and developer Nick Jones on his portfolio site. The same site communicates Jones’s outside-the-box design thinking with a minimal layout based on the golden ratio. As users scroll through Jones’s site, the site continually rotates for each new project, sending visitors further into a rabbit hole based on nature’s favorite number. “The golden spiral is a familiar visual form to both designers and nondesigners alike, and I always thought it’d be a great way to do a layout,” says Jones. “I realized that, by zooming from one square to the next and rotating 90 degrees, I could build an infinitely deep interface.” And the site does give visitors a taste of infinity if they go too far in the wrong direction.

As a single-page site, Jones’s portfolio features a frictionless interaction that showcases his work while encouraging potential clients to contact him. Jones intentionally kept the site’s technology unsophisticated, opting to only use HTML and CSS and not rely on WebGL or React.js. The site garnered more than 100,000 visitors in its launch week. “I always assume people will hate novelty—and there’s no denying that there’s a level of novelty to my site—but the response I’ve received was nearly 100 percent positive,” Jones says. “People were really supportive of the fact that I’m just someone trying to get exposure for my work in order to thrive as a freelance designer.” 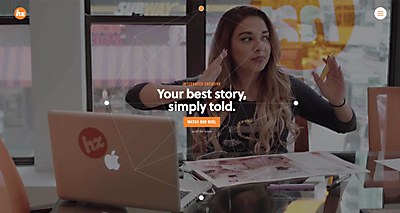