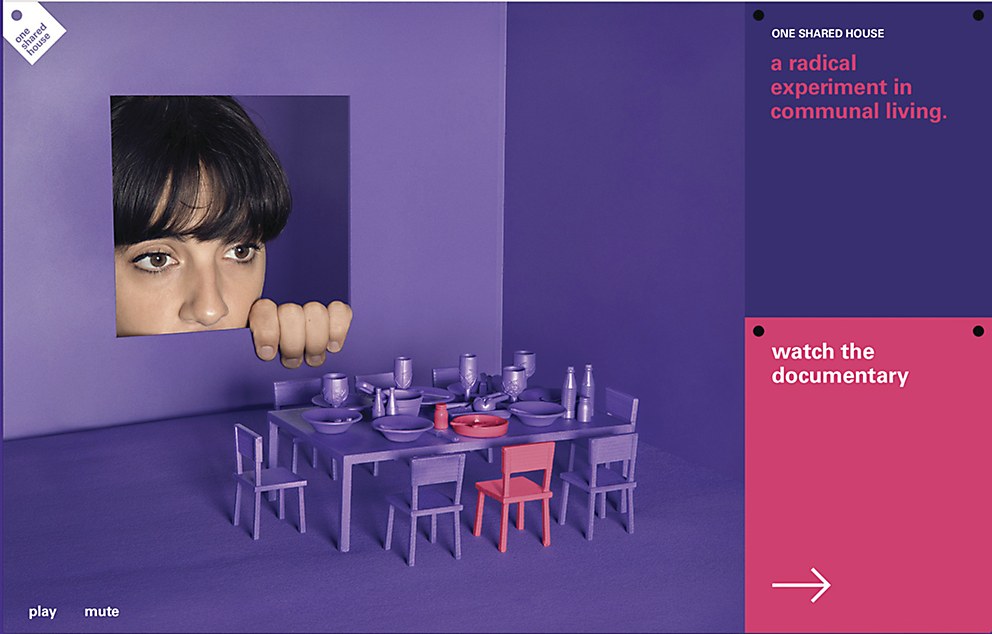 Couchsurfing. Ridesharing. Coworking spaces. These shared services have been gaining significant attention in societal discourse as a way for young professionals to combat not only the prohibitive costs of city living, but also the loneliness and isolation that can come from urban settings. Now, with services like Common, coliving has entered the social consciousness—again. As Irene Pereyra of Brooklyn-based design firm Anton & Irene can tell you, coliving is not a new concept by any means; she grew up in a shared home in Amsterdam, during a time when the city was suffering a housing crisis and ordered one percent of all new apartments to be communal. “Whenever I tell people I grew up in a communal house, we inevitably have a 30-minute conversation about the pros and cons of communal living and what it’s like to grow up in that environment,” Pereyra explains. “That is the reason we decided to do this project.”

A ten-minute-long interactive documentary by Anton & Irene, “One Shared House” explores Pereyra’s childhood in Kollontai—a shared living space named after the Russian revolutionary Alexandra Kollontai—and the nuances of coliving, featuring interviews with Pereyra’s mother and others who lived there. Since “One Shared House” is set mainly in Amsterdam, Anton & Irene decided to have the site reference Dutch graphic design with strong, geometric shapes; simple and legible modernist typefaces; and vivid, contrasting colors without texture—much like the ones used by Dutch designer Karel Martens, whose Amsterdam-based studio Pereyra and Anton Repponen visited during filming. “This Dutch style of design is not something you see often in the increasingly homogenized medium of web design,” Pereyra says. “We’re hoping to show that just because a site is online doesn’t mean it has to look and behave like every other website out there.”

“One Shared House” marks Anton & Irene’s first foray into the discipline of interactive documentary. As such, it came with a unique set of challenges. One challenge arose from transposing the documentary to different browsers, since each browser handles multiple audio channels differently; another came when the pair began figuring out how to enhance interactions with sound. “It was an incredibly tedious and precise process that took much longer than expected,” Pereyra says. “But, at least, we learned many valuable lessons for next time.” Deciding on the documentary’s interactivity posed yet another challenge. Balancing two different types of viewers—ones that would interact with the content and ones that would prefer to just watch the film—Pereyra and Repponen drew inspiration from the simple interactive elements in early video games like Where in the World is Carmen Sandiego? The documentary’s interactive elements appear at the bottom of the screen, subtly offering more content for visitors while keeping their place in the documentary. A survey at the film’s end provides another opportunity for interactivity; the site displays results from users around the world on what demographics are most likely to be comfortable with group living. “As the results from our beta came in, it was incredibly fascinating to see how we all have different levels of comfort when it comes to sharing things in our living environment,” Pereyra remarks. “Once ‘One Shared House’ went live, people from all over the world were sharing their own experiences or thoughts around communal living, which were all very personal and incredibly touching to read.”

A self-funded and self-initiated labor of love, “One Shared House” took Anton & Irene two years to complete. “We wamted to see if we could make video and animations engaging in a medium that tends to get a bad rap when it comes to long-form content,” Pereyra says. “We made ‘One Shared House’ not just for the sake of self-expression, but because projects like these enable us to experiment with disciplines and techniques for which there is typically no space in client projects. Through this experimentation, we get out of our rut and our comfort zone. We become stronger designers because of it.” 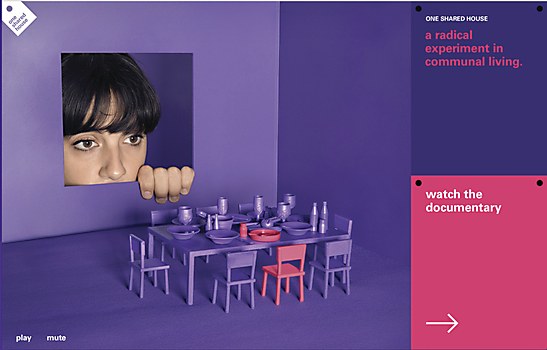 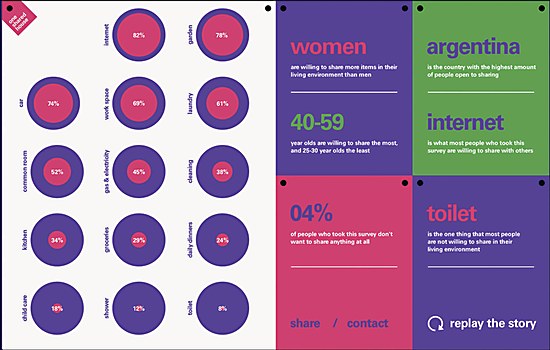 Webpicks / Art/Design
Heco Partners
This Chicago-based design duo strives for purity in its work, and its website reflects that elegantly.